Some are stony, some are rocky and some offer golden sands and crashing waves. Barley Cove Beach on the Mizen Peninsula in County Cork is one of Ireland's most amazing beaches, and truly one of the Emerald Isle's hidden gems.

Barley Cove is one of Ireland's most spectacular beaches and is found along the Wild Atlantic Way. One of my childhood stomping grounds, I spent many a summer's day building sandcastles on this stunning strand. 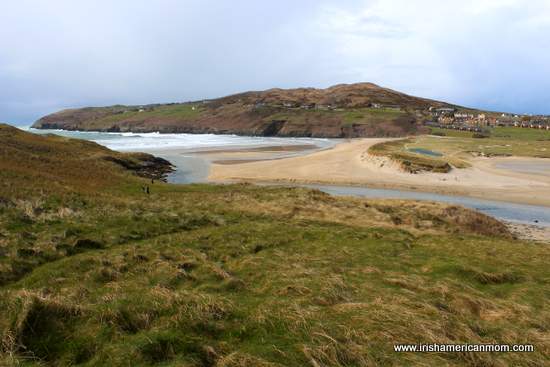 I think we all have places that haunt our memories, and Barley Cove is one such place for me.

I suppose "haunt" is not the best word to describe my mental connection with this place. I have nothing but treasured memories of summer days playing and swimming here. 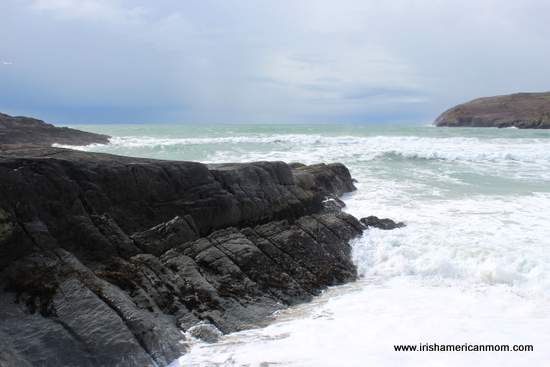 Many readers have contacted me to let me know how much they enjoy my blog posts featuring Irish scenery.

Some say they are advanced in years, and too old to ever make another trip to the Emerald Isle. Photos of Ireland help them reconnect with the land we all love. 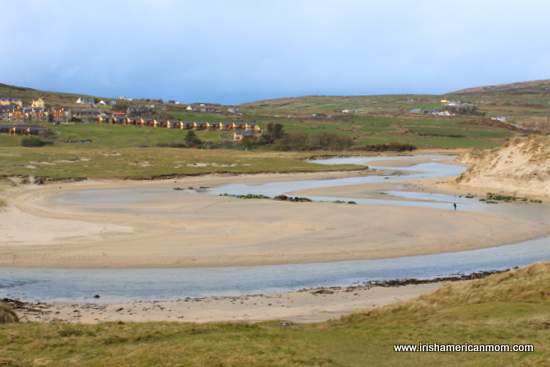 And so, today I am sharing some photos of this lovely landscape.

I took these shots in 2016, when I finally made it back to West Cork for a family break. 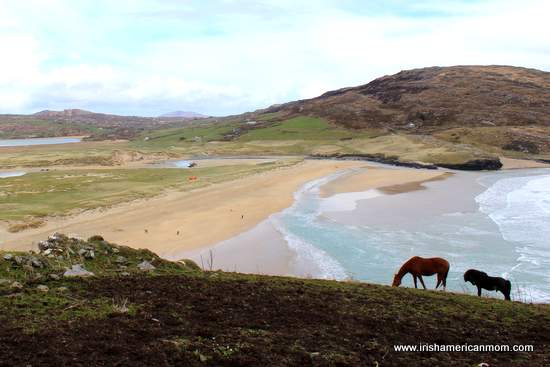 One of Ireland's Most Beautiful Beaches:

This was the first time my husband had seen Barley Cove.

Being a Donegal man, he still believes Knockalla Beach in County Donegal is the most scenic spot in all of Ireland.

I couldn't convince him to give Barley Cove that honor, but he did concede this gorgeous spot is a close runner up.

It's a winner in my book! 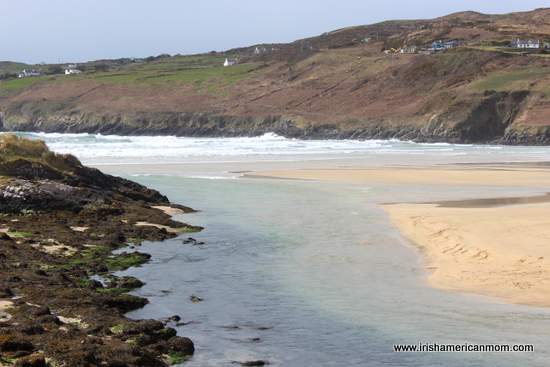 I just love this place. I consider it to be a thin place. I feel a deep spiritual connection with this amazing beach.

It's stunning, especially on spring days when sun bathers are no where to be found. 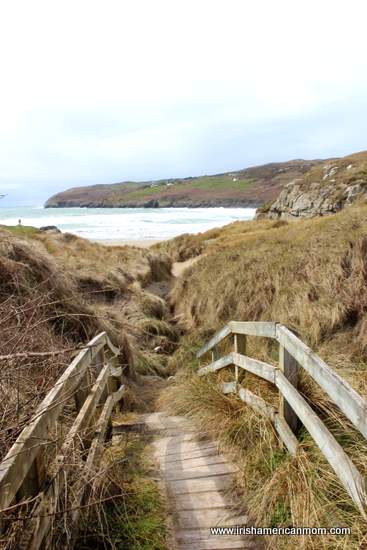 On our way to Mizen Head, we stopped at Barley Cove for a walk on the beach, a climb across the sand dunes and a crawl across the rocks to take in the surrounding vistas. Access to the beach is along a wooden board walk.

Now this pathway is not even and smooth like the kind you might find on the Jersey shore. No! This is Irish style beach access. Wild and untamed. A little dangerous and not for those with rickety knees.

But oh boy, is the climb down this rampart so worth the effort. 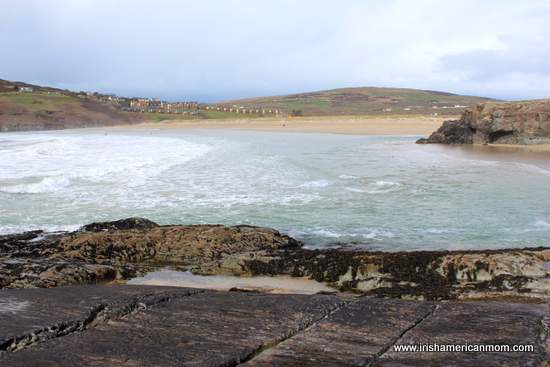 A Beach on the Mizen Peninsula:

Barley Cove is not far from Mizen Head, the most southwesterly point in Ireland.

It's located on the very same peninsula aptly named the Mizen peninsula. Or if you're a local, you simply say "The Mizen."

Barley Cove is out west on the Mizen! 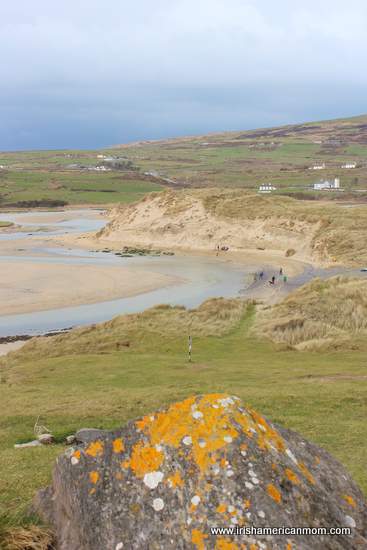 A Beach Formed By A Tsunami:

Barley Cove did not look like it does today in the early 1700's.

Believe it or not, these magnificent sand dunes were created by a tsunami in 1755.

On November 1 that year an earthquake was recorded in Lisbon, Portugal, causing a large tsunami in the Atlantic Ocean which reached all the way to Ireland. 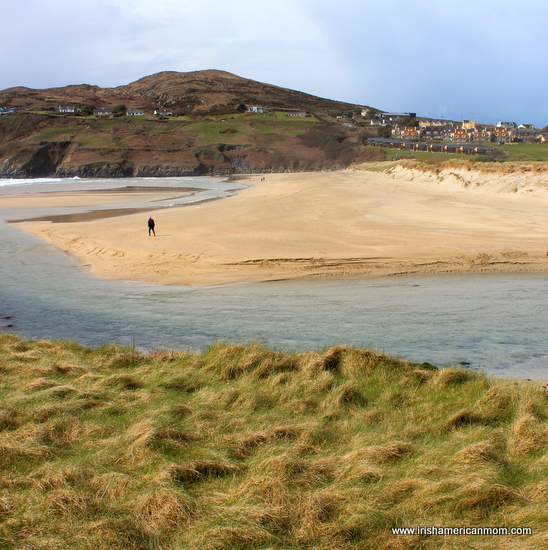 The magnificent sands of Barley Cove were washed onto the shores of the Mizen Peninsula.

And the tsunami's gift of sand dunes remains to this very day. 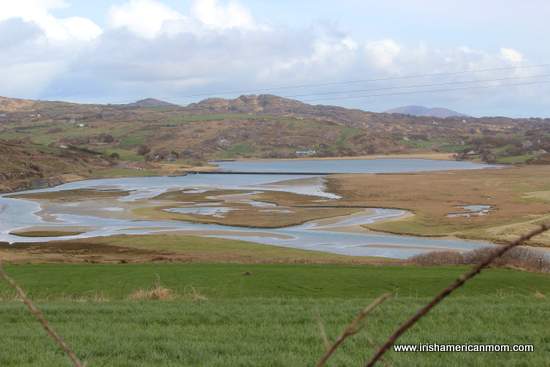 This beach is recognized by many as one of Ireland's finest beaches.

In fact, it probably is one of the world's finest beaches.

Barleycove is way off the beaten track, over 70 miles from Cork City or any other major population center. It's definitely on of Ireland's hidden gems.

This lovely beach is never overcrowded, even at the height of a warm Irish summer. 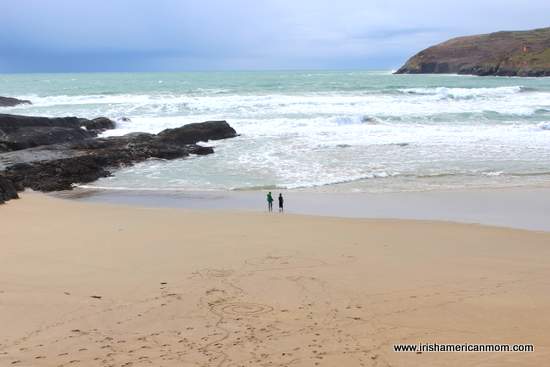 My kids look so small on the sand, standing by the water's edge, dying to jump in and get wet.

Not advised on a spring day in Ireland. Even in the height of summer the Atlantic waters still have a little cold sting when ocean swimming.

And always remember to be careful on Irish beaches. The currents around Barley Cove can be quite dangerous, so never swim too far from the shoreline. 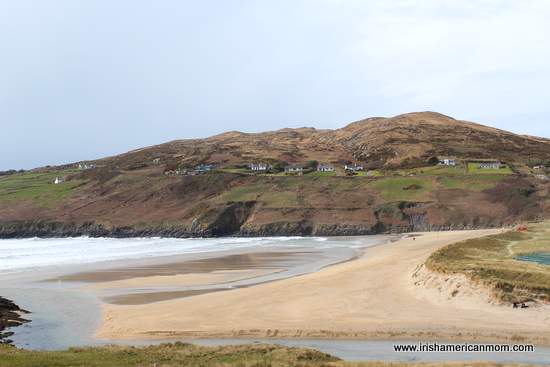 This is my Ireland - the land of my ancestors, and it's this landscape that is the setting for the novel I am currently working on.

This beach inspires my writing. 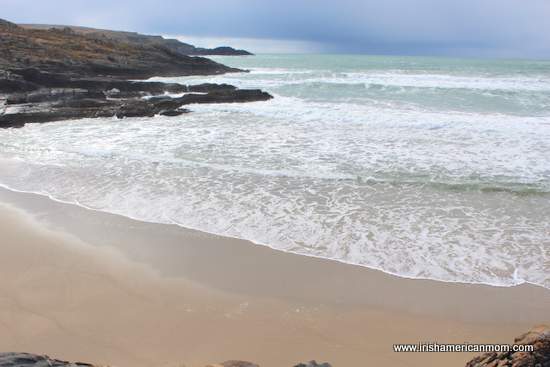 Excerpt from My Novel Set in West Cork:

Here's a little excerpt from a scene I set on a beach in West Cork. Barley Cove was the backdrop in my mind's eye.

Set in 1844, my heroine Noreen is illegally gathering seaweed on the shore before dawn, when a strange horseman joins her on the beach. Here's how I describe her retreat ....

"Oblivious to the bracing ocean spray, gradually soaking her homespun skirt, Noreen trudged across the sands as the salmon-streaked light glided westward toward the still darkened, watery horizon. The chill, new, primrose light of day brightened the rocky cliffs, illuminating the winding path leading to the land above. It polished the waves, breaking by the mouth of a shoreline cave, a gigantic, inky gouge in the rocky cliffs.

Glancing over her shoulder, she rechecked her beachside companions. The horse's head bobbed in rhythm with his trotting feet. The rider braced his thighs against the animal's quivering back muscles, the stallion's streaming tail skimming the lacy wave tops. This stranger nudged his horse to splash unflinchingly through the waves nipping at his knees. Horse and rider never veered toward safety.

Steadily, Noreen reached the winding cliff path. Girl and donkey plodded homeward, straining up the steep incline. Stopping to catch her breath, she turned for one last look at the beach below.

A high-pitched trill echoed through the air. Searching the shoreline, she spotted the black horse, riderless, yet prancing at the mouth of the gaping cave. A white capped roller broke against his hooves, submerging them in a sea of white, lacy bubbles. The stallion pawed the soft sand, as the wave retreated, then twisted his neck in a flurry of mane. A lone riding boot dangled from one stirrup...."

~ Excerpt from my novel, Daughter of the Fields. 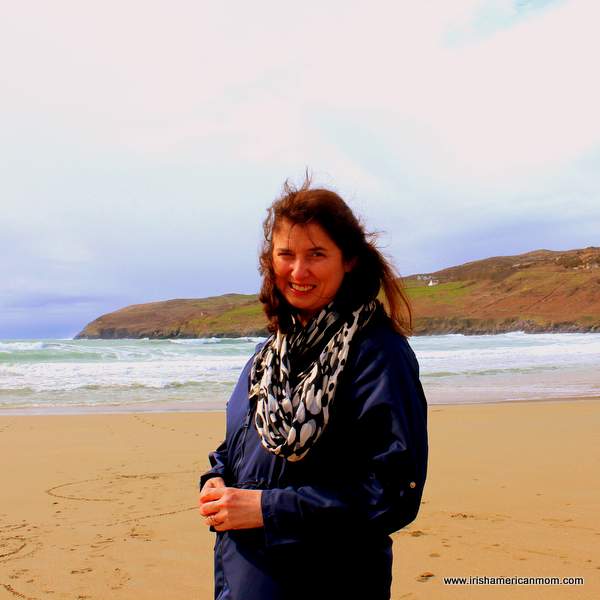 Thanks for taking a look at Barley Cove with me today.

My walk on this glorious windswept Irish beach resulted in an inevitable bad hair day.

I hope you enjoyed this quick photographic tour of Barley Cove.

Wishing everyone happy trails in Ireland this summer.

Here are some more recipes and ramblings you might enjoy: