Irish famine memorials are found all over Ireland and in many corners of the world, especially places to where the Irish fled to escape starvation.

On Toronto's waterfront you will find a poignant tribute to Irish immigrants, who made the harrowing transatlantic journey to Canada to escape starvation and disease during the Great Irish Famine of 1845 to 1850. 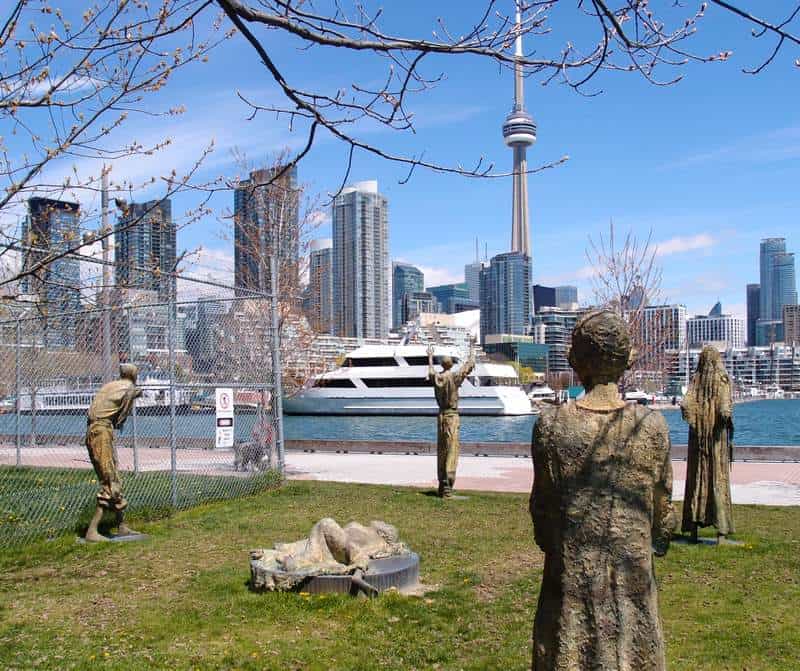 When we think of Irish immigration to North America we may initially recall those who made the arduous journey to the United States, but many more crossed the Atlantic to Canada, where landing regulations were far less stringent than in America.

Here are some interesting facts: 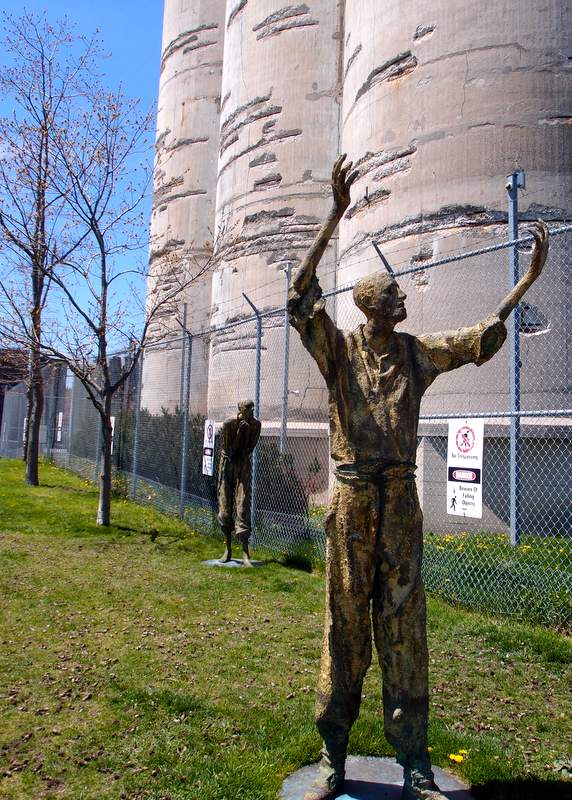 The Irish Arrive in Toronto:

In the summer of 1847 a mass influx of immigrants came to Ontario, with a total of 38,560 Irish Famine survivors arriving in Toronto from Ireland, at a time when the city’s population was just 20,000 strong.

With each passing day during the summer months, hundreds more Irish migrants arrived in the city of Toronto putting increasing pressure on the city's health services to meet the needs of these seriously ill and impoverished people. 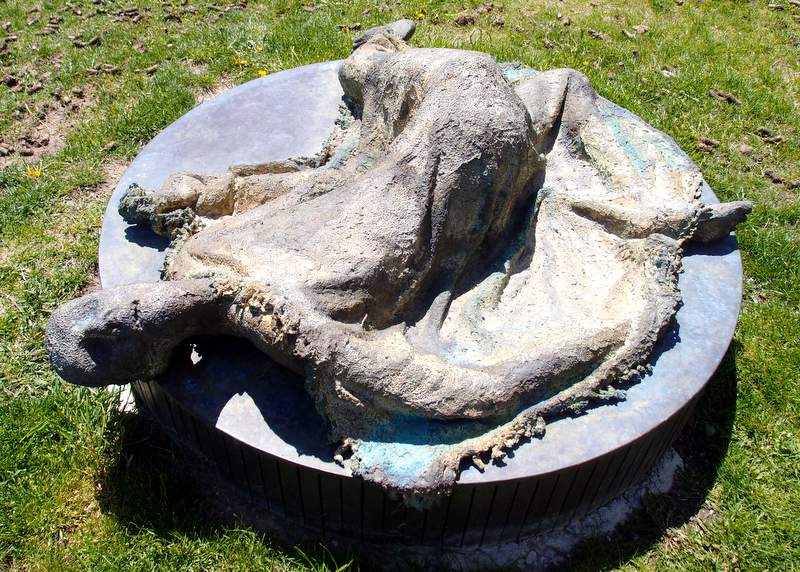 The calamity grew worse when Dr. George Grasett, the chief medical officer at the Emigrant Hospital, died of fever in July. New sheds to house the immigrants were under construction, but when workers started to fall ill from fever they downed their tools. 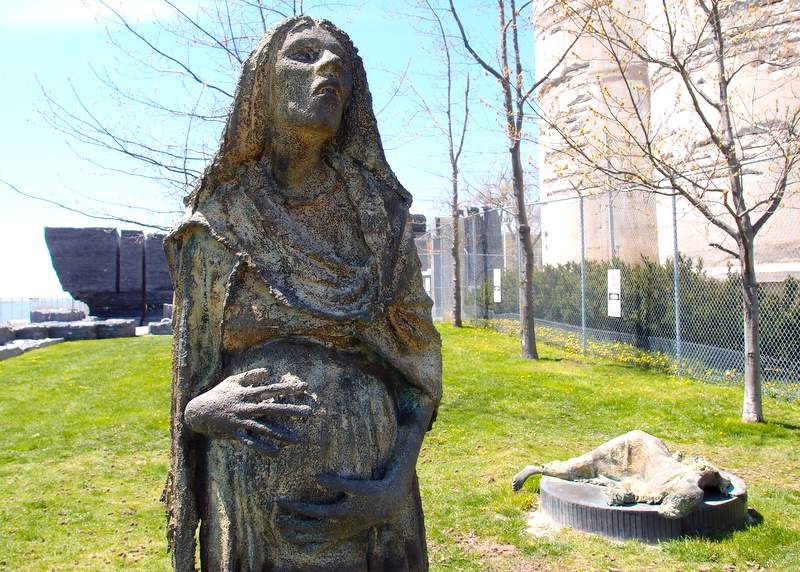 Ireland Park was created as a Famine Memorial on the waterfront in Toronto.

Here is how it is described on the Ireland Park website ....

"Ireland Park is a centre for reflection, contemplation,

and recognition of the past and the possibilities for the future." 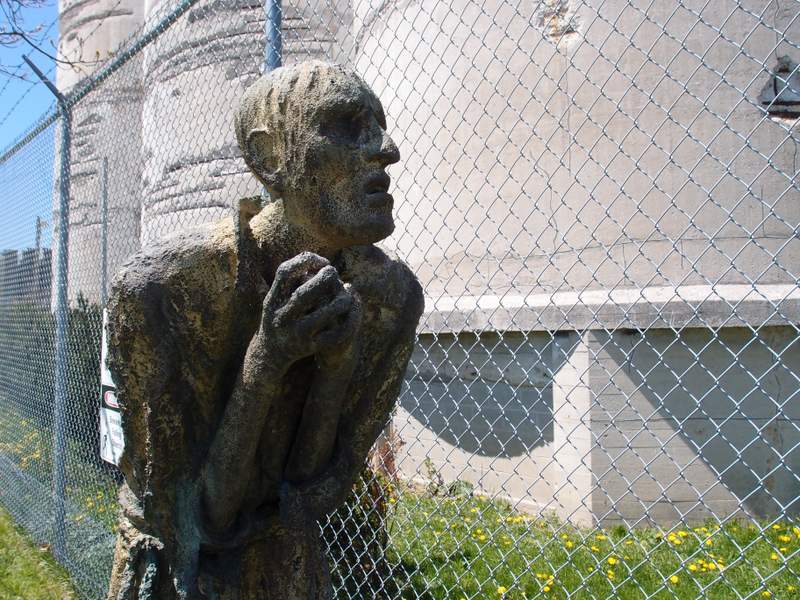 In 1997, on the 150th anniversary of the Famine, the Irish sculptor Rowan Gillespie, unveiled his ‘Departure’ series of famine sculptures, which are located beside the River Liffey in Dublin.

These deeply moving statues in Dublin inspired Canadian, Robert Kearns, to invite Rowan Gillespie to create a new group of sculptures to be located on the Toronto waterfront. These Canadian sculptures depict the arrival of the Irish immigrants from Dublin in Canada.

The adjacent Canada Malting Company grain silos tower over the northern side of the memorial, creating an artistic contrast between the hungry plight of the immigrants and the old grain repositories, symbols of abundance. 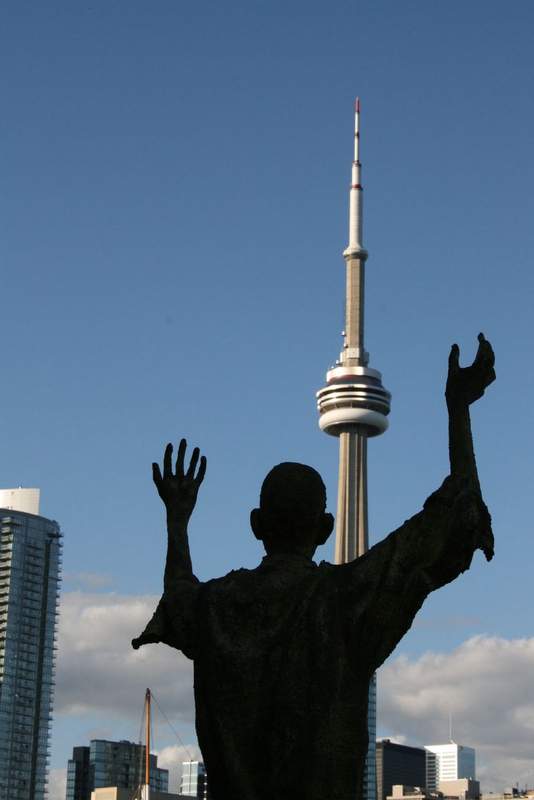 This wonderful historic tribute creates a poignant artistic connection between Toronto's waterfront and the banks of the River Liffey in Dublin. 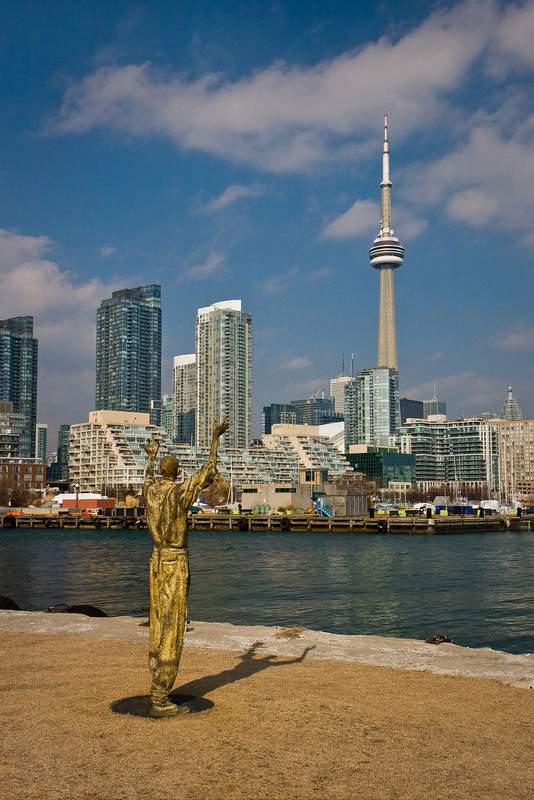 It is important to note that a total of seven sculptures stand on the dockside in Dublin, but this number is reduced to five on the Toronto waterfront.

This bears witness to the tragic loss of life in coffin ships crossing the North Atlantic, and in fever sheds erected on the island of Grosse Isle, Montreal and on the waterfront in Toronto. 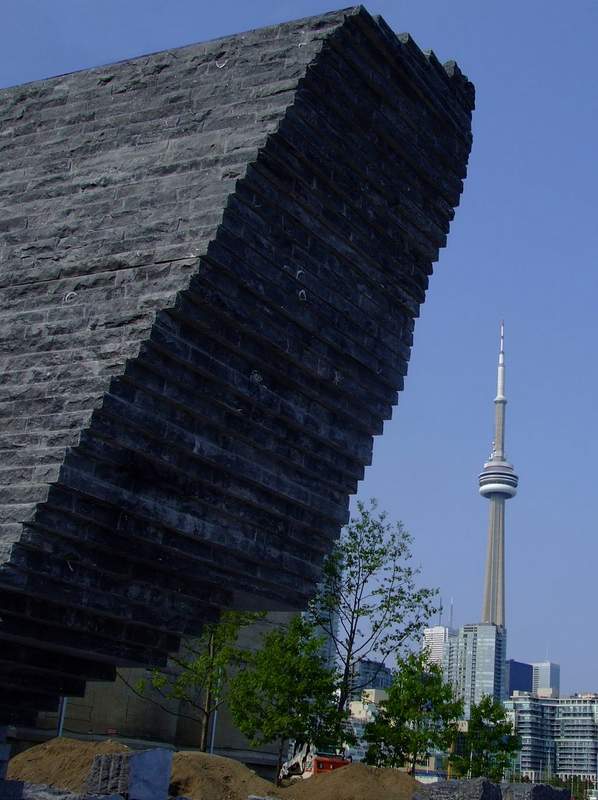 Bathurst Quay, where the memorial is centrally located on the Toronto Waterfront was renamed Eireann Quay.

Despite being centrally located in a bustling city, Ireland Park is a contemplative place, designed to allow visitors embrace the solemnity of this emotional and heartrending memorial .

The park was designed using stone to represent a bare and craggy landscape like that found in the west of Ireland. 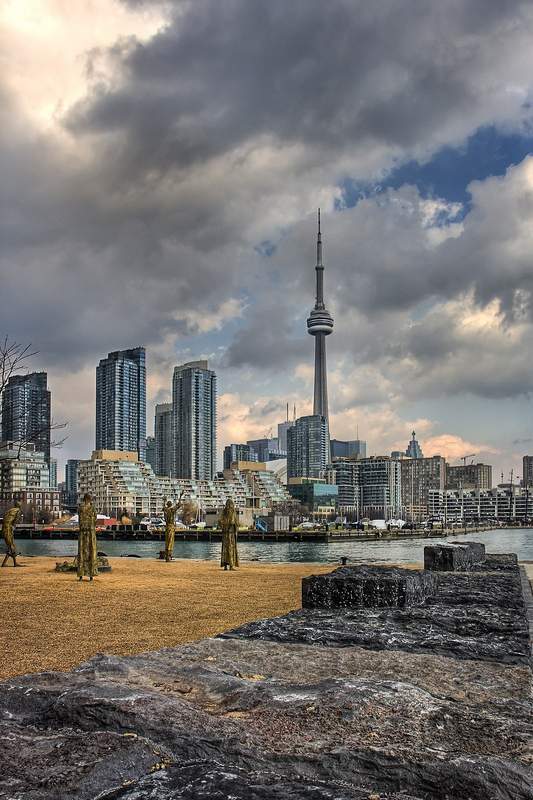 This is a stirring, emotional and evocative place.

It is a tribute to all those who made the voyage to a new land and visitors are called to remember their destitute ancestors arriving on Canadian shores from a ravaged land. 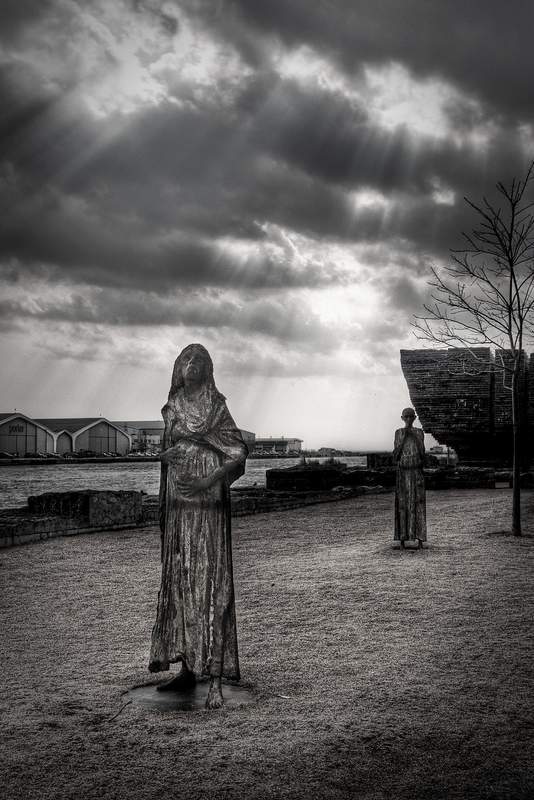 From devastation, hope was born again in this new land.

The sculpture of the 'Irish Madonna' beautifully depicts these sentiments.

Con O'Connell wrote the lyrics to a beautiful song called Ireland Park - Hallowed Ground, a tribute to the 38,000 starving famine victims who descended upon Toronto in 1847.

Congratulations to the people of Toronto for creating a lasting legacy for their descendants to help share the history of Irish migrants to their city.

I hope Ireland Park will inspire migrants of every nationality and visitors from all over the world for years and decades to come.

Many thanks to a reader from Toronto who gave permission for these photos to be used in this blog post, and for sharing the name the 'Irish Madonna' for the sculpture of the pregnant Irish woman.

I am also grateful to Con O'Connell for giving me permission to share his song through YouTube.

Many thanks also to the photographers who shared their works on Wikimedia under a Creative Commons License, allowing me to use their photos with credit on this website.

If you have photographs of another famine memorial in Ireland, America or around the world we would love if you would share them with us here in the Irish American Mom Community. You can upload your photos here.