In today’s post we’re going to learn about The Dermot O’Hara series of detective books set in the beautiful southwest of Ireland.

The Belfast born author writes under the pen name Michael McDonnell and today tells us how a vacation in Ireland inspired a whole series of books. And so I hand you over to the author ….

How Ireland Inspired My Writing …..

One question writers get asked a lot and for which there is rarely a precise answer, is….

“Where did you get the idea for a certain novel?”

I’m fortunate in that I can pin down the exact time and place when the idea emerged for a series with a laid back Irish detective at its heart. 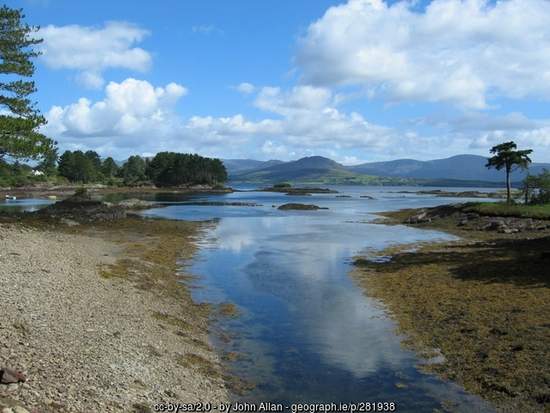 Rossdohan on the County Kerry coast

We were staying at a B & B (bed and breakfast) close to the town of Kenmare on the stunningly beautiful coast of Kerry, when the central character made his first appearance.

The real version was a genial Garda officer who, with his wife, ran the guesthouse as a sideline.

As we talked to him, it became clear that fishing was this policeman’s real passion and upholding the law something he squeezed into his busy angling schedule (I hasten to add that Kenmare is a peaceable place and our host was not neglecting his duties)!

A few days later, at Renvyle on the west coast, the weather had closed in. Gales lashed rain against the windows of our hotel as we watched from the comfort of two armchairs either side of a roaring fire.

My wife and I talked about Kenmare and I imagined what might happen if our easy going Garda officer was confronted by real and serious crime.

A few pages of scrawled notes later and the first Dermot O’Hara novella, ‘Thicker Than Water’, was born.

One year after that a full length sequel, ‘Banshee’ arrived with a broader range of characters and a more complex plot. The third Dermot O’Hara Mystery, again a full length novel, will be available in Spring 2016.

I publish the novels on Amazon under the pen name, ‘Michael McDonnell’. It has been a rewarding experience with readers responding positively to my writing. I think the review that pleased me most was the one that read ….

“This quality of writing, combined with a terrific plot,
draws you in to the point that you are no longer
reading the book, but are observing
the story unfold from a corner of Crowley’s bar!”

The first book in the series is called Thicker Than Water. 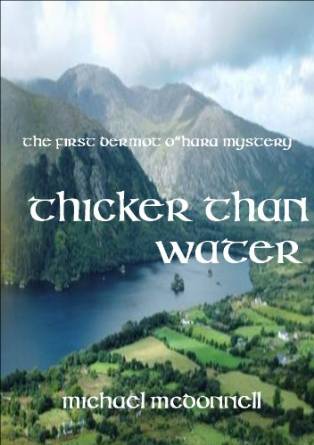 Here’s the introduction found on Amazon …

“Dermot O’Hara is a policeman in a small Irish town where his greatest challenges are lost library tickets and how to find more time to fish. This peaceful life is upended when death comes to town. And not just any death. O’Hara’s career is on the line as the corpse of a US Senator is found. The Senator, while searching for his ancestors, has uncovered an old, still burning hatred from the time of the Great Famine. Dermot needs all the help he can get to solve the crime but as he starts to unravel the mystery it becomes clear that those around him are not what they seem. This first book in the series introduces us to Dermot, his long suffering wife Jo and his disreputable friends in the local bar.” 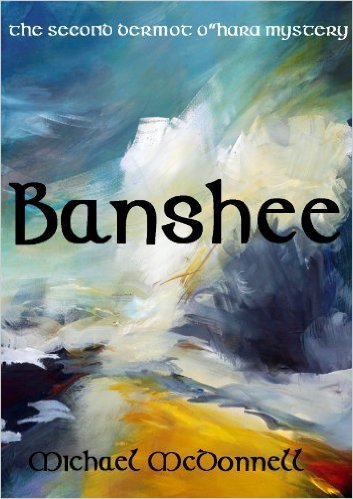 The second book in the series is Banshee. Here’s a little introductory blurb ….

“When Peter Foley’s fishing boat sinks in the waters off the coast of Ireland, a lethal secret is revealed. Local superstition claims that when death is imminent supernatural forces manifest themselves and the Banshee sings. New passion is born but an old ghost and past sins emerge to torment Dermot and threaten his cozy existence. All the police officer’s detective skills are called on to solve the mystery and save his town. So great are the dangers that even the love of his wife and the loyalty, humour and friendship of the regulars in Crowley’s Bar, appear inadequate against the forces opposing them. A colourful cast, from former FBI man Frank McMahon, who could happily live on a diet of Irish stew and Black Bush whiskey, to the journalist known as ‘the Beast’, populate the pages of this romantic Irish thriller.”

Thank You To Michael McDonnell:

A big thank you to the author for sharing his books and writing inspiration with us today. Wishing him every success with the third book in the series, which is due to be published soon in spring 2016.