Irish Famine Pots are giant cast iron vessels, which were created to cook large volumes of soup to feed the starving Irish in 1847, the bleakest year of Ireland's Great Hunger, now known as 'Black 47'.

Mattie Lennon, a reader of my blog, and an avid Dublin folklorist, poet and author, contacted me to let me know about a project currently underway to preserve these old pots. The idea is the brain child of a Donegal man, John Cassidy.

But before I hand you over to Mattie, to tell us about their amazing work, let me fill you in on a little bit of history behind these pots, and their significance as a link to our Irish cultural heritage.

The failure of the potato crop first affected the Irish in the autumn of 1845, and by 1847 Ireland was a country of homeless, starving paupers.

Prior to 1847 famine relief was provided through employment schemes. Recognizing the need for farmers to be free to work the land, the British government abandoned the work schemes, and replaced them by providing the starving Irish with 'soup' through the Soup Kitchen Act of January 1847. 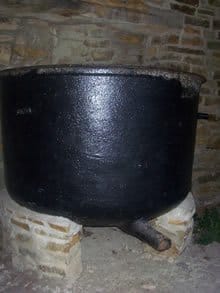 Soup was cooked in large cast iron cauldrons which have come to be known as famine pots, soup boilers or workhouse pots.

These durable pots were made in a Quaker iron foundry owned and run by the Darby family in Coalbrooke in the Severn Valley of England. 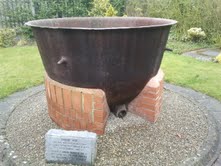 Initially 600 of these durable cost iron pots were supplied by the British government.  An additional 295 pots were provided by the Society of Friends or the Quakers.

The Society of Friends demonstrated incredible generosity during the Famine. Hiring ships to bring food, medicine and supplies, they are credited with saving many lives.

Soup was made in the famine pots using a variety of recipes or  from whatever scraps the people could afford. 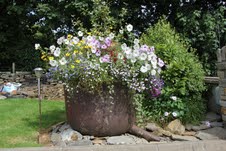 Nettles and wild herbs were added. The nutritional value of these soups was very questionable. Many soup recipes were lacking in nutrients, vitamins, and minerals, and over time gave rise to scurvy and other diseases.

Some were so thin or watery they caused intestinal ailments such as diarrhoea.

However, no matter how deficient these soups may have been nutritionally, a bowl of watery soup was sometimes all that stood between a poor Irish person and death. 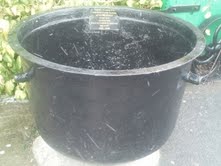 Many of our ancestors stood in line with an empty can in hand, eager to have it filled with soup, brewed in these famine pots.

No matter how degrading it may have been for them to join the line of impoverished Irish men, women and children, this soup was a last resort to help quell the pangs of their empty stomachs.

These pots tell an important story from our past. 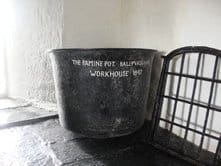 However, despite the desperate need of the Irish people for this soup, instructions were issued by the English to discontinue the services of the soup kitchens.

By October of 1847 all of the government soup kitchens had closed. The Irish were expected to live off the new potato harvest, which was ready to be picked in autumn of 1847.

Unfortunately this harvest was merely one quarter of a normal Irish potato harvest, and the three million people who depended upon the soup kitchens for survival were left to fend for themselves.

In 2011 John Cassidy found an old famine-pot, broken in pieces, in south Donegal, had it welded, restored and mounted outside Leghowney Community Hall.

Such was the interest shown by American tourists that he decided to do some research on the whole Famine-pot/Soup–kitchen aspect of the famine. 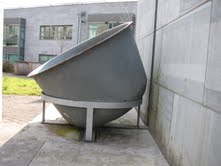 As I had worked with John on other projects he asked me to come on board for this one.

We found that because of bigotry, pride, misguided patriotism and inherited false information,this aspect of the potato failure was almost air-brushed from our history.

Here's a little video of John Cassidy explaining this project ....

In conjunction with An Lár TV we are now making a documentary on the subject.

We have all the raw footage and are now in need of funding for editing.

This doumentary will be broadcast by on An Lár TV which reaches the Irish Diaspora in more than 120 countries around the world including Irish groups and clubs from the US, Canada, Spain, Switzerland, South Africa, Australia, and New Zealand.

Here's a list of some of these clubs and groups ....

The target market for this documentary is Ireland and abroad, mainly the USA.

We are also  hoping to get the documentary into schools in Ireland and around the world.

A Note From Irish American Mom:

You can also learn more about Mattie and read some of his writings and poetry on his own personal website.

A big thank you to Mattie and John for undertaking this ambitious and culturally significant project. I look forward to viewing this documentary and hope the will keep us posted on their progress and dates for release of the film. 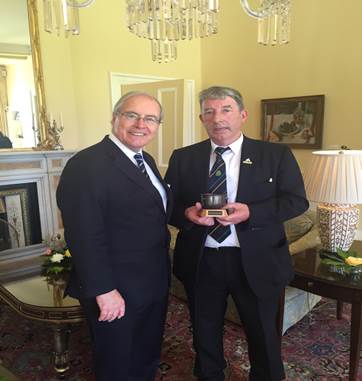 The photo above shows John Cassidy presenting a miniature famine pot to Mr. Kevin O'Malley, U.S. Ambassador to Ireland at his residence in the Phoenix Park, Dublin.  The Ambassador's ancestors emigrated from County Mayo, one of the worst affected areas during the Great Irish Famine.

John was invited to a tree planting ceremony to remember the 15th anniversary of 9/11. The original tree was found in the basement of one of the towers. It was nursed back to full health and was replanted at Ground Zero. One of its stems was flown to Ireland and was planted at the Ambassador’s residence in the Phoenix Park in September 2016.