Ireland’s many lighthouses are located in some of the most magnificent, unspoiled, and scenic places on earth. The earliest beacons were simply bonfires built on cliffs to warn passing ships. Today Ireland’s coastline is guarded by numerous 19th century lighthouses. 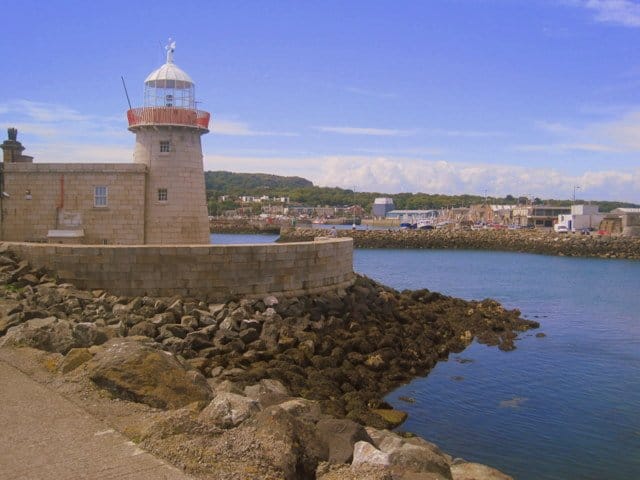 Today I plan to share a compilation of lighthouse pictures from the Emerald Isle, whose rugged coastline has long posed unseen dangers to passing ships in the night. 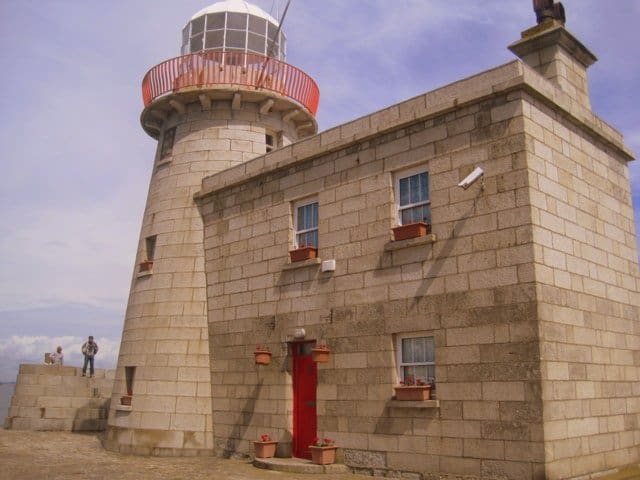 This week, as the world commemorates the 100th anniversary of the sinking of the Titanic, my mind turned to lighthouses and the important job they do guiding ships past treacherous terrain. 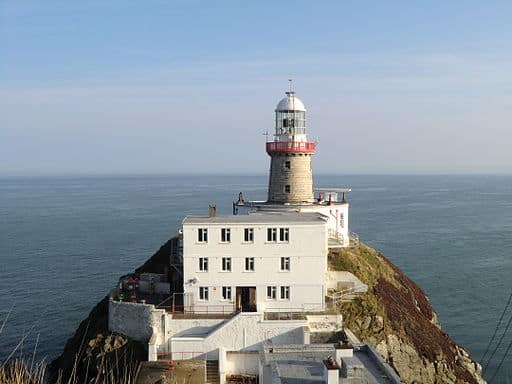 The lighthouses of Howth bring back lovely memories of childhood walks along the cliff paths and pier on this hilly outpost on the edge of Dublin Bay. 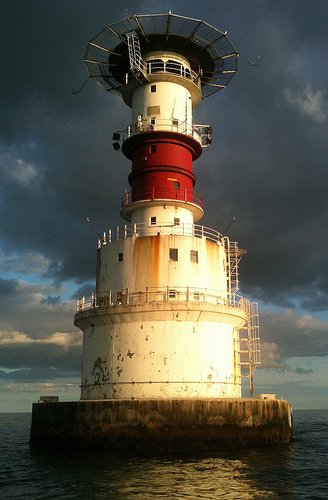 On a clear day the Kish Lighthouse can be seen from the top of Howth Hill, far out in the waters of the Irish Sea. On foggy nights its plaintive honking penetrated thick, coastal hazes. 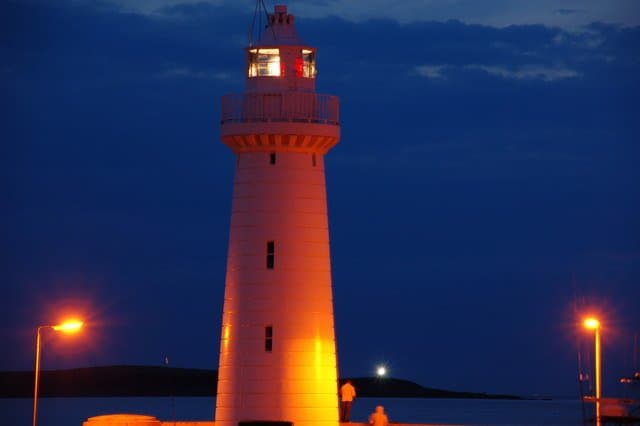 Ireland’s coast is dotted by large lighthouses, once occupied by solitary workers. They are now empty, with GPS technology replacing some of the invaluable guidance work of years gone by. Yet, these beautiful buildings are part of our history. 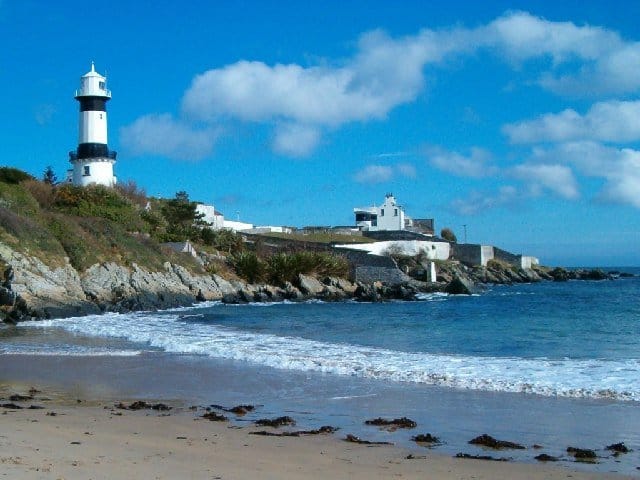 Today all of Ireland’s coastline lights are controlled from a central location in Dublin by the Commissioners of Irish Lights. 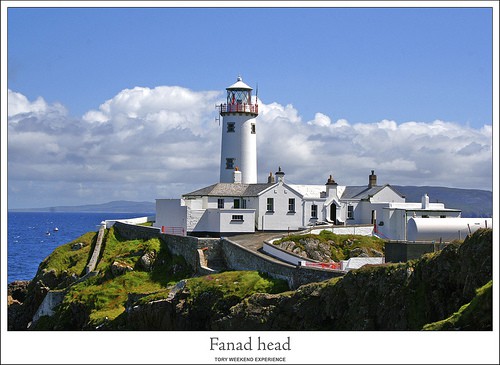 Irish waters have seen more than their fair share of ship wrecks. The Irish coastline is full of myth and legend of famous and not-so famous maritime disasters.

Although the Titanic sank a long way away from Ireland’s shores its ties to the island are strong. Built in Belfast, its last stop before sailing into the Atlantic was in Queenstown Ireland, now known as Cobh. As the world’s most famous civilian maritime disaster, analysis of the disaster has contributed significantly to today’s sea faring safety procedures. 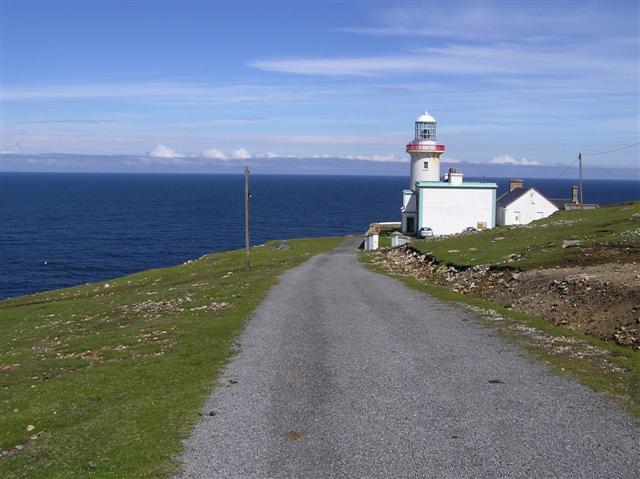 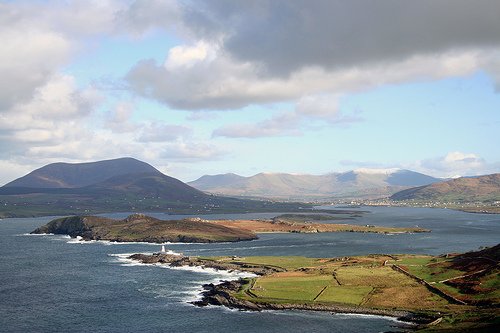 I love the photo above, taken from Valentia Island, Co. Kerry. The photographer did an amazing job capturing the vast scope of the landscape. Although the lighthouse appears small and insignificant by day, the jagged coastline underscores its importance as a nighttime safety beacon. 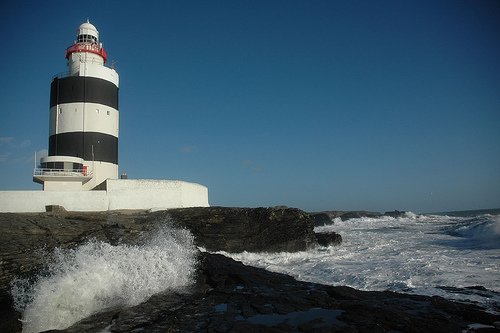 Hook Head, in County Wexford, is Ireland’s oldest lighthouse, dating back to Norman times in the 12th or 13th century. Painted in distinctive black and white bands, the impressive cylindrical tower has housed many forms of warning signals over the centuries. In early times lanterns shone and bells pealed, to be replaced by warning cannon and coal gas fires in later centuries. Today remotely controlled electric beacons guide shipping away from the nearby rocks. 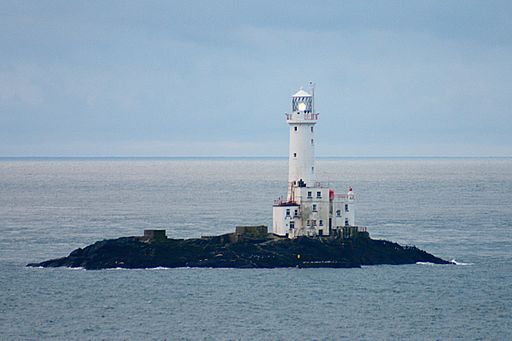 As a child growing up in Ireland the names of distant lighthouses grew familiar as weather forecasters referred to nautical conditions reported from these outposts. Fastnet Rock, Valentia Island and Tuskar Rock sounded as if they were just down the road from Dublin.

In years to come modern technology may make Ireland’s lighthouses obsolete. I hope when that day comes, these symbols of hope, safety, caring and God’s guiding light will be preserved for future generations.