Brussels sprouts make an annual appearance on many American Thanksgiving dinner menus. Some people love them, and some people detest the very sight of them.

If, like me, you grew up in Ireland, then Brussels sprouts made a far more frequent appearance on your dinner plate, than just once a year on the fourth Thursday of November. In fact, I could safely say that during the winter months in Ireland, I ate Brussels sprouts at least once per week. 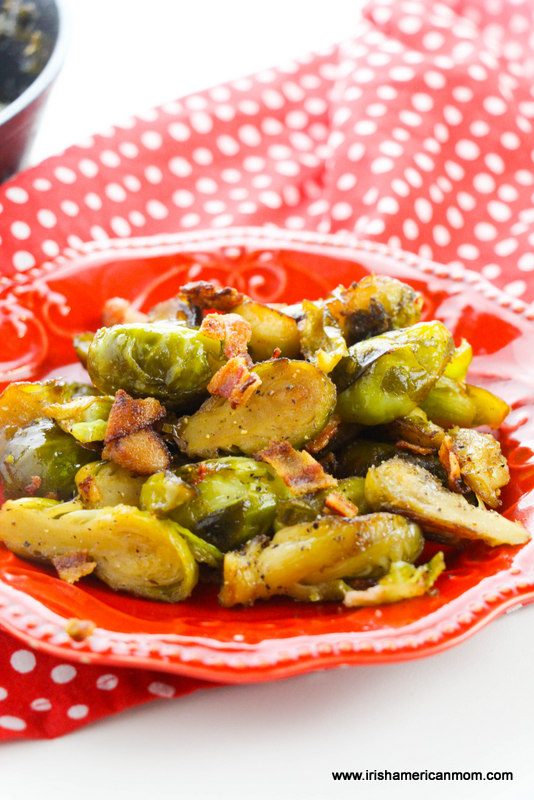 Yes! I confess. I'm a Brussels sprout eater. I actually like these little balls of green, leafy goodness.

However, the Brussels sprouts of my childhood were usually just boiled, then strained and served with a little melting butter.

In recent years I've experimented with my Brussels sprouts and learned to pan fry them, to make them extra delicious.

My Irish mother ensured I acquired a taste for Brussels sprouts, simply by refusing to take them off my plate every time she served them when I was a little girl growing up in Dublin.

She was determined to turn me into a good veggie eater, and she was definitely not a mother to cater to whims and special dietary requests. You ate what was put on your plate, and Brussels sprouts appeared at least weekly during the fall and winter months of my Irish childhood.

I think some Irish mom in centuries past discovered that brussels sprouts, just like cabbage, are a perfect match for bacon. When I was young I called them "small cabbage balls."

As members of the brassica family they belong to a category that includes cauliflower, broccoli, cabbage and mustard greens. They're also known as cruciferous vegetables.

They're not widely praised for their general likeability - and I think it really is a case of either loving them or hating them. I think it's the slightly bitter taste of these sprouts that puts some people off. However, I hope this recipe will take the humble sprout beyond a bitter, detested category of dinner vegetable.

The key to this recipe is to impart the smoky, meaty goodness of crisped bacon, with a sweet hint of maple syrup into the bargain. This sweet and savory combination creates a skillet sprout recipe that diminishes the bitter bite of the Brussels sprout, and takes it to a different level of semi-nutritious goodness (Well, kind of nutritious - adding crispy bacon probably doesn't exactly add to the nutrition profile of this dish).

Anyway, if you're trying to convert your family to eating sprouts, then perhaps this recipe will give you a small chance of creating your very own Brussels sprouts fans.

And so, without further ado, let's get cooking our sprouts. 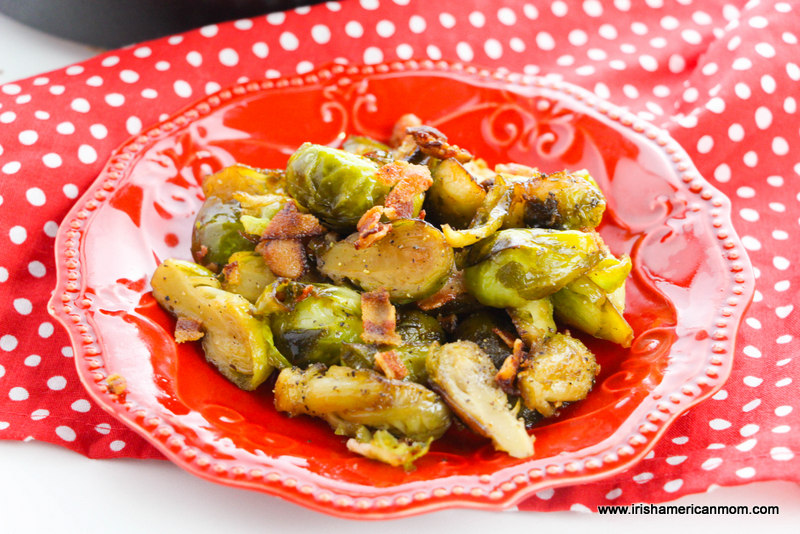 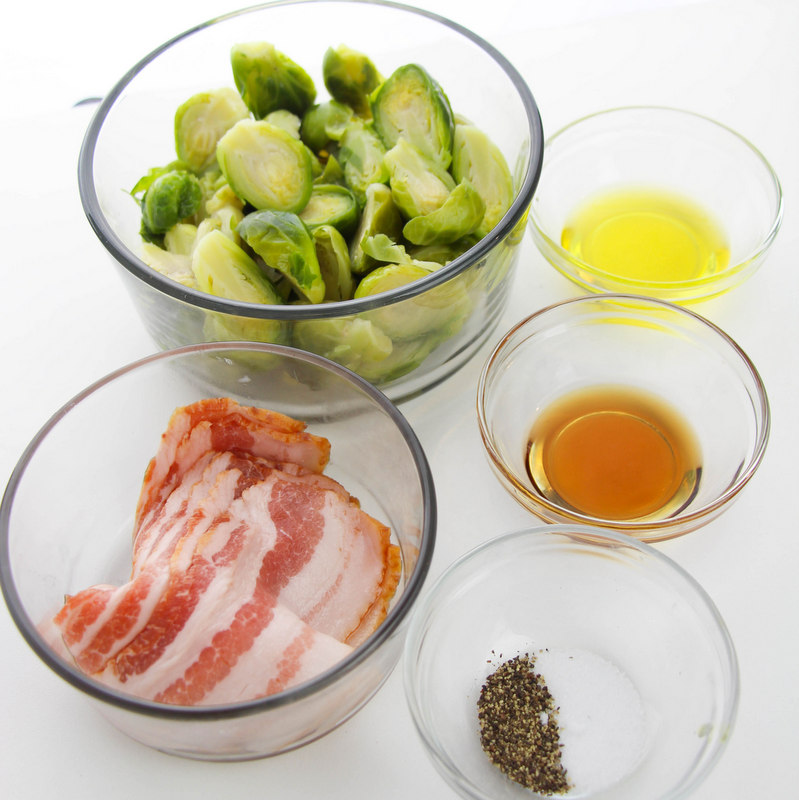 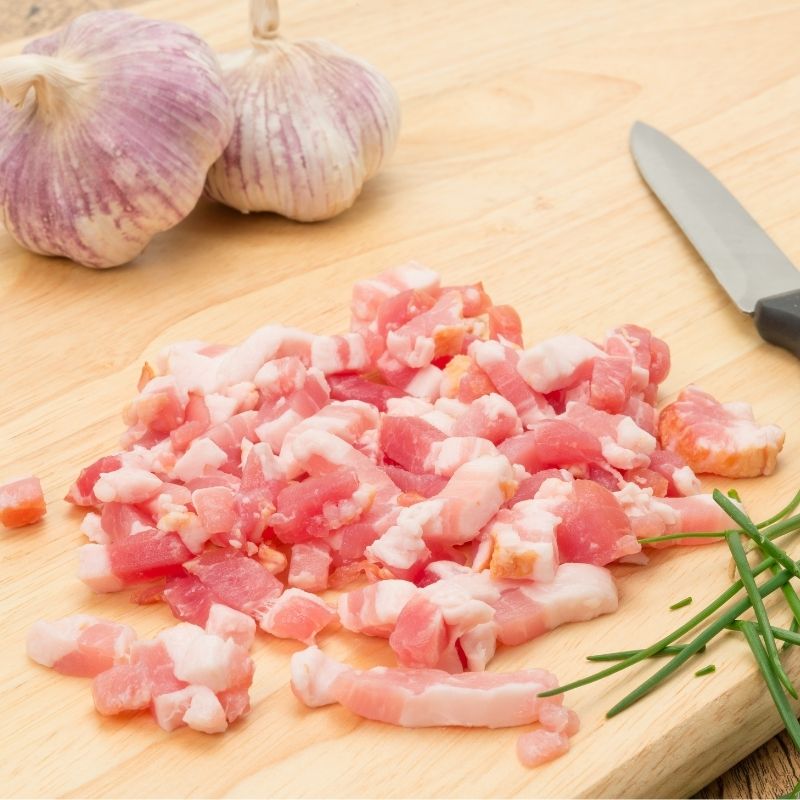 This will be cooked first, then set aside to garnish the dish at the very end. 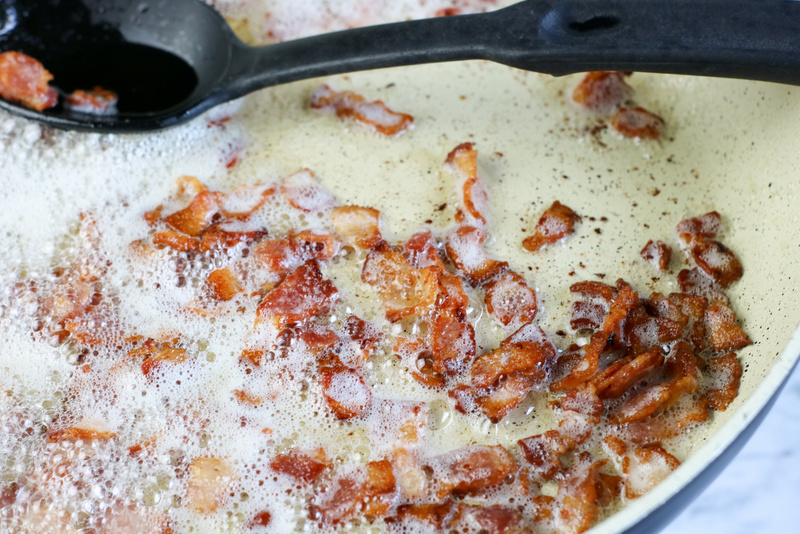 Add the bacon pieces and fry until brown and crisping.

Remove the bacon pieces with a slotted spoon and drain them on paper towels on a plate.

Set the bacon pieces aside for now. 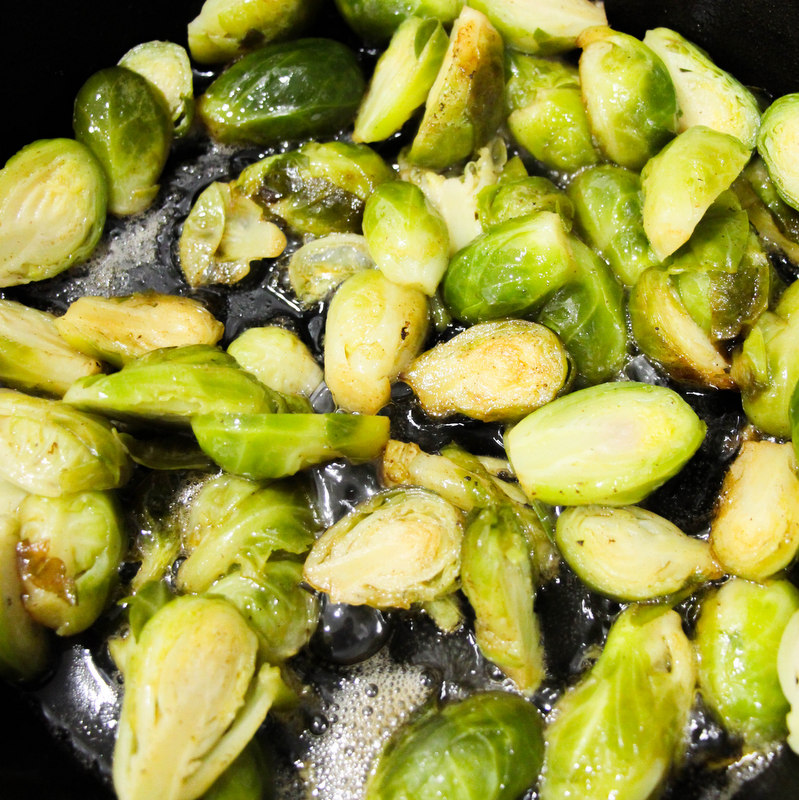 Remove the bacon fat from the skillet. Return a small amount, about 1 tablespoon to the pan. This fat will add lots of extra flavor to the Brussels sprouts.

Add the olive oil to the bacon fat in the pan and allow it to heat for a minute.

Add the Brussels sprouts. I like to place them cut side down in the pan initially. Allow them to cook for about 4 to 5 minutes without moving them about in the pan.

Once they start to brown a little continue to cook them while stirring them about in the pan. Cook for a further 4 minutes. 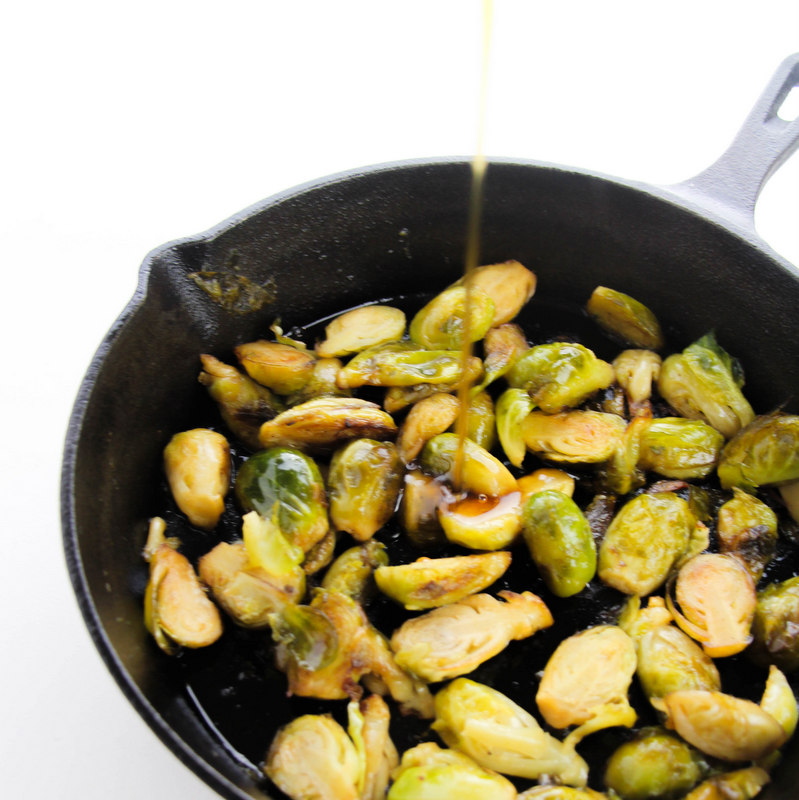 Next, drizzle the maple syrup over the sprouts and continue to stir for another 2 to 3 minutes until the sprouts are completely glazed in sweet syrup and are tender when tested with a fork.

Season with the black pepper. 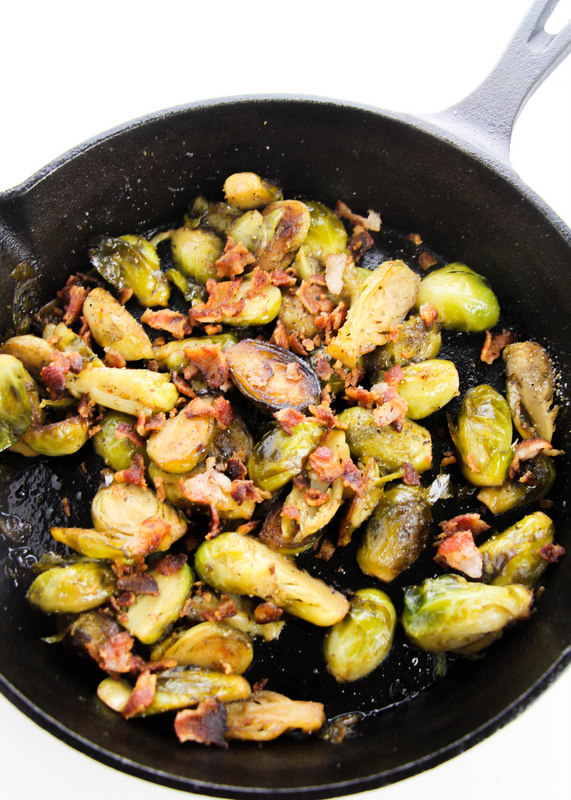 Return the bacon pieces to the pan and mix them through the sprouts.

Allow the flavors to meld a little before serving. 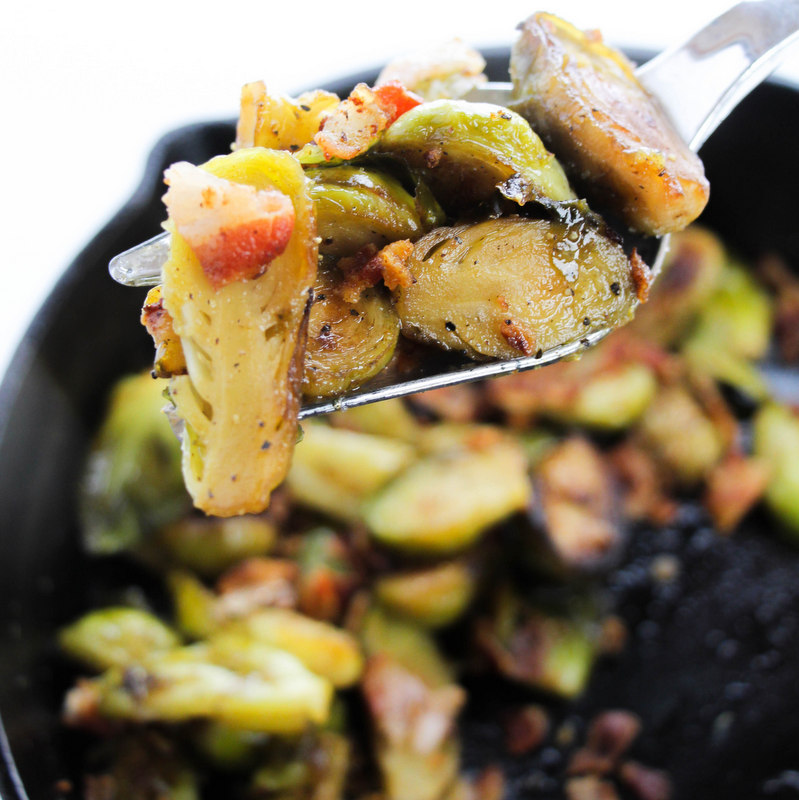 These sprouts are deliciously sweet and savory all at once.

This is my all time favorite way of serving Brussels sprouts.

I think it's my Irish affinity for bacon and cabbage that makes me love this dish so much. Bacon is the perfect partner for any green vegetable, and Brussels sprouts are a thirty-first cousin of cabbage. 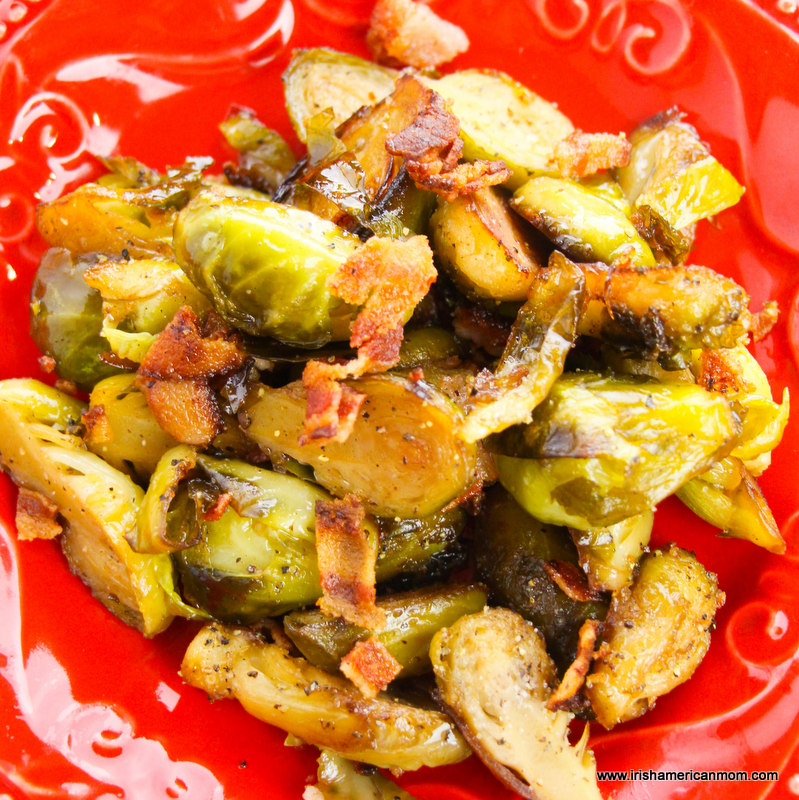 Serve these Brussels sprouts directly after cooking. They taste best when they don't sit around for too long.

They're perfect for Thanksgiving dinners, but my advice is to wash and halve the sprouts in advance, but don't actually cook them until pretty close to serving time.

This recipe is perfect for everyday dinners too. Don't wait until Thanksgiving every year to indulge in a few Brussels sprouts. 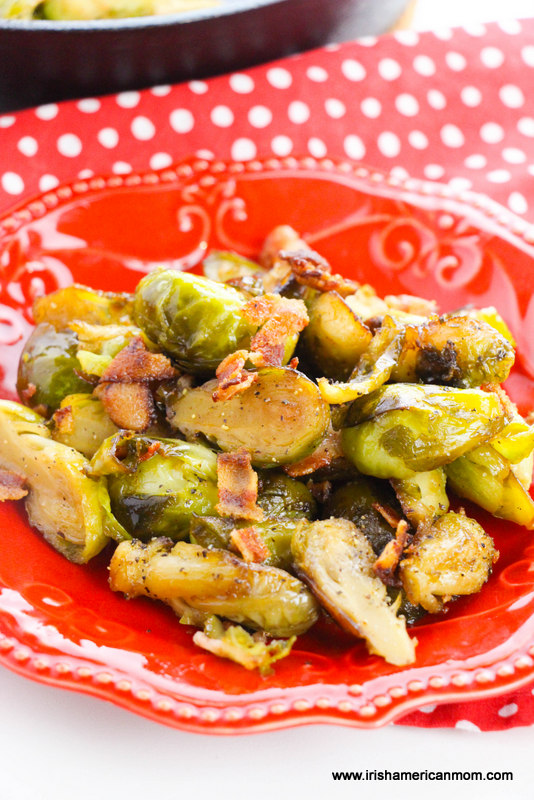 I hope this recipe will convert a few Brussels sprouts detractors, to becoming fans of this humble vegetable.

Here's the printable recipe, if you would like to add it to your kitchen collection. 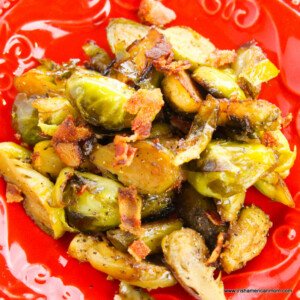 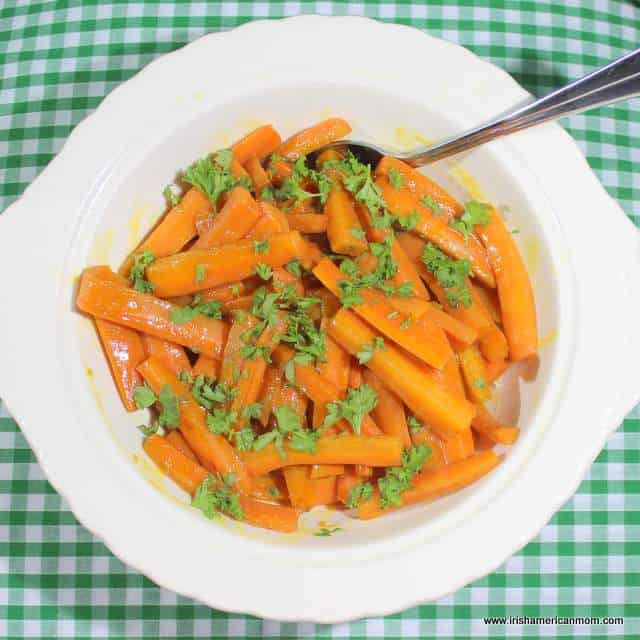 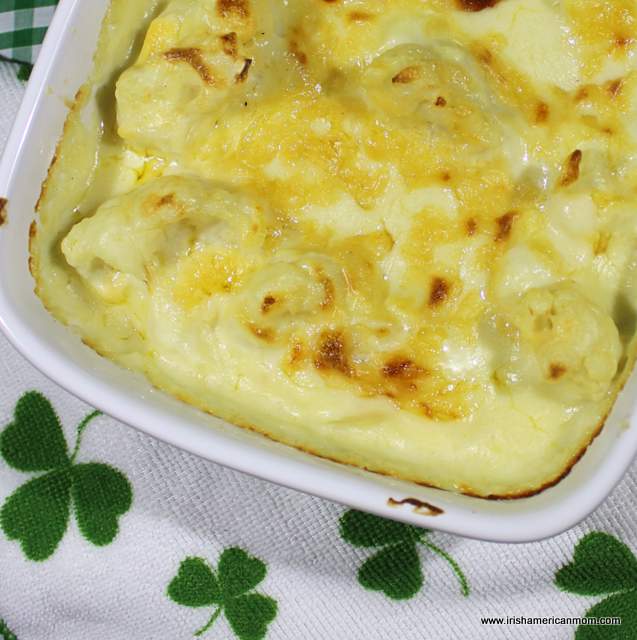 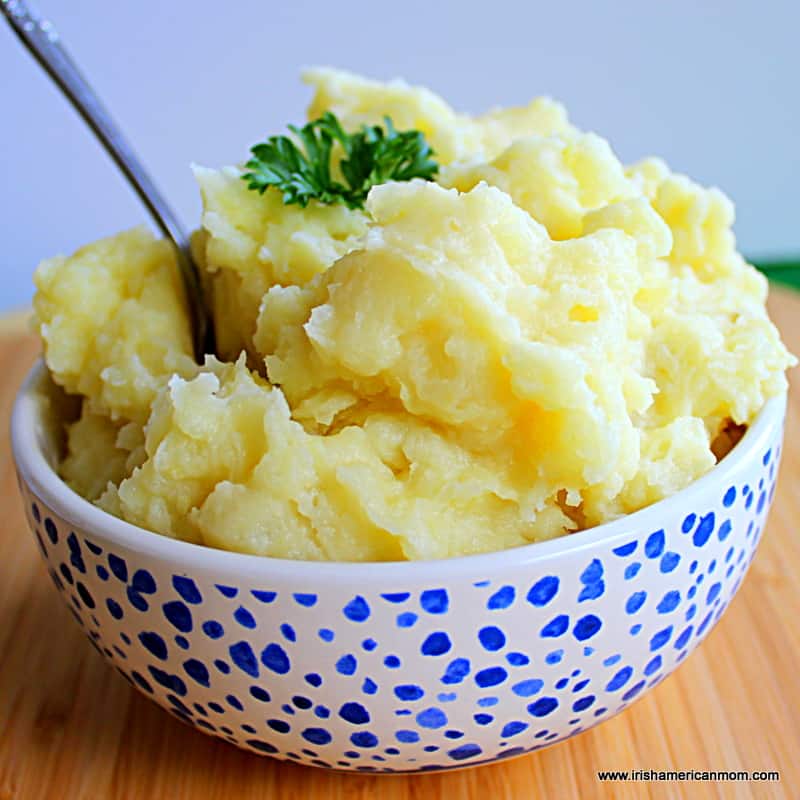