Have you ever browsed through an Irish or English cookbook and over and over again the baking recipes and some dishes call for mixed spice for added flavor?

Have you ever cast aside a recipe and refused to try it, simply because you had no clue what on God’s good earth mixed spice could be?

Well you’ve come to the right place for a quick tutorial on how to make and mix your very own mixed spice. You too can create a little taste of Ireland and the British Isles.

Plus if you don’t have time to make your own mixed spice, we’ll discuss some good substitutions for your recipe.

It’s a British spice blend. Ireland shares many cooking traditions with England, Scotland and Wales. Specific spice ingredients are combined to create this spice mixture with warm, sweet tones. There’s some flexibility in ingredients and quantities used, but there’s a definite balance required for an authentic taste.

You’ll find exact ingredient amounts in the recipe at the end of this post.

Caraway is an optional ingredient which I don’t use in my blend, but feel free to add it.

Allspice Is Not Mixed Spice

Allspice is not a blend. It’s simply one, stand-alone spice ingredient.

I seldom use all caps, but this time I couldn’t help myself. I feel passionate about getting this spicy message across.

Mixed spice is very similar to a Dutch spice mix called Koekkruiden or speculaaskruiden. (Don’t ask me to pronounce those words – they’re double Dutch to me).

German gingerbread spice has similar ingredients too, but has more star anise and cardamom than British mixed spice.

When this concoction was first created is really unknown. However, some of the Asian spices used in this blend were introduced to the British Isles by the East India Company. Founded in 1600 this English trading company’s goal was to share in the East Indian spice trade and break up the Spanish and Portuguese monopoly of this lucrative business.

New and exotic flavors were introduced to the English palate. Over the years cooks experimented with the new additions to their ingredient cupboards. However it wasn’t until the late 18th century that an official mixed spice blend appeared in a cookery book.

The table of contents of a 1795 book called “The Practice of Cookery” by Mrs. Frazer, lists mixed spices.

It also appears in “A Supplement to the Pharmacopœias” by Samuel Frederick Gray, published in 1828.

Uncertainty about when mixed spice blend first appeared in cookbooks has arisen because of the many alternative names associated with it. Some books from the 18th century refer to ‘sweet spice” which technically was probably mixed spice. Other names include pudding spice and cake spice add to the confusion.

The best substitution for mixed spice is the Dutch spice koekkruiden, but it’s probably just as easy to find mixed spice in the United States as it is to find this Dutch blend.

However, for an authentic mixed spice blend, here’s my recipe.

Here’s what you’ll need for making this Irish baking essential. You’ll find exact amounts in the printable recipe at the bottom of this post.

How To Make Homemade Mixed Spice

The directions for making homemade mixed spice couldn’t be simpler.

Wash the jar out well in hot, soapy water first. Then dip it into boiling water to help make sure it is clean. Air dry it completely before filling it with the spice mixture.

Store the spice jar in a dark cool place. A nice dry place at the bac of a kitchen cabinet or cupboard, and away from direct sunlight is best for storing spices.

It should be good to use for up to 9 months.

Here’s the printable recipe if you’d like to add this one to your collection. 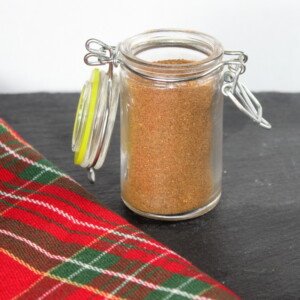 I hope this recipe is helpful if you’d like to create this taste of Ireland and the British Isles to add a little authentic spice to your baking.

Here are some of my baking recipes that call for mixed spice.

Happy baking to all! May all your pies, cakes and tarts be filled with festive flavor this year.

Here’s a pin friendly image for any readers who like to file recipe ideas on their Pinterest boards.