Irish clans are traditional family or kinship groupings that share a common surname and heritage. The Irish last names we bear so proudly are handed down to us from our fathers. So, I thought Father's Day would be the perfect time to explore our Irish clans and crests.

And to really help us celebrate Father's Day, Brendan McCarey of Painted Clans, an artist based in County Monaghan, is offering a wonderful framed, single Irish crest, piece of artwork for one lucky reader to win. 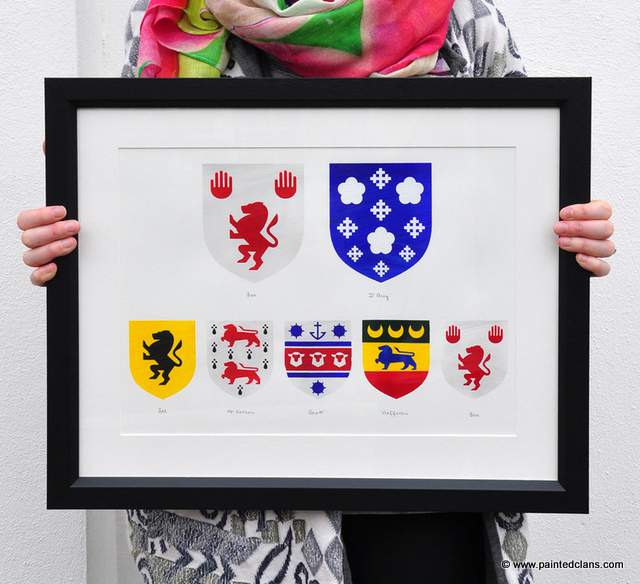 But before I share the details of this fabulous prize and how to enter the giveaway, let's delve into a little bit of Irish clan history.

Larger clann groupings grew to be more powerful than others through war, politics, talking, bartering, one-up-manship, divilment, cunning and whatever on God's good earth it took to get ahead in ancient days.

Leaders of some of these clans were given the status of royalty in Gaelic Ireland, like the O'Briens of Munster, the O'Conor's of Connacht, the O'Neills of Ulster and the Kavanaghs of Leinster. 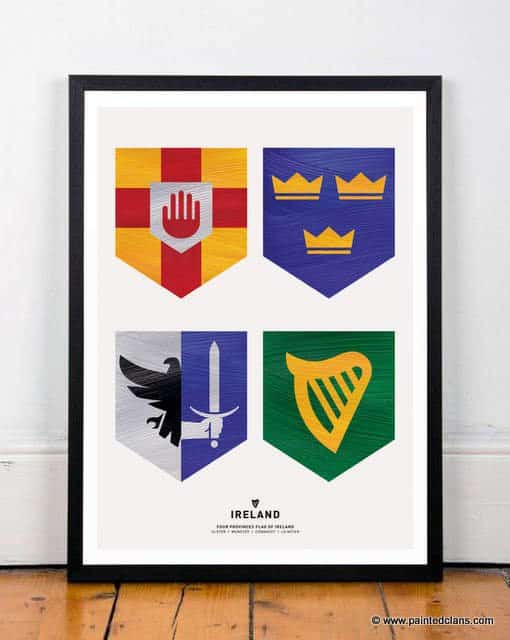 Larger clans were led by a Taoiseach (pronounced Tee-shock) or Chief. The leader of Ireland's parliament, the Dáil (pronounced Dawl) holds this title in modern Ireland. 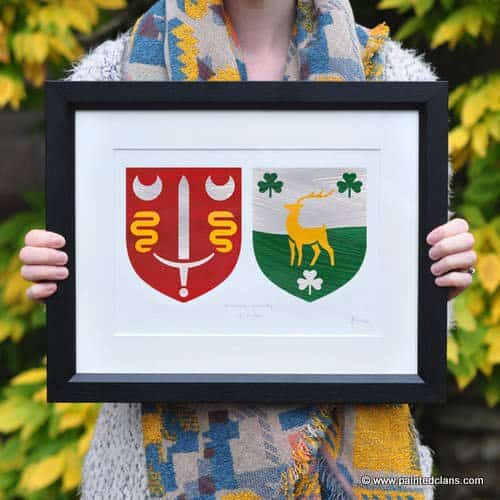 Negotiations were held to iron out the terms of these familial consolidations, strategic alliances and the co-mingling of lands and resources to ensure survival. I'm sure there was many a heated argument forging the way forward with family, friends and foes.

As a result, Irish clans were not only composed of blood relatives, but also consisted of adopted and fostered clan members - those pledging allegiance to one chief, and willing to assume the clan name. 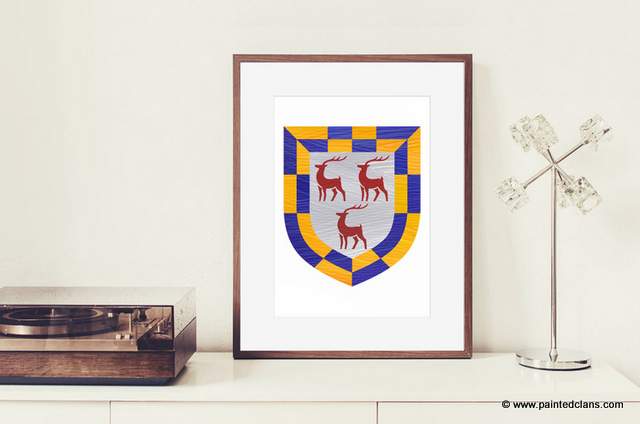 The first decade of the 17th century heralded the beginning of the end for the ancient Irish clans. The English re-conquest of Ireland marked the great destruction of Ireland's ancient Gaelic aristocracy and way of life. 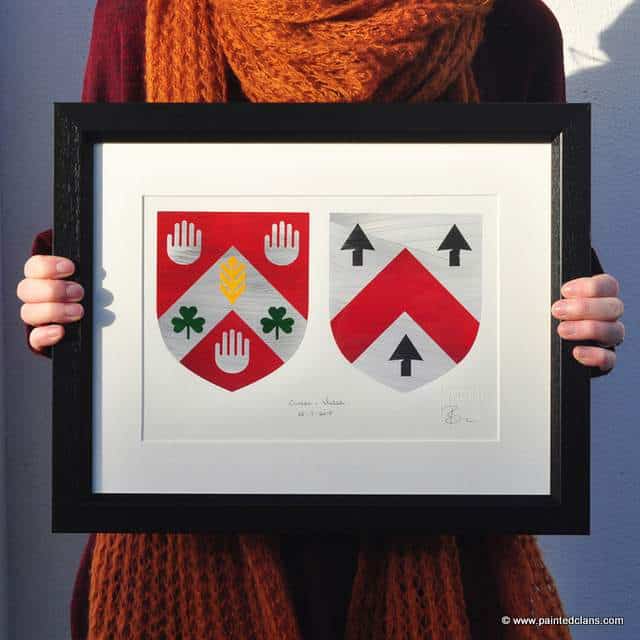 As a result a list of Irish Clans was created in the 1940's. An Irish surname or last name determines eligibility for clan membership. 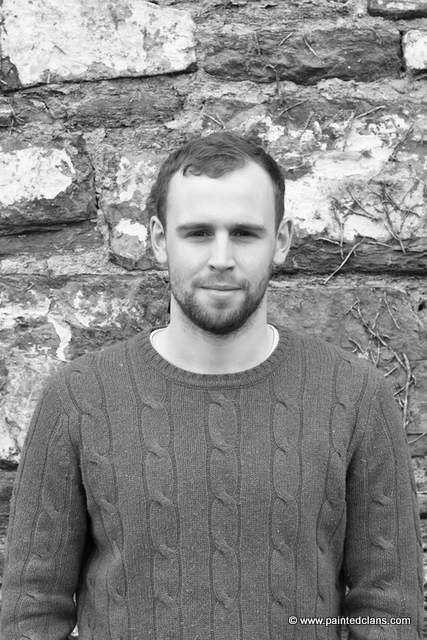 An old coat of arms plaque, which hung in his family's home, was inspiration for his handmade wedding gift.

He diligently researched his friends' family crests and sketched out his ideas. His work stirred his thirst for history, and a keen interest and pride in his own family story and emblem.

Each crest is researched and redesigned with a modern, minimalist style. While maintaining the original elements of each unique crest, these ancient Irish symbols are hand painted using fine acrylic paint, framed, embossed and signed. They're simple, yet stunning. 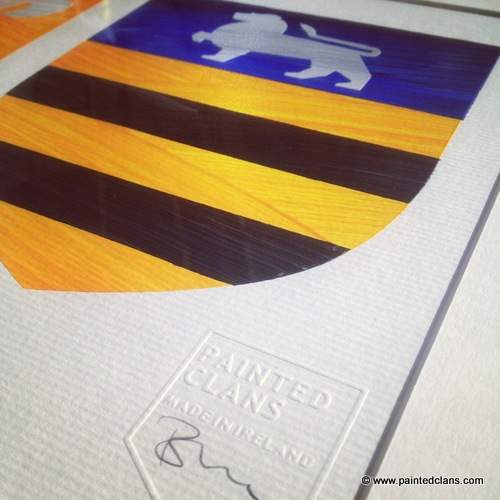 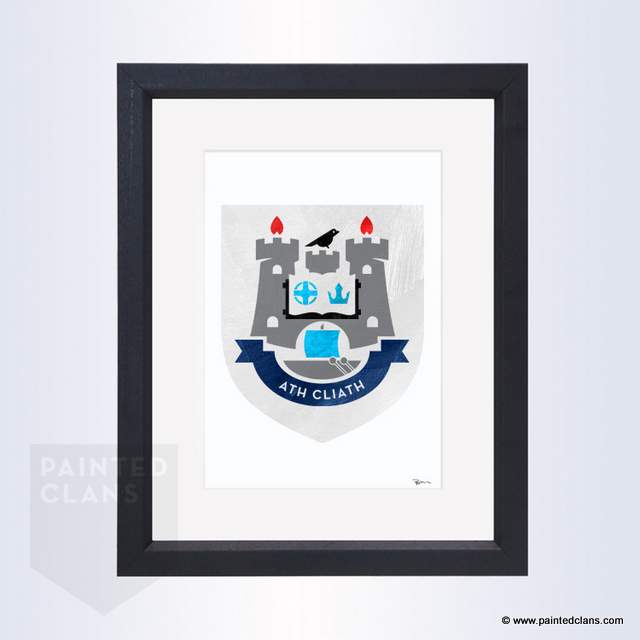 Family crests are a bridge to our past and Brendan's contemporary, modern family heraldry helps reconnect us to our roots.

Older designs may look outdated in the modern home, but the simple style and sleek frames of Brendan's art pieces are the perfect way to introduce new generations to their Irish clan heritage.

One lucky reader will win a single framed crest from Painted Clans, custom made and personalized to your needs.  If you don't bear an Irish name or are unsure of the exact clan you hail from, then perhaps a county crest, or a provincial flag, would look lovely in your home.

The picture comes in a Black Matt frame or a White Limed frame with a 2" Minuet Mount. 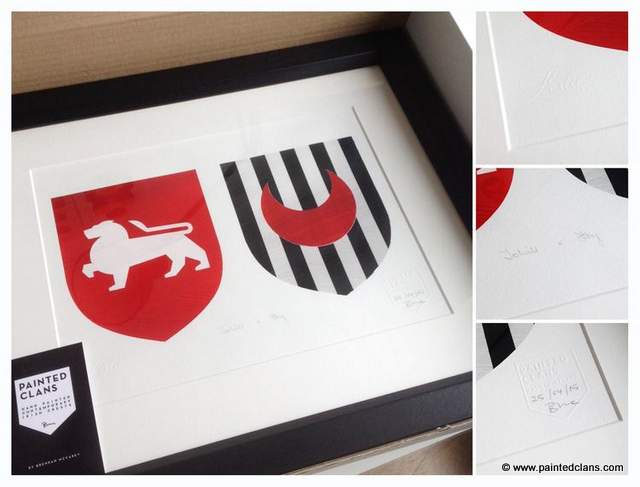 Happy Father's Day To All!

Share my recipes and ramblings with the world
« What Is A Floury Potato?
Furrowed Fields »