Patrick and the President is a heartfelt and beautiful picture book about John F. Kennedy's 1963 return to his ancestral home.

This lovely book was written by Ryan Tubridy, one of Ireland's most beloved media personalities, and illustrated by P.J. Lynch, a prolific Irish artist and picture book illustrator. 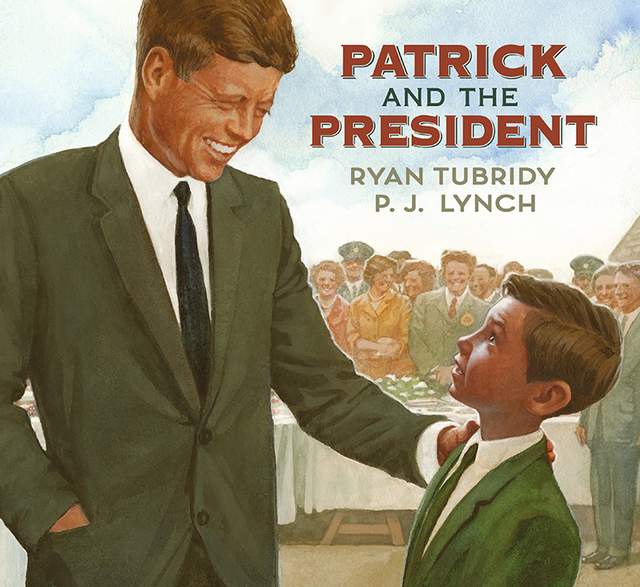 A copy of this delightful children's book has been provided by the publishers Candlewick Press, for one lucky reader to win.

The details on how to enter the giveaway are at the end of this post, but first let me share how this book commemorates this important piece of Irish American history.

Inspiration For Patrick and the President:

Witnessed through the eyes of a young Irish boy, this captivating story beautifully evokes John F. Kennedy’s return to his ancestral home.

When the beloved president visited Ireland in 1963, he described it as the best four days of his life.

And for a generation of Irish people, it was a trip they never forgot. This warmly told, bighearted picture book captures the fevered excitement in the buildup to the president’s visit, seen through the eyes of a young boy named Patrick who wants to know more than anything what it would feel like to shake the president’s hand.

Rooted in historical fact and marking the centennial of John F. Kennedy’s birth, this feast of a book offers readers a pure and personal take on JFK’s visit to County Wexford, Ireland.

Included in the back matter is a time line that helps amplify the story.

A sneak peak inside Patrick and the President.

John F. Kennedy always had close personal ties to Ireland. In the late 1840s, during the devastating potato famine, all eight of his great-grandparents left Ireland and immigrated to Boston, Massachusetts, where several family members became successful politicians.

“This is not the land of my birth,

but it is the land for which

I hold the greatest affection.”

JFK treasured his Irish heritage, and after his presidential inauguration, he was determined to return to his ancestral home and walk in the footsteps of his forebears.

In April 1963, it was announced in Ireland that the American president was coming to visit. His trip was planned with military precision, and at every stop along his four-day trip, tens of thousands of people flocked to catch a glimpse of him.

For a whole generation of Irish people, JFK’s visit to Ireland became a momentous and unforgettable occasion in their lives.

A sneak peak inside Patrick and the President.

Ryan Tubridy is one of Ireland’s leading and best-loved media personalities, gracing both the Irish and U.K. airwaves, and he has won numerous awards and accolades.

He is best recognized as the current host of the long-running chat show The Late Late Show and is also the author of a nonfiction book for adult readers, JFK in Ireland: Four Days that Changed a President. Ryan Tubridy lives in Dublin.

Here's what Ryan has to say about Patrick and the President ...

"Everywhere he went the president was met by schoolchildren, and this is where Patrick, the putative hero of this book, comes in - a funsize eyewitness to an enormous story. Does he get to shake the hand of the most talked-about man in the world, or do they merely pass in the throng?"

His research brings impeccable detail to the twenty books he has illustrated, including The Christmas Miracle of Jonathan Toomey by Susan Wojciechowski, When Jessie Came Across the Sea by Amy Hest, A Christmas Carol by Charles Dickens, and Mysterious Traveler by Mal Peet and Elspeth Graham, as well as his author-illustrator debut, The Boy Who Fell Off the Mayflower, or John Howland’s Good Fortune.

"As an illustrator I have worked

on lots of fairy tales and fantasies,

but I have always been attracted to stories

that are based on some element of truth."

One lucky winner will win a copy of Patrick and the President.

Any comment will do. What you write does not affect your chance of winning, but if you need inspiration why not tell us if you have any memories of JFK.

The winner will be announced on Saturday, March 11th 2017, at the bottom of this blog post.

A big thank you to Candlewick Press for sharing this wonderful children's book with us today. I am delighted to help commemorate the 100th anniversary of John F. Kennedy's birth by sharing this book.

And a big shout out to all who take the time to leave a comment to enter this little giveaway. As always, your support is greatly appreciated.

Thanks to everyone who joined in and entered this little giveaway. And a big thank you to Candlewick Press for sponsoring this prize. Wishing everyone a very happy St. Patrick’s Day.

PATRICK AND THE PRESIDENT. Copyright © 2017 by P. J. Lynch. Reproduced by permission of the publisher, Candlewick Press, Somerville, MA on behalf of Walker Books, London.

Where To Celebrate Saint Patrick's Day In Ireland