“That put the kybosh on things!” Have you ever heard this phrase? I know it is one I often heard when I was growing up in Ireland. My granny loved to use the word “kybosh.”

If you came up with an idea she wasn’t too keen on, she might reply by saying …

“We’ll put the kybosh on that now.”

The word “kybosh” means to put an end to something, to stop or halt its progress, and I know it is a favorite word in County Cork. 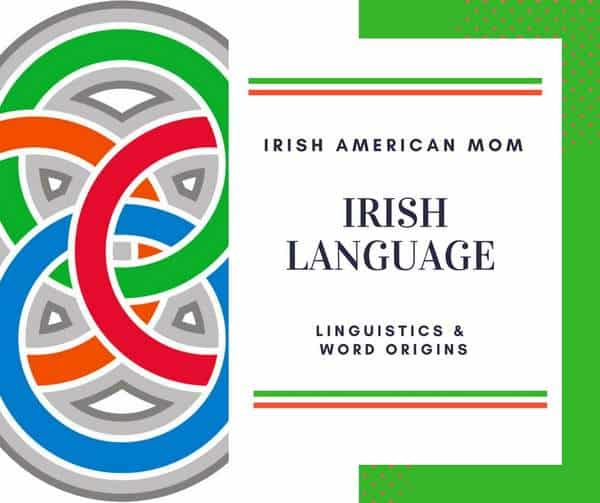 But lo and behold, when I moved to New York many years ago, I discovered the word “kybosh” is also a favorite there.

And so today, I thought we would dive into a little Irish linguistics and try to discover the origins of the word “kybosh.”

I heard the word “kybosh” so frequently as a child the phrase became part of my regular speech. Many years later I used it when talking to a friend in New York.

“Are you Jewish?” she asked me, with a look of bewilderment.

“The word “kybosh” is Yiddish,” she explained.

I was totally surprised, but when I considered the pronunciation of the word kybosh, I agreed it did sound very Germanic in origin. Many of the patients I worked with in New York spoke Yiddish, so my ear was accustomed to the tones and intonations of this Jewish language.

“I wonder why we also use the term frequently in Ireland, especially in Cork,” I questioned.

Neither of us had any idea. 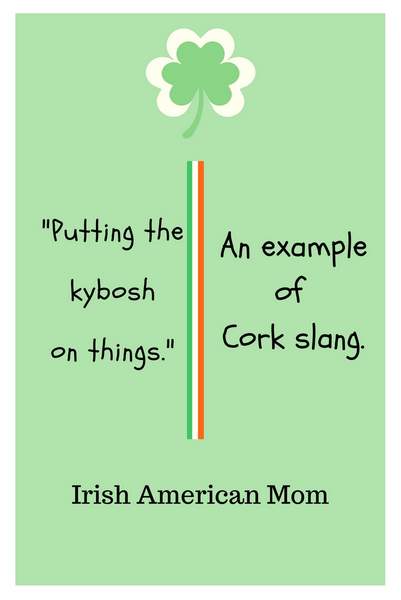 A Dictionary Of Cork Slang:

It was only when I found a little gem of a book that explores the origins of Cork slang, that I remembered my conversation many years ago with my New York friend.

Kybosh actually features in “A Dictionary of Cork Slang” by Seán Beecher.

And here’s what I found out about the derivation of the term kybosh.

The word is a noun and its definition is to put an end to something, to terminate or stymie.

So when we Irish say we are putting the kybosh on something we are quite literally putting the death cap on it.

This explanation was also supported by the Irish poet Padraic Colum who theorized it comes from the Irish words meaning cap of death, the mask worn by an executioner at the block or the black cap donned by an English judge when delivering the death sentence. 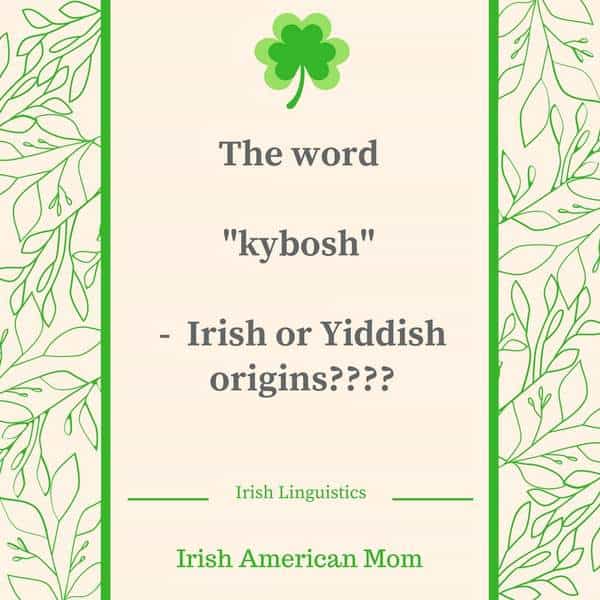 Kybosh – Used In The English-speaking World for 150 Years:

Believe it or not, the word kybosh, or kibosh, has been used throughout the English-speaking world for more than 150 years.

Charles Dickens used the word in “Sketches by Boz” with the first printed examples of “putting the ky-bosk on it” being found here.

It has been suggested that kibosh originates from the Yiddish word kabas or kabbasten, meaning to suppress or stop.

The word was also popularized in the First World War song called “Belgium Put the Kybosh on the Kaiser.” He put the kibosh on him means he defeated him.

On the World Wide Words website there is a detailed explanation of all the historical uses of the word Kybosh.  Check it out if, like me, you are interested in linguistics.

And so, there you have it –  a few linguistic theories all about the word “kybosh.”

We’ll probably never know where it truly originated from, but for me, being Irish, I’m going to accept the Irish origins of the word. Have you or your family ever used this term.

And that, being said, I’m going to put the kybosh on this blog post.