The Many Names for Rutabaga

What you call a rutabaga depends on your location on the globe. There are many names to choose from including turnips, swede, or neeps.

“Rutabaga” is the common American and Canadian term for this yellow root we plan to turn into soup. The name comes from the Swedish word Rotabagge, which apparently means “root bag”. This vegetable has also been called “yellow turnip” on the western shores of the Atlantic.

Originally Jack-O-Lanterns were created in Ireland and Scotland by chiseling out a turnip or rutabaga, and placing hot embers or coals inside. The light represented the souls of the dead, and was used to ward off “Stingy Jack,” a notorious fellow who made a deal with the devil.

When the Irish came across the waters to the United States they started to make Jack O’Lanterns at Halloween, replacing the Irish turnip with the more plentiful American pumpkin. Artistically inclined carvers started to create faces on larger pumpkins, which were far easier to pulp than the old rock-hard turnips of their homeland.

Ingredients for Rutabaga and Carrot Soup

Directions for Carrot and Rutabaga Soup 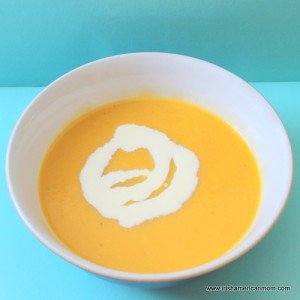