You are here: Home / Cooking / A Taste of Ireland / The Chipper – An Irish Fish & Chip Shop

One of my most vivid memories of Ireland is the aroma of fresh cod and chips wafting from a grease-stained brown-paper bag. 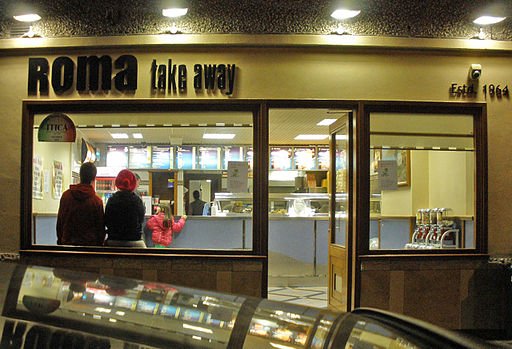 In England and Scotland, the home of many chip shops, the term “Chippie” is used. London claims the very first fish and chip shop which opened in 1860.

Ireland’s first “chipper” wasn’t Irish at all, but an Italian with an entrepreneurial spirit. Giuseppe Cervi, was bound for America in the late 1880’s, but upon landing in Cobh, Co. Cork he disembarked and decided to walk to Dublin, a journey of about 160 miles.

Once there he worked as a laborer, but at night he started selling fish and chips from a hand cart to patrons leaving Dublin’s many pubs. He opened his first fish and chip shop near Trinity College on Great Brunswick Street (today’s Pearse Street).

His wife Palma would ask customers if they wanted “una di questa, uno di quella?” which means “one of this, one of the other?.” To this day fish and a single of chips is called a “one and one” in Dublin.

Cervi’s story is recounted on the Wikipedia “fish and chips” page. 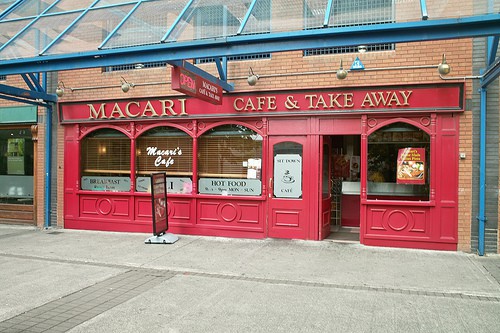 Other Italian families soon followed Cervi, and by 1909 there were 20 Italian chippers in Dublin. When I was growing up our local chipper was run by the Macari family. They cooked delicious deep fried cod or haddock and chips. Other menu items include battered sausages or fried chicken strips, but fish was, and still is, by far the most popular.

Another famous Dublin chip shop is Beshoff’s established by the Russian Ivan Beshoff, who arrived in Dublin in 1913. He lived to 104, his longevity possibly due to a diet rich in fish. With many Dublin locations today, the name Behoff has become synonymous with excellent fish and chips.

However, the prize for best fish and chips in Dublin, and maybe even Ireland or the world goes to Leo Burdock. Opened in 1913 near Christ Church cathedral it is a Dublin institution. 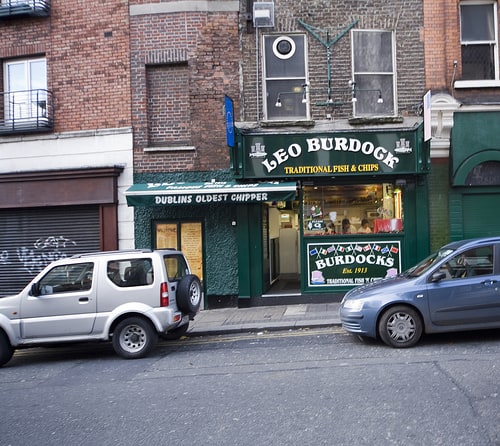 When I studied at Trinity College in the 1980’s our school was located in St. James’s Hopsital which is pretty close to Leo Burdock’s. Many a late night study session was interrupted for a quick trip to Leo Burdock’s for fish and chips wrapped in real newspaper. The  practice of wrapping fish and chips in newspaper is long gone, but I suppose I belong to a bygone era.

Succulent, delicious, flaky fish and thick chips provided sustenance for our nights of last minute cramming. Fish is supposedly brain food and we tested that notion on a regular basis.

Growing up our next door neighbors were true Dubliners. My best friend hailed from many generations of Dublin folk, unlike me whose parents were transplanted country folk from County Cork. Now my Mom, being a country woman would never dream of “wasting money” on the chipper. She sometimes made us chips at home as a special treat a few times a year. In contrast, fish and chips from the chipper was a weekly, Friday treat for our Dublin neighbors.

I remember deviously asking my mother if I could go play next door late on many Friday afternoons. The thought of real fish and chips from the chipper made our neighbors house ever so attractive. Patricia, our neighbor, was the nicest woman in the world. When my Mom called across the fence for me to come home just before dinner time, she often convinced my Mom to let me stay for a special treat. It did not take long for Mom to figure out my antics. She soon banned me from late play dates on Fridays claiming I would “cost that poor woman a fortune in fish and chips.”

Today “chippers” are found all over Ireland, many towns boasting more than one chip shop. Irish people are really fond of chips or french fries.

In the past three decades Chinese take-aways have also popped up all around Ireland. Believe it or not, most Irish Chinese restaurants offer a choice of rice or chips. This menu option is needed to attract and retain potato-loving customers. Cashew chicken and chips falls into the “only in Ireland” category.

Later this week I’ll share my recipe for beer battered fish and perfect Irish chips, together with mushy peas, my husband’s favorite side dish.

And so, here is my advice for tourists to Ireland. If you wish to sample a little taste of Ireland during your trip, why not try a portion of fish and chips from the local “chipper.”