The Giant's Causeway is an amazing geological wonder, which truly has to be seen to be believed. Located amidst the magical splendor of the rugged County Antrim coastline in Northern Ireland, this jagged promontory of neatly stacked and packed rock columns, is completely alluring. 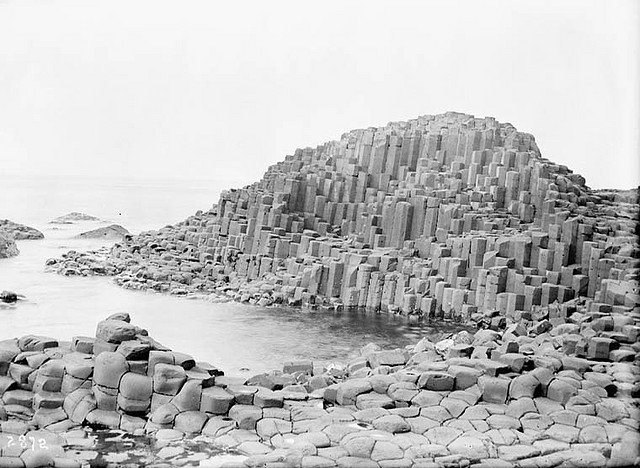 Many Irish people like to consider the Giant's Causeway the 8th Wonder of the World. It consists of a mosaic of stepping stones formed by interlocking basalt, rock pillars, mostly hexagonal in shape. 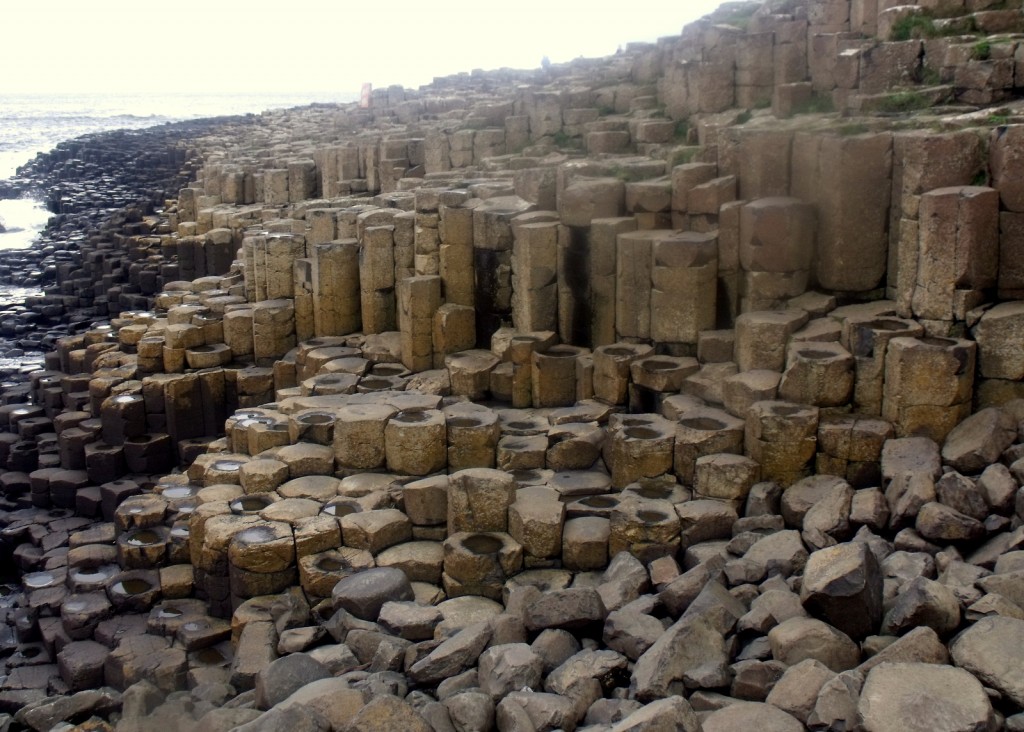 The uniformity of these pillars makes them appear man made, rather than nature made.

Geologists attribute the formation of the causeway to an intense volcanic eruption, which spewed molten, basalt lava into the ocean over 6 million years ago. 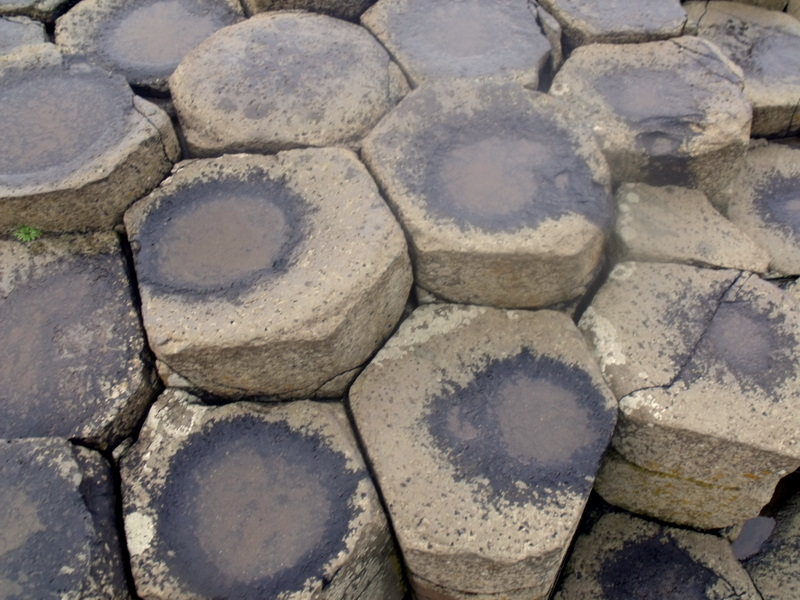 As the liquid lava cooled, it hardened and cracked into distinctive, tile-shaped, interlocking columns, estimated to be around 40,000 in number.

The tallest basalt pillar is around 40 feet high. Behind this high point, the mass of stepping stones gradually narrows, slowly disappearing into the sea. 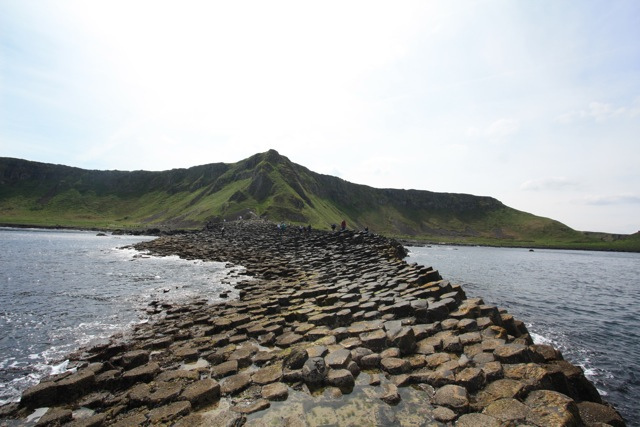 Their close to perfect symmetrical appearance led our ancient ancestors to believe they originated in a magical otherworld.

Celtic Irish mythology attributes the causeway's formation to Fionn MacCumhaill (Finn McCool), the great, ancient giant and hero of Ireland. There are many versions of this tale. My favorite tells how Fionn created his path through the sea to walk to Scotland. He planned to challenge his enemy, the giant Bennandonner (sometimes referred to as Fingal).

On his way over Fionn fell asleep on the causeway. His wife Una spotted Bennandonner walking towards Ireland. She feared for her husband when she saw the enormous size of the Scottish giant. Thinking quickly, as Irish women have a tendency to do, she threw a blanket over her sleeping husband. As the Scottish giant passed her, she pleaded with him not to wake her sleeping baby.

Poor Bennandonner was astonished at the size of the woman's sleeping child. Naturally he assumed if the child could be so huge, his father must be colossal altogether. Petrified of an encounter with such a gigantic Irishman, he hightailed it back to Scotland, ripping up the causeway, thereby preventing Fionn's pursuit. All that remains are the two tail-ends of the causeway, on the northern coast of Ireland and on the Isle of Staffa in Scotland. 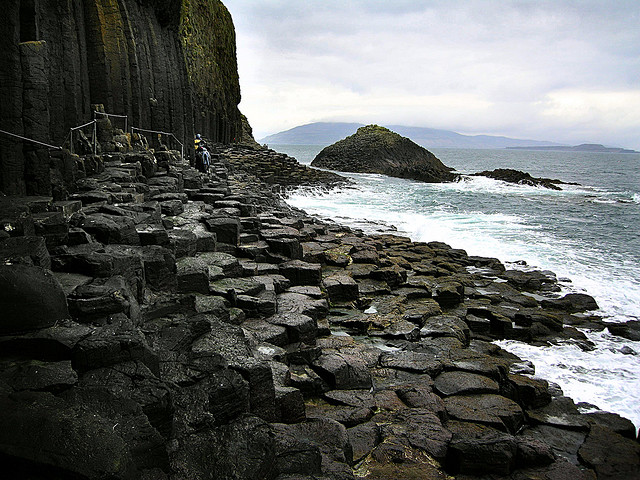 The Scottish Giant's Causeway on the Isle of Staffa - photo credit

UNESCO named The Giant's Causeway a World Heritage Site in 1986. The Department of the Environment for Northern Ireland declared it a National Nature Reserve in 1987 and in 2005 it was recognized as the fourth greatest natural wonder in the United Kingdom in a Radio Times readers' poll.

Information on how to get there and all tourist amenities is available on the Northern Ireland Tourist Board site. A new visitor's center is planned for 2012. 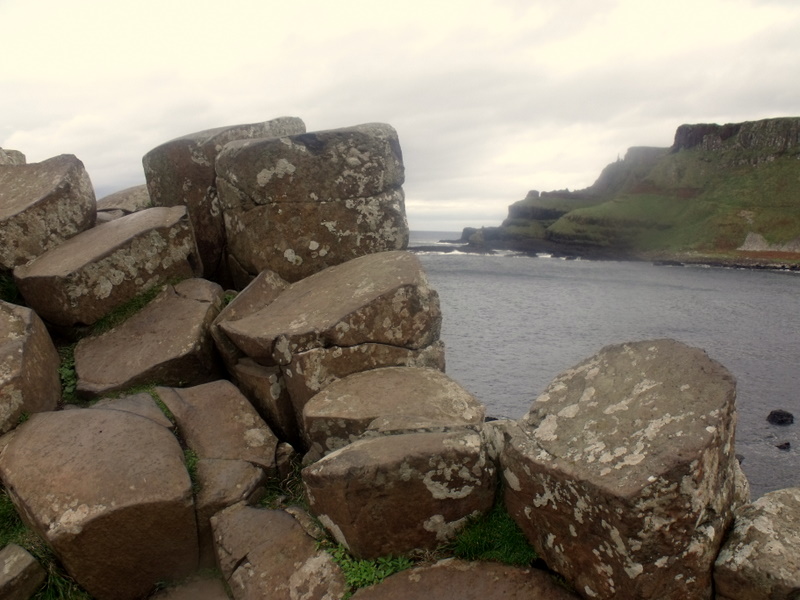 I highly recommend tourists to Ireland do not miss out on the amazing adventure that awaits at the Giant's Causeway. Remember to wear good climbing shoes, pack some rain gear, and get out there on those rocks to experience the wonders of nature, just as Fionn MacCumhaill once did.

Check out my video of the Giant's Causeway.