Old black bicycles remind me of Ireland. These vintage cycles are part of our past, and are lovingly referred to as High Nellies. 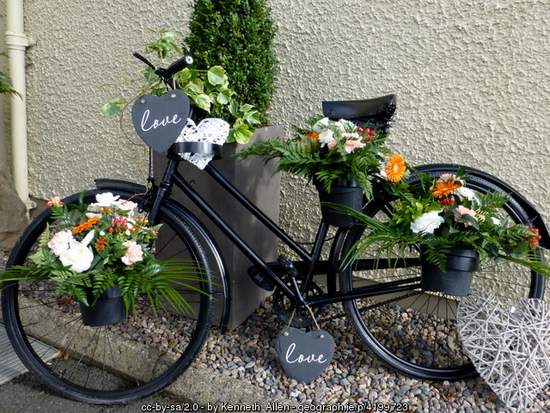 Long before the car appeared in Ireland and for many years after its arrival, when only a few wealthy people could afford such automated luxury, the bicycle was Ireland's chosen mode of transport.

The High Nelly As A Symbol Of Ireland:

I believe the High Nelly, the vintage black bicycle of my homeland, deserves the status of "symbol of Ireland".

I'm going to add them to my list of iconic Irish emblems, right up there alongside the thatched cottage. 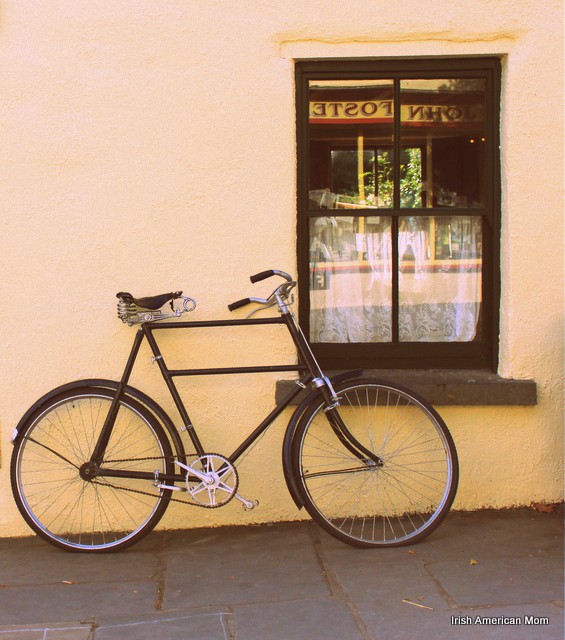 This prestigious title of "symbol of Ireland" is well deserved. So today, let's explore the role these wonderful old bikes played in Irish communities in days gone by.

I hope you enjoy these wonderful photos of old Irish bicycles which have been shared by their creators using a creative commons license. A big thank you to all these generous artists, who allow bloggers like me utilize their works to illustrate our words. 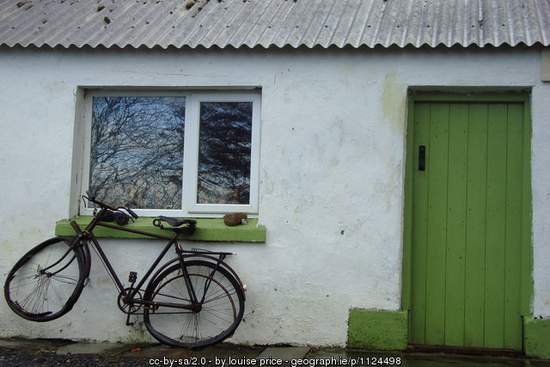 A Transportation Mode For All:

The Irish Wheelman, a late 19th century publication was edited by J.C. Percy. In November 1897 he declared:

"Cycling has now found its level, which happily is a very high one.

It is no longer a fad or a fancy, but an established factor in modern everyday life…

The army of riders is increasing with constant and steady growth,

and will continue to enrol in its numbers members of every age, sex, and rank."

And so it appears that by the turn of the 20th century bicycles had truly caught on in Ireland. Young and old, male and female, rich and poor were pedaling around the country. 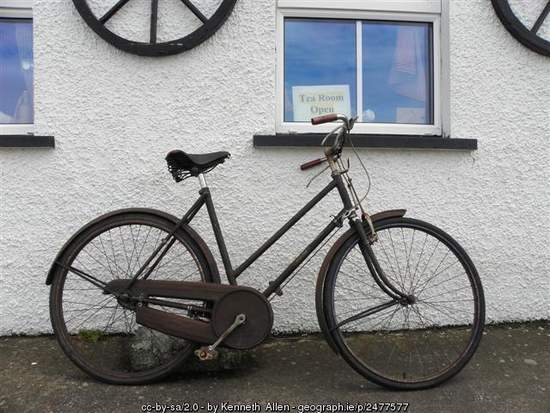 In decades past the High Nelly or tradesman's bicycle was one of the top selling items in rural hardware shops throughout Ireland.

To tell you the truth, that came as no surprise to me. These bicycles were a lifeline in rural Ireland. Ladders balanced alongside the crossbar, as busy workers pedaled around the countryside to get to the job site.

Whatever the task, be it cleaning windows, sweeping chimneys, digging ditches, the tools of the trade were attached to handlebars, carriers and crossbars, often in the most ingenious manner. 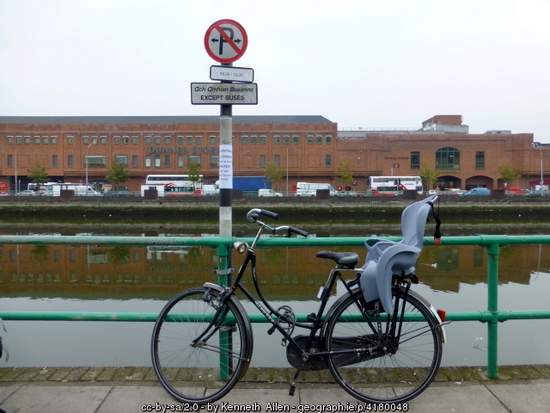 A Woman's Bicycle Too:

Now, the High Nelly was not just a bicycle for tradesmen. It liberated our grandmothers and mothers allowing them to move around the countryside alone.

They rode their bicycles into town for the messages. Shopping bags were balanced on handlebars and carriers, with women becoming expert cyclists. 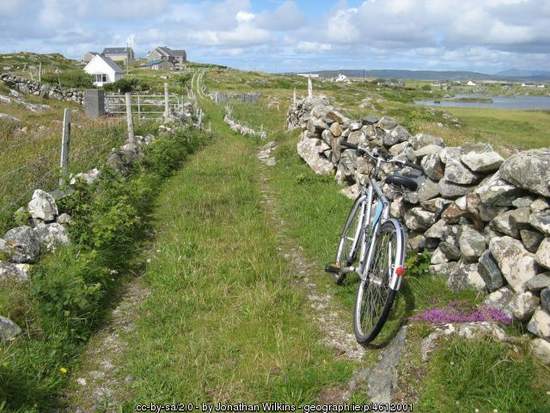 They rode their bikes to the dance halls, and leaned their bikes against stone walls when they stopped for a quick court.

At the turn of the 20th century, not everyone was keen on the independence and freedom that cycling gave women, with some even calling for bicycles to be banned for females. 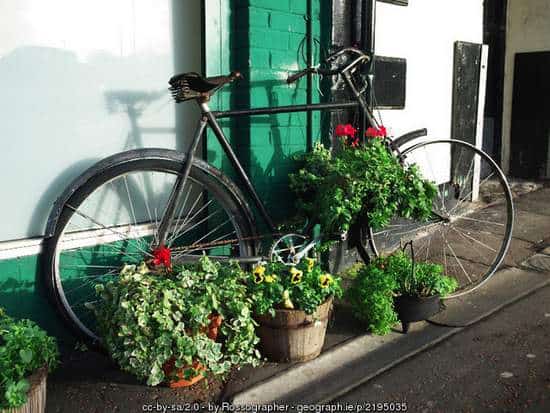 The High Nelly As Movie Prop:

These vintage bicycles have featured frequently in movies set in Ireland.

Of course, we all remember Maureen O'Hara as Mary Kate Danaher, cycling her bicycle around her village in The Quiet Man.

The Ballroom of Romance (1982) was based upon the William Trevor short story and starred Brenda Fricker as Bridie, an unmarried Irish woman in search of a good husband. She rode her High Nelly to the local dance hall, where all she found was the alcoholic Bowser Egan.

These wonderful bikes also featured in a more recent movie about an Irish dance hall. In Jimmy's Hall (2014) 35 High Nelly bikes were used as props. 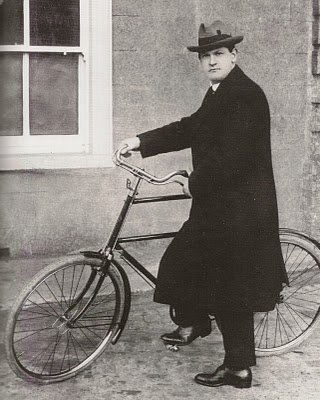 Michael Collins And The High Nelly:

The High Nelly was also famously ridden around Dublin by Ireland's hero of independence Michael Collins. He cycled around the capital anonymously, succeeding in evading his enemies, despite the fact there was a £10,000 price on his head.

The actual bike used by Michael Collins was located by Marty Mannering, who restored it lovingly. Mannering has started a company in Cappamore, County Limerick called High Nelly. He's a busy man building newly made High Nellies for shipping around the world. 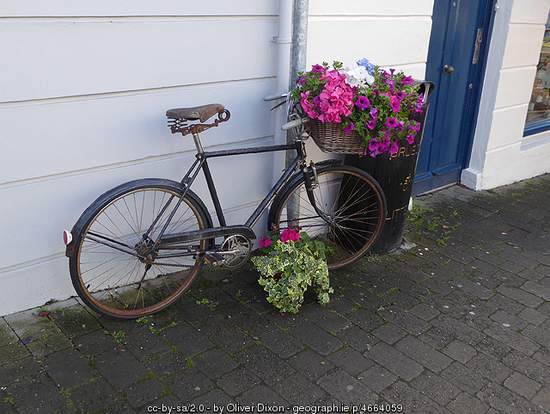 Mannering's company even specializes in restoring old bicycles. If you find an old family heriloom in your garden shed, Mannering is the man to help you get it back on the road.

He's even working on refurbishing an old bicycle that was used by a runner for Padraig Pearse in the Easter Rising of 1916. 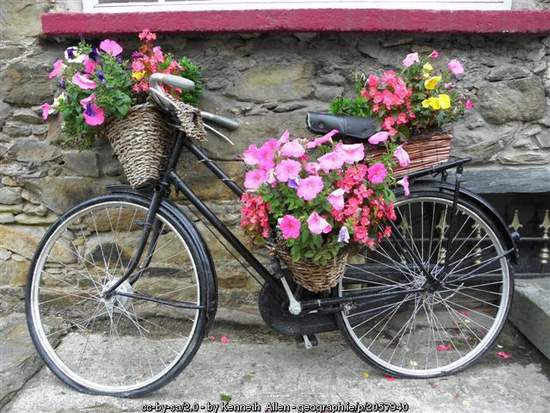 After a period of 40 years with no bicycles being made in Ireland, it's lovely to know that thanks to Mannering,these beautiful old Irish bicycles are once again being manufactured in Ireland.

Wishing him every success with his endeavors. 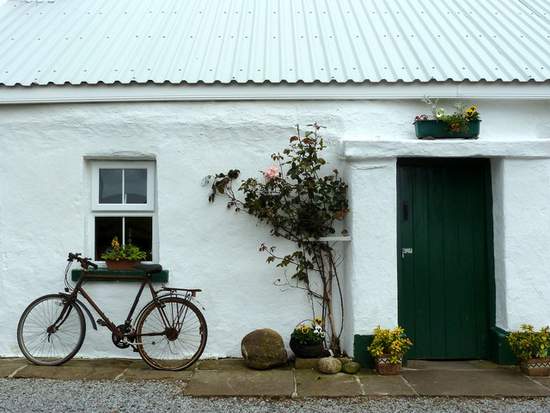 There's something romantic about a crisply whitewashed wall with a vintage bicycle resting against a window sill. I love to spot old Irish bicycles positioned artistically beside old cottages. 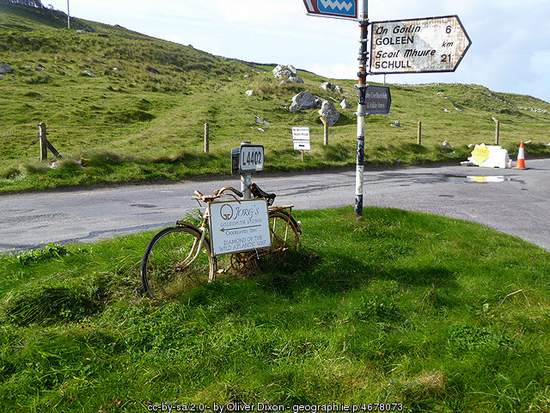 Their use as signage for restaurants and businesses simply underlines how much we all appreciate these old modes of transportation. 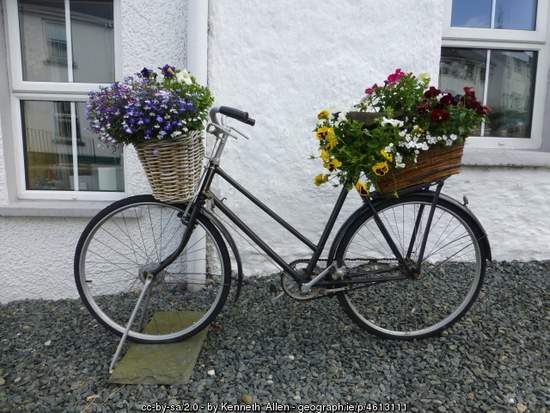 And let's face it, these black bicycles make perfect planters. Every time I see one, adorned in magnificent blooms a nostalgic sigh escapes my lips. 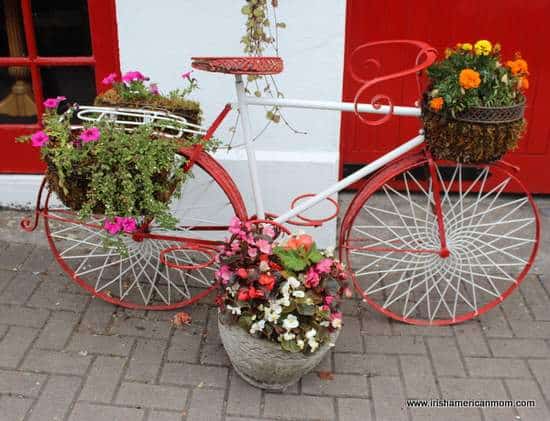 I spotted this wrought iron replica in the village of Adare, County Limerick a few years ago. 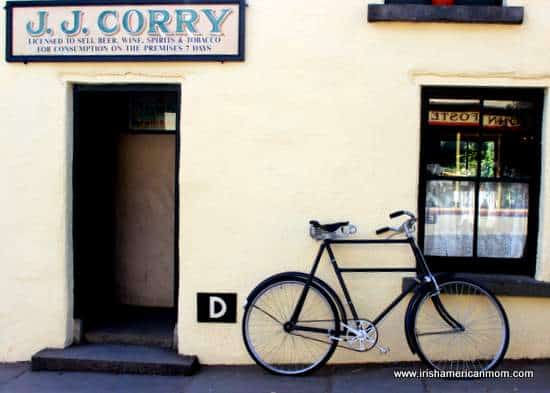 And so, there you have it - my round up of Irish bicycle tales.

After reading my ramblings I hope you too will "get on yer bike" and join me in assigning these national treasures the iconic title of "symbol of Ireland. 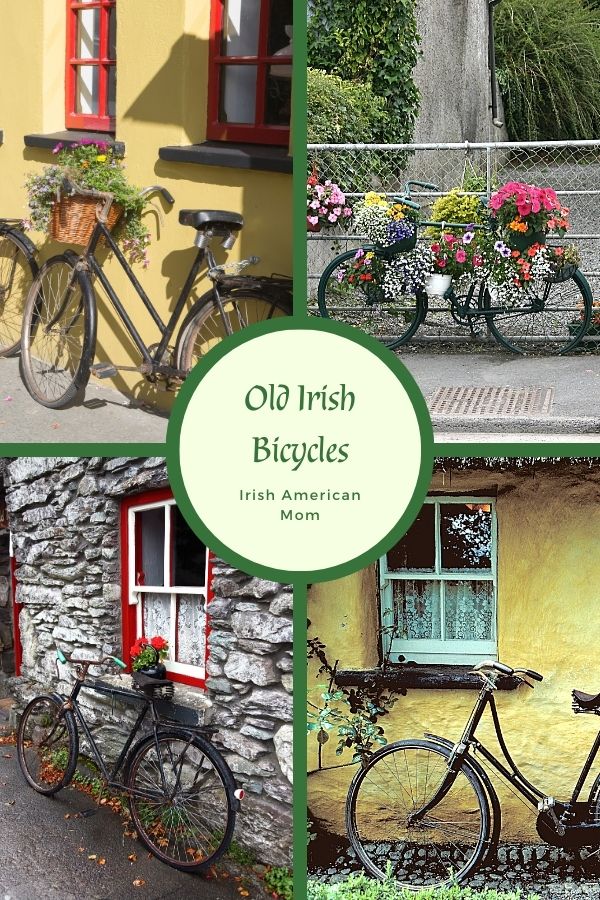 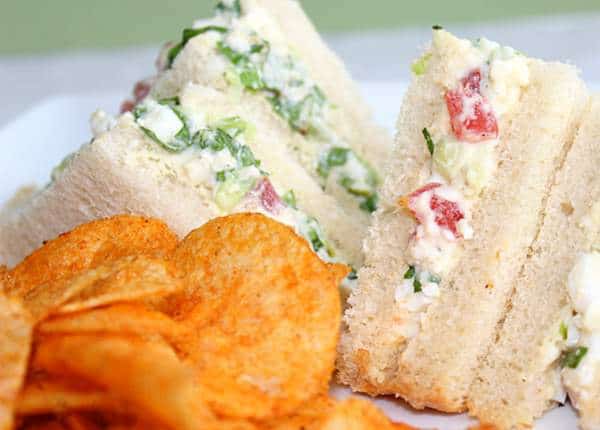