Have you ever wondered what's the story behind the Blarney Stone?

What's all the fuss about landing a big smacker on a cold, inert lump of stone?

And how on God's good earth can a stone bestow the gift of eloquence? 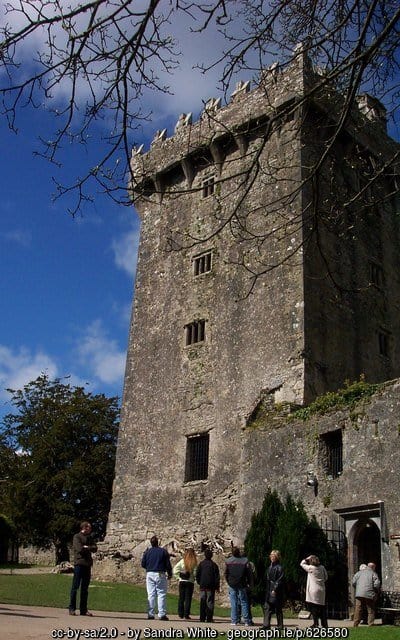 Well, fear not! Today's post will hopefully answer some, or maybe even all, of these questions about Ireland's famous Blarney Stone located in County Cork, and provide some insight into all this kissing hoopla.

And I promise, I'll try not to overload you with a load of old blarney as we navigate the myths and legends behind this famous Irish landmark.

Located Atop A Castle:

For many visitors, it comes as quite a surprise to learn the Blarney Stone is not rooted solidly in ground level Irish sod, but is actually situated on top of an old Irish castle. 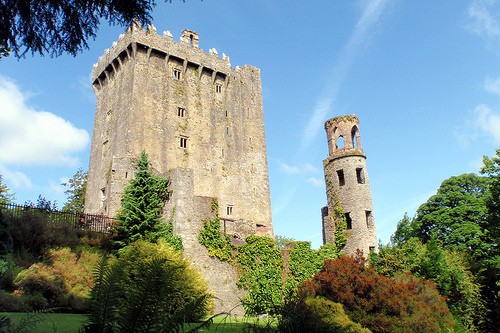 That's right - the stone is wedged right into the walls of an old medieval fortress, Blarney Castle, originally built, way back over 500 years ago, by the powerful MacCarthy clan from Cork.

Today, the interior of the castle lies in ruin. But the walls stand firm, to allow visitors climb to the battlements in search of the stone. I like the fact the castle has not been renovated. It adds to the ancient mysticism of the site. 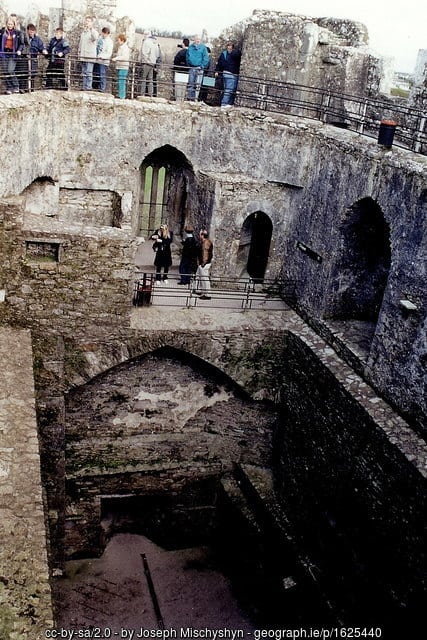 Kissing the stone first became popular in the 1800's. For over two centuries visitors have sought out this stone in search of storytelling prowess, or as the Irish like to say, the gift of the gab.

Anyone who puckers up and lands a smooch on this famous piece of bluestone rock will be bestowed with the gift of eloquence.

Kissed by rich and poor, young and old, famous and not-so-famous, the millions of kissing pilgrims over the past two hundred years, have one thing in common - they came in search of blarney.

But What Is Blarney?

Blarney is a word to describe the gift of the gab, but the Stone of Eloquence does not bestow mere baloney or waffling speech.

There is something far deeper to real blarney - a wit and wisdom, a glib genius and turn-of-phrase many Irish are renowned to possess.

An Irish politician John O'Connor Power summed it up beautifully ...

"Blarney is something more than mere flattery.

It is flattery sweetened by humor and flavored by wit.

Those who mix with Irish folk have many

examples of it in their everyday experience"

Winston Churchill, world renowned for his oration skills, kissed the stone back in 1912. Here's a snippet from the Washington Post describing the power of blarney bestowed upon Mr. Chruchill ....

according to all the traditions,

for the learned lexicographers state

that he who kisses the Blarney Stone

is endowed with the power ‘to blarney,’

and ‘to blarney,’ they say, is to humbug

with wheedling talk so as to gain a desired end....” 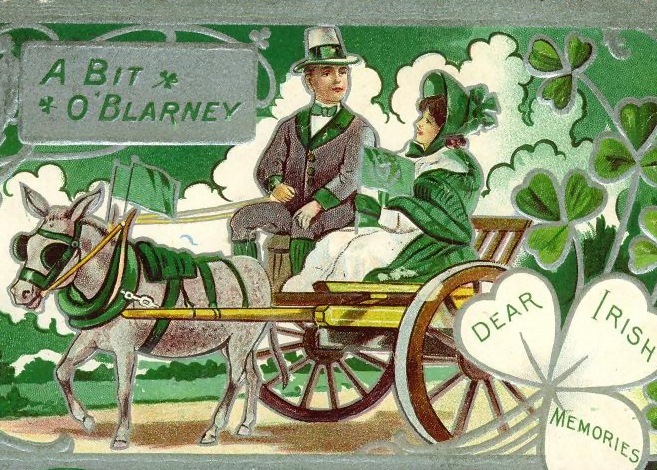 Another story tells how Queen Elizabeth I ordered the Earl of Leicester to seize Blarney Castle from its Irish owner Cormac Teigue MacCarthy. But Cormac, through his gift of the gab, was up to the task of thwarting the Earl.

Whenever they met for negotiations MacCarthy distracted the Earl with banquets, entertainment and chat. The castle was never taken, and apparently the queen herself remarked the Earl's reports on his progress were nothing but "blarney".

And so, few dispute the stone's powers, and what a gift it is to be able to speak a little blarney, but how and why this piece of bluestone came to be ensconced atop the battlements of a medieval keep in county Cork is another story altogether.

Myths and legends abound explaining how this came to be, but the true answer may always elude and continue to give rise to debate.

Legends Of Prophets, Saints And Kings:

One legend claims the Blarney Stone was actually Jacob’s Pillow. The prophet Jeremiah is said to have brought it to Ireland, where it became the "Lia Fáil" (pronounced Leah Fawl), meaning Stone of Destiny.  This was the stone on the inauguration mound on the Hill of Tara, where the High Kings of Ireland were crowned. An ancient stone still stands on the Hill of Tara, but some believe the Blarney Stone to be the true Lia Fáil.

Another myth claims the stone was St. Columba's deathbed pillow. He died on the island of Iona and after his death the stone was moved to mainland Scotland. There it became the Scottish Stone of Destiny. 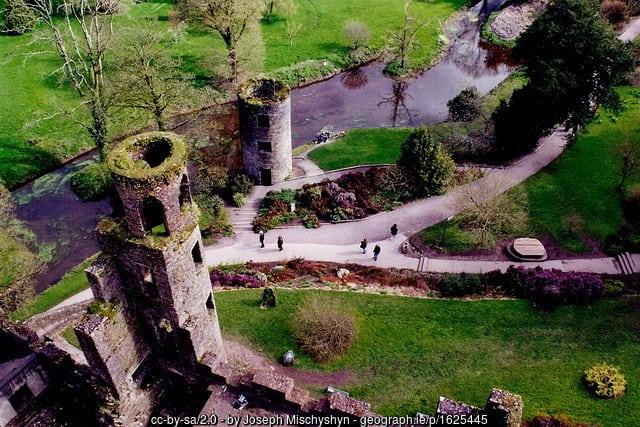 View from the top of Blarney Castle

Now the Scottish Stone of Destiny made its way back to Ireland as a gift from Robert the Bruce to Cormac MacCarthy, King of Munster, and owner of Blarney Castle. You see, Cormac didn't like the English much, so he sent five thousand of his men over to Scotland to help Robert the Bruce defeat the English at Bannockburn in 1314.

To show his gratitude to Cormac, Robert split the Stone of Destiny and the portion we kiss today was transported back to Cork by Cormac to find a home in the walls of his MacCarthy castle.

Another legend claims the stone may have been brought back to Ireland from the Crusades.  This myth claims it is the "Stone of Ezel." This is the biblical stone behind which David hid to escape his enemy, Saul.

Another biblical origin sometimes proposed, is that this is the stone which gushed water upon being struck by Moses.

The Queen Of The Banshees:

Another legend claims it to be a true Irish stone. When Cormac Láidir MacCarthy (meaning strong Cormac MacCarthy) was building his castle he got involved in a little dispute that required him to appear in court. He said a little prayer to none other than Cliodhna (pronounced Clee-on-nah), the Queen of the Banshees.

Through a dream he received her instructions to kiss the first stone he saw on his way to the courthouse, which he duly did. He then proceeded to speak with such eloquence he won his court case. The stone was brought back to his castle and incorporated into the parapet. 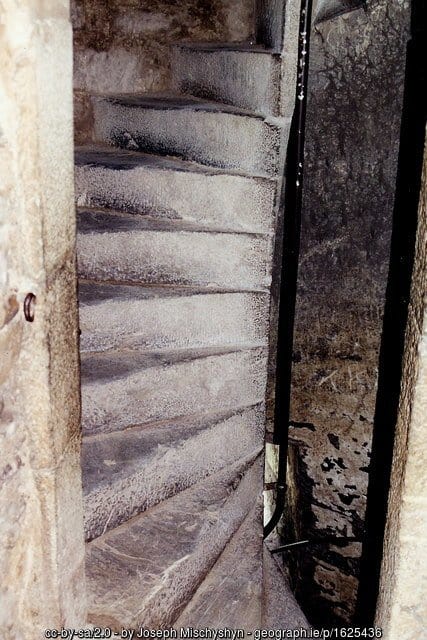 And there it remains to this very day - just waiting to be kissed. But only if you're strong enough, brave enough and, believe me, only if you're agile enough to complete the task.

Kissing The Blarney Stone - A Feat Of Endurance:

Kissing the Blarney Stone is a feat of endurance and not for the faint of heart.

First you must huff and puff your way up 127 steep steps to reach the very parapets of the castle walls. Then, when you finally recover from your endurance test, a little gymnastics are in order. 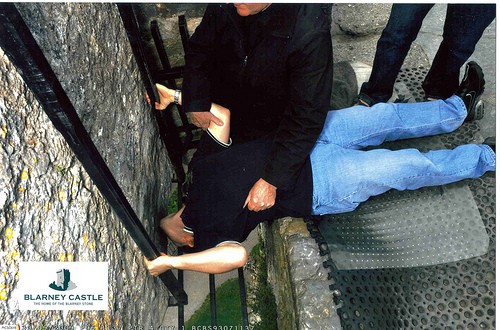 You must lie on your back and then twist your spine and neck into extreme extension, then pucker those lips, to land a smooch bang smack right in the middle of the infamous stone.

And beware if you don't have a head for heights. You can even see the ground, over 100 feet below, as you lean backwards.

Today a well trained and well practiced attendant helps all hopeful kissers to contort their spines into the requisite position, and luckily an iron railing has been placed to prevent any mishaps. Such was not the case years ago, and would-be kissers have succumbed to gravity, falling to their deaths in pursuit of eloquence. 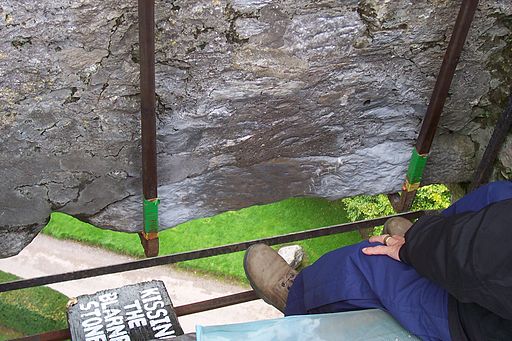 And if you're a germaphobe, good luck to you. On busy summer days over one thousand visitors pucker up to land their lips on this smooth and shiny slab of bluestone. If, for even one moment, you allow a thought of all that slobber cross your mind, you'll never manage to purse those lips.

But if you're anything like me, you'll just throw caution to the wind and kiss that flag. The gift of the gab is so worth the risks.

A Little Poetry To End Our Blarney:

And so as a final tribute to the power of the Blarney Stone, I thought I would quote Francis Sylvester Mahony, an Irish bard of the early nineteenth century, who wrote:

There is a stone there, that whoever kisses,

‘Tis he may clamber to a lady’s chamber,

Or become a member of Parliament.

A noble spouter he'll sure turn out, or

An out and outer to be let alone;

Don't try to hinder him, or to bewilder him,

For he is a pilgrim from the Blarney stone."

Don't Forget To Check Out The Gardens:

Now many tourists to Blarney get so carried away with kissing the famous stone, they miss out on one of the highlights of a visit to the castle.

The grounds surrounding the castle are magical. So if your itinerary allows, take a little stroll through the 60 acres of parklands and discover all that Blarney has to offer.

And so I hope, as you explore the landmarks of Ireland, you may discover the enchantment that makes Ireland so captivating. And remember, Blarney is a spot where myth and legend await.

Wishing you all happy travels in Ireland.