Many people all over the world wonder what exactly is Irish food. To help answer this question I created an Irish recipe e-book, to celebrate the wonderful food of my Irish childhood.

This collection features the dishes my mother, and her mother cooked in their Irish kitchens. I’ve tweaked these recipes for cooking success in America. 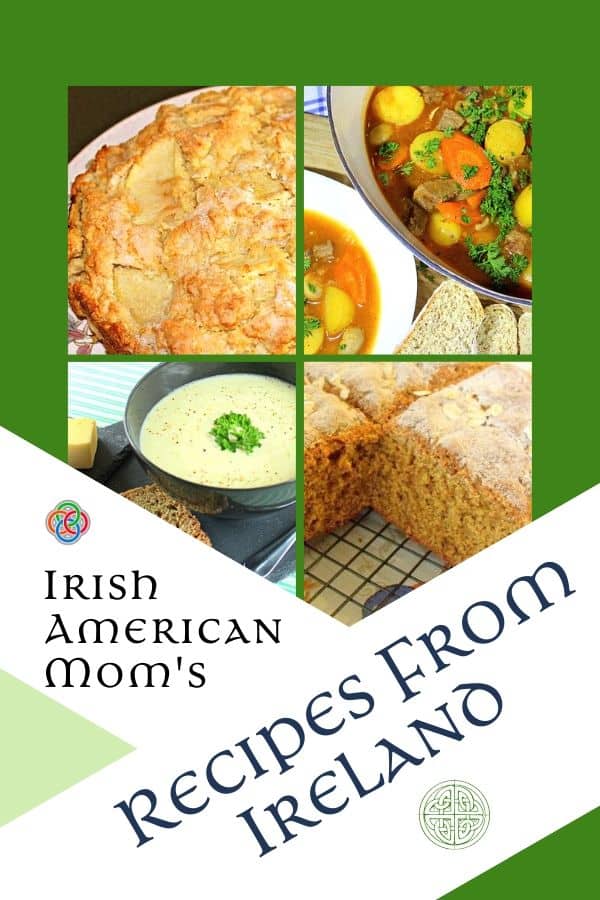 Exploring A Variety Of Irish Recipes Together:

I had so much fun putting this cookbook together for you. It features 21 recipes found here on Irish American Mom.

And here’s the good news! This Irish recipe e-book is totally free for anyone who would like to follow my recipes and ramblings. And believe it or not, I didn’t include any corned beef and cabbage recipes in this cookbook selection.

Simply fill out the form below and I’ll send your copy, directly to your inbox. It’s free to download. You can unsubscribe at any time, but I do hope you’ll stick around. Here we explore the appetizing dishes of Irish cuisine and celebrate our Irish heritage together.

The good news is that this free printable consists of recipes on individual pages or recipe cards. You can print the entire e-book, or simply print the recipes you like, each on its own separate page.

In America we immediately think of corned beef and cabbage as a traditional Irish dish. And when I tell Americans that Irish people don’t eat corned beef with their cabbage, they’re shocked.

Colcannon is gaining recognition as a delicious Irish side. However, in this collection I’ve included some lesser known Irish foods like sausage rolls, lemon and sugar pancakes, and carrot and coriander soup.

If you make a dish for a potluck, then feel free to print the matching recipe card. You might like to share your pride in your Irish cooking with family and friends.

On each recipe card you’ll find a link to the original recipe on my blog. There you’ll find step-by-step photo instructions if you need a little extra help or have questions about any recipes. 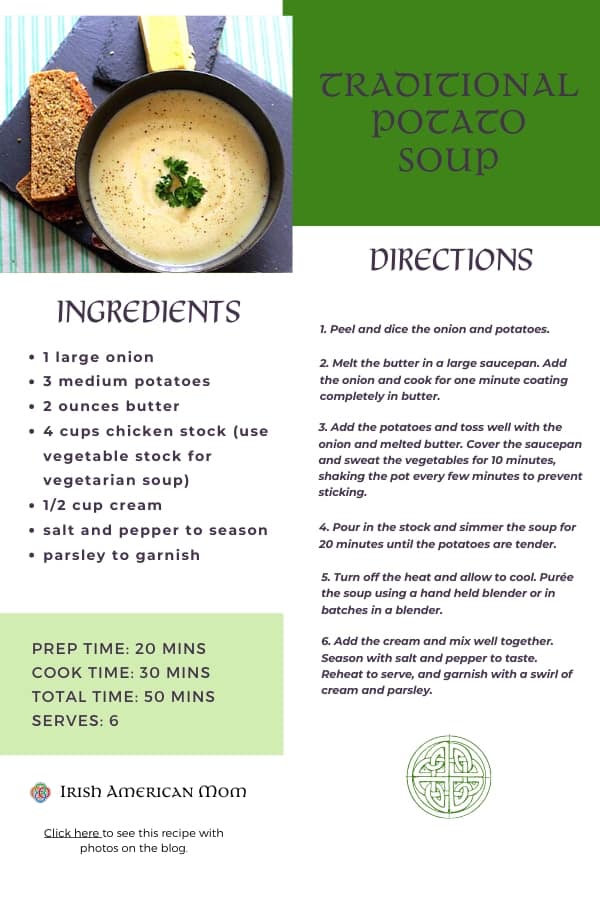 What Is Irish Food?

Irish food is wholesome and tasty. It’s a cuisine that gets a bad rap internationally. This may be because it does not rely heavily on added spices for flavor. Instead, onions, garlic and herbs such as thyme, rosemary and sage enhance these mouthwatering dishes to tingle your taste buds.

I cringe when I hear people ask, why is Irish food so bad? I totally disagree with that opinion, and I make no apologies for Irish food and cooking.

Irish cooking combines the produce of fertile fields, the bounty of our coastal fisheries, fruits, vegetables and delicious breads.

In years gone by, Irish cooks used a cast iron pot to cook over an open fire. But today’s recipes are cooked on the stovetop, or in your oven.

I hope you’ll enjoy my Irish soda bread, my farmhouse beef stew, a delicious Dublin coddle, and my boxty recipe. And if you have a sweet tooth, like me, then check out my chocolate biscuit cake recipe. It’s a perfect no-bake, easy treat to satisfy your cravings.

The History and Origins of Irish Food:

Irish cuisine and cooking methods were developed by the Irish people over the centuries and millennia.

When discussing the origins of Irish food it’s important to take note of three major time periods. The humble potato is the most influential factor in Irish food history. The three major era’s in Irish culinary heritage include:

For thousands of years our Celtic forebears cuisine was influenced by the produce of the land which did not include the potato.

From 5000 BC to the arrival of the potato in the late 1500’s the staple diet of the Irish was grain based. They grew oats and barley, and cooked porridge or gruel.

These grains were ground into flour for baking bread. Meat and game featured in this diet and dairy products such as butter and cheese were common foods.

Did you know that hospitality was compulsory in Gaelic Ireland? Every household was bound to welcome strangers under old Irish law. Feasting was part of this tradition, so sharing food together is part of our Irish heritage. 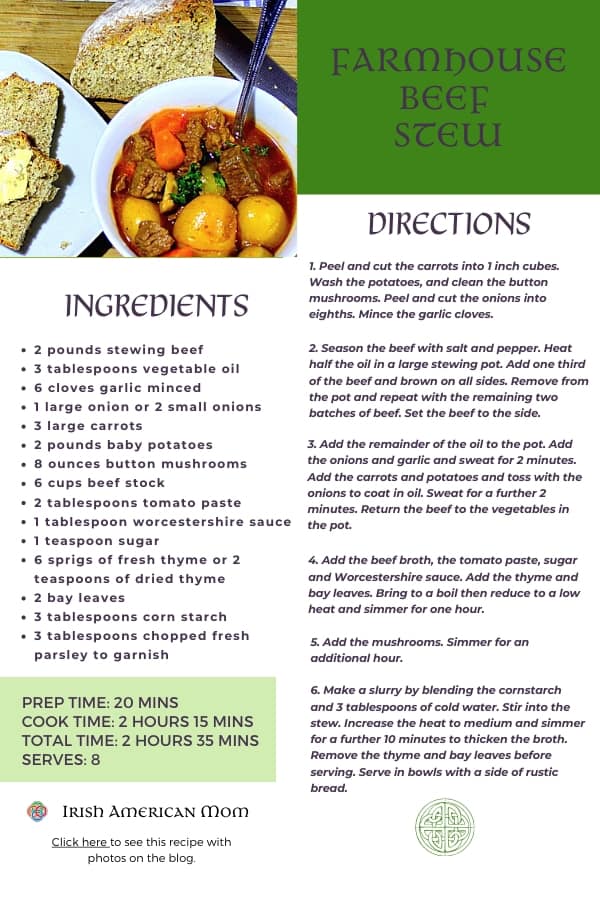 The Arrival of the Potato:

After the potato arrived in Ireland around the year 1570 everything changed. The humble potato originated in South America, but it thrived in Irish soil and weather conditions. Storing this vegetable was easy, helping provide food for the poor through the long winter months.

Harvests were bountiful, allowing many mouths to be fed from the produce of a small plot of land. Ireland’s population blossomed from around 1 million people in the late 16th century to between 8 and 10 million in the 1840’s.

The failure of the potato crop in 1845 resulted in devastation, and as the old saying goes, ‘the rest is history’. This tragedy transformed the fate of nations from Ireland to America, England to Australia, and Canada to New Zealand.

Today, I’ve only scratched the surface of the story of Irish food. If you subscribe to my emails, we’ll continue this journey of discovery, exploring our Irish heritage together.

The Irish style of cooking may have originated in Ireland, but was greatly influenced by those who invaded the island. The Vikings brought a Scandinavian influence. The Normans brought a French flare. Our neighbors in England ruled us for many years, leading to a mingling of our food cultures.

Over the centuries many Irish women worked in the big houses of England and Ireland. They filled the roles of housekeepers, chamber maids and cooks. They learned how to cook, perfected their skills, and developed recipes.

They shared their culinary expertise with their Irish families. This sharing of recipes and cooking techniques formed the foundation of what we recognize as traditional Irish cooking today.

I hope you enjoy these recipes from my home to yours. Let’s take pride in our Irish cooking heritage and traditional food. Let’s share our cuisine with the world.

I hope these recipe cards will help you spread the word about the glories of Irish food.