So why not coddle yourself with a heart warming, comforting Irish sausage stew on Saint Patrick’s Day, or any day of the year?

Dublin Coddle is a traditional Irish dish primarily made by true blue Dubliners, enjoyed throughout the year and not just to celebrate St. Paddy.

It’s a one-pot wonder full of potatoes, sausages, bacon and onions. Cooked slowly in water or broth the result is a filling stew loved throughout Ireland’s capital city.

Dublin Cooking At Its Finest

For real Dubs, coddle is a nostalgic dish. One that reminds them of childhood, and the tastes of home.

But this isn’t just a dish from the past. It’s alive and well and continues to be made in Dublin homes to this very day.

Confession time – I didn’t grow up eating coddle made by mother. She was born in County Cork so a Dublin stew did not feature on our weekly dinner menus. Now don’t panic. That doesn’t mean I never enjoyed a good bowl of coddle as a child in Dublin.

My best friend’s mam made a mean pot of coddle and I often had the pleasure of joining them for dinner. In fact, I had a habit of hanging around hoping for a bowl whenever I sniffed a pot of coddle simmering away on the cooker.

Made year round in Ireland, even in the summer months when temperatures rarely hit the 70’s, it’s perfect for St. Patrick’s Day or on cold, rainy evenings when living stateside.

My mother’s aunt married a Dublin man and she quickly became a coddle expert. My mother married a fellow Corkonian, so my dad never requested coddle dinner.

On the occasions I was treated to a delicious bowl of Dublin sausage stew by my great aunt or cousins, I devoured it, licked my lips and always asked for seconds.

Irish pork sausages, often called bangers, are key to a good coddle. Their flavor is far more subtle and less spicy than an American sausage, a bratwurst or a kielbasa.

This is true Dublin cooking. You can’t beat the healing properties of a good stew when feeling under the weather, and for Dubliners in the middle of flu season, coddle is their stew of choice when on the mend.

This is Dublin stew, not truly Irish stew. Sausages and rashers would have been readily available in Dublin in years gone by. Real Irish stew calls for mutton or lamb and this would have been more expensive in the city than in rural areas. As a result, lamb stew featured more often on the menu in Irish farmhouses than in the city years ago.

Back then sausages were inexpensive and when combined with plenty of potatoes and onions it was easy to feed a big family of children (or ”a big slue of childer’ as might be said in Dublin) with a simple pot of Dublin coddle.

This is a hearty dish with humble origins. It’s everyday cooking at its best, and comfort food if you hail from Dublin.

No Browning of Sausages For Authentic Boiled Coddle

One of the big questions is whether the sausages should be browned before stewing them when using an authentic Dublin Coddle recipe.

Some coddle eaters would be aghast at the idea of first browning the sausages in a frying pan before boiling the stew.

In fact, if you ask a Dubliner how to make coddle, you will probably be told to throw sausages, rashers, onions, and potatoes into a pot, sprinkle them with pepper and half cover them with water. Boil it up, then simmer it for two hours until the spuds are tender.

Now this method works well to make sure the sausages and rashers are cooked through, but there’s something about pale, anemic looking sausages that I don’t find appetizing. My trick is to brown the outside of the sausages before adding them to the stew to make the color palate of the final product more eye appealing.

Another tip is not to bother adding salt. The rashers are plenty salty without overdosing on Ireland’s favorite seasoning. The bacon fat adds lovely flavor depth. Plenty black pepper is needed to give this stew a little kick.

White pepper would traditionally have been used in Dublin, but now that black pepper is readily available in Ireland as well as America, I use black pepper

Also, traditional coddle was usually made with water. I like the added flavor chicken stock gives to the dish. Beef stock works well too, but if you’re a purist, then stick to plain old water for your coddle.

You may be more accustomed to eating corned beef and cabbage to celebrate your Irish heritage, but if your family hails from Dublin I recommend you try a a bowl of coddle instead.

And so without further ado, let’s learn how to make Dublin Coddle.

Here’s a quick list of ingredients. You’ll find exact quantities in the recipe card at the end of this post.

Feel free to add a few cloves of garlic if you wish. Garlic would not have been as readily available as onions to the poor of Dublin, so I leave garlic out of my Dublin sausage stew.

Chopped leeks and carrots are other options that can be added to this stew, but they are not traditional ingredients.

Bay leaves and fresh thyme are herbs that could also be included in your ingredient list. Once again they are additions to a basic coddle recipe.

First of all, you need to make a decision. Are you going to be a traditionalist and eat pale boiled sausages in your stew? Or do you prefer how sausages look more appealing when browned a little in a pan?

I always start by browning the sausages in a hot pan with a tiny little bit of oil. I like a brown tinge on my sausages, rather than a pale white sausage in coddle.

If you prefer you can brown the sausages under a hot broiler (or grill, as we would say in Ireland. A quick vocabulary note – a grill is a barbecue and a broiler is a grill on the other side of the Atlantic).

Now be careful not to overcook the sausages. Just a quick minute or two on all sides to brown the outer layer. If you cook them through they’ll be a little dry in the stew.

Put the sausages to the side as you prepare the veggies and bacon.

Peel and slice the onions, separating the pieces into rings.

Some people like to cut the onions in wedges, but my preference is for onion rings.

Peel the potatoes and cut them into one inch wedges.

Some cooks slice the potatoes into rings but I prefer chunkier potatoes in my stews.

I recommend using floury potatoes, such as russets. Yukon Golds will work out fine, but they tend to be waxy potatoes compared to other varieties.

Now prepare the bacon or rashers by slicing them into one inch pieces.

Feel free to remove the rinds from the bacon pieces, but I keep them. I like the flavor the bacon fat adds to the stew.

Canadian bacon works well instead of Irish rashers, but if you like the taste of real Irish rashers they are available from Food Ireland.

Now it’s time to layer the ingredients. Start by putting half the onions at the bottom of a large dutch oven or stew pot.

The onions at the bottom of the pot create a nice base for the other ingredients to sit on.

A cast iron pot works best, but a slow cooker or crock pot also works great for cooking this bacon and sausage casserole. It would take about 8 hours on a low setting to cook in a crockpot.

Next add four of the sausages and half the bacon to the pot.

Now add half the parsley and grind some black pepper on top.

Layer half the potatoes on top of the onions and meats.

This is a layered stew that simmers slowly to cook all of the ingredients.

Now repeat the layering again, starting with onions, then sausages and bacon, parsley and pepper, and finally potatoes.

Add the stock or water and bring to a boil. Once the liquid boils lower the heat and simmer for 2 hours on the stove top.

Alternatively, you can transfer the oven proof dutch oven to a pre-heated 300 degree Fahrenheit oven and let it cook slowly for 2 hours.

The liquid should not completely cover the ingredients but should be about one inch below the top. If the liquid reduces too much during cooking top it off with a little more hot broth or boiling water.

This stew is cooked low and slow. A gently simmer is all it takes for all these delicious flavors to meld together.

Season as you like, but the rashers are plenty salty in my book.

Coddle is often eaten with a cup of tea and Irish soda bread.

I went for a pint of Guinness and buttered, crusty bread.

This recipe should be plenty for four good helpings. 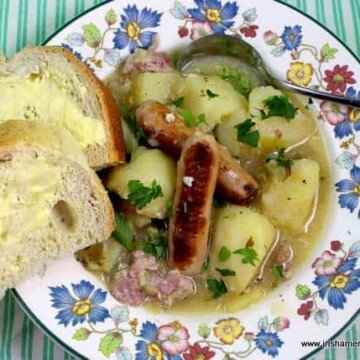 In Ireland, many like to add some brown sauce over the top of their coddle.That’s YR sauce, Chef sauce or HP sauce is the English version. I didn’t have any on hand for my photo shoot. But a discussion of Ireland’s favorite condiment, brown sauce, is a good topic for a post on another day.

Anyways, there you have it. My version of Dublin Coddle – a wholesome, hearty, everyday stew enjoyed for centuries by Dubliners.