Scalteen is an Irish tipple from many years ago, enjoyed by our ancestors when they were feeling under the weather. It's simply an Irish whiskey milk punch.

There are many different recipes for this hot drink. In days gone by it was a mixture of whiskey, whisked eggs and butter, and some scalteen makers even added beef broth to create a truly hearty brew. 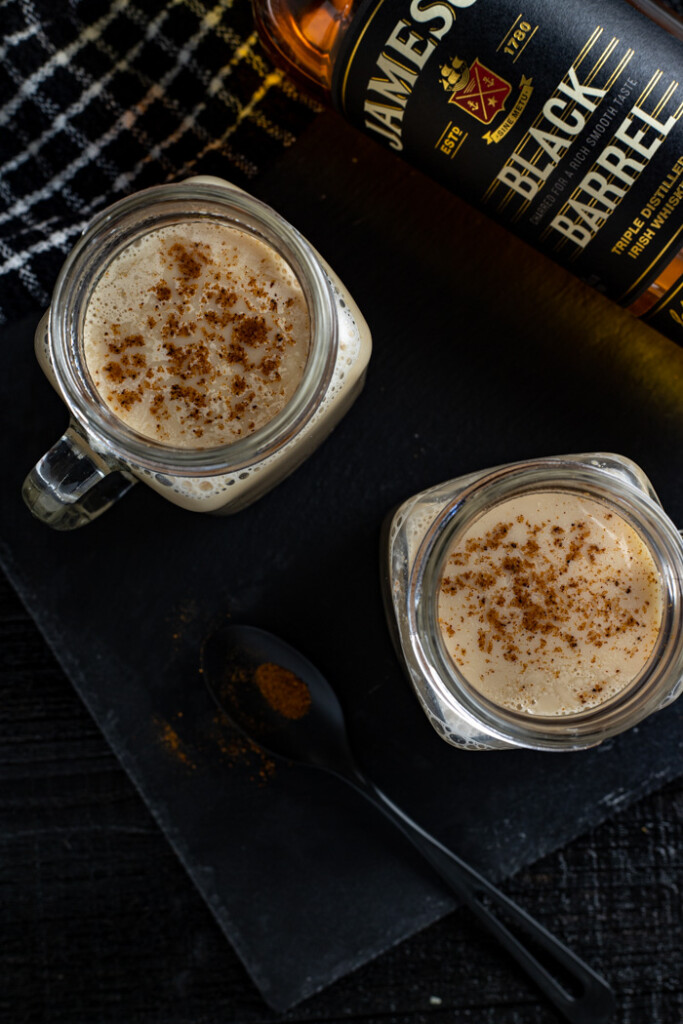 Others preferred a mixture of boiled whiskey, butter, eggs, sugar, and hot milk when concocting this ancient cure for a chest cold.

Today's recipes tend not to use butter and eggs, but instead are a combination of hot milk, whiskey and honey. Ground ginger or nutmeg can be used to add a little spice and flavor.

So let's explore the origins, history and recipes for Scalteen, an old Irish tradition.

Scalteen - A Cure For Colds and the Winter Blues:

When cold fall and winter days are upon us, and flu season is swinging in to full gear, many of us need a toasty brew to 'warm the cockles of our hearts' and to give us sustenance after braving the elements.

Chances are you may never before have heard of scalteen, but it's the drink our ancestors chose to ease their winter blues. Move over hot toddy, scalteen was the preferred cold-fighting, flu-battling brew of our ancestors. 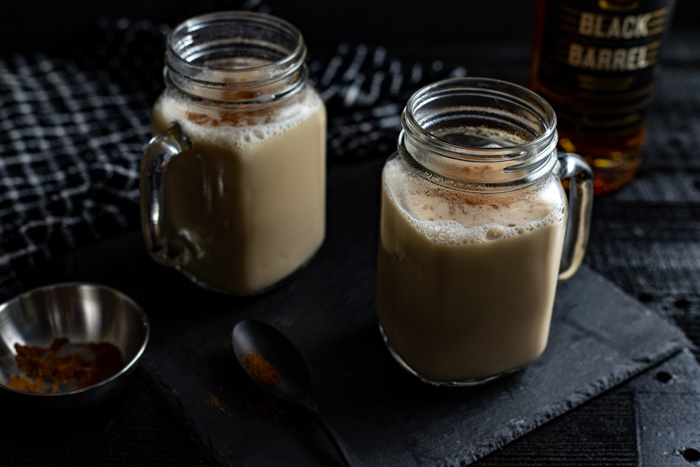 Served to those with snuffles, sneezes and scratchy throats, scalteen was the doctor's order for many in Ireland in the days before antibiotics or even doctors.

Here's an old Irish saying highlighting our ancestors belief in this ancient cure...

What butter and whiskey cannot cure,

there is no cure for.

Here is the original saying in the Irish language (Gaeilge - one of the Gaelic or Celtic languages of Europe.)

Here is a sound file for pronunciation....

Plus here is the phonetic pronunciation....

Scalteen can be spelled in many ways including the Irish or Gaelic version scailtín or scaoiltín. It is pronounced phonetically like skawl-teen.

In some areas it is known as scaillín.

Scalteen is a hot drink, as the name implies, sounding very close to the English word 'scald.'

And be very careful, not to scald your tongue. Let your scalteen cool before diving in. 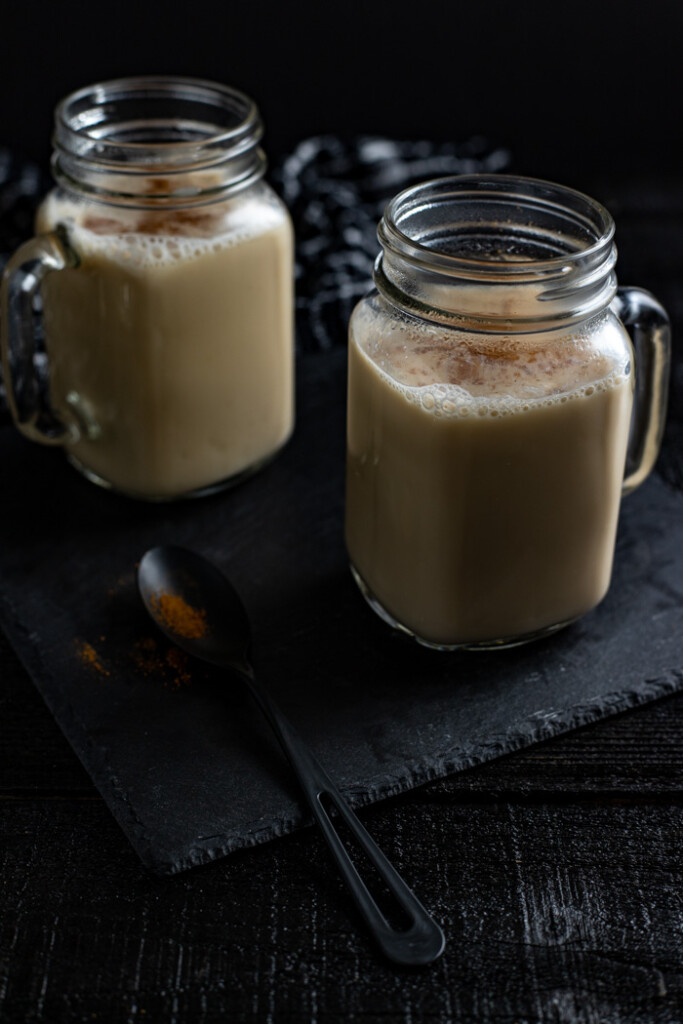 Traditional scalteen, consisting of whisked eggs and butter, was not easy to make. The eggs had to be whisked well and added slowly to the hot liquid to avoid curdling.

The egg and bone broth version of scalteen was not just a drink. As we say in Ireland, 'there was ate'n and drinking in that.'

In Diarmaid Ó Muirithe’s book, 'Words We Don’t Use (Much Anymore)' he includes a description for making scalteen, which he heard from a man in County Tipperary.

"Add half a bottle of whiskey, two whisked eggs and a lump of butter to a pint and a half of strained beef broth to which salt and black pepper has been added. Heat the mixture well but do not boil."

Heed the Tipperary man's warnings about not boiling the mixture. If the whiskey and butter are overheated a harsh burnt flavor is created. If under heated the ingredients don't blend to create a creamy, smooth scalteen.

Making good scalteen took great skill and practice and an expert scalteen maker was highly appreciated by those who swore by the health benefits of this ever-so-Irish drink.

Now don't worry. I'm not going to share a beef broth whiskey punch with you today. I don't think we're ready for a bone broth liqueur to replace our beloved Irish cream liqueur. (Or maybe I've discovered a unique, but crazy business idea.) 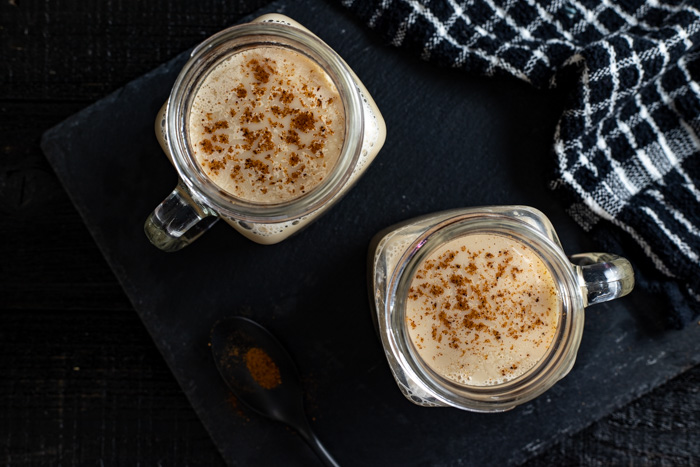 The most infamous drinkers of sclateen were a group of Anglo Irish aristocrats in the 1700's who formed a society called the Hell Fire Club. They met in the foothills of the Wicklow Mountains at a hunting lodge on Montpelier Hill.

They drank pots full of scalteen and their ensuing wicked behavior is still part of the local lore. The Irish Hell Fire Club was active in the years 1735 to 1741,. Stories of their debauchery would put anyone off the hearty scalteen they drank by the bucketful.

Their club emblem was a black cat, and the ruined remains of the building where they once met for scalteen fueled nights of divilment, is said to be haunted by a cat. 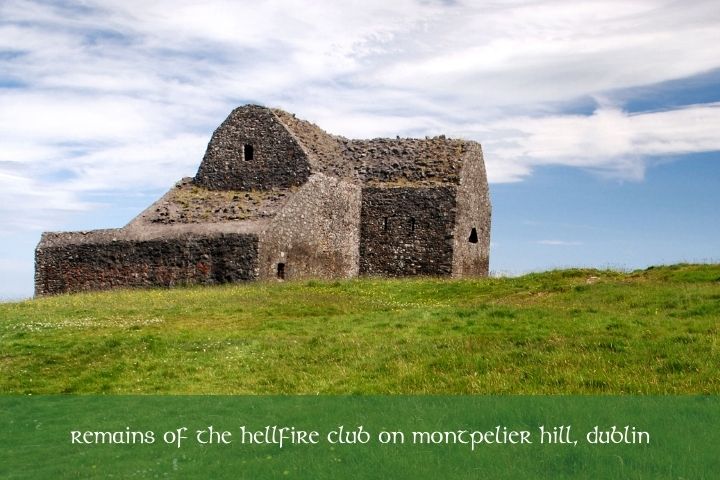 Irish Whiskey Milk Punch recipes date back to at least the 1700's. It was bottled and sold in the 19th century - I suppose we could say it was the original Irish cream liqueur.

The origins of the now famous Irish Cream made by Baileys may be found in scalteen.

Queen Victoria must have enjoyed a drop or two of scalteen, because in 1838 she issued a royal warrant to the company of Nathaniel Whisson as "purveyors of milk punch to Her Majesty," according to David Woodrich in his book, 'Punch: The Delights (and Dangers) of the Flowing Bowl.'

"Ah now, will you have a drop of scalteen, your Majesty, and forget your fancy milk punch?" was never uttered in Buckingham Palace, I'm sure. 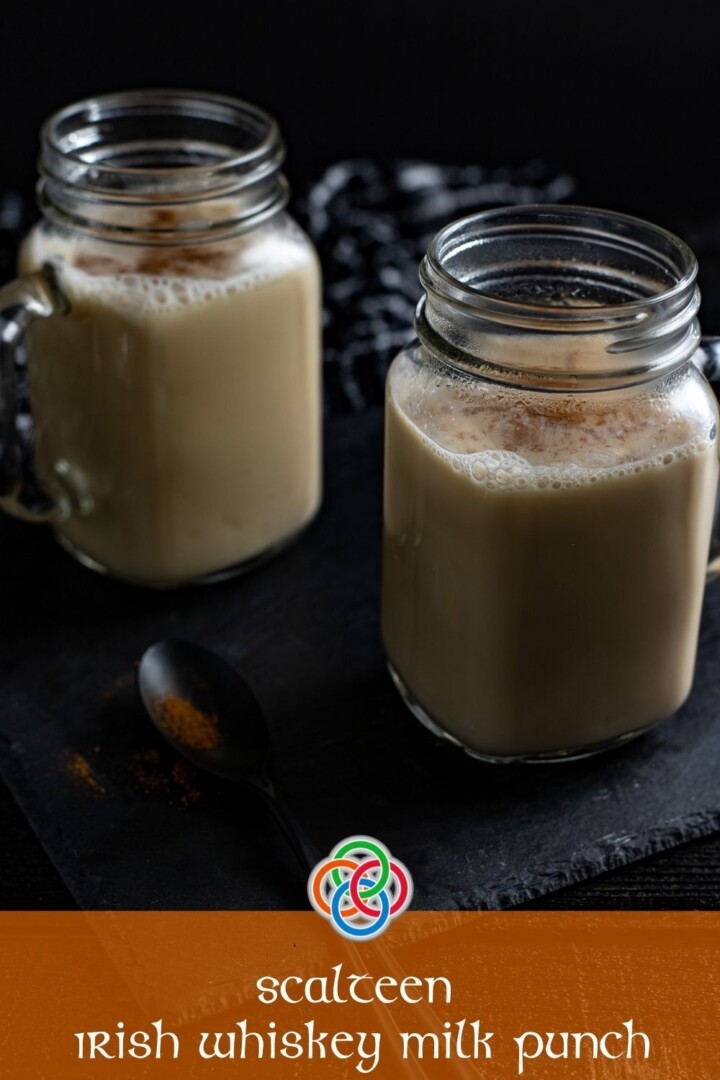 But however delightful Queen Victoria may have thought her milk punch to be, she was simply enjoying a lovely taste of Ireland.

And so without further ado, let's make ourselves a few cups of scalteen or fancy Victorian milk punch. 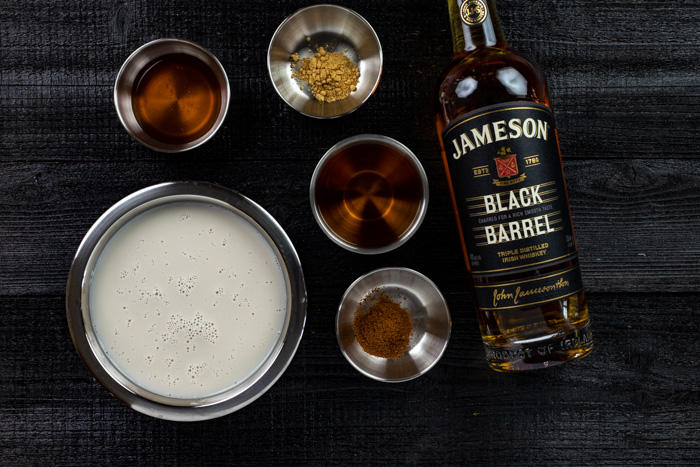 Pour milk and whiskey into a small saucepan. 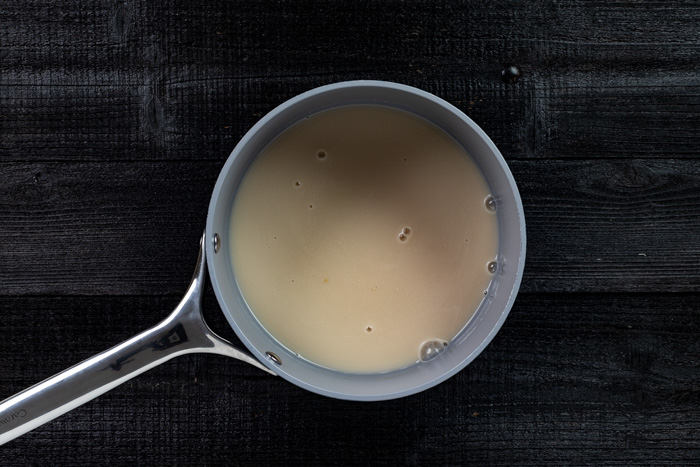 Whisk in the honey and ground ginger. A small pinch of cinnamon can add an extra depth of flavor, but would not be a traditionally Irish addition. 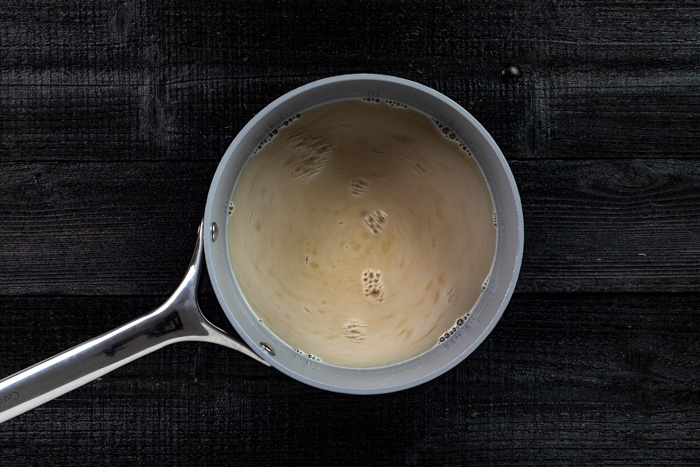 Heat the mixture slowly while whisking.

Do not let it come to a boil. 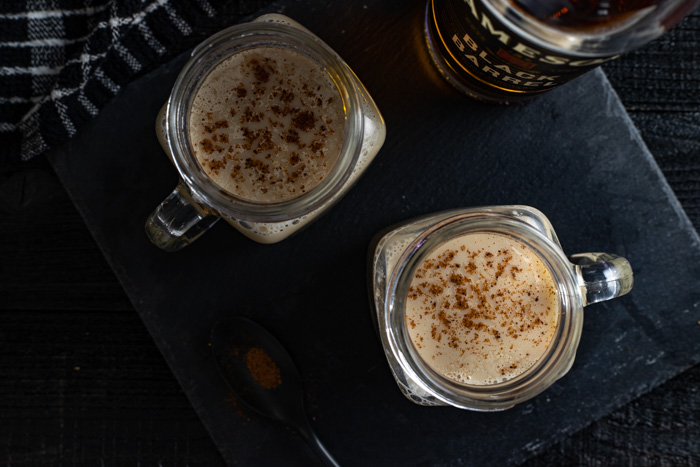 Pour into mugs and top with grated nutmeg.

And there you have it - a simple recipe for making scalteen. I hope this Irish milky brew will warm the cockles of your heart on cold winter days. 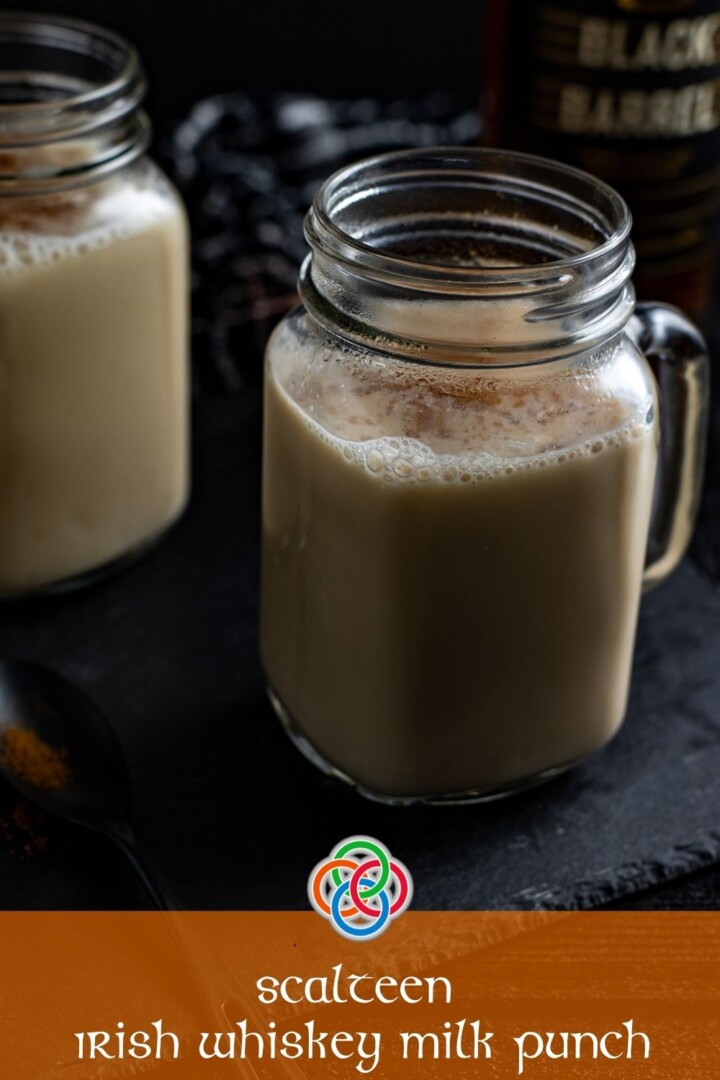 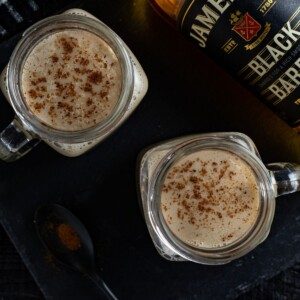 I hope you enjoy this taste of Ireland, especially on cold and chilly evenings when a little pick me up is the order of the day.