A 99 Ice Cream Cone is a favorite summertime treat in Ireland. Loved by all, both young and old, soft serve ice cream in Ireland is the best in the world in my book.

Soft, creamy, delicious ice cream is swirled on top of a wafer cone and topped with a flake, a crumbly stick of Irish milk chocolate. 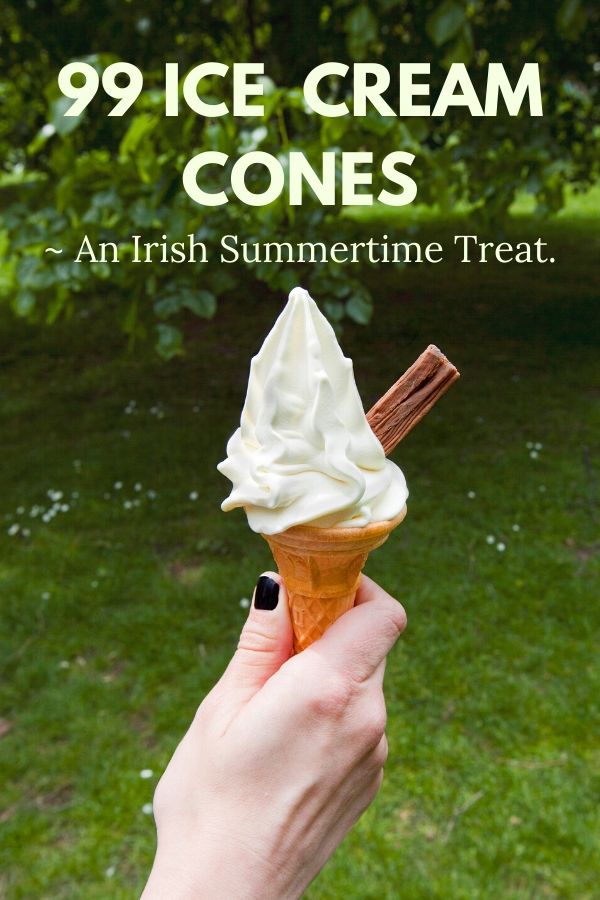 These plastic replicas of Ireland's favorite summer time treat beckon to us, reminding us that it's always time for a 99. 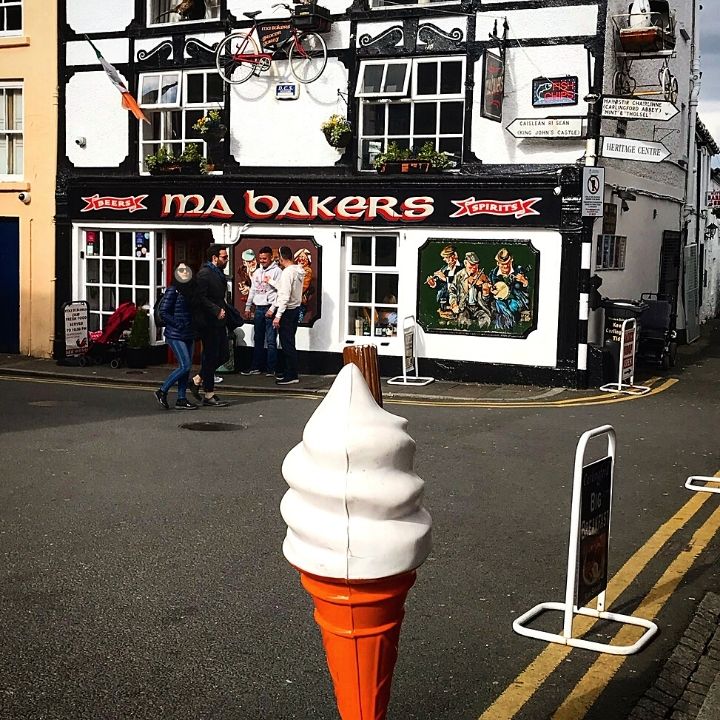 If you've ever taken a trip to Ireland then you will know exactly what I mean when I mention a 99.

And if you've never been to Ireland, but plan on taking a trip there someday, then it's important to learn all about 99 ice creams.

A "99" is a soft serve vanilla ice cream in a wafer cone with a stick of flaky milk chocolate lovingly placed at the side.

That stick of flaky milk chocolate is the distinctive feature of a 99. 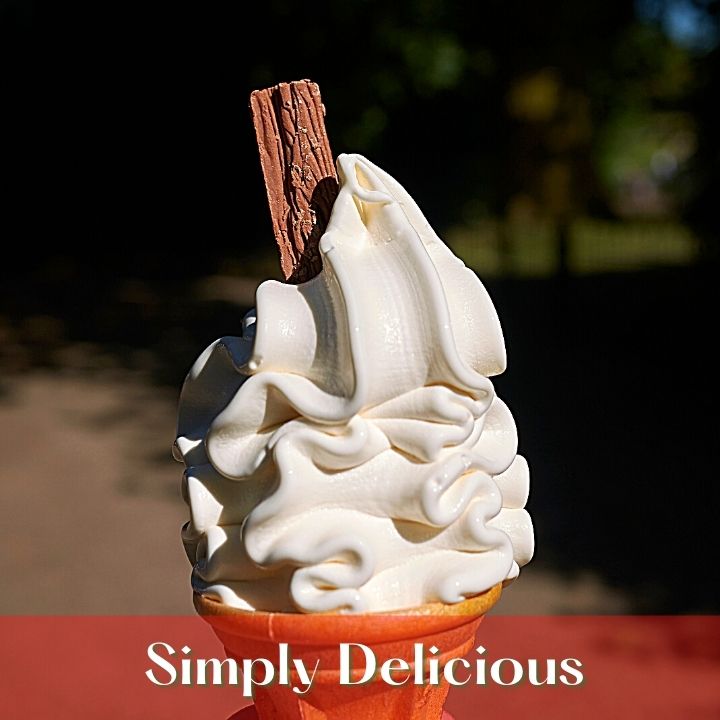 Topped with a Flaky Chocolate Stick

The milk chocolate flake can be placed on top, but usually it sticks out at the side.

The chocolate is a very specific crumbly variety made by Cadbury and known as a Flake.

These chocolate bars were first developed in 1920 by the Cadbury company in England at their Bournville factory. By the 1930's they were producing half length sticks of Flake specifically for topping off ice cream cones.

An employee at Cadbury noticed how excess chocolate dripping from moulds cooled in layered ripples and was inspired to create this famous chocolate bar. 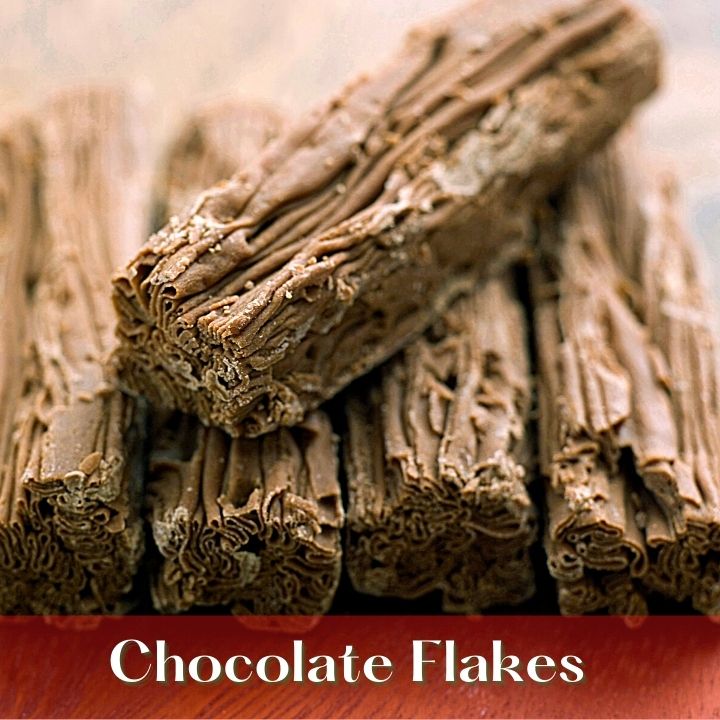 The exact process for creating Flakes is deemed to be a top secret and never shared by the good folks at Cadbury.

Flake bars today are either made near Cairo in Egypt or in Ireland. The Cadbury factory is very close to my first Irish home in Coolock in Dublin.

One of the girls in my class at school in Dublin in the 1970's had a father who worked in the Cadbury chocolate factory. Everyone thought it was the coolest job anyone could have.

Shortages of 99 flakes for the summer of 2021 caused panic in Ireland and England at the thought of no chocolate in 99's this year. But the summer was salavaged by Cadbury, and the customary chocolate stick is still available.

When and Where Were 99 Ice Cream Cones Invented?

99 ice cream cones are a summer tradition all over the United Kingdom and Ireland.

Exactly when and where they were invented and how they got their name is not exactly known for sure. However, there are many theories out there.

The most commonly told story is that they were invented in the town of Portobello in Scotland. 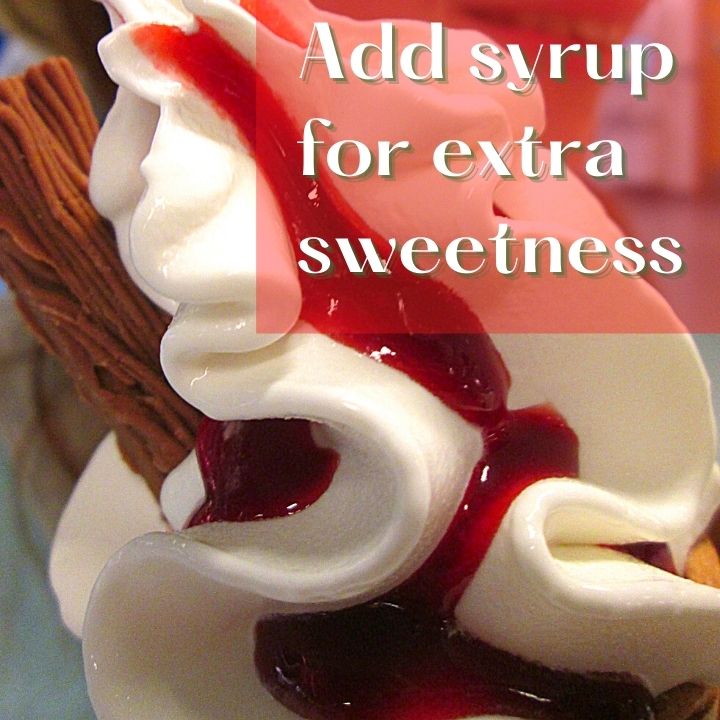 An Italian man, named Stefano Arcari moved there after the First World War.

He opened an ice cream shop, in good Italian tradition and began to serve a vanilla creamy ice cream sometime around 1922.

Now his ice cream shop was located at number 99 on the High Street in Portobello, and legend has it that the number of the shop was given to the ice cream.

You can read all about this theory on the website Good To Know.

Now these ice creams grew in popularity and spread all over the British Isles including Ireland. 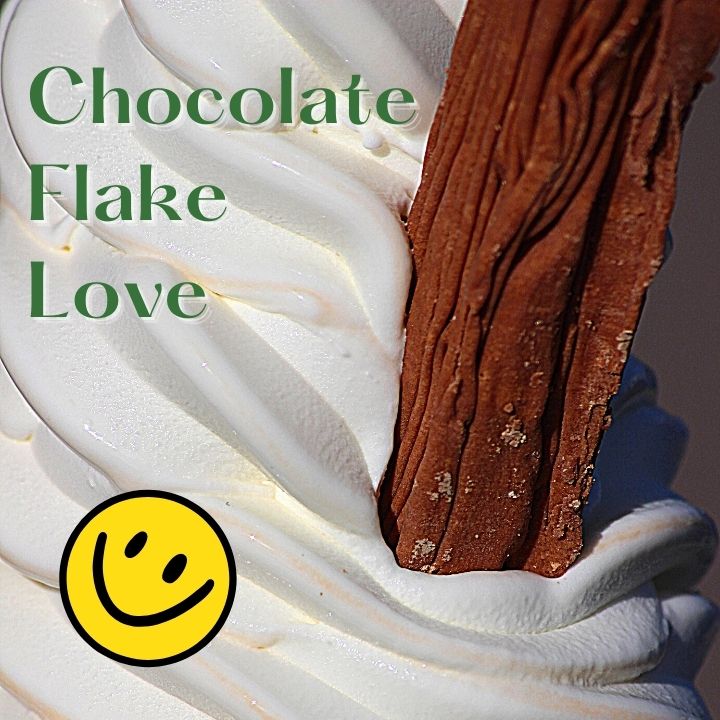 On the UK Cadbury website they discuss how in the 1920's they worked to create a smaller version of their chocolate flake to help Italian ice cream vendors serve it with their treats.

They also propose another theory for the naming of this ice cream cone.

"In the days of the monarchy in Italy the King has a specially chosen guard consisting of 99 men, and subsequently anything really special or first class was known as "99" - and that his how "99" Flake came by its name." 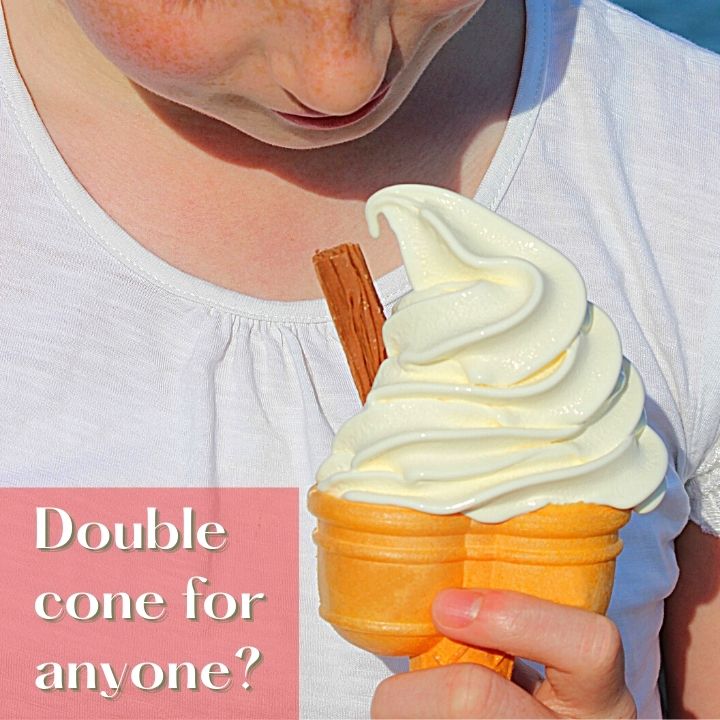 Another theory for the naming of this favorite summer treat is that the name was invented by the Italian immigrants who first started selling it in Britain.

Most of the Italian troops who fought in World War I were born in the year 1899. and the were known as ‘i Ragazzi del 99’.

In English this means  ‘the Boys of ’99.’  The beloved ice cream was named after them.

Now you may think that soft serve ice cream is the same all over the world.

There are plenty of soft serve ice creams available all over the United States, and the people of New Jersey rave about their soft serve frozen custard. A trip to the Jersey shore is never complete without a frozen custard.

Now I have tasted way too many ice creams over the years. From frozen custard to frozen yogurt to plain old vanilla ice cream, I've sampled them all.

And the winner in my book, is a good old Irish 99 cone.

I'm totally biased I know. It's the tastes of our childhood we remember and 99's were part of my Irish childhood. 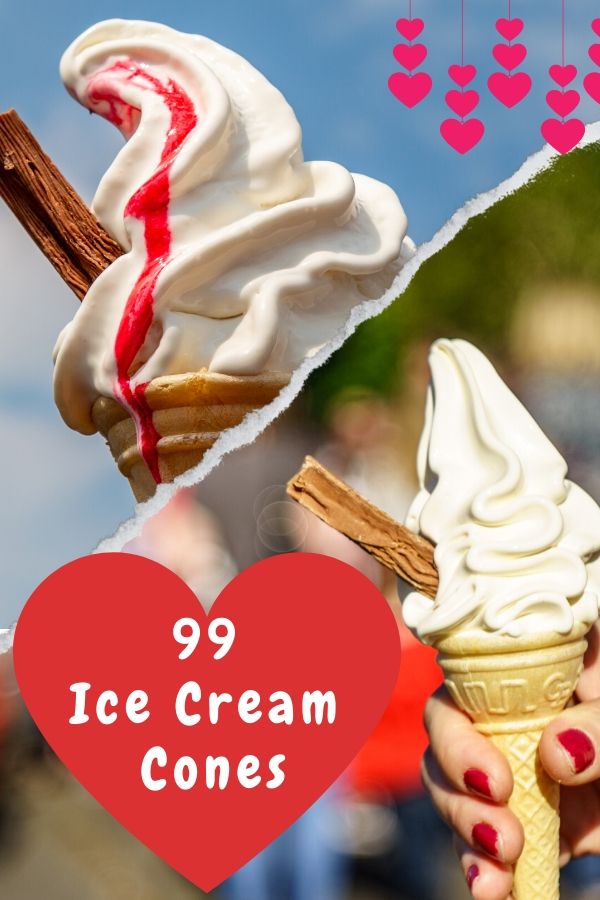 A trip to the beach wasn't complete until we held a delicious 99 cone in our hands and savored every precious lick of its creaminess.

Now the original inventor of soft serve ice cream is often said to be Mr. Carvel himself. But this American ice cream was invented in 1934 when Mr. Carvel's truck broke down and he had to sell his ice cream before it melted.

This date is after our 1922 story from Portobello in Scotland. But we don't know if Stefano Arcari used soft serve vanilla ice cream or gelato for his 99's.

Also, I don't believe Stefano would have had the amazing ice cream vending machines, that continuously whip and combline cream, milk and sugar to create this dreamy, smooth and frozen combination. 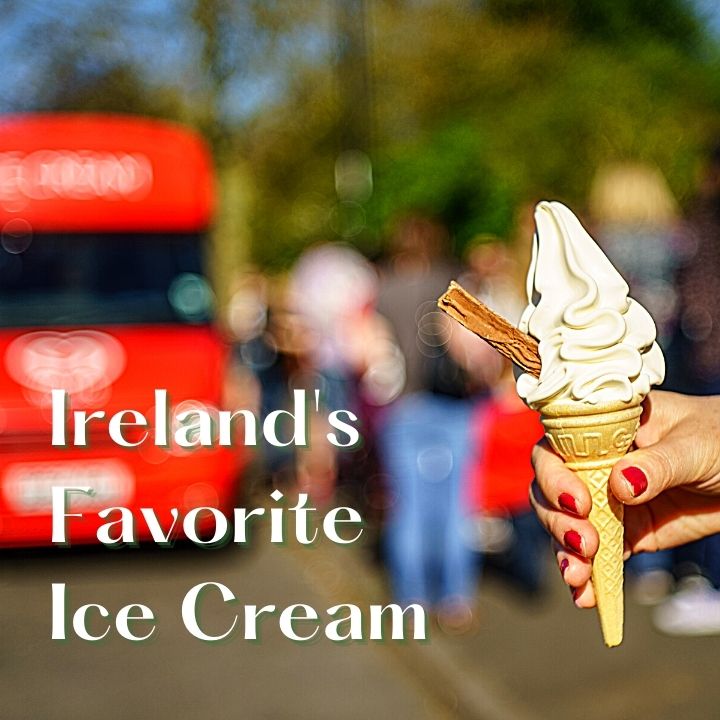 We may never know the exact origins of soft serve vanilla ice cream. but my bet is that it was first created stateside.

However the technology was shared around and the world, when made with Irish creamy milk, soft serve ice cream is taken to the next level of deliciousness altogether.

If you ever take a trip to Ireland in the warmer months, then take my advice. Treat yourself to a 99 ice cream.

When I was a young girl in Dublin in the 1970's ice cream vans often visited our road during the summer months.

You would hear their jingle a mile away.

They played it loudly so that children had plenty of warning the ice cream man was on the way. Enough time to go pester your mom for a few pence to buy a 99. 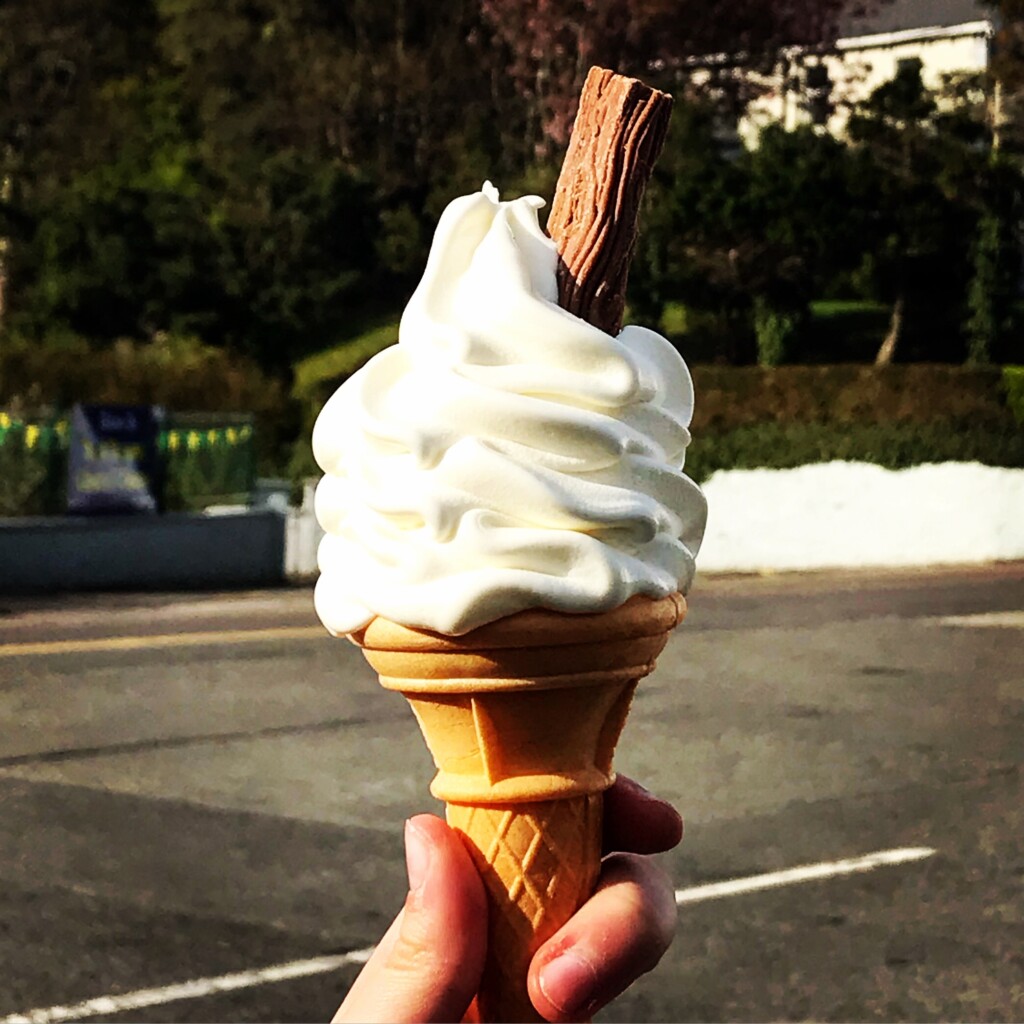 I can't remember exactly how much they cost back them. Was it 10 pence or 20 pence? If you know, please tell us in the comment section.

No matter what price they were, they were worth every penny.

Today they cost around 2 euro, and they're still worth every penny.

Do you have fond memories of 99 ice creams, or do you still enjoy them to this very day?

99's are the best ice cream in the world for many an Irish person all over the world. Or perhaps you preferred an ice cream sandwich - vanilla or raspberry ripple?