The Shamrock Shake is a green mint-flavored milkshake loved all over the United States. Each spring, I keep my eyes peeled for this classic, limited-time menu item at McDonald’s.

To be honest, there’s nothing quite like that delicious mint flavor blend of soft serve topped with whipped topping and a cherry on top!

The return of the Shamrock Shake is anticipated by many. People all over America look forward to when St. Paddy’s Day is approaching, when once again they can savor a Shamrock Shake.

However, why not enjoy a Shamrock Shake any time of year? You can make your very own green shake at home.

But before sharing my recipe, let’s learn a little about this famous Irish American beverage.

History of the Shamrock Shake

First of all, there are many reasons to love this delicious green milkshake and its companion, the Oreo Shamrock McFlurry!

Since then, McDonald’s Shamrock Shakes have had a rich history with many twists and turns. Believe it or not, they were not an instant success.

Still, Shamrock Shakes were behind the origination of the first Ronald McDonald House, which was created to support families with sick children.

Evolution of the Shamrock Shake

It’s had some flavor evolutions from the original shamrock shake to become the mint shake it is today. It became a trendy drink, a cult classic in fact, that people all over the United States count down to each year.

They’ve had lemon-lime, mint, and chocolate flavors throughout the years. They were even plain old dyed vanilla milkshakes back in the day.

Evolutionary ingredients like Oreo cookies were added as time passed, making them all the more delicious. They get released in February every year if you aren’t familiar with their availability time frame. They’re available until St. Patrick’s Day.

Here’s a heart warming story about how this green drink became so popular.

When the daughter of a Philadelphia Eagles player became sick with leukemia in 1974, the team made a donation to her oncologist, Dr. Audrey Evans, to help start improvements at Philadelphia Children’s Hospital.

Upon accepting the check, the doctor said… “You know what else we need?”

She envisioned a refuge and place where families could stay while their children were being treated in hospital.

The Philadelphia Eagles teamed up with McDonald’s, so that a share of the proceeds from the next McDonald’s promotion would support this worthy cause. The next promotion was none other than the Shamrock Shake. And that’s how this famous drink helped start the Ronald McDonald House charity.

This story reminds me that sometimes the most beautiful things can come from difficult times.

People eagerly await the arrival of Shamrock Shake season so they can savor this delicious treat.

From the middle of February through late March, the Shamrock Shake is available at most McDonald’s locations throughout the United States.

However, it may be a good idea to call your local restaurant to make sure they’re stocking it, before making a special trip just for a shamrock shake.

That’s something I would do, an expedition in search of a shamrock shake since I so look forward to the annual return of my favorite green drink.

However, there’ll be no need to wait anymore, since I’m going to share my delicious, minty copycat recipe today. From now on you can enjoy a Shamrock Shake any day of the year.

I also love to see the color green all around me leading up to St. Patrick’s Day. It reminds me to speak up about the importance of Irish holidays and plan fun celebrations that my friends and family can enjoy with me.

Now, I’m not going to hide the fact that many Irish people living in America have a bit of a complex relationship with the evolution of St. Patrick’s Day.

It started as a celebration of St. Patrick, evolving into a massive American holiday that’s celebrated in a completely new way. (If you’d like to hear more about that, you can check out my blog post about the history of St. Patrick’s Day.)

While this is true, I see March 17th as a remarkable representation of being Irish American.

St. Patrick’s Day is a way to share my Irish heritage with others while enjoying American cultural items, including the McDonald’s Shamrock Shake.

Even if it’s not that time of the year, if your mouth is watering thinking about all this, you can make your own homemade Shamrock Shake!

Combining those simple ingredients, you can make a green shake with that unmistakable Shamrock Shake flavor.

Here’s what you’ll need to make your very own Shamrock Shake. You’ll find exact qunatitites in the recipe card below.

There are a couple modifications you could make if you’d like. After all, it’s your very own version! You can make a shamrock sundae and add chocolate syrup to make it a chocolate Shamrock Shake.

Or you could even throw in some Oreos or chocolate chips to make the minty milkshake of your dreams!

You don’t need to look to the McDonald’s menus to tell you how to enjoy this minty St. Patrick’s Day treat.

Making a homemade shamrock shake is super easy. A good blender does all the work.

Add the ice cream, milk, mint, and one drop of food coloring to a blender or liquidizer.

Blitz well until everything is completely smooth.

Use a handheld mixer to whip and thicken the cream until soft peaks form.

Top each shake with a swirl of cream and a cherry. 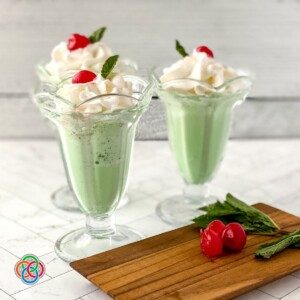 I love making copycat Shamrock Shakes at home, preferably while sharing my Irish American cultural heritage with friends and family. Talking to your whole family about how two cultures can come together and evolve is essential.

There are so many other details we could discuss! But today, I just wanted to share a lighthearted overview of why these delicious shakes are so important to me.

I hope this recipe will help you get your minty ice cream fix until the next Shamrock Shake season rolls around again.