Ireland’s hills and hedgerows are blooming with the golden glow of yellow furze. This prolific plant adds stunning color to the Irish landscape each and every year.

A Plant Of Many Names

Now this hill brightening plant bears many names throughout Ireland.

I grew up calling it furze. In northern counties this landscape illuminator is referred to as whins.

Other names include gorse and broom, but interestingly both furze and gorse are words with Anglo-Saxon origins.

Whatever you choose to call it, these spectacular, yet prickly plants are part and parcel of my Irish memories.

A Flower For All Seasons

With different species of gorse plants thriving in Irish soil, these yellow flowers bloom all year round. This long flowering season gave rise to the old saying ….

“When furze is out of bloom, kissing is out of fashion.”

Love, like hope, springs eternal. We all know kissing is unlikely to ever stop, and likewise gorse will unlikely never cease to flower in Ireland.

Furze or Gorse Whiskey and Wine

Yellow gorse petals are actually edible, and are used to make a special brew called gorse flower wine, a favorite of our ancient Celtic forebears.

These edible flowers have been used in salads, and for tea, and the buds were pickled like capers.

But be fair warned. Overeating can lead to an upset stomach due to slightly toxic alkaloids in the bloosoms.

Often seen in hedgerows, the prickly spines of the furze bush make it a good barrier for containing livestock.

Furze “grows like wild fire” making it a little invasive for some farmers’ liking. Before there were limitations on unlicensed burning, old furze growth was frequently burned back to help nourish the soil. The ashes of the furze were alkaline making them a perfect fertilizer.

New furze shoots where a food greatly enjoyed by cattle and sheep.

Here’s a short video highlighting the beauty of the Irish landscape, festooned in yellow furze blossoms…

Burning furze torches around farm animals was believed to promote fertility. Whether this fertility trick worked or not, the gorse smoke also helped to kill fleas and other unwanted creepy crawlies in animals’ coats.

In County Kerry furze was used to treat horses for worms, a fact I’m quite certain you never before thought you needed to know. Here’s an excerpt from the Irish National Folklore Collection ….

‘Get a few handfuls of the yellow blossoms of the furze and boil them in water. Give the water as a dose to the horse and this will cure worms’.

Furze or Gorse in Ancient Traditions

Like many other Irish wildflowers, the yellow furze of my homeland features significantly in ancient mythology and legendary lore.

In the past, a small sprig of furze was added to bridal bouquets, but like many old traditions there were rules associated with its use.

Only the bride herself could cut the furze for her floral arrangement. It was considered extremely unlucky to receive or give this prickly plant as a gift, because we as humans do not own these golden blooms. 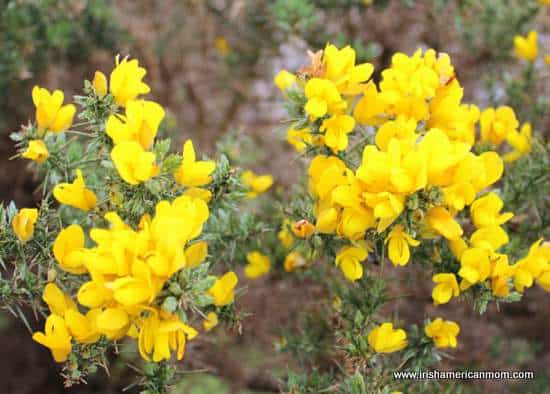 Property Of The Faeries

And so whom, you may ask, holds sway over these thorny bushes?

Of course, being Ireland, the magical owners of these prolific plants are none other than the faerie folk.

Furze bushes, like all other thorny bushes in Ireland such as hawthorn and white thorn, belong to the Sidhe, and often guard their portals to magical realms.

Judging by the amount of gorse growing throughout Ireland, it is one magical land indeed.

Gorse was used in ancient times for collecting gold. By lining the bed of a stream with furze plants our predecessors would capture gold dust flowing on the currents.

I believe gorse grows in California too, so I wonder if any prospectors used this ancient Irish technique at the time of the Gold Rush.

Bealtaine is the ancient Celtic feast celebrated on May Day. Gorse was considered a sacred wood and because of its high oil content may have been used to start the Bealtaine fires.

The Celtic god of light, Lugh, is linked to the furze bush, probably because of the golden glow of its vibrant yellow flowers.

Like many of Ireland’s edible wildflowers herbalists of years gone by used these plants for many medicinal purposes.

Children suffering from scarlet fever drank an infusion of the flowers.

Seeds were considered a treatment for diarrhea.

Bad breath was treated by mixing the blossoms with honey and using it as a mouthwash,.

And flower petals were strewn about on the earthen floors of cottages since they were thought to be a flea repellant.

And so there you have it … my little roundup of facts and magical lore surrounding these glorious golden blooms of Ireland’s landscape.

If you know any other tales or names for this native Irish plant, please let us know in the comment section below.

And for those planning a trip to Ireland this summer, I hope you’ll smile when you admire the Irish hills swathed in yellow blossoms.

You can say to yourself, ‘I know all about this furze, or gorse, or whins, or broom, or whatever on earth this magical plant is called in this neck of the woods.’