Phyllis Easterbrook is a writer who lives in Missouri. Her grandfather was born near Ballymena, County Antrim, and in today’s post, she shares some beautiful memories of her Grandpop, her family’s American journey, and lovely insights into life in the row homes of Philadelphia many years ago.

And so over to Phyllis for the next installment in our Immigrant Tales – Stories of Our Ancestors……. 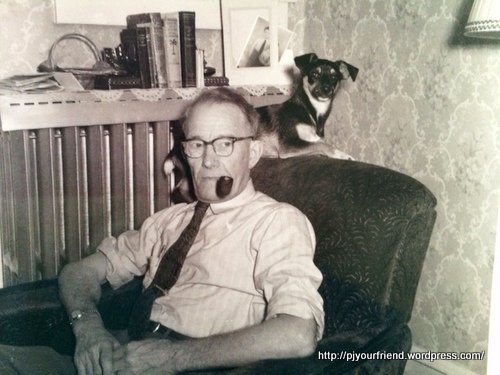 Grandpop smoking his pipe, with Suzy, his beloved dog

Grandpop was born in Ireland, in a small town called Ahoghill, which sits in The Borough of Ballymena, in Northern Ireland. He accompanied his parents to the United States as an infant, thereby making me a second-generation American on my father’s side!

In 1889, John and Elizabeth (my great-grandparents) left Northern Ireland aboard the ship Furnessia, which docked in the port at New York City, after a two to three week voyage. This was three years before Ellis Island was transformed into the major immigration station. They, no doubt, were processed at Castle Garden Depot in lower Manhattan.

John and Elizabeth arrived with five children, ages ranging from ten years old down to 9 months old. Grandpop was the 9 month old.

Before my family’s arrival in America, Ireland was a country dealing with the aftermath of The Great Famine. More than a million people died of starvation and just as many immigrated to other countries. The British government subsidized immigration to the US and Canada. The subsidy was a good thing for my ancestors, because at the United States immigration stations, some folks were sent away and back to their country of origin, if they could not prove they had adequate funds to support themselves and their families. 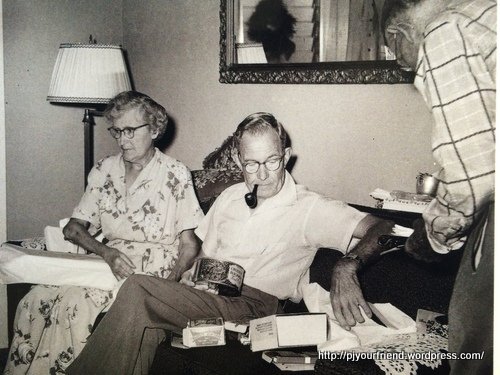 Grammy and Grandpop in Philadelphia – the missing digits on his left hand can be seen.

A Coal Miner In Pennsylvania:

Grandpop’s family settled in the coal mining regions of Pennsylvania with many of their kinsmen. It’s interesting and kind of sad that they settled in the coal mining region as back in their country, Grandpop’s grandparents were farmers, and his own father was a carpenter. Nevertheless, it was where they, and many of their countrymen, took up residence and made their home. Eventually two more children were added to the mix.

The story is told of Grandpop having a bit of a skirmish in the 8th grade. Apparently he had an altercation with a teacher, therefore deciding (to himself) never to go back to school. He went to the coal mines and secured a job, something his father never wanted any of his kids to do. So while his parents thought he was attending school each day, he was working in the mines. Eventually the school contacted his family, and Grandpop was found out. Somehow, I imagine, heated arguments ensued, he kept his job at the mines, and never went back to school. 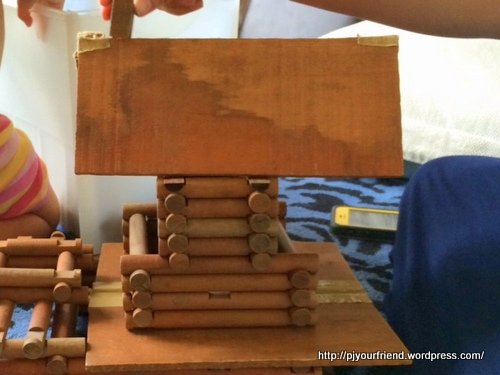 At some point, I believe in the late teen years, Grandpop and one of his brothers decided they would not live in the coal-mining region for the rest of their lives. They had the “world” to conquer. They left family behind and made their way to Philadelphia where they each met and married their wives, had children and settled down.

I remember Grammy and Grandpop living in a row home in Philadelphia. I loved to go there. It was inviting and friendly and fun. Grandpop was fun (in my eyes anyway). Apparently even as a young child he was a handful. It was told that he was playing with fireworks (forbidden) and they exploded. He lost two digits on his hands. One is his thumb digit. As an adult, he always, always, smoked a pipe and he used that thumb, or what was left of it, to press down the tobacco in the pipe. I always though it was very clever of him as that digit was just the right size!

When Grandpop settled in Philadelphia, he secured a job with Abbott’s Dairy. He worked there until he retired. He barely made enough to support the family (by now with three children) but it was a fun place to work so he kept at it. My dad (the oldest child and only son) tells of having to work at a very young age selling eggs, just to help make ends meet. 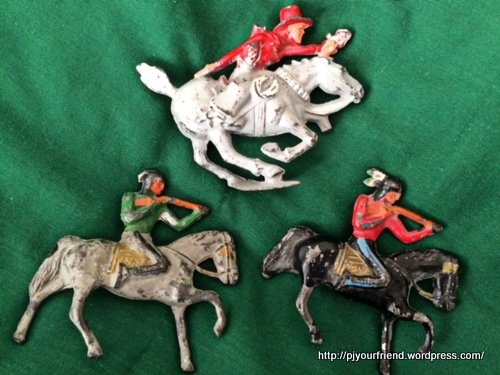 Grandpop was very creative and handy. He made his very own made-to-look-like Lincoln Logs, and I believe, crafted little cowboys and Indians, possibly made out of lead as they are heavy. He would be amazed and proud that even today, his great-great grand kids are still playing with the logs! (The little figures are put away, as no doubt they are covered in lead paint!)

Grandpop’s job at Abbott’s Dairy was as a mechanic and he put his skills to good use. Lack of formal education never seemed to hold him back.

The following comes from The Philly History Blog:

In 1937 they put out a book called Raggedy Ann and Maizie Moocow, with an ice cream driven plot (meant to illustrate the healthful benefits of ice cream).

Their street of row homes was a delight. Each connected with the other and if you sat on the tiny front porch and looked in both directions, you could wave to your neighbors probably ten houses each way. There was an alley in back where all the cars drove in and garages were under each home. Overlooking the alley, in between each home, was a tiny porch off the kitchen attached to the neighbors kitchen door. (the expression “back-door neighbors” comes to mind!) The porch was big enough for Grammy to stand on and yell down to us kids as we played in the alley to “put away our skates and come in for supper.”

At one end of the street was a little shop of some kind where one could buy the necessities – milk, bread, eggs, etc. At the other end, we could always count on a street vendor selling hot pretzels! Philadelphia Hot Pretzels! YUM! I know the tradition was to eat them with yellow mustard, but I was a holdout on the mustard. Just give me that big, soft, salty pretzel and I was good! Actually better than good!

Sometimes, if we were lucky, a little truck would come down the street playing a merry tune to get our attention. It was decked out in all pretty colors and on the back was a little tiny carousel with maybe four seats. I loved that thing and always begged Grammy for a ride. Money was so precious but she never said no.

Grandpop had a dog named Suzy. That dog loved Grandpop and the feeling was quite mutual. Suzy knew Grandpop’s schedule and was at the ready when it was come-home-from-work time. Sweet little dog! 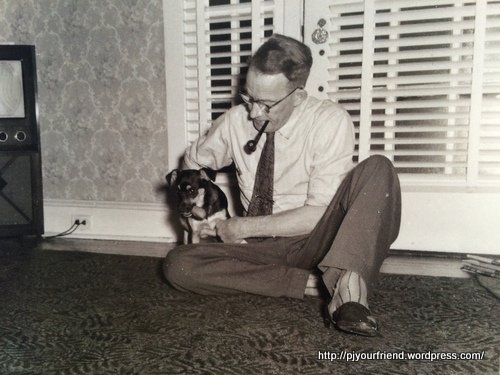 At one point in his career, Abbott’s Dairy sent Grandpop to Florida to give input on designing an ice cream shop for an extension of the company. Well, he had never been south of New Jersey before and fell in love with Florida!

When he retired, he decided he and Grammy would move there. She was heartbroken because their whole family was in the Philadelphia area – her two daughters (my aunts) with their husbands and children, along with my dad (their son) and our family. But Grandpop had made up his mind and off they went. I was in second grade.

Obviously we ourselves headed south a lot, at all times of the year, to visit. But Grammy only lived three years in Florida before her death. Grandpop’s health and mind suffered in later years but he was surrounded by his family as he eventually moved back “home”.

The memories are sweet and I will always remember his “fun” influence in my life.

A little fun fact: my dad and his cousin (both sons of the two brothers who left the coal-mining regions) each bought houses across the street from one another in Willow Grove. Dad’s cousin moved out of state when I was two years old so I did not remember them but years later, my second (or is it third) cousin (our mothers were pregnant at the same time) was doing family research and tracked us down.

I thank Janice for her research going all the way back to our roots in Ireland, which I’ve used here and for her new friendship. It’s really kind of amazing because she lives in South Carolina; our grandparents are buried in Pennsylvania; I live in Missouri!

I have fond vivid pictures of life in that row home in Philadelphia and my Grammy and Grandpop. I sure wish I had asked a lot of questions about them! But I was just a kid!!!

I’ll just have to hang on to my memories!

Thanks to Phyllis for sharing her grandfather’s immigrant tale with us today. On her blog PJ, Your Friend, Phyllis shares random thoughts and ideas and describes herself as a newish writer and storyteller. She is thankful for the words God gives her to share, and hopes readers enjoy, relate, and find meaning in her stories. You can also follow her on Facebook and Twitter.

If any other readers would like to share their family’s immigrant tales, please feel free to contact me with your submission. I love to hear stories of our ancestors and how their American dreams came to fruition.

Share my recipes and ramblings with the world
« Irish Cultural Artifacts
Chilblains, Hot Water Bottles And Other Chilly Memories Of An Irish Childhood »