Homemade chocolate pretzel spider webs are a fun treat for Halloween. These fun treats are ever so easy to make, and add a little fun to any Halloween get together.

They’re also a great edible craft for little ones to try with some supervision.

Who doesn’t like a spooky treat for this favorite time of year, when spiders spin their webs, ghosts roam the streets and spooky creatures can be found all around.

As you know, Irish people love Halloween. It’s a holiday that originated in Ireland, so it’s no wonder that we Irish embrace this holiday with gusto.

Why Are Spiders Associated With Halloween

Spiders seem to go hand in hand with Halloween. Webs and spiders adorn treats and feature in many Halloween decorations. But why do we associate spiders with Halloween?

The main reason why spiders evolved into a symbol of Halloween dates back to medieval times. They were closely associated with witches. Together with black cats, rats and bats, they accompanied witches on their medieval trails.

Today we link haunted houses, graveyards and tombs with Halloween, all dark places where spiders love to spin their webs.

In folklore, their webs are sometimes connected to the fairies. When dappled with rain drops they seem mystically enchanted.

Spiders featured in old Irish lore, with many superstitions associated with our eight legged friends. You’ll find many of these in the Irish Folklore School Collection on Dúchas.ie.

Let’s take a look at these old pishogues.

One curious Irish superstitious ritual involved putting spiders in a small little fabric bag and wearing it like a necklace. This was said to cure fever.

But whatever you do, don’t open the bag, because then you’re sure to have bad luck. I think the little purse would need to be sewn closed if you didn’t want to have spiders crawling around your neck.

Now, that’s an Irish tradition I definitely won’t be passing on to the next generation.

Another version of this superstion was associated with a cure for whooping cough. A live spider was caught and wrapped in muslin. This little packet was hung beside the mantlepiece.

The old wives’ tale claimed that when the spider died the cough would be cured. Another preventative treatment for whooping cough was to place a spider’s web around a child’s neck.

Long ago in Ireland the cure for yellow jaundice was not for the squeamish. The poor patient swallowed a lump of butter with a spider in it. The liver was said to be cured by the spider who would eat away any badness inside.

I don’t think I’ll be trying that one out either.

Spider webs were also claimed to have the power to help heal a cut. When someone suffered an abrasion or cut to their finger in years gone by, they would wrap it with a spider’s web until it healed.

The web was said to help clot blood and stop a wound from bleeding.

Spiders were also associated with wedding luck. If the bride see’s a lamb, a dove, or a spider as she travels to her wedding it was said to be a good omen. She would have good luck on her side for her marriage.

If a bride finds a spider in the folds of her wedding dress then it is said to be a sign that she will always have a prosperous life with her future husband.

A Spider Saves The Holy Family On Their Flight Into Egypt

Irish people do not like to kill spiders. It is deemed to be unlucky to kill a spider.

Their is an old belief that when Herod’s soldiers were looking for Jesus after his birth, the Holy Family was saved by a spider.

To avoid the soldiers, Mary, Joseph and the baby Jesus took shelter in a cave on their way to Egypt. A spider spun a web around the mouth of the cave so the soldiers could not see them taking refuge inside.

Spiders were therefore revered in Ireland and were seldom killed, except for medicinal purposes.

Plus to make matters worse, you’ll have seven years of bad luck into the bargain.

Now if you did happen to kill a spider, then it was said it would rain.

Also If a spider is observed sitting idly in its web, or hanging from it’s web, it is said to be a sign of rain. But if the spider starts to spin again, it is believed that the rain will soon pass by.

If a farmer’s fields are covered with spider webs, it was said to be a sign of good weather on its way.

Another old Irish superstition claims that if a spider crawls on your coat it is a sign that you’ll soon be the proud owner of a new coat.

“If you wish to live and thrive, let a spider run alive.”

And so this Halloween, to mark the importance of spider’s in old Irish customs and traditions, I’m sharing some fun pretzel spider webs.

Here’s how I make them….

These tasty treats are very easy to make.

All you need is:

Plus you’ll need a piping bag with a nozzle, or alternatively you can use a plastic bag with a snipped corner to pipe the chocolate.

Cut some parchment paper into squares that are wider than two of the pretzel sticks that you are using.

Place some pretzel sticks in a pointed spiral on the paper. They should resemble the spokes of a bicycle.

These pretzel sticks will form the spines of your spider webs.

Melt the chocolate in the microwave, in 20 second bursts.

I like to melt chocolate in a bowl over a saucepan of hot water. I then transfer the melted chocolate to a piping bag or a plastic bag that I snip in the corner.

Pipe spirals of melted chocolate around the pretzel sticks.

Separate each layer of the web by about a ¼ inch.

Work from the inside out as you add each web layer.

Allow the chocolate to harden completely before moving the webs.

This usually takes 50 to 60 minutes depending on the temperature of your room.

You can place the parchment paper squares on a baking tray before piping the chocolate. Transfer it to the fridge to help cool and harden the chocolate once you’ve piped the chocolate webs.

I like to make white chocolate and milk chocolate webs.

Feel free to use dark chocolate if you prefer.

Here’s a printable recipe if you wish to add this fun activity to your kitchen files. 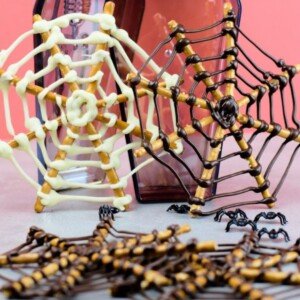 Wishing everyone a very happy Halloween. I hope you enjoyed this little round up of Irish spider superstitions and lore.

Here are some other posts to help you celebrate Halloween this year.

I hope you enjoy a holiday full of spooktacular fun.