Barmbrack is a fruit bread associated with Halloween in Ireland. However, nowadays it’s available all year round in bakeries and grocery stores throughout Ireland. But at Halloween special trinkets are baked into the brack for a little Halloween fun.

When you search for a barmbrack recipe online you often find a tea brack recipe instead of an actual barmbrack.

There is a little confusion over what exactly makes a brack, and as non Irish people are attempting to have their recipes feature on the top Google searches, the history and origins of barmbrack are getting very fuddled.

Today, I’ll try to clear up the differences between tea brack and barm brack, plus we’ll take a look at why this bread is associated with Halloween.

Have you every wondered what does barmbrack mean in English?

Why is the loaf of fruit bread called barmbrack?

Brack is a fruit speckled cake or bread.

The term báirín breac is used in Irish as the name for a Halloween brack.

That explains the brack portion of the name barmbrack. Read on to learn all about barm.

Differences Between Tea Brack and Barmbrack

There are two different types of brack made in Ireland.

The first is a tea brack, which involves soaking dried fruit in black tea overnight, before baking it into a butter free cake.

Barmbrack is different in that it is made using strong flour and yeast. There is far less dried fruit used in a barm brack compared to a tea brack.

Now barm is the yeasty froth that forms on the top of malty beers. It is also an archaic word for yeast.

In her book Irish Traditional Cooking, Darina Allen explains that a tin of barm mixed with flour, was kept on a shelf beside the fire in most rural Irish kitchens. It was like a sourdough starter, that was fed a little flour from time to time, and used to make yeast breads.

In times gone by, yeast was not sold in perfectly measured packets like we find today. Barm would be obtained from a brewry to make a bread starter kit. Barm was probably shared whenever someone wished to start their own tin of bread leavening agent to keep in their kitchen.

Since the term barm refers to a yeast leavening agent, a traditional barmbrack should be made with yeast.

On the internet, you’ll find tea bracks to beat the band, with bakers mistakenly calling them barmbracks. They are bracks for sure, but definitely not a barmbrack.

Today, after my Halloween rant,  I’m sharing my own barmbrack recipe, which is made with yeast.

I hope you’ll like it, but before I share the recipe, let’s take a quick look at the trinkets found in a barmbrack.

Barmbrack was eaten by the Irish at Halloween as part of their fortune telling rituals for Samhain (pronounced sow-in). This Celtic Festival marked the beginning of the New Year for the Celts, and they loved to determine if good fortune awaited them.

In fact, it is only in recent years that the Irish started to celebrate the new year on January 1st.

Barmbrack trinkets were a way to have a little fortune telling fun for the Celtic new year.

There are variations on the trinkets used in different regions of the country, but a ring was baked into the brack no matter where you were in Ireland.

Which trinkets are baked into a barm brack?

Whoever found the ring in their brack was said to be next in line for marriage (if the person happened to be still single). If you were married I believe the ring meant your would have a trouble free time for the coming year and good fortune awaited you.

A nut or pea found in your slice of brack was said to signify you would remain a spinster or bachelor for the year. In some parts of Ireland a thimble was used to signify spinsterhood.

A holy medal or cross was the sign you would become a priest or nun.

A small stick signified a dispute was on the way.

A coin signified you would prosper that year and have plenty of wealth.

A piece of cloth foretold a year of want ahead.

If you know of other trinkets used, do let us know in the comment section. And don’t forget to tell us what part of Ireland these traditions hail from.

Baking trinkets into bracks is not as common anymore, as we have all become very aware of health and safety regulations. I recommend wrapping the trinkets in a little parchment paper parcel before baking into the dough.

And do be careful when eating a brack with hard trinkets – nobody wants to suffer a broken tooth for Halloween.

Here’s a quick list of the ingredients I use. You’ll find exact amounts in the printable recipe at the end of this post.

This is what barmbrack is made of.

This recipe calls for mixed spice, which is a traditional blend of spices used in baking in Ireland and the United Kingdom.

I have a recipe for homemade mixed spice, or alternatively you can use pumpkin pie spice. The flavor profile will be slightly different, but close enough.

Mixed spice already contains cinnamon, ground cloves and nutmeg, so I do not add any additional spices.

If you like a bolder flavor in your barmbrack you can soak the raisins in a tablespoon or two of whiskey. Let them sit in the spirits for an hour or two before adding them to the dough.

The leavening agent for this cake is yeast, so there’s no baking soda or baking powder found in the ingredient list. This is not an Irish soda bread, which is yeast free.

Raisins, currants, cherries and mixed peel are the most commonly used dried fruits for this traditional loaf. I use additional raisins rather than currants when baking barmbrack in America. Currants are not widely available in grocery stores in the US.

You can experiment with other dried fruits such as cranberries, apricots, and blueberries. However, for a truly traditional barmbrack I would stick to the usual dried fruits.

Here you’ll find step-by-step photographic instructions for making an Irish Barmbrack using yeast. The printable recipe is at the bottom of the post.

Sift the flour, mixed spice, cinnamon and salt into a large mixing bowl and stir it all together with a wooden spoon.

Break the butter into pieces and add it to the sifted flour.

Rub the butter into the flour mixture.

You can use a pastry cutter for this job, but I prefer to use my hands. I love doing it the old fashioned way.

Add the sugar and mix the dry ingredients together.

Prepare the yeast in a separate bowl or pitcher. Mix the packet of yeast with 1 tablespoon of tepid milk and 1 teaspoon of sugar.

Let it stand for about 5 minutes. The yeast will become creamy and frothy when it’s ready.

Add the yeast mixture, the additional tepid milk and the beaten egg to the flour.

Knead for about 5 minutes by hand or using the dough hook of an electric mixer.

Add the raisins, golden raisins, candied peel and cherries to the dough and mix it through.

Cover the bowl of dough and leave it in a warm place for 1 hour. The dough should double in size.

Knock the dough back and remove it  from the bowl.

Turn it out onto a floured surface.

Cover the ring in parchment paper, and hide the packet in the dough.

If you want to use a pea and a stick or any other traditional brack additions, do cover them in paper before burying them in the dough.

Place the dough in a large 10-inch round baking tin.

A 9-inch round tin will also work, but the brack will be higher. It takes longer to cook in the smaller tin, and you definitely would need to tent the loaf with aluminum foil to prevent the top burning before the inside of the brack is cooked through.

Cover the loaf in the baking tin and allow it to rise again for 45 minutes.

While the bread is rising, pre-heat the oven to 350 degrees Fahrenheit or 180 degrees Celsius.

The loaf will have puffed up to the top of the tin.

When the loaf has finished rising, bake it in the oven for about 1 hour, or until fully cooked.

About 10 minutes before the brack has finished cooking, make an egg glaze.

Add one egg yolk, a tablespoon of milk and a teaspoon of sugar to a bowl and whisk them together.

Remove the loaf from the oven and glaze the top with the egg wash using a baking brush.

Return the brack to the oven for 2 to 3 minutes to finish cooking the glaze. Nobody wants raw egg on top of their bread.

Cool in the tin for just a few minutes. Then turn it out onto a wire rack to cool.

When cooled, cut into thick slices and slather it in butter or jam or whatever you like on your fruit bread.

And that’s how you make a traditonal Irish barmbrack.

It’s a lot more complicated than a tea brack, but trust me it’s delicious.

I love to eat barmbrack when it is still slightly warm and I add lashings of Irish butter.

It’s also delcious toasted, especailly if your brack is a day or two old.

Here’s the printable recipe, if you would like to add this Irish traditional bread to your recipe files. 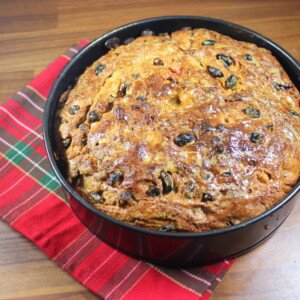 Barmbrack or Báirín Breac – A Traditional Fruity Bread From Ireland

Wishing everyone a very happy Halloween, and happy brack baking as we continue this ever so Irish Halloween tradition.