Abbeystrewry Graveyard in Skibbereen is a beautiful, yet poignant memorial to the victims of the Great Irish Famine of 1845 to 1850.

Over 9000 men, women and children were laid to rest here, in an unmarked, mass grave. 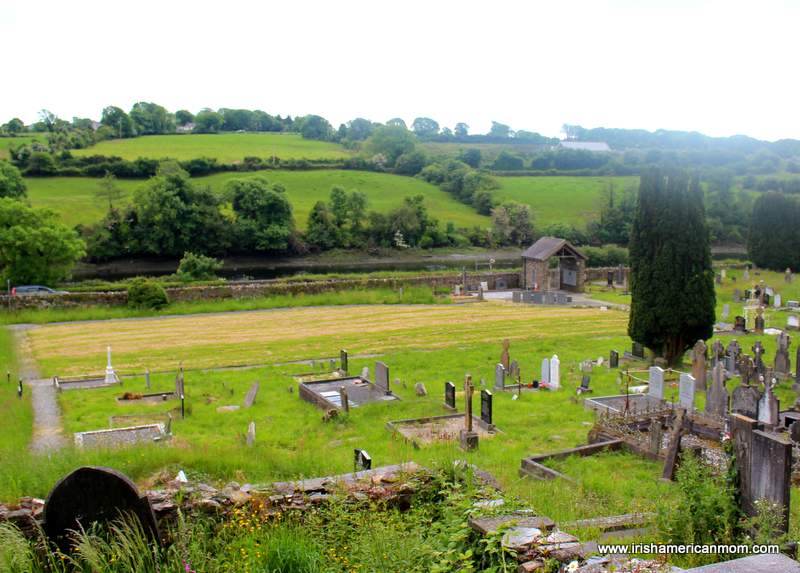 During the Famine the people of Skibbereen were decimated by the loss of the potato crop. Many lost their lives and many left Ireland forever, never to return.

For anyone wishing to pay their respects to those who perished in the Irish Famine, this cemetery in County Cork is well worth a visit.

In this graveyard you'll observe tombstones from many eras, but it is the large green flat area of grass beside the front wall of the graveyard, that was used as a mass grave for some of the Famine victims of Skibbereen and its surrounding areas. 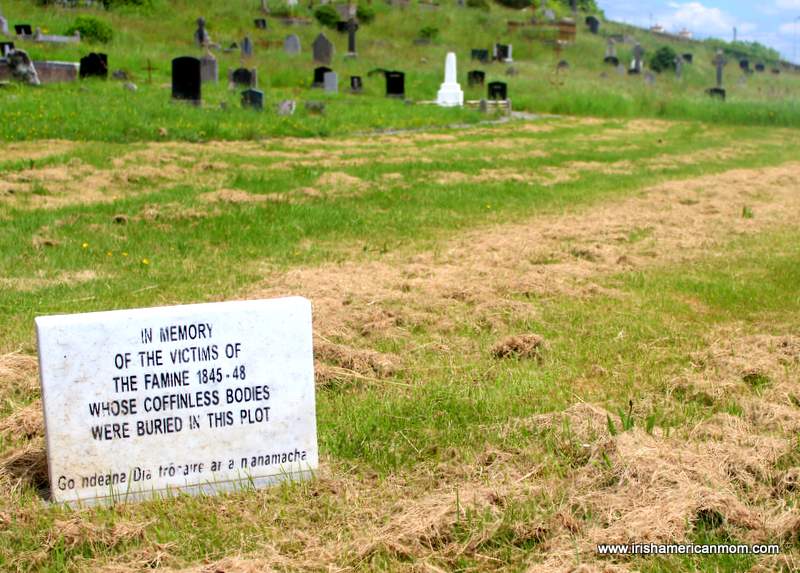 This green plot is the resting place of over 9000 victims of starvation, fever, and disease.

It is an emotional place.

Situated beside the busy N71 roadway, the walls of the cemetery create a quiet and peaceful space, where visitors can pause, and bow their heads in remembrance of Ireland's lost generations.

This is an evocative and spiritual place. The tragedy and horror of Ireland's famine history is evoked by touching and thoughtful memorial stones.

The words engraved on these five headstones, which stand beside the mass unmarked grave, are very moving.

Five stone stools, erected opposite each memorial stone, allow visitors to stop a while, to sit and absorb the enormity of what they are witnessing. 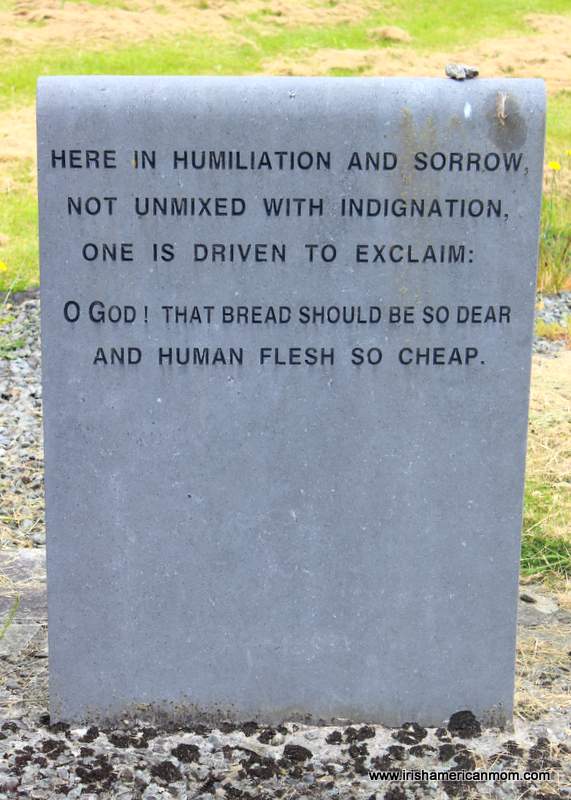 This is a quiet and heartrending burial site - a sobering experience for those who pause to take in the understated dignity of the memorial. 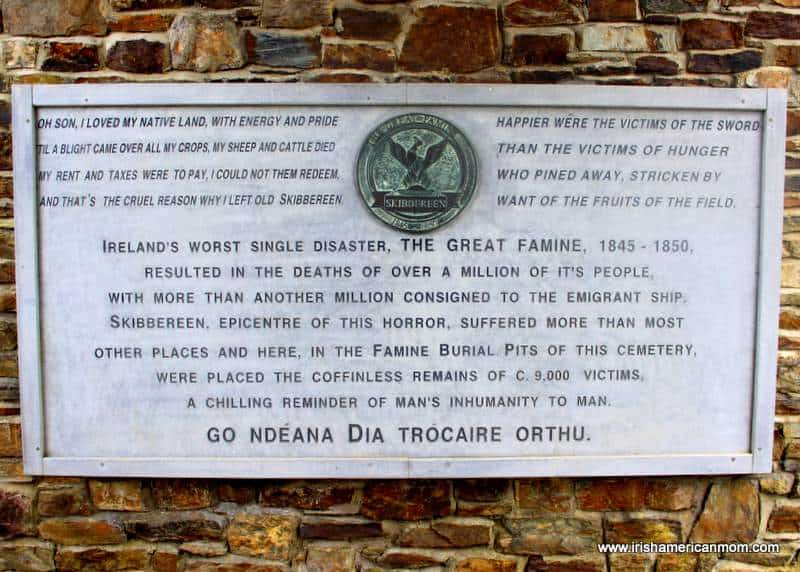 The details are harrowing in the extreme. Skibbereen was the epicentre of the disaster known at the Great Hunger or the Great Irish Famine.

The Work House In Skibbereen:

Many of the victims buried here died in the Skibbereen work house. 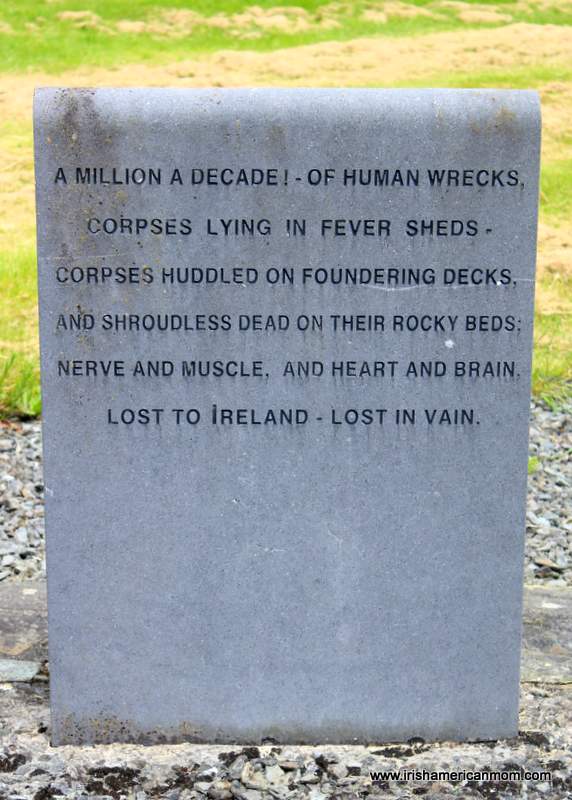 At the height of the disaster over 60 people a day were dying from typhus and yellow fever at the Skibbereen work house.

Many were laid to rest in this unmarked, mass grave in the Abbey graveyard.

Through the ages the Irish have been renowned for their customs, traditions and attention to detail when burying their dead. 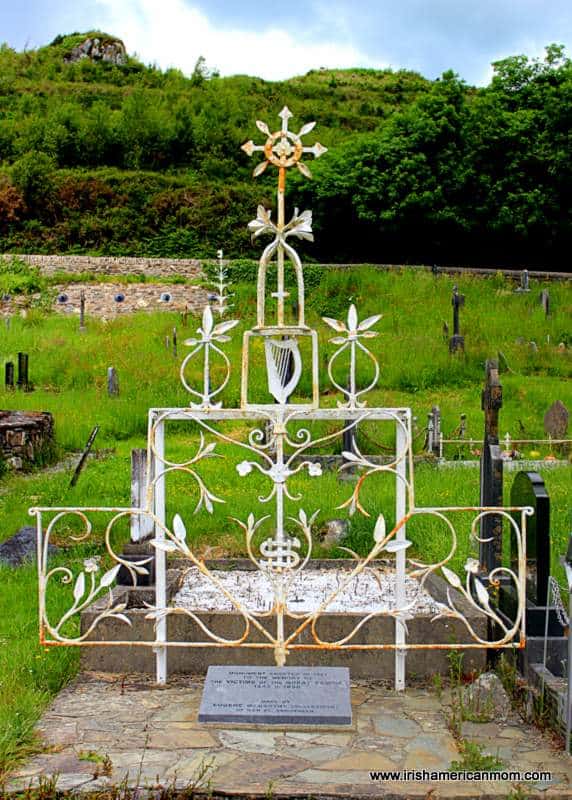 To be buried in a coffin was a very important sign of respect in 19th-century Ireland.

No coffins were afforded the poor, destitute people interred in this large burial pit.

No rosary beads were entwined between their fingers.

No care and attention given to their emaciated bodies before burial. 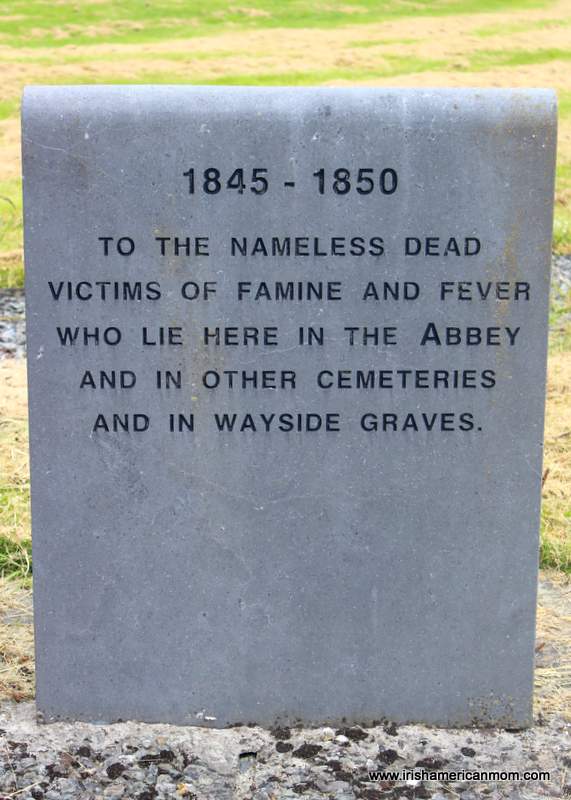 A correspondent for The Examiner newspaper at the time wrote ...

"The dead are enclosed in rude boards, having neither the appearance nor shape of a coffin and are committed to their silent resting place in the night time, when no eye can rest curiously on the rude contrivance, or observe the absence of friends and mourners, and the want of all that ceremony so grateful to the pride and consolatory to the feelings of the Irish peasant." 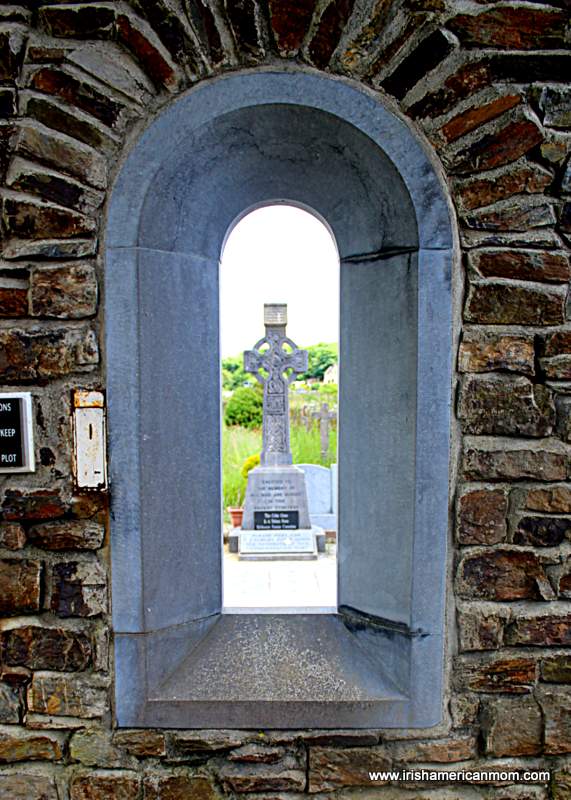 Before the blight struck in 1845, potatoes were grown in abundance on the farms around Skibbereen and were the sole subsistence crop for about one third of the population in this area.

Impoverished, hungry people from the rural areas and remote peninsulas of West Cork began pouring into Irish towns in search of help during the bleak winter of 1847.

Skibbereeen and its work house were overwhelmed by the hungry, sick and dying, seeking aid. This area of Ireland was arguably the hardest hit throughout the whole country. 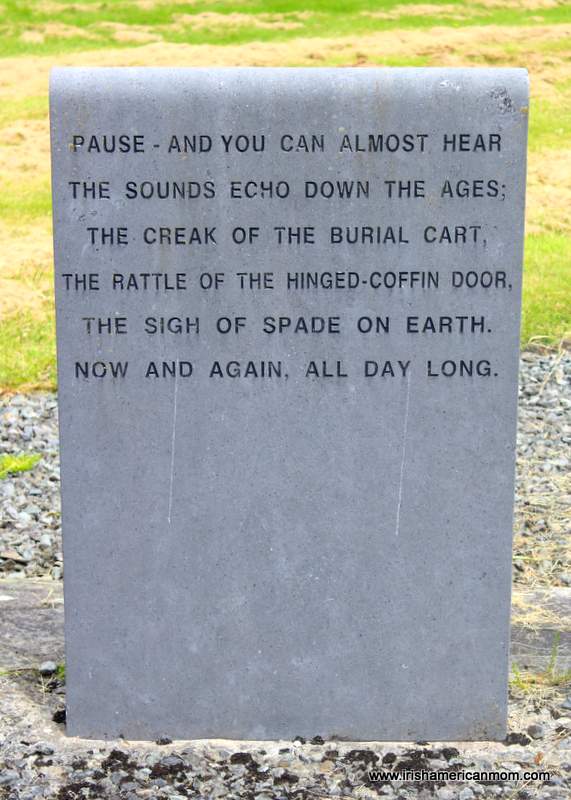 While the Irish people starved and died from fever and dysentery, the English government continued to ship boat loads of grain from Ireland, food that could have been used to sustain the hungry.

These burial pits are bitter evidence of "man's inhumanity to man". 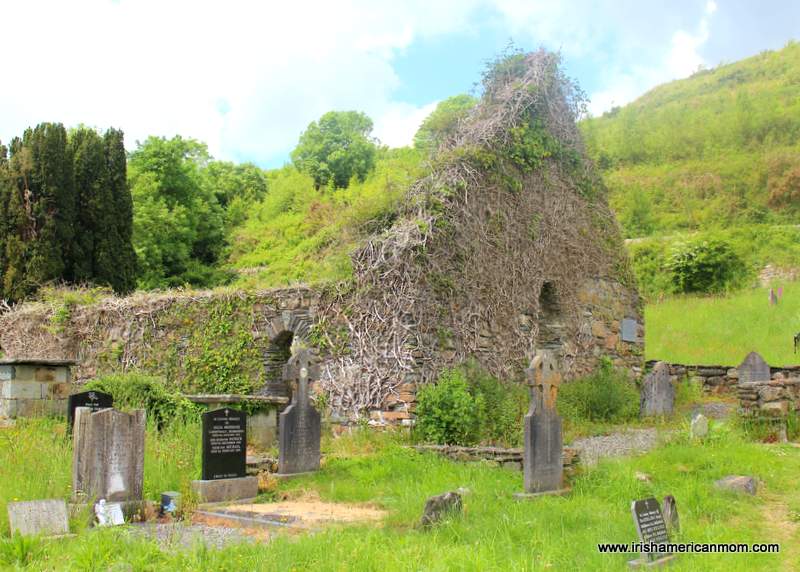 Abbeystrewry cemetery became one of several Irish 'famine pits' or open graves in which the corpses of the dead were heaped and eventually covered over with a thin layer of clay.

It is estimated that somewhere between 8,000 and 10,000 souls were laid to rest in the Abbeystrewry Famine Pits.

It's a very sad and moving experience to sit beside this burial plot and contemplate all the lives lost. 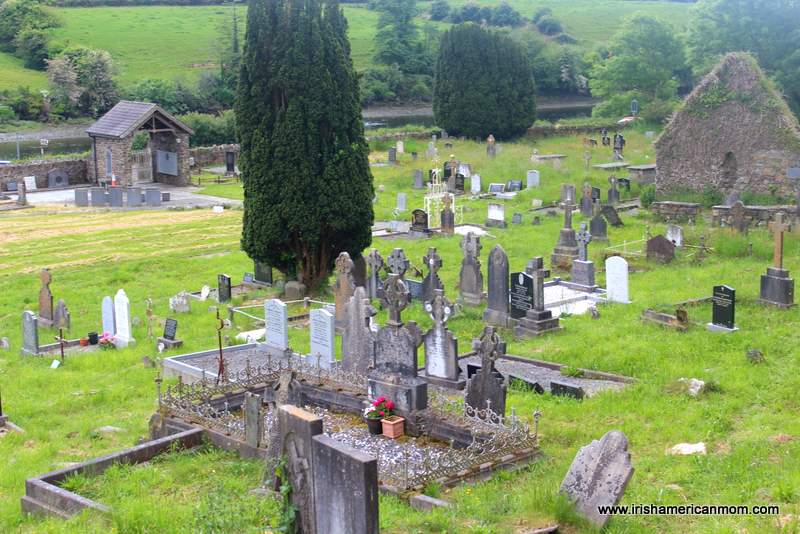 The stone monuments erected here are a heart breaking reminder of this great tragedy, that shaped Ireland and America.

"Here in humiliation and sorrow

not unmixed with indignation,

One is driven to exclaim,

“O God, that bread should be so dear

and human flesh so cheap." 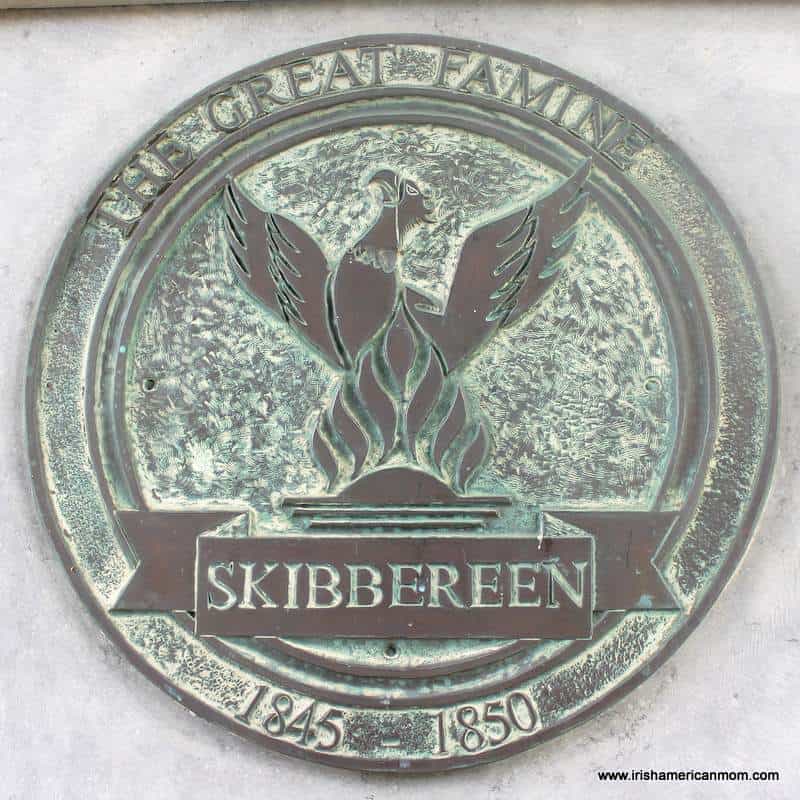 If you travel here by car, it's good to know there is limited parking on a small narrow road above the graveyard, which is far better than trying to park on the busy N71 roadway.

And so, if you find yourself traveling along the highways and byways of West Cork this summer, do stop by this graveyard in Skibbereen for just fifteen minutes or so. 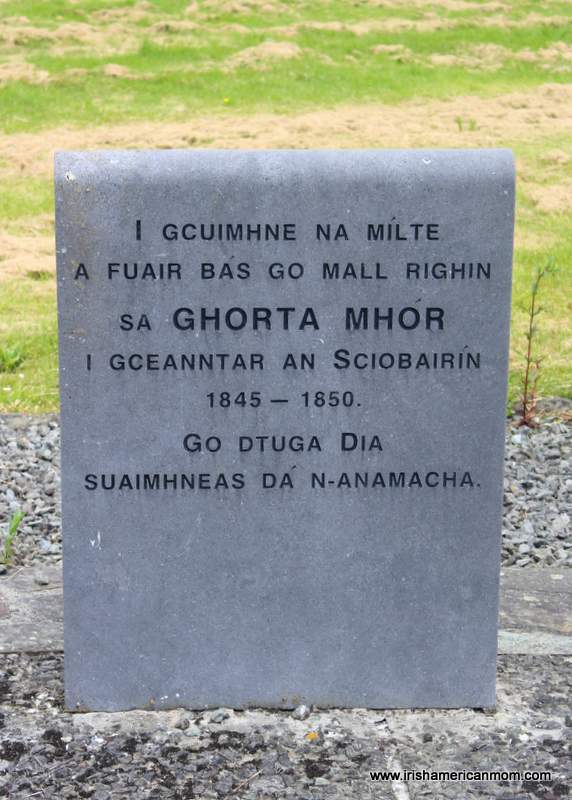 Contemplate for a moment the horror of Ireland's Famine and remember the thousands of souls laid to rest in this poignant and sad place.

May they rest in peace, in what is now a beautiful and peaceful place.

Here are some previous posts on the subject of the Great Irish Famine which you might find interesting.