The Celtic Cross is close to the heart of our next guest writer. Today I am pleased to share a guest post from SS Hampton, Sr. a full blooded Choctaw Indian from Oklahoma who tells us of us admiration for the symbol of the Celtic Cross.

While researching the links between his tribe and the Irish he came across my blog and a post I wrote about the Choctaw Nation’s link to the people of Ireland at the time of the Great Hunger.

He wrote this guest post about his heartfelt connection to the Celtic Cross, a well loved symbol of Ireland. I am honored to share his story with you today, to celebrate the connection so many people all over the world feel with Ireland. 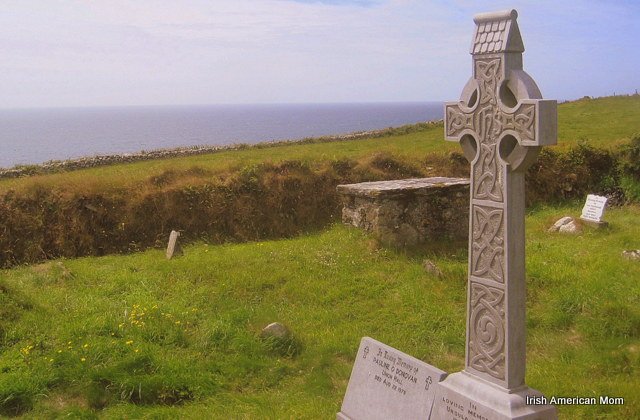 I am a Choctaw Indian from Oklahoma. Aside from the historical connection between my tribe and the Irish as a result of the 19th century famine known as “The Great Hunger,” I have always appreciated many things Irish, to include the music, dancing, and mythology. A friend and I even went to see Riverdance when they performed in Denver, Colorado many years ago.

Among the many things Irish that I appreciate is the Celtic Cross. I have no explanation why, I just do.

The Celtic Cross, carved from stone or wood, consists of a cross superimposed over a ring, and both are often decorated with Celtic-styled artwork. According to legend the cross was introduced by Saint Patrick during his conversion of the Irish, though Saint Declan is sometimes credited with its creation (he “preceded Saint Patrick in bringing Christianity to Ireland” and founded Ardmore Monastery).

There are various theories regarding the origin of the cross design, such as the supremacy of the Christian Church over paganism as symbolized by the ring (sun worship). Regardless of purpose the cross is beautiful in design and stylized artwork.

As my biography mentions, I serve in the Army National Guard (my initial enlistment took place when I was 50 years old). I deployed to Iraq with a SECFOR battalion, security force, in 2006-2007; we were stationed at a convoy support center in northern Kuwait a mile south of the Iraqi border.

Every day our Soldiers went north escorting supply convoys to various destinations throughout Iraq. Those first 30 days were rough—the battalion we were replacing lost a Soldier to an IED. The first two weeks on our own there were more casualties from IEDs, including the first death in our battalion.

Such a beginning was enough to make anyone cautious.

During our deployment I was a Human Resources NCO in the company HQ, so I didn’t have to go north. I went north three times. I had served with these Soldiers for years—how could I sit in camp in safety every day without going north, without sharing the danger my comrades faced? Fortunately, when I went north nothing happened.

The Celtic Cross As A Symbol of Protection

Was I lucky? Was it simply that it wasn’t my time to experience the danger of combat? I don’t know.

After I volunteered for the upcoming SECFOR mission I had an urge to hunt for something special. Not specifically a good luck charm but something that would give me a feeling of comfort…and maybe safety and strength. I immediately knew when I found what I was looking for—a Celtic Cross.

Every Soldier is issued a set of rectangular metal “dog tags” that contain important information such as blood type and religious preference; they are attached to a thin chain worn around the neck. I put the Celtic Cross on the chain with my dog tags. I wore these through pre-deployment training, and when we boarded the aircraft to deploy overseas.

I removed the dog tags and Celtic Cross upon our return to the States and arrival at the demobilization center.

Because I still serve in the Guard, though I may soon retire, I keep uniforms and personal equipment close at hand, ready for immediate packing. My dog tags and Celtic Cross are close by—they are the first things I will pick up if I ever receive orders again.

So, although I enjoy Saint Patrick’s Day as celebrated, and I enjoy many things Irish, there is something wonderfully Irish that I will always appreciate above all: the Celtic Cross.

You know, I really hope to one day visit Ireland before I die. Maybe I can place my hand upon a real stone-carved Celtic Cross. 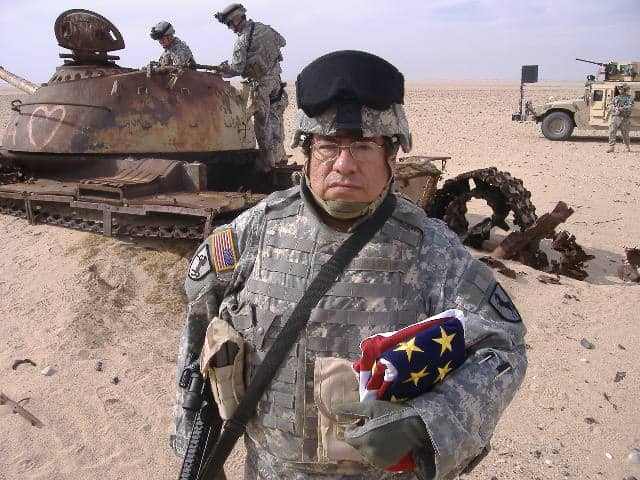 SS Hampton, Sr. is a full-blood Choctaw of the Choctaw Nation of Oklahoma, a divorced grandfather to 13 wonderful grandchildren, a published photographer and photojournalist, and a member of the Military Writers Society of America.

He is a serving member of the Army National Guard with the rank of staff sergeant. He served in the active duty Army (1974-1985), the Army Individual Ready Reserve (1985-1995) (mobilized for the Persian Gulf War), and enlisted in the Army National Guard in October 2004; he was mobilized for Federal active duty for almost three years after his enlistment. He is a veteran of Operations Noble Eagle (2004-2006) and Iraqi Freedom (2006-2007).

His writings have appeared as stand-alone stories and in anthologies from Dark Opus Press, Edge Science Fiction & Fantasy, Melange Books, Musa Publishing, MuseItUp Publishing, Ravenous Romance, and as stand-alone stories in Horror Bound Magazine, Ruthie’s Club, Lucrezia Magazine, The Harrow, and River Walk Journal, among others. He is an aspiring painter and is studying for a degree in photography and anthropology—hopefully to someday work in underwater archaeology.

After 12 years of brown desert in the Southwest and overseas, he misses the Rocky Mountains, yellow aspens in the fall, running rivers, and a warm fireplace during snowy winters. As of December 2011, in Las Vegas, Nevada, Hampton officially became a homeless Iraq War veteran.