×
Home » Lessons for Tourists » Symbols of Ireland » The Irish Harp: A Tale of Ireland's National Emblem

Here's a fun question for you. What do the Irish presidential seal and a bottle of Guinness have in common?

The answer: they both use the Irish harp as a symbol!

This gorgeous instrument has been a national emblem for years, finding its way into official documents, Irish passports, and even on the bodies of some Irish folk, as tattoos. 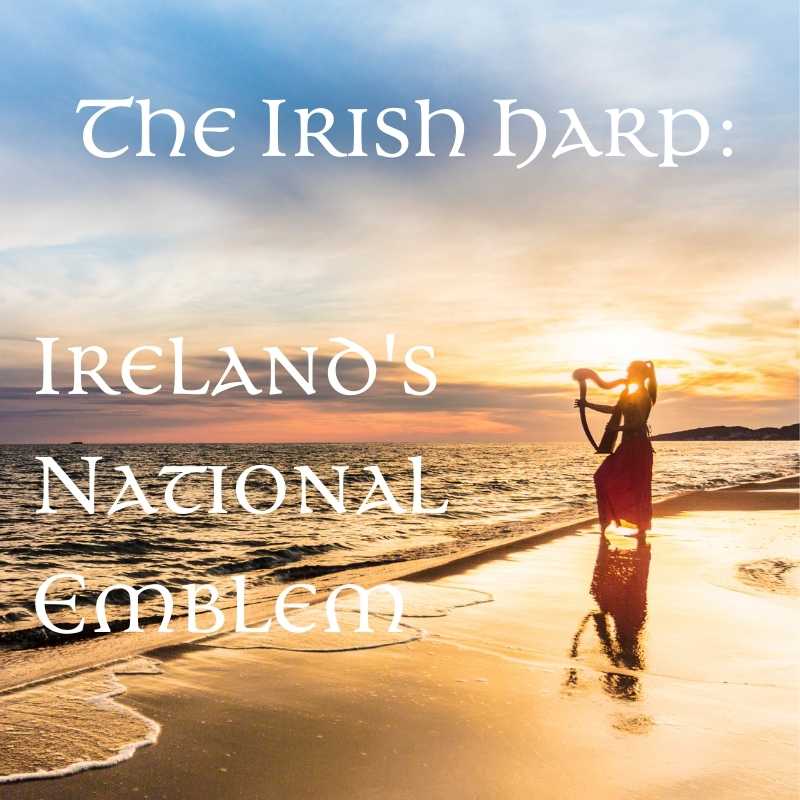 Today let's take a look at what makes this harp so special, and how it grew to become such a symbol of Ireland, recognized as an influence in ancient Irish history, as well as modern culture.

The Origins and History of the Irish Harp:

A traditional Irish harp is defined by its enormous soundbox, its sturdy, but heavy neck, and a fore pillar that is deeply curved.

From ancient times, up until the early seventeenth century, harpists enjoyed a high status in Ireland, regarded for their technique and skill.

The instrument itself was associated with the Irish ruling class and the Irish aristocracy. This perhaps owes to the time in the 11th century, when King Brian Boru was highly regarded for his fine skills on the harp. 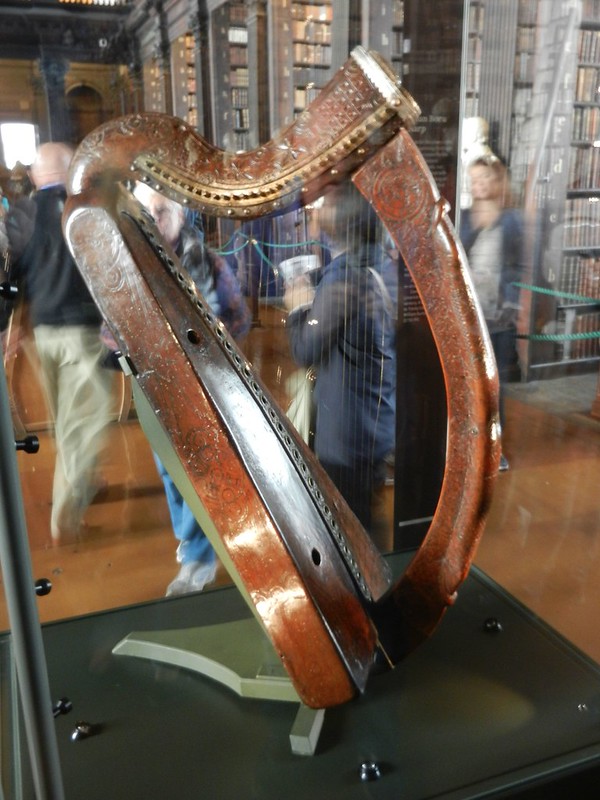 This perception can be traced back to the later years of the 12th century, where Giraldus Cambrensis and Prince John took a trip to the country and identified the ability to play the harp as the only redeeming trait of an uncivilized race.

This statement was never forgotten and brought up as definitive evidence for a highly skilled and civilized Gaelic society.

However, after the 17th century, the admiration surrounding the harp seemed to die down, making it difficult for harpers to earn off the skills that were for so long revered.

Later, during the 19th century, the harpers took to traveling from house to house, in an attempt to earn a living.

Instrument of the Tuath Dé Danann:

Reference to the earliest Irish harp music is found in stories of the Tuatha Dé Danann, the fairy settlers of Ireland in ancient times.

When Boand, the wife of the Dagda Mór, an ancient Irish deity, was giving birth a harper played to help ease her labor.

On the birth of her first son, the harp groaned with crying music.

At the birth of her second son it reverberated with laughing music.

And when her third son entered the world the harp music was soft and sweet with the tones of healing music.

These three strains of music formed the core and heart of Irish music, and can still be heard today.

Irish legend tells of how a fairy musician of the Tuatha De Danann came to the home of the High King at Tara every year at Samhain or Halloween.

For 23 years straight he played timpán (an early version of the harp) and all who heard him were lulled to sleep. Unfortunately as the King and all his warriors and dignitaries slept, the wily fairy musician blew thee blasts of fire from his nostrils, destroying the fort on top of the hill. 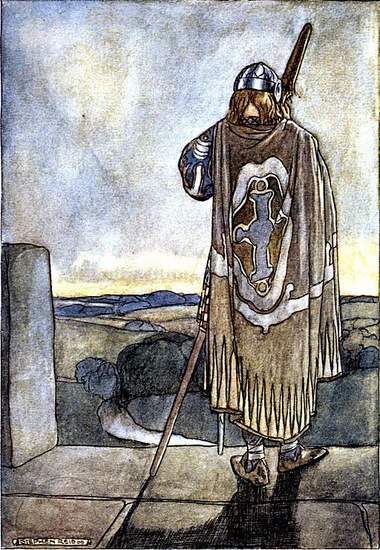 Finn McCool hears the far off sounds of the fairy harp.

At ten years of age, Finn MacCool used a magic shield to protect him from the magical lilting music of the harp and resisted the urge to sleep.

He then used a mystical spear to slay the fire man of the Tuatha Dé Danann.

The Irish harp found its way into the Irish coinage under the rule of Henry VIII, and later into the coat of arms under the reign of James I. James I was also the first to establish it as the official emblem of Ireland in 1603.

During the 18th century, it was adopted by various other political powers, each featuring the harp in different forms. The Protestant Ascendancy adopted a winged Irish Harp as its symbol, while the Society of United Irishmen adopted an uncrowned harp as theirs. 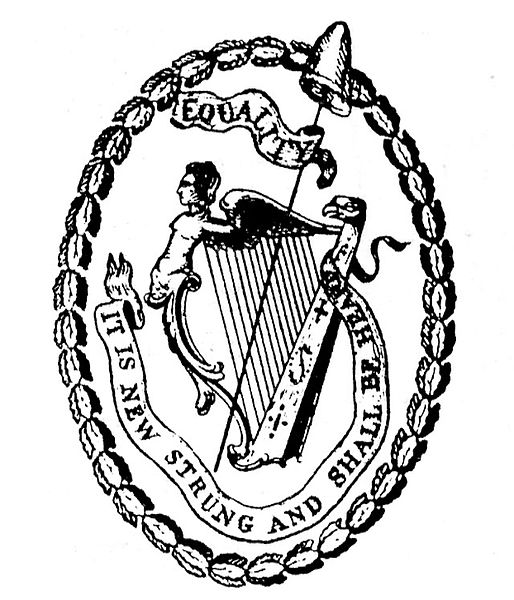 Seal of the United Irishmen from 1791

During the Easter rising, various versions of the flag were waved as a symbol of rebellion, most of which featured a bold, golden harp in the center.

This political significance triggered a rise in the production of the harp during that era.

Amidst the growth of production, also came the development of a new kind of harp - the portable Irish harp, inspired by the European harp.

The Harp and Irish Literature:

The harp also evolved into a symbol for social justice in Irish literature. You'll find this particularly in the works of Irish writers like Sydney Owenson and Thomas Moore.

Many Irish children, just like me, learned and sang  the lovely ballad, "The Harp That Once Through Tara's Halls," by Thomas Moore.

Written in 1807, Moore uses these lyrics to remember the ancient castle of the High Kings of Ireland that once stood on the Hill of Tara. The structure is no more. He mourns for the lost Irish chieftains and ladies who once walked through Tara's halls and were entertained by ancient harp music.

"The harp that once through Tara's halls
the soul of music shed
now hangs as mute on Tara's walls
as if the soul were fled..."

In Owenson's work, Patriotic Sketches of Ireland, there was the likening of the cries of the poor to the sound of the harp.

In Moore's The Minstrel Boy, the harp was used to represent the subjugation of a nation, and the collapse of the Gaelic civilization.

"The minstrel boy to the war is gone,
In the ranks of death ye may find him
His father's sword he hath girded on,
With his wild harp slung along behind him;
Land of Song, the lays of the warrior bard,
May some day sound for thee,
But his harp belongs to the brave and free
And shall never sound in slavery."

This song is often played on bagpipes by many Irish American groups. 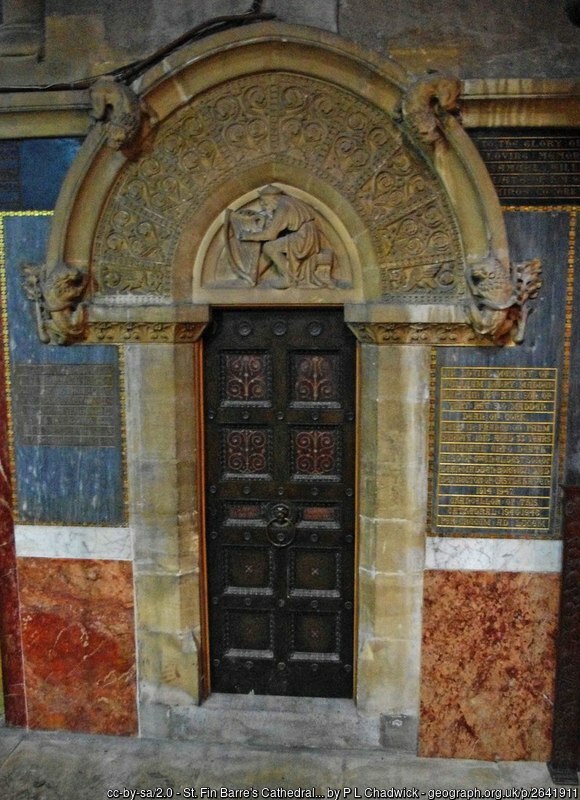 Carving of an Irish harpist inside Saint David's door, in Saint Fin Barre's Cathedral in Cork.

In 15th and 16th century Ireland, harpists played an important role in Irish society. They were highly respected for their skill, and music was greatly appreciated by Gaelic chieftains and their subjects.

Harpers or harpists were employed to entertain the people at important occasions such as weddings, banquets, and victory celebrations. Some members of the Irish nobility even hired their own musicians. In some Irish castles, harpists were permanent and highly respected residents.

The Gaelic nobility, before the infamous conquest of Ireland by Henry VIII and his daughter Elizabeth I, were generous supporters of the arts and music.

The most famous of all Irish harpists was Turlough O'Carolan. He is known as Ireland's greatest national composer.

Born in 1670, he was blinded at the age of 18 due to complications of smallpox. His lack of sight did not deter him, and he became a proficient harpist, traveling Ireland to share his performances and compositions all over the country.

Over 200 traditional Irish tunes and songs are attributed to O'Carolan. Many were not committed to paper while he was alive, but during the 18th and 19th centuries many of his works were collected and published. His melodies are still performed to this very day.

Traditional Irish groups and musicians often record O'Carolan pieces including The Chieftains, Planxty and the Dubliners.

Interesting Facts About the Irish Harp:

Now you've got a gist of the evolution of the Irish harp in ancient and medieval culture. Let's now move on to some fun and interesting facts about the Irish harp that you may not know.

Ireland is the only country that uses a musical instrument as its national symbol. You can find this symbol on the Irish Presidential seal, official documents in Ireland, Irish passports, Irish driving licenses, the constitution of Ireland, government letterheads, and Irish coins (Euros). 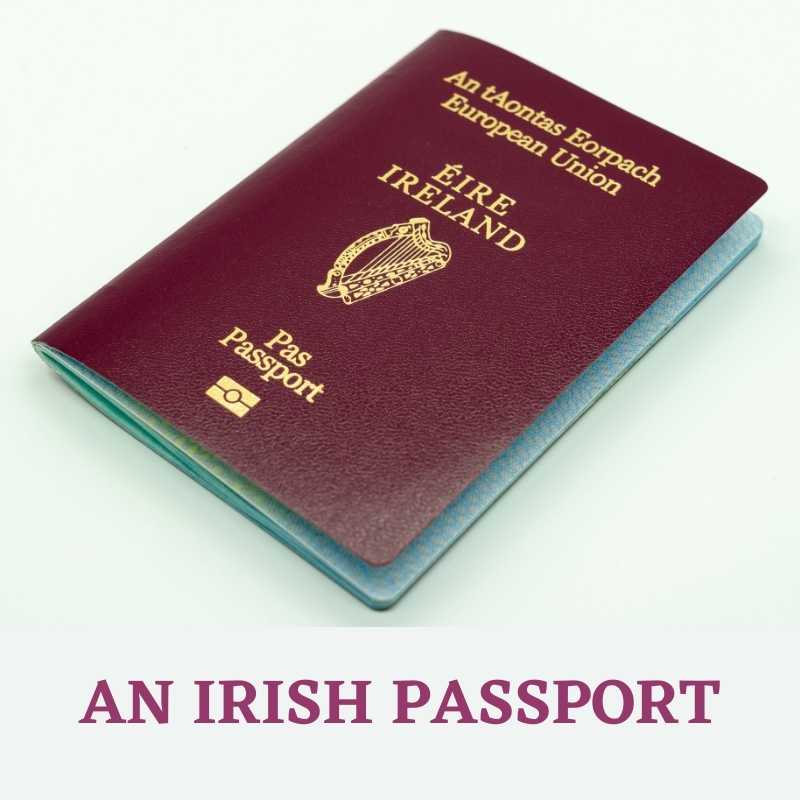 Additionally, it is also used as a symbol for various political and national organizations in Ireland.

Most famously, in 1642, Owen Roe O'Neill flew a very different Irish flag than the one you see today.

This flag was a deep green one, that had - you guessed it - an Irish harp in the center!

In some parts of Ireland, it is believed that the harp strings represent the arms of the king. Perhaps this indicates the king's power, or the king's ability to reach out to the folks of Ireland and address their dissatisfaction.

Modern Ireland and the Harp:

Over the years we've seen that the harp has represented various things in different eras. The meaning itself has evolved to encompass the spirit of the Irish civilization from ancient times to today.

Today, if you wander through Ireland, you can spot this symbol everywhere. On bars, cafes, museums, and of course, that good 'ol bottle of Irish stout we mentioned at the beginning. 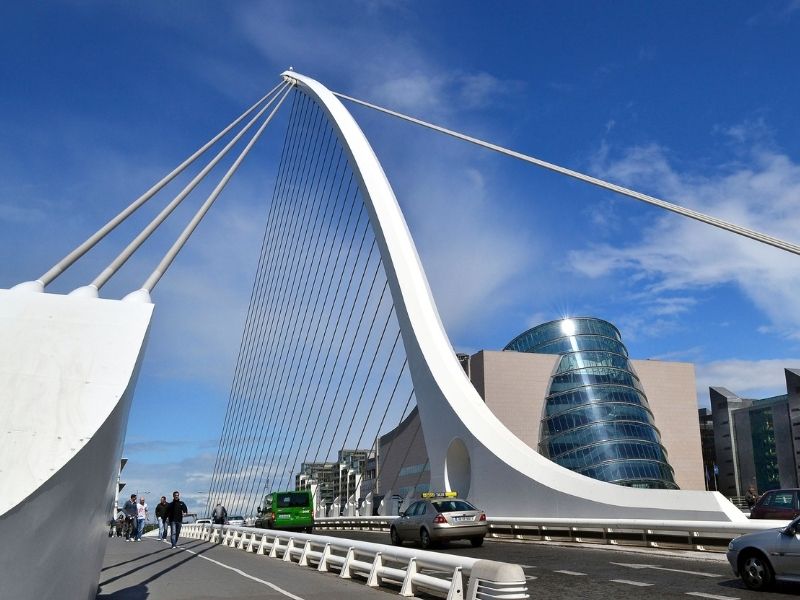 There are several societies in Ireland dedicated solely to the preservation of this Irish tradition, helping foster harp skills and techniques in the young people of Ireland.

A True Symbol of Irish Culture:

The Irish harp has long been, and will always be representative of Irish culture along with the shamrock. The next time you grab yourself that iconic bottle of Guinness, we hope you'll remember the roots of that symbol!

Want to learn more about Ireland and its wonderful culture? Here's a guide that'll walk you through all things Irish. Be sure to check it out here 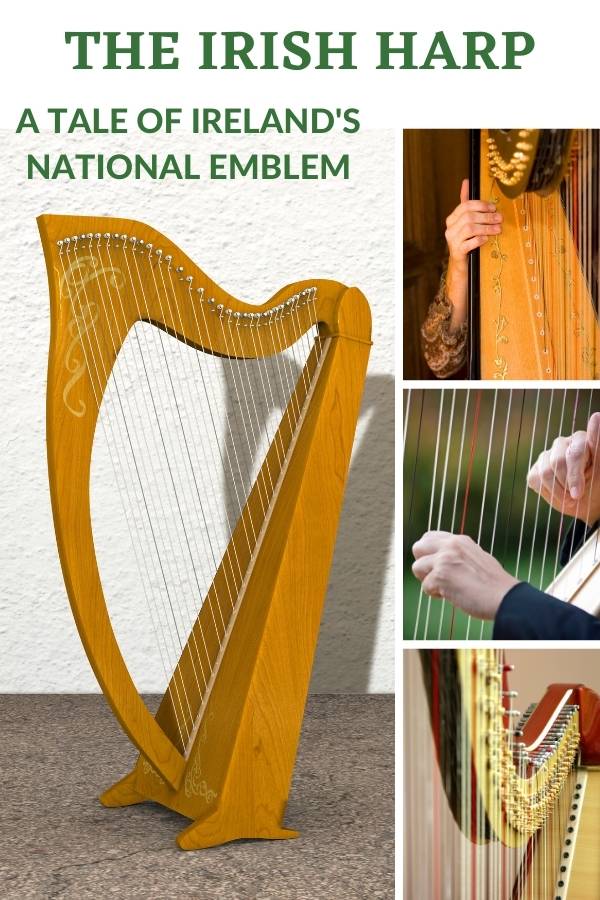 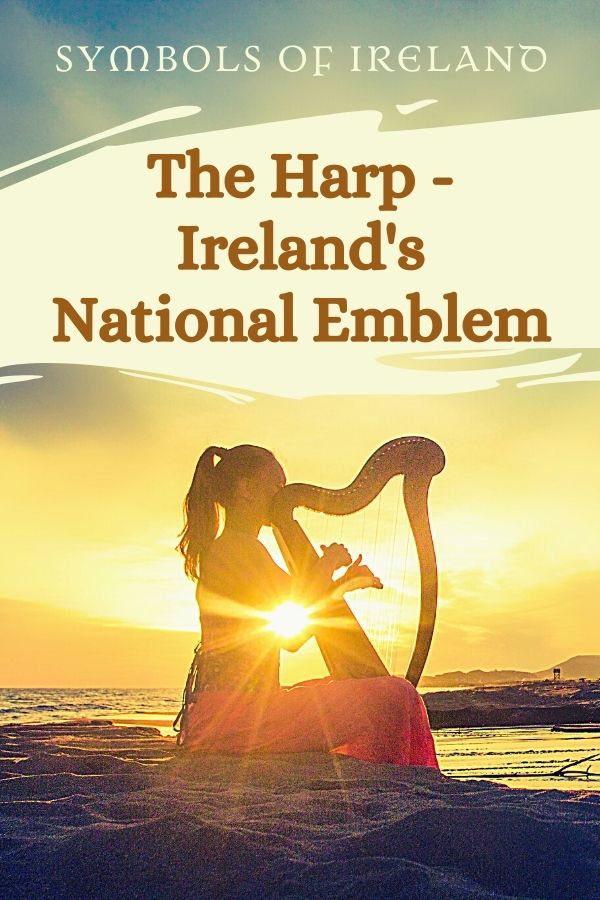