Mincemeat is a festive filling for baked goods that is very popular in Ireland and the United Kingdom during the Christmas Season.

Don’t worry there’s not an ounce of meat or beef in this concoction of mixed fruits, almonds, spices, and of course, a little booze.

Many people take the easy peasy route at Christmas and opt for store bought mincemeat to fill their pies. But trust me, making festive mincemeat is far easier than it may seem.

And my recipe is extra easy since I use my crock pot or slow cooker to heat the mixture to meld the flavors together.

This is the sweet filling used to make mince pies at Christmas time in the United Kingdom and Ireland.

History and Origins of Mincemeat

Why do we call this sweet pie filling mincemeat when in fact their is no meat used at all? The answer lies in history.

In the 11th century Crusaders from the British Isles returned from the Holy Land and introduced the people to new oriental spices.

Christmas pies were created using cinnamon, cloves and nutmeg for the first time. Originally, the mince pie was made to honor the birth of Jesus. It was made in an oblong shape like a cradle or manger, with an indentation to hold the Christ Child.

Three spices (cinnamon, cloves and nutmeg) were incororated into these early mince pies. These three spices represented the three gifts given to the Child Jesus by the Magi or Wise Men from the East.

On December 25th the child was removed from the Christmas pie, and eaten by the children to celebrate his birth.

Way back in the 15th century to the 17th century a savory pie filling was made using minced meat combined with dried fruits, vinegars and wine.

Generations of English kings and queens have celebrated their coronations by enjoying a mince pie or two.

By the 18th century, spirits such as brandy, whiskey, or rum started to replace vinegar or wine for preserving this mixture of meat, and enhancing the flavor.

Over the centuries the recipe evolved from a main course to eventually featuring on the dessert menu, with all traces of meat eliminated.

By Victorian times brandy had completely replaced the wines and this old traditional recipe was reborn as a festive yuletide treat.

Mince pies became very popular during the 19th century. In Victorian times it was thought to bring luck if you ate one mince pies on each of the twelve days of Christmas (from December 25th through to January 6th, the Feast of the Epiphany).

Butter vs Suet in Mincemeat

Many recipes call for the use of suet as the fat that binds the mincemeat together.

Suet was used in years gone by to help preserve the mincemeat while being stored over long periods of time. The suet is mixed throughout the mixture and helps to bind it together, while adding texture and flavor.

I find that full-fat real butter can make the same condtributions to a homemade mincemeat recipe.

I prefer to make a suet-free mincemeat and simply use melted butter instead. For strict vegetarians the butter or suet can be substituted with vegetarian suet.

Now, of course being Irish, I opt for Kerrygold butter, since I prefer the flavor, and the fat content is higher than in American butter, since Irish butter is made from the milk of grass fed cows.

If you can, make your slow cooker mincemeat well in advance of Christmas Day so that the wonderful flavors have a chance to fully develop and soak into one another.

Mincemeat can be simmered in a pot on the stove top. However, making it in a slow cooker is hassle free. The dried fruits plump up nicely during the slow cooking process, so this is the method I highly recommend for homemade mincemeat.

A low, slow simmer in a crockpot greatly enhances the flavor development when cooking mincemeat.

Mincemeat is used for many different bakery delicacies at Christmas time. Small, hand size mince pies are the most common use.

Large lattice topped pies or tarts are often filled with this swet and savory delicacy. It can be added to cake batter to add texture, flavor and a true taste of Christmas.

It can be added to the batter for steamed puddings and can be used to make puff pastry palmiers.

Rich, fruit filled desserts are part and parcel of an Irish Christmas.

Here’s a list of the ingredients required. You’ll find US and Metric amounts in the printable recipe at the end of this post.

I use light brown sugar for this recipe, but if you prefer more caramel tones in your mincemeat, then substitute dark brown sugar.

This recipe uses a combination of dark raisins and golden raisins, which are called sultanas in Ireland and England.

Add the fruit, almonds and spices to a large mixing bowl.

Festive Irish and British baking and cooking recipes frequently use a special blend called mixed spice. This is a unique combination of spices. You can use pumpkin pie spice in America but the final flavor of your mincemeat will be slightly different to authentic Irish mincemeat. I have a recipe for homemade mixed spice Irish style, which I recommend

Then add the grated peel of the oranges and lemons.

Mix them thoroughly together.

Then add the the lemon and oranges juices.

It’s important to coat the fruit in the sugar and citrus juices.

Next add the melted butter and stir the fruit to completely coat it in butter.

The only ingredient not in the bowl is the brandy. That doesn’t get added until the next day.

And now you have to play a little waiting game. Cover the bowl with a cloth and place it in a cool place for at least 12 hours or overnight.

This gives the ingredients a chance to do a little mingling in the bowl – it’s time for melding together and sharing their deliciousness.

Next transfer the mixture to the crockpot. Cook it on the low setting for 3 to 4 hours. It’s important not to overheat the mixture since this could cause the fruit to start to ferment.

Alternatively you can place the mixture in an ovenproof dish and bake it at a low heat of 225 degrees Fahrenheit for 3 hours.

When the mincemeat has finished cooking let it cool completely before adding the brandy. Mix the spirits through the mixture completely to allow every piece of fruit a chance to soak it up.

You can use rum or whiskey, but my favorite has always been brandy.

Now your mincemeat is ready for storing.

Transfer the mincemeat into sterilized preserving jars. Here’s my tutorial on three different methods for sterilizing jars for preserves, jams or mincemeat.

You can use old jam or jelly jars and cover them with wax paper discs. Do not skip on sterilizing the jars, otherwise you run the risk of spoiling your mincemeat.

Store your airtight containers of mincemeat in a cool, dark pantry or cupboard. It will keep for up to a year. I like my mincemeat to be made at least two weeks before I use it to ensure the flavors have matured.

The longer it stands the greater the depth of flavor. No need for a freezer if mincemeat is properly stored in sterilized jars.

Here’s the printable recipe. Under the ingredient list you’ll find a tab for switching between US and Metric measurements. 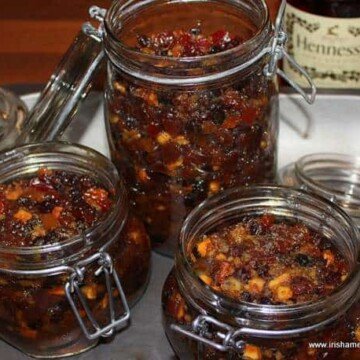 Happy Christmas baking and preparations to everyone.

Here are some more of my Irish Christmas Recipes:

Here’s a pin friendly image for any Pinterest fans:

Check out all my Irish Recipes tweaked for cooking success in America.