A scarecrow cheeseball appetizer is perfect for fall or Thanksgiving get-togethers.

Formed with a cheddar, Velveeta and cream cheese mixture that’s molded into a disc, the scarecrow’s face is created using olives for eyes, a grape tomato for a nose, and a strip of red pepper as a mouth.

Matchstick carrots are perfect for straw like hair, and crackers form a rustic scarecrow hat.

As I was working on this fall scarecrow appetizer I got to thinking about the importance of scarecrows in rural Ireland in years gone by.

And, so before I share this cute fall appetizer recipe, that’s always a hit with kids both young and old, I thought we’d explore the importance of scarecrows in Irish culture and heritage.

Time for a little ramble before we delve into my recipe.

Let’s start with a riddle from rural Ireland. Here’s how it goes…

What is it that has one leg on which it stands,

wears clothes and has two hands,

lots are afraid of it,

yet it has no life in its body?

Here’s another riddle from my Irish childhood…

What crow has no feathers?

If you have any scarecrow riddles why not let us know by sharing them in the comment section at the very end of this post.

Scarecrow Rhymes From Days Gone By

I love to read the Irish folklore collection on the Dúchas.ie website, and I found two versions of the following rhyme. The first one is from Ulster, and the second version is from Dublin.

As I went up slippery lane,

I met my Auntie Joisie,

She had iron toes and a wooden nose,

And upon my word she would frighten the crows.

or here’s another version

As I went up the hill of Tara

I meet my Auntie Jamie,

And I declare she would frighten the crows.

It appears poor old aunties Joise and Jamie were a sight for sore eyes.

Instructions For Making A Scarecrow From The Irish Folklore Collection

Scarecrows were made by Irish farmers in centuries past to keep crows away from their crops. Black crows are very widespread in Ireland, so the services of scarecrows were required before the arrival of the automatic bird dispersal equipment of today.

Here are the instructions for making an old fashioned Irish scarecrow. This is an excerpt from the Irish Folklore Collection which has been shared online. These treasure troves of cultural heritage were collected by a governmental folklore commission in the 1930’s.

A Donegal woman, who was living in County Meath, contributed the following piece about how to make a scarecrow.

“A scarecrow is made in the following manner :-

A long stick in the shape of a cross is put down in the ground representing the body of a man.

An old coat and a pair of trousers are then put on the imaginary body, and a turnip made in the shape of a head to represent the man’s head.

Holes are bored in the turnip shaping the eyes, nose and mouth of the man, and this is attached to the body.

The so-called man wears an old hat and is usually smoking a pipe, or has something in the shape of a gun in his hand.

The scarecrow is generally set up in the middle of a tillage field where seeds or potatoes are sown. It prevents the crows from taking the potatoes or rooting up the seeds.”

Scarecrows made an appearance in old Ireland on Shrove Tuesday or Pancake Tuesday, before Lent began.

On Shrove Tuesday night a fake man made like a scarecrow was put in a tree opposite the home in which a young girl of marriageable age lived. This scarecrow was known as a Brídeogach (pronouced breed-oh-gock).

The “Brídeogach” was considered a sign that the girl cannot get married until after Lent is over, and the only man in her life for the duration of Lent could be the scarecrow in the tree.

In some parts of Ireland the “scarecrow” was dressed and placed high in a tree near the house of an old maid or an old bachelor.

Old Irish wedding customs in centuries past involved the arrival of strawboys to the celebration.

When a couple got married, men dressed up as straw men, and visited the bride’s house for the post wedding party. Known as the “Collicks” in some regions, these straw men spent the night dancing to the lilt of their own music.

The night the newly weds returned from a honeymoon the “Collicks” returned to greet them, dressed in their scarecrow costumes. If they were recognized they would leave.

This is the name for a scarecrow in the Irish language.

Fear bréige is pronounced as far bray-ga. It quite literally means a false man.

Ireland is a land of festivals, and there are some whacky and quirky festivals held in different parts of the country during the summer months (all on hold for 2020, but they’ll hopefully resume in the not too distant future.)

Enough of my scarecrow ramblings. Let’s get on with making this cheesy appetizer.

Ingredients for a Scarecrow Cheese Appetizer

Here’s what you’ll need for the cheeseball.

Here’s what you’ll need to decorate your scarecrow…

First make the cheese ball or disc. It needs to be refrigerated before decorating, so plan this recipe in advance if you’d like to use it for a party or a potluck.

Place all of the ingredients for the cheese ball into a large mixing bowl. Beat them all together until they’re completely blended.

Line a flat bottomed, deep dish platter with a layer of plastic wrap.

Leave additional plastic wrap over the edges so that they can be folded back over the cheese ball to keep the air out as it chills in the refrigerator.

Refrigerate at least one hour prior to decorating and serving.

Across the side of the circle designated as the top, place a row of five Triscuit crackers about one inch below the top of the circle. Gently press the crackers into the cheese.

Then, place a row of four crackers over the first row at the top of the cheese disc. This forms the bowl of the scarecrow’s hat above the lower cracker hat rim.

Add a small piece of parsley as the flower. Arrange the matchstick carrots as straw hair below the hat.

To make the scarecrow face, slice the black olives and place two slices as eyes. Press the grape tomato into the cheeseball as the nose.

Then, press the red bell pepper slice into the cheeseball as a mouth.

If you’d like to add this recipe to your printed collection here’s a printable version. 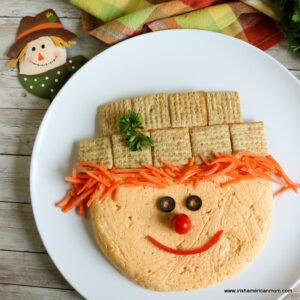 For the Cheeseball or Scarecrow Face

To Decorate the Scarecrow

And there you have it – my Thanksgiving starter. I hope you like this scarecrow cheese ball. It’s such a cute appetizer for young and old.