×
Home » Irishisms » Irish Superstitions » What I Miss About Ireland: Robins

Robins remind me of Ireland. These little red breasted warblers are found throughout Ireland, even in cities and towns.

Robins love to sing and in Ireland they sing all year round, even in the winter.

If I was to name my favorite bird, it probably would be a robin.

I remember gardening with my mother as a child, and being amazed by how tame robins appeared. They often followed us around the garden, pecking for worms and insects in the grass as we worked.

Irish robins are much smaller than the American variety. I remember seeing an American robin for the first time and being amazed at how big it was. I suppose everything is bigger over here.

Today's post focuses on little Irish robins. Thanks to a good friend Anthony in Donegal, for sending me these amazing photos of my favorite little songbird. 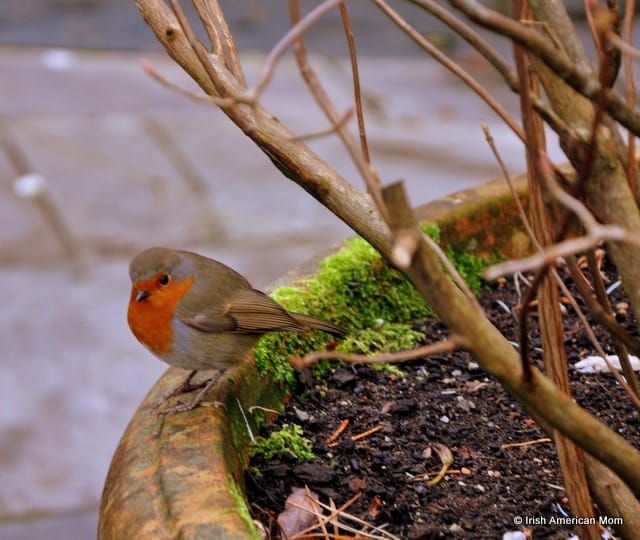 As children we learned the robin is God's own bird, sacred and revered in  legend and folklore.

We were enthralled by the story of how a little robin tried to remove one of the bloody thorns piercing Christ's head at the time of the Crucifixion. A drop of the Lord's blood fell on the little brown bird, staining its chest red.

Then there are the lines from William Blake:

"A Robin Redbreast in a Cage

Puts all Heaven in a Rage."

~ From "Auguries of Innocence by William Blake

There are many Irish superstitions surrounding robins.

Above all is the warning never to take the life of this red-breasted songster. It is believed that anyone who kills a robin will have a life full of misery, clearly expressed in these old words of caution:

"Whoever kills a robin redbreast will never have good luck,

Even if they lived to be a thousand years old. "

Another old Irish lesson about kindness to robins tells that if anyone kills a robin a large growth will grow on the assailant's hand, preventing the killer from working or playing hurling (an ancient Irish team sport played with sticks and a ball).

Celtic Tales of Wrens and Robins

There is an old Celtic tale that tells of the rivalry between the wren and the robin. An eternal feud simmers between the Holly King of Winter (a wren) and the Oak King of Summer (a robin).

On the Winter Solstice the robin or Oak King drives the Holly King or wren away.

The reverse happens at the summer solstice when when the Holly King defeats the Oak King.

The two kings or birds are said to engage in a battle with no end. This represents the wheel of life and the seasonal cycles. We transition from the light half to the dark half ot the year at the solstices. 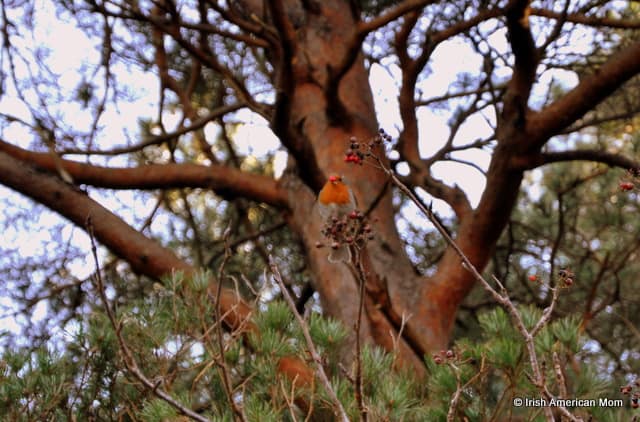 The robin is supposedly blessed with amazing powers for predicting the weather.

The little bird may even be more accurate than Ireland's rain weary meteorologists with their never ending warnings of scattered showers. 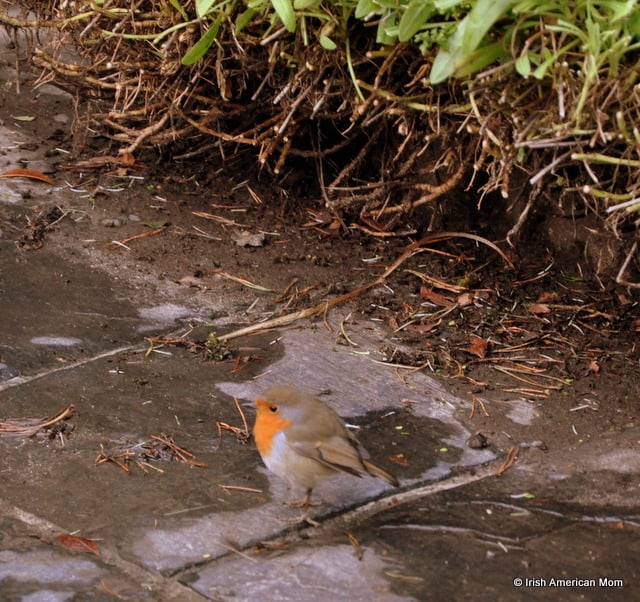 Why are robins associated with Christmas Time

Robins are associated with Christmas time, first appearing  in the 19th century on traditional Victorian cards. Ever since their red foliage has been linked with the holiday.

The tradition of sending Christmas cards started in Victorian Times. Postmen or mail men at that time wore bright red uniforms. They were nicknamed mail robins or redbreasts. Because they delivered Christmas cards, the robin therefore became associated with these festive greetings and pictures of the little red breasted birds started appearing on card.

This favorable and popular view of the robin in Ireland is not supported by its disposition.

They are fiercely territorial and love a good old brawl. Maybe that's why we Irish like them so much. This affinity for a good fight is not uncommon in birds.

What makes robins different is that they fight fiercely, often to the bitter end. They're not quitters and therefore worthy of our admiration.

Robins are also said to be able to predict death. A robin flying into a home through an open window is an ominous sign.

My granny always told us how a robin flew into her kitchen on the day she lost her three year-old son, my uncle Danny.

From the time of his birth in the early 1930's he suffered from hydrocephalus and "a lump on his neck". Today we know his diagnosis was probably spina bifida.

Yet Granny never feared robins nor blamed the little bird for being a messenger of doom.

She believed the robin was sent from God to help prepare and console her at the time of her great loss. She taught us to love robins too. 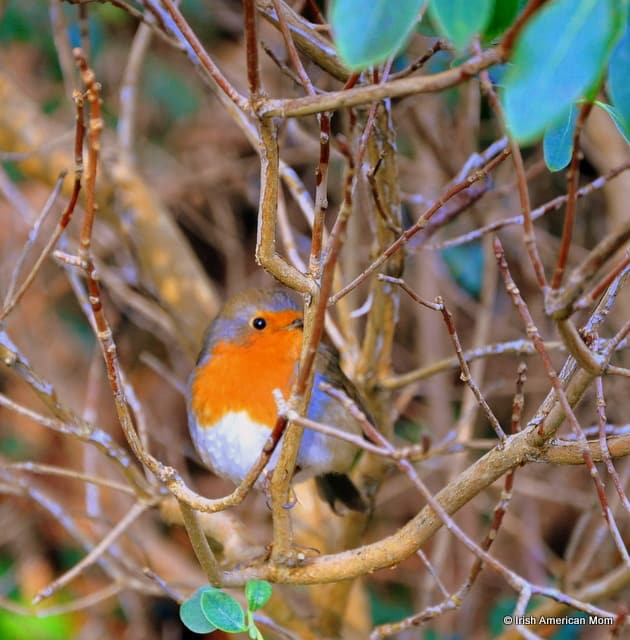 Wishing on the First Robin of Spring

Time for one last piece of advice. If you see the first robin of spring, make a wish. But do so quickly.

This old wives' tale warns that if the bird flies away before you have made your wish, you have an unlucky year ahead of you.

And so I hope these photos of Ireland's most common and best loved songbird brings you a little smile today. Here's to all the wishes waiting to be granted by those first robins of spring.

Share my recipes and ramblings with the world
18
18
Shares
18
Shares
18
« Exploring With My Discover Ireland
Fish On Friday And The Discovery Of The New World. »