Slieve Binnian is a mountainous peak nestled in the Mountains of Mourne.

It’s the third highest peak in Northern Ireland reaching a height of 2,451 feet or 747 metres.

On a sunny day, those who make it to Binnian’s summit are rewarded with some of the most spectacular scenery in all of County Down, or in all of Ireland, or even in all the world. 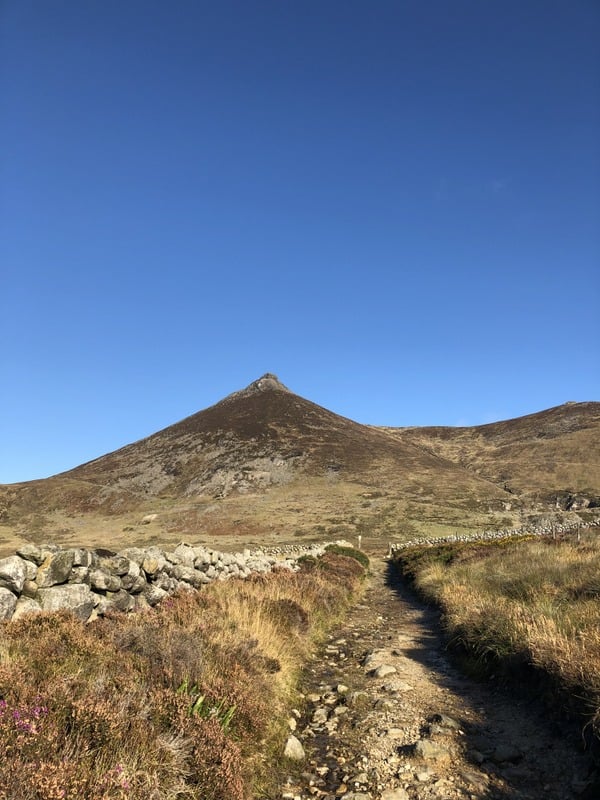 Today I have another armchair photo tour of Ireland to share with you, thanks to the generosity of a reader in Ireland.

Brian loves to spend his Sundays hill walking and climbing with his son, exploring the many wonderful peaks found throughout Ireland.

Brian works for an amazing animation production company based in County Kilkenny, called Cartoon Saloon. The studio is best known for its animated feature films The Secret of Kells, Song of the Sea, and The Breadwinner. Over the years they have been nominated for four Academy Awards, but more on that another day.

For now, let’s just take a hike to the top of Slieve Binnian with Brian.

Many climbers believe that Slieve Binnian provides a far more rewarding experience at the summit, than its taller sister peak, Slieve Donard.

Brian’s photos are evidence of how this may be very true. 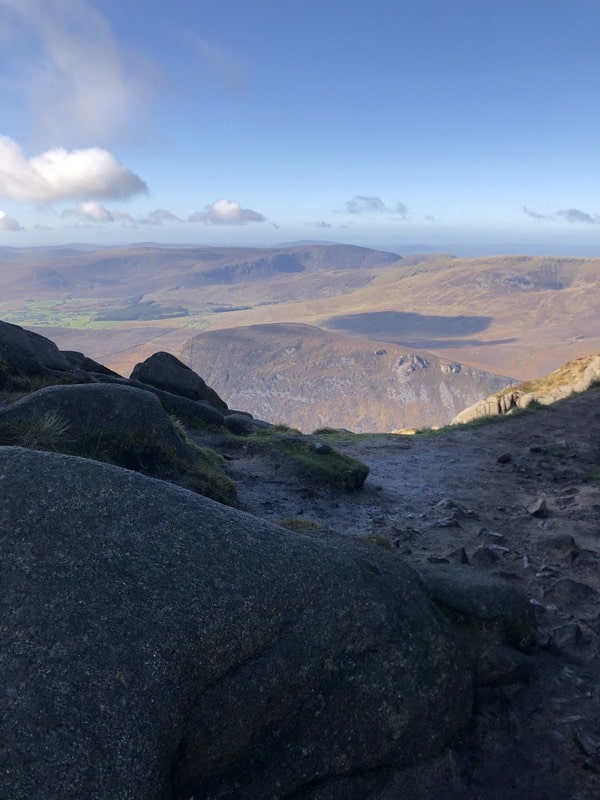 I’m adding this mountain to my “to do list” for climbing in Ireland. I can only imagine how arriving at the stunning rocky tors must feel like stepping into another world, or being surrounded by a playground of large rock formations just waiting to be explored.

The summit of this Mourne peak is broad and flat. Big rocky tors are perched at either end.

You’ll find goat trails criss-crossing the summit. The goats have worn out an easy navigation trail across the top.

As you climb I highly recommend stopping to perch on a rocky outpost to simply take in the view.

These are views to quite literally write home about. 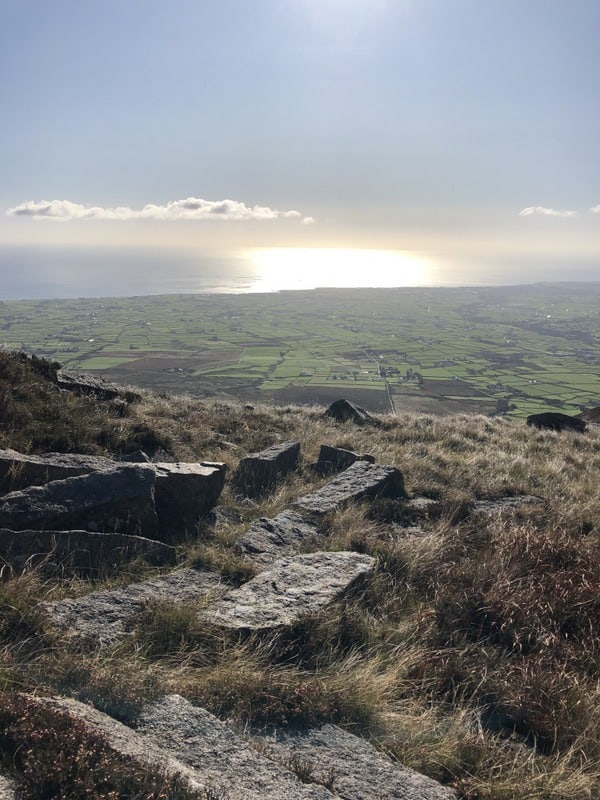 On a clear day you can peer across the Irish Sea and sometimes even catch a glimpse of the Isle of Man, an island that lies between Ireland and England.

At the top of this peak you’re surrounded by the grandeur that is Ireland, and can truly appreciate how the Mountains of Mourne sweep down to the sea.

Gaze southward and you may spot the Ben of Howth in the distance. Slieve Gullion in County Armagh lies to the west. There are lakes and reservoirs aplenty including Camlough, the Silent Valley and Ben Crom reservoirs. 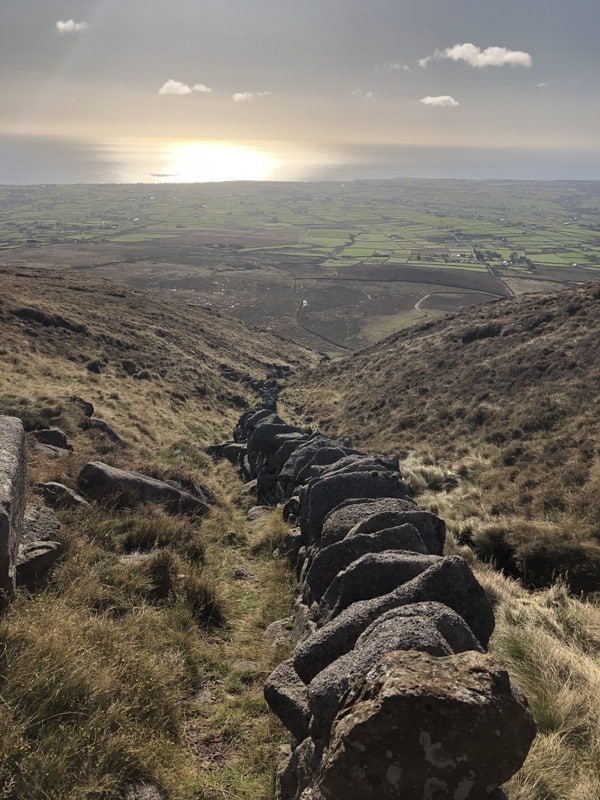 Hillwalkers often claim that Slieve Binnian is the perfect vantage point for taking in the horseshoe shaped Mountains of Mourne.

It lies at the most southerly point of this hilly amphitheatre. The sun shines from behind and illuminates the vista before you to the north. 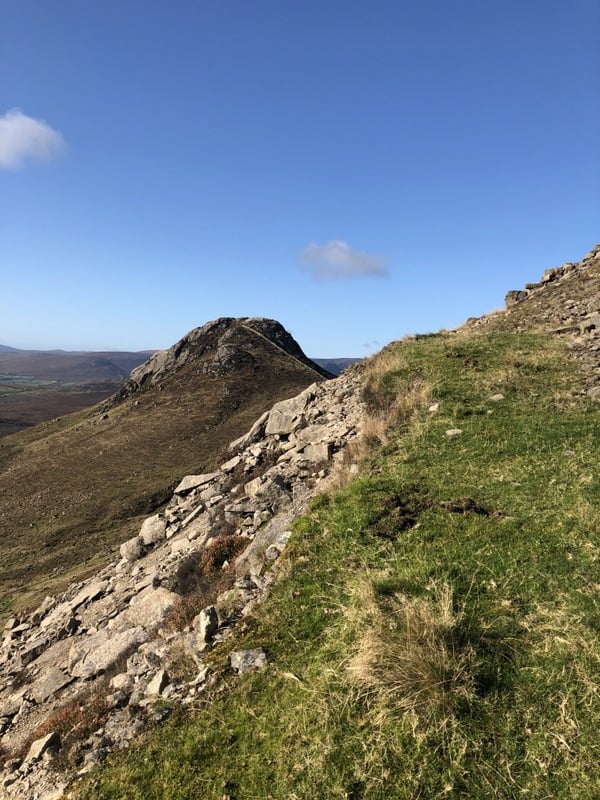 And there is no place on earth quite like the Mountains of Mourne bathed in sunshine and stretched out before you.

Climb the peak of Slieve Binnian to observe Ireland, both North and South, from a perfect rocky perch on top of the world.

Here’s a video Brian sent for you to enjoy and appreciate a full 360 degree view from the vantage point of Slieve Binnian’s summit. Notice how windy it is at the top. Keeping a phone camera steady is difficult at this height in blustery Ireland.

When there’s no haze or mist you can see for vast stretches across land and water, up to 30 miles away. 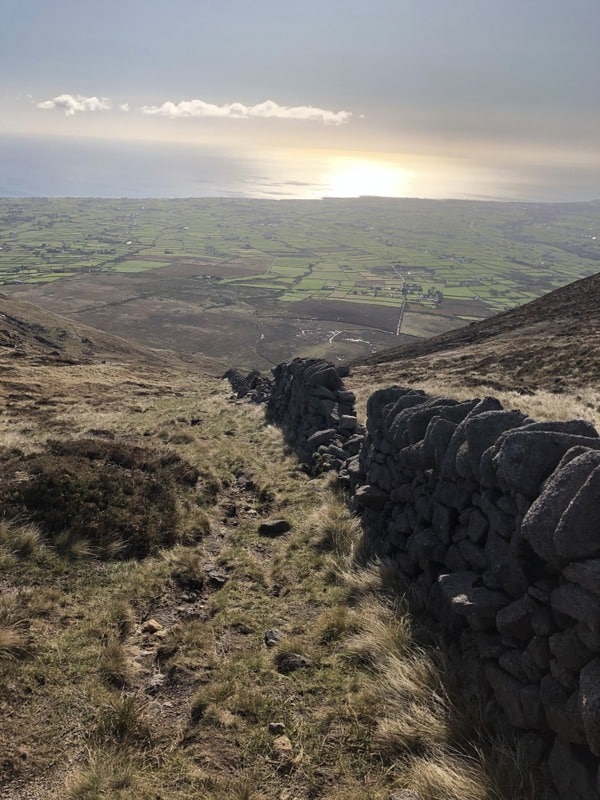 Many thanks to Brian for sharing his amazing photographs.

I hope this little tour brought a little piece of Ireland to you, wherever you are in the world.