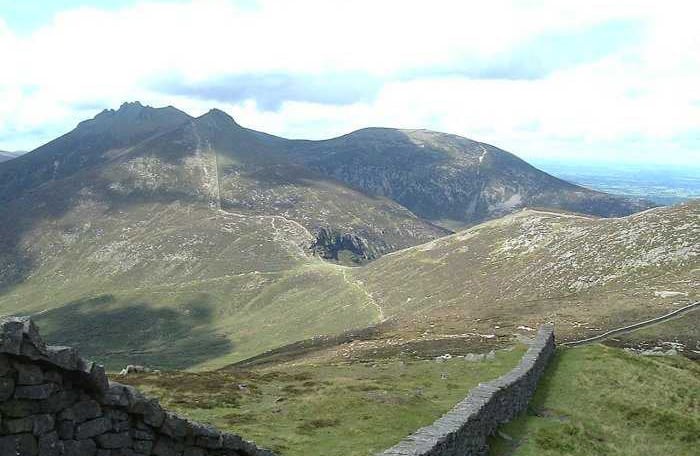 Today we resume our tour of Ireland’s thirty-two counties with a visit to the county made famous by Percy French’s song, The Mountains of Mourne, which truly do “sweep down to the sea.”

Here’s a short video to introduce you to the beautiful landscapes of County Down.

County Down is one of the nine counties in the ancient province of Ulster, and is one of the six counties which comprise modern day Northern Ireland. 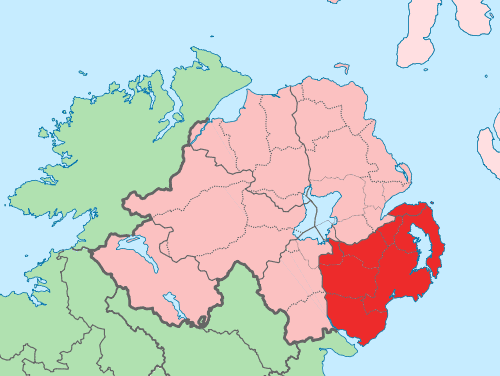 It is named after it’s county town of Downpatrick, which is Dún Pádraig in Irish, meaning Patrick’s stronghold.

On our tour today we will start in southern County Down, working our way around the coast to Belfast, concluding our journey inland. 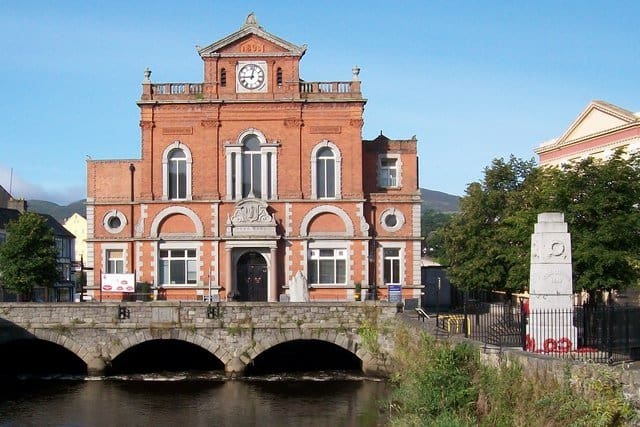 The city of Newry is divided by the River Clanrye with half of the city lying in County Down and the other half in County Armagh. It is a thriving market town, attracting many shoppers from southern counties in the Republic of Ireland.

It is home to the Newry & Mourne Museum, whose collections reflect the rich and diverse cultural heritage of the surrounding area. 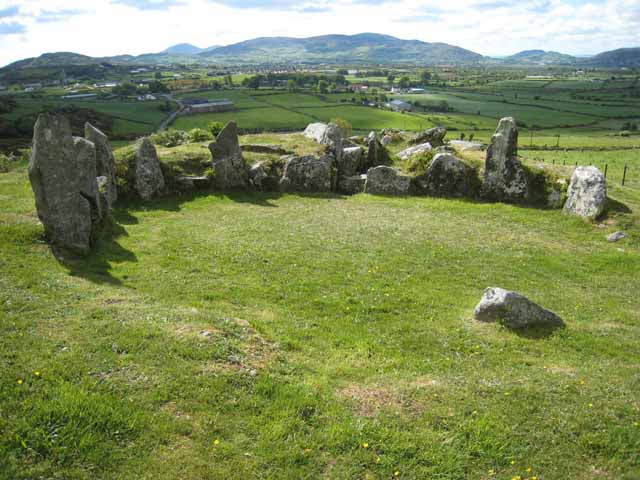 Lying close to Newry, the Ballymacdermot Chambered Cairn is a Neolithic burial chamber which can be dated to between 4000 BC and 2500 BC. 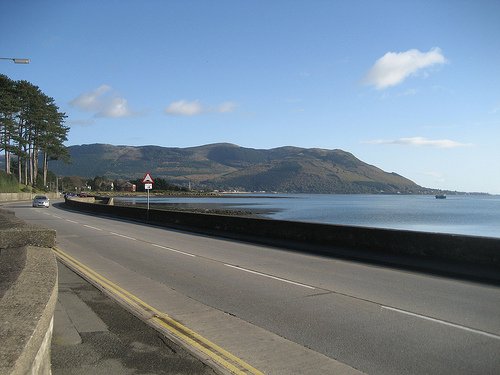 Driving eastwards from Newry along the northern shores of Carlingford Lough, breathtaking sights await. Picturesque villages are nestled between forests and mountain valleys, with sandy beaches meeting the waters of this glacial fjord or sea inlet.

The town of Warrenpoint is home to the Burren Heritage Center, which tells the history of the region. Although the name is shared with the more famous Burren of County Clare, this museum exhibits are specific to County Down.

Rostrevor is a quaint village renowned for its folk music. Nearby is Kilbroney Forest Park, where wooded trails by shaded streams, give way to magnificent views of mountainous landscapes, the lough, and the Victorian village of Rostrevor. 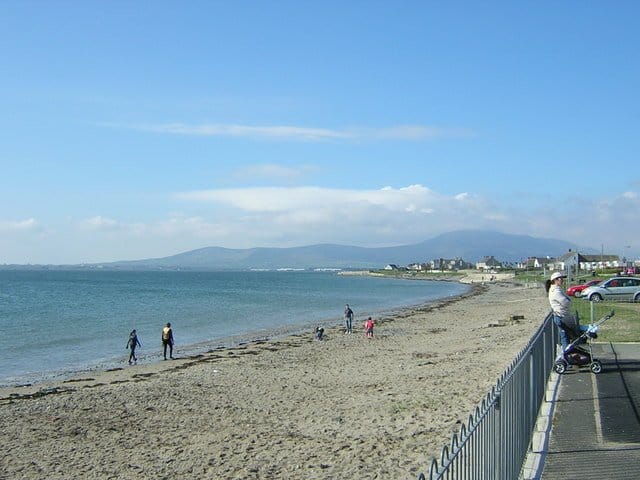 Near the mouth of Carlingford Lough lies Cranfield Beach, a favorite summertime destination for tourists. It lies just south of the fishing town of Kilkeal.

The Mountains Of Mourne: 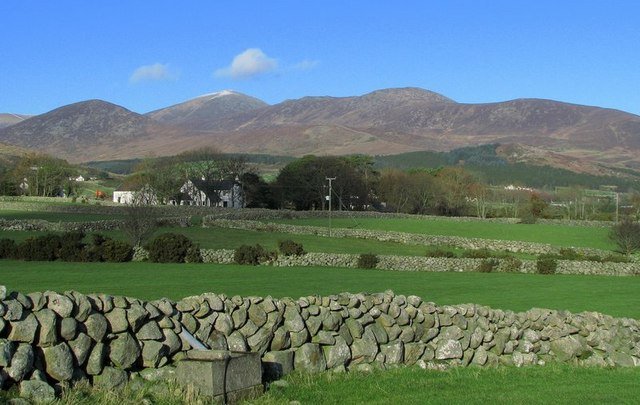 The Mountains of Mourne provide a breathtaking backdrop on the coastal drive around the southern shores of County Down. This granite mountain range consists of 15 spectacular peaks, with names like Slieve Binnion and Slieve Muck. The word Slieve is derived from and pronounced like the Irish word ‘sliabh’ which means mountain. 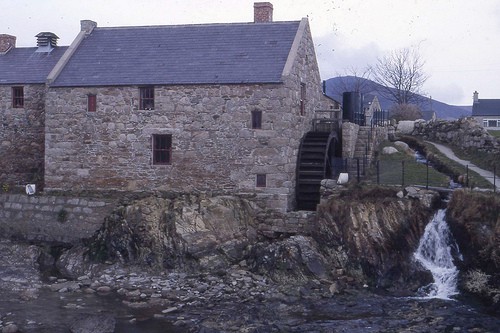 The seaside village of Annalong lies in an idyllic setting at the foot of the Mourne mountains in the southern corner of the county. The old cornmill was one of the last working watermills in Ireland. 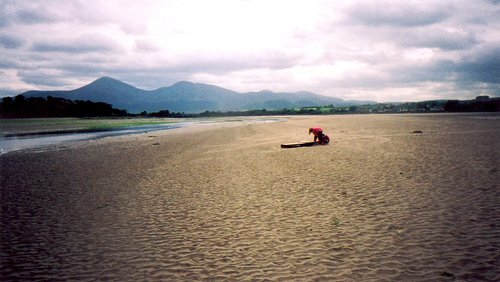 Newcastle is a favorite seaside get-away on the Irish Sea and is the spot where the Mountains of Mourne truly do sweep down to the sea.

The Murlough National Nature Preserve includes a magnificent beach and some of the oldest sand dunes on the island of Ireland.

Newcastle is also home to the Royal County Down Golf Club, a championship links and site of the 2007 Walker Cup. 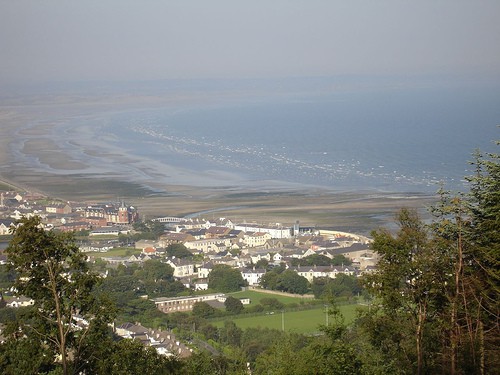 Lying at the base of Slieve Donard, the highest peak in Ulster, the town of Newcastle looks spectacular from the side of the mountain, as the magnificent peak rises above the buildings, sea and sands below. 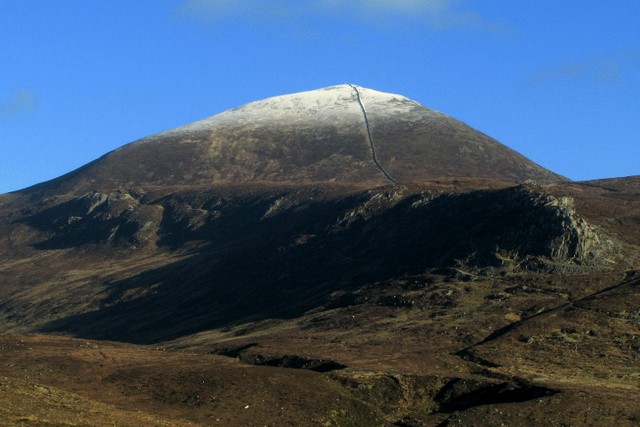 Slieve Donard is a favorite climb for hill walkers from all over Ireland. It is included in the four peaks challenge, when climbers attempt to make the summit of the highest mountains in each of Ireland’s four provinces over one three-day weekend. 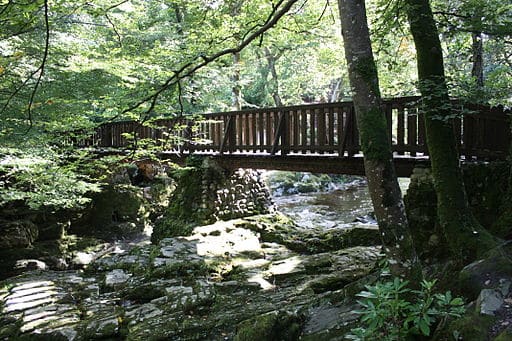 Tollymore Forest Park, at the base of the Mourne Mountains, offers nature trekkers panoramic views of the surrounding scenery. 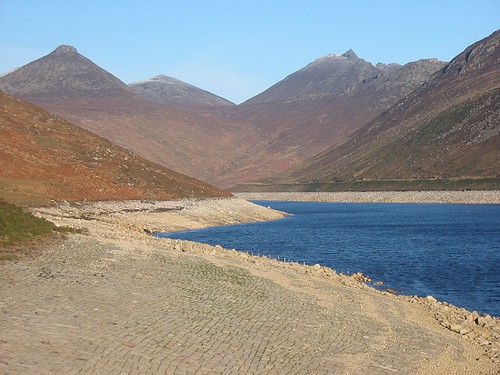 The Silent Valley Reservoir provides much of the water supply for the city of Belfast. It is ringed by the peaks of the Mourne mountains. The grounds are open to the public, providing access to a unique and peaceful landscape. 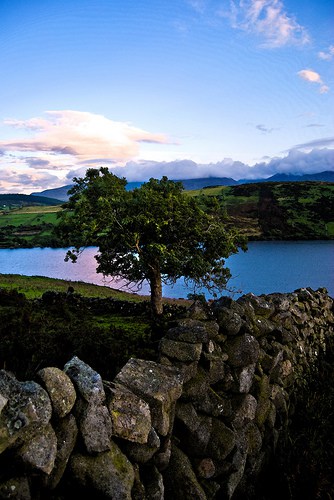 Castlewellan Forest Park attracts tree enthusiasts from many countries. It boasts a magnificent arboretum, a lake walk, and a walled garden dating back to the 1850’s. 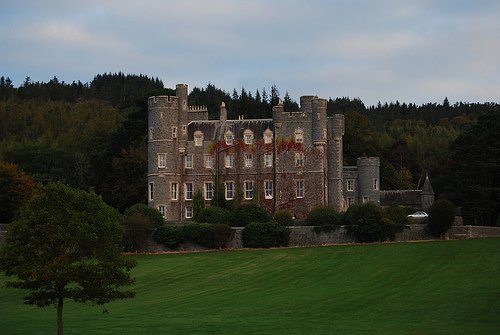 Castlewellan Castle was built in 1856, and is a stunning example of Victorian architecture.

The Castlewellan area is also home to Drumena Cashel an ancient stone fort.

Downpatrick & The Legacy Of Saint Patrick: 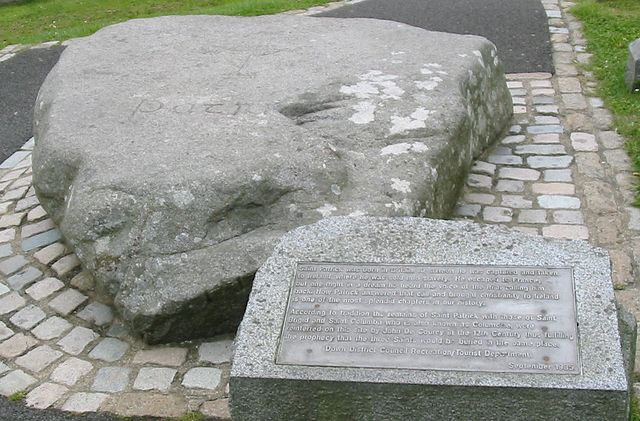 Downpatrick is one of Ireland’s most historic towns, named after our patron saint, with deep rooted ties to his ministry on the island. St. Patrick is said to have been buried here in 461 on the grounds of Down Cathedral. 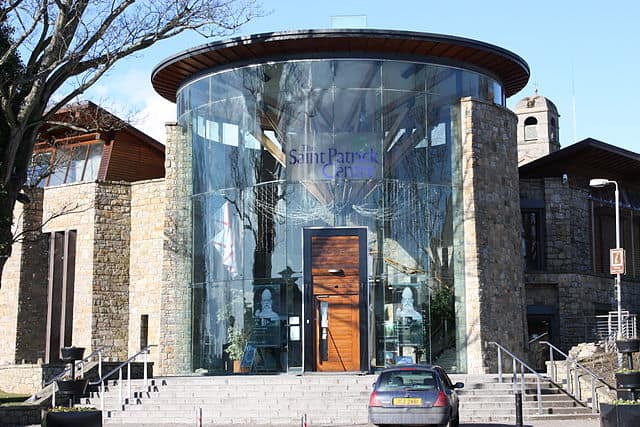 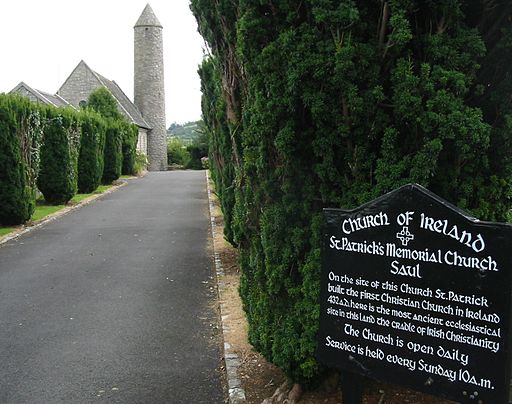 Nearby in Saul Co. Down lies one of the oldest churches in Ireland, where St. Patrick reputedly built the first Christian Church on the island. 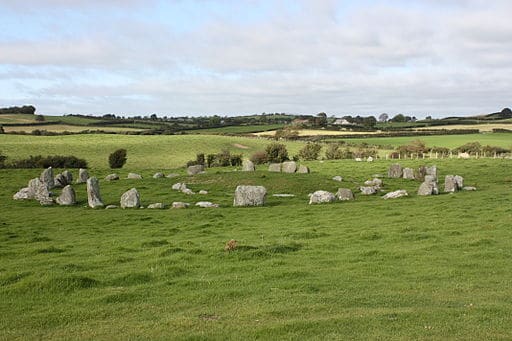 Ballynoe Stone Circle dates back to around 2000 BC. 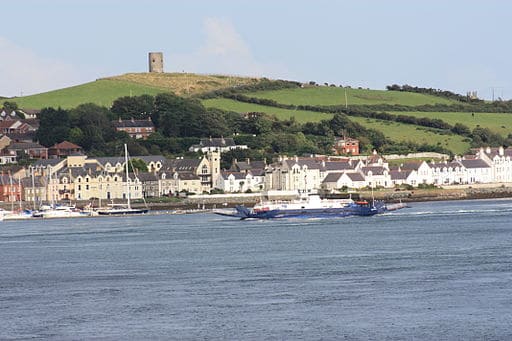 Strangford Lough is a large sea inlet separated from the Irish Sea by the land mass of the Ards Pennisnula. The town of Strangford at the mouth of the lough is connected to the southerly town of Portaferry on the Ards Penninsula by a ferry. Portaferry is home to Exploris, the Northern Ireland Aquarium.

On the western shore of the lough lies the Castle Espie Wetland Center. Other sites worth visiting include Delamont Country Park, and Killyleagh Castle. 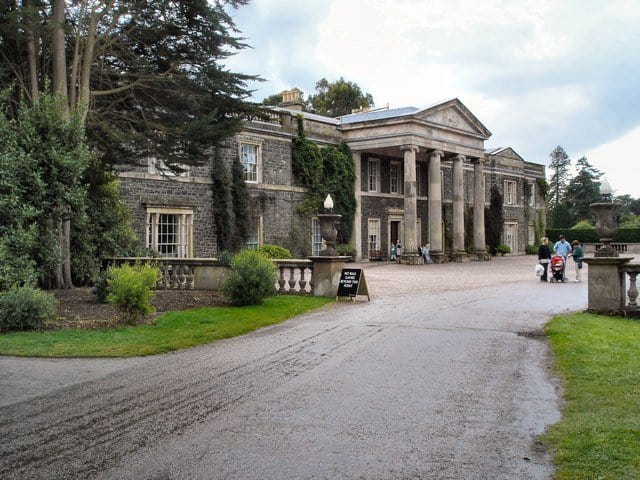 Mount Stewart, on the Ards Penninsula, is an 18th century house with magnificent gardens to explore. It is part of the National Trust and was once the home of the Marquesses of Londonderry.

Ballywalter Park remains a private dwelling but tours of this splendid home are available. 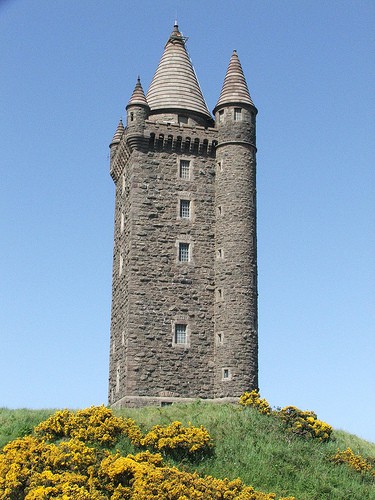 Scrabo Tower overlooks the town of Newtownards. It offers incredible views of the surrounding countryside and lough. 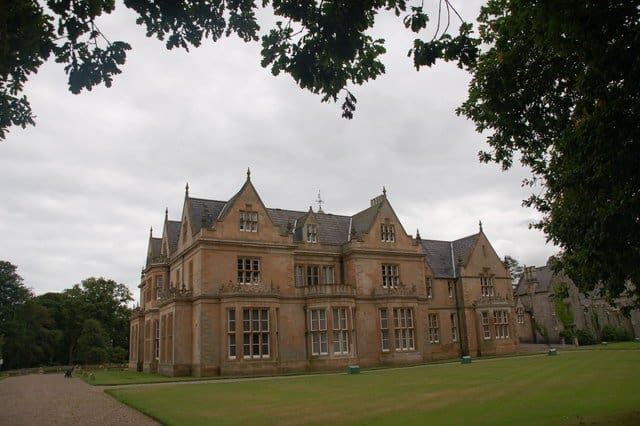 Bangor lies east of the city of Belfast on the shores of Belfast Lough. It is surrounded by fantastic tourist attractions including country parks, beaches, coastal walks and old churches and abbeys. 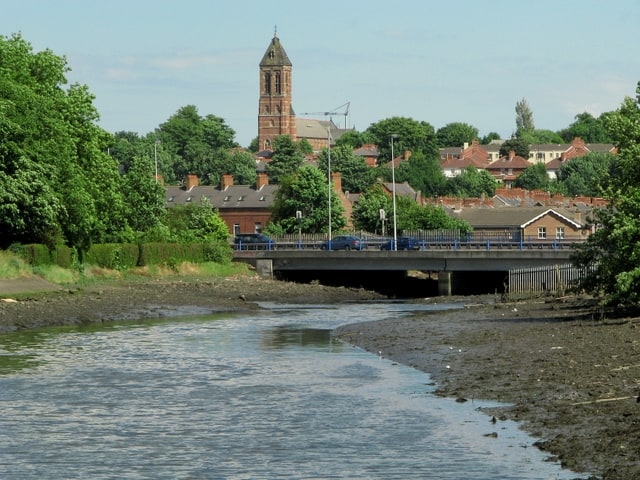 The City of Belfast lies partially in County Down, with many of its suburbs lying within the county.

Other Points of Interest: 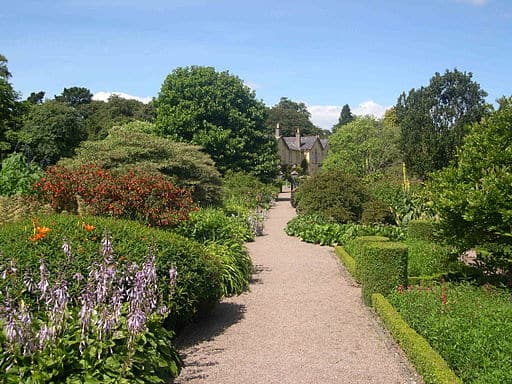 Rowallane Gardens in the center of the county are yet another example of a spectacular display of shrubs and flowers in a magnificent natural landscape. 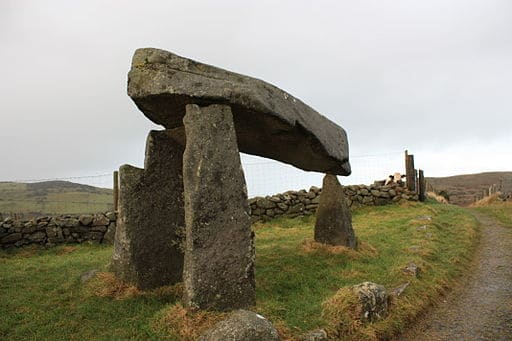 Near the town of Banbridge the Legananny Dolmen can be found nestled amongst farmers’ fields. Beneath these ancient stones probably lie the remains of some unknown Celtic chieftan.

And so, we conclude our short trip around the magnificent County Down. There are many more forts, castles, mountains and points of interest I failed to note in this short post. Just rest assured, this little corner of Ireland, is truly a tourist’s paradise.

Here are a few more links to help with planning a trip to County Down.

As I publish each new county post, I will add a link to this alphabetical list of Ireland county-by-county.

Wishing you all happy Irish travels.