You are here: Home / Irishisms / Books / The Hadley Academy for the Improbably Gifted By Conor Grennan

The Hadley Academy for the Improbably Gifted is a fantasy novel that follows a teenage boy’s unlikely journey to save the world. 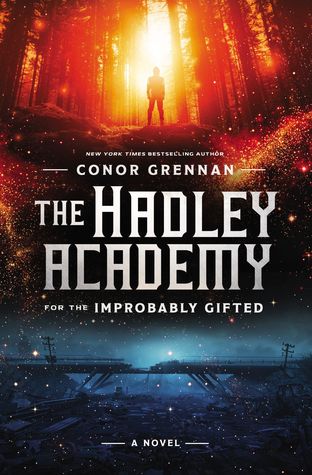 Plus I’m also thrilled to introduce you to Conor Grennan, an Irish American with an incredible story to tell.

I have a copy of this brilliant children’s book for one lucky reader to win, but before I share the details of how to enter our little giveaway, let’s first learn about the gripping plot and unforgettable world created by Conor Grennan in his latest work.

Introducing The Hadley Academy for the Improbably Gifted:

Here is a quick synopsis of the book provided by the publisher….

“Jack Carlson is dreading a class presentation when he suddenly finds himself transported to the Hadley Academy, a secret institution that tracks teens with unlikely gifts and trains them to protect the world from an unseen squad of killers.

But Jack isn’t the only one who doesn’t know what he’s doing at Hadley. Despite indications that he is the one prophesied to end the ancient Reaper War, Jack appears to have no extraordinary abilities. 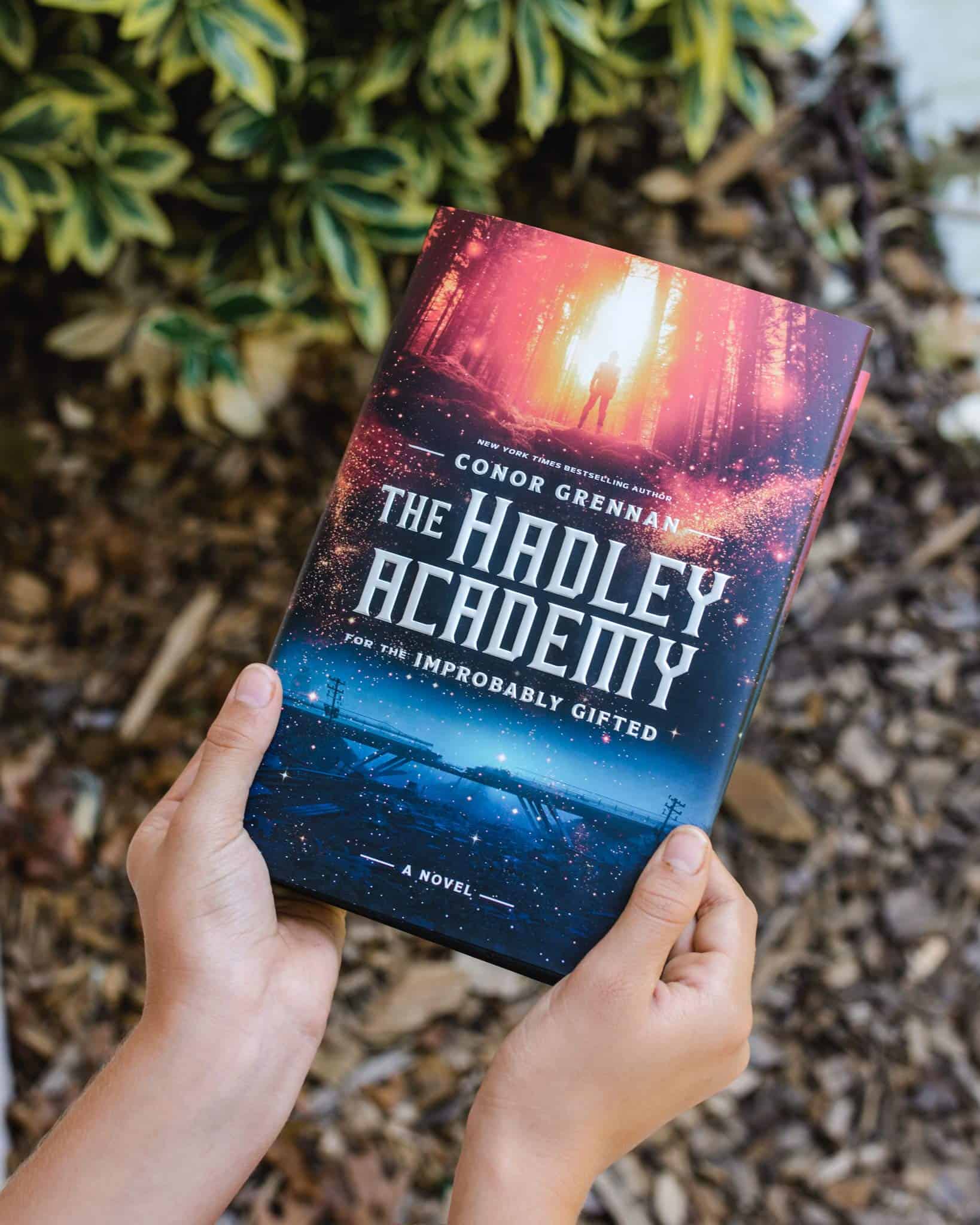 So when dark, mysterious forces grow, Hadley is in a confused panic. Much to everyone’s dismay, humanity seems to depend on Jack and his new teammates.

Can Hadley’s rawest recruits push past personal struggles and enormous doubts, develop their dormant powers, and stop the spreading evil?

And are they willing to commit to Hadley’s motto, “One Life for Many,” and make the ultimate sacrifice?

The Hadley Academy for the Improbably Gifted might be just the place for Jack after all.”

An Action-Packed Thriller For Young Adults:

Trust me! This book truly lives up to its description as an action-packed novel. The plot line is captivating, even riveting.

You’ll meet a group of kids who are whisked out of the world they know, to become trained fighters working to combat the “reapers,” a secret squad of killers. ,

The characters are very real and relatable. I found the dialogue entertaining and humorous, and the word descriptions are nothing short of fantastic.

This is a book for fans of the Hunger Games, the Chronicles of Narnia, Divergent, Maze Runner, and author Rick Riordan’s books.

If you enjoy stories, with multiple plot twists, masterful tension building, and battles of good over evil, you’ll love the Hadley Academy. This is a fast paced book, where the adventure does not wait, but starts early and never stops. I was left guessing until the very end, and enjoyed every twist and turn along the way of this story. 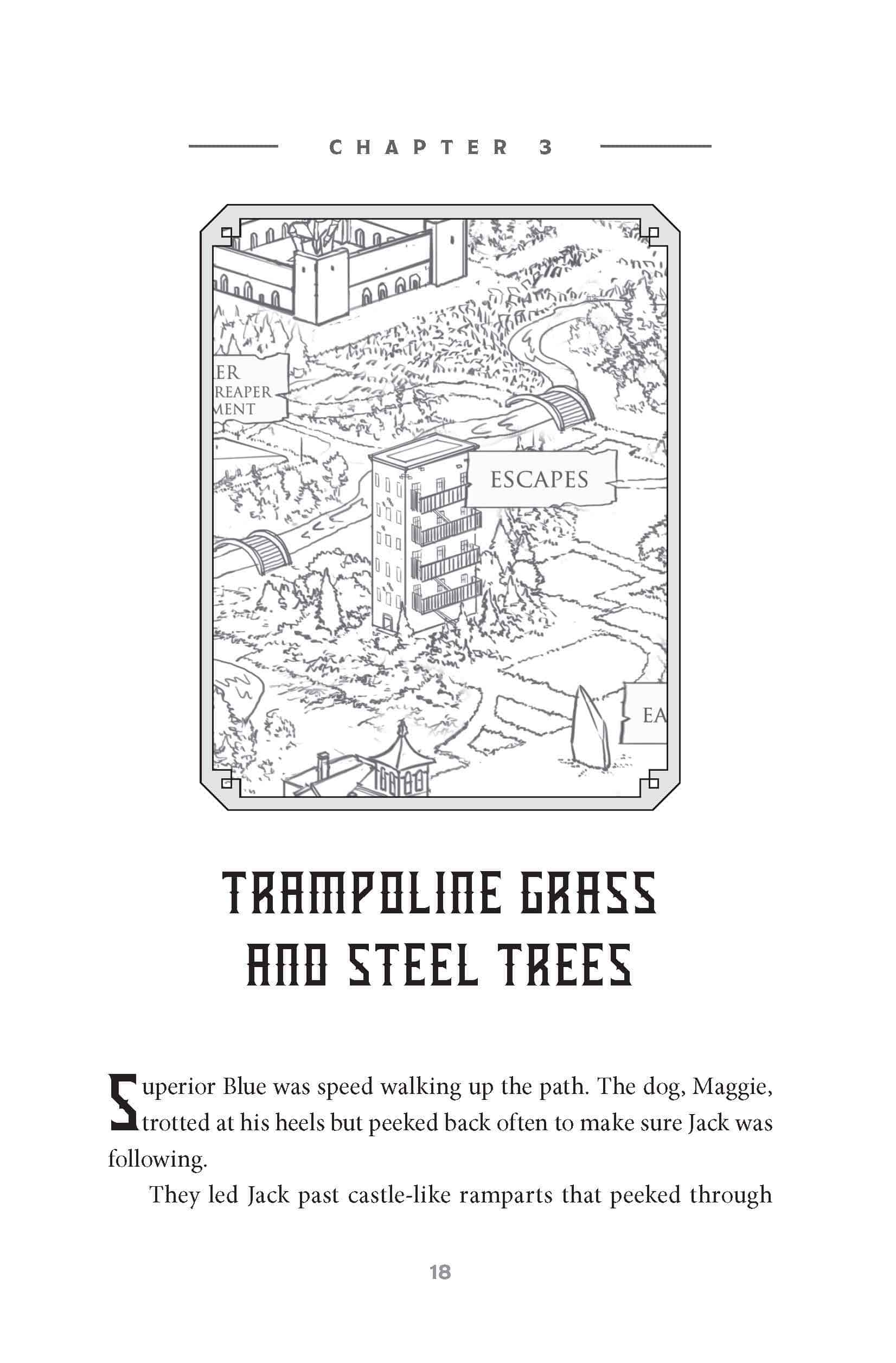 A cast of very different characters comes together to form the Thirteenth Team. As the story develops you realize the inter-connectedness of all the team members.

Each member was recruited for a reason, as they try to escape something from their past. But together they find a common cause, that delivers a magnificent dystopian fantasy novel for ages ten and up. And believe me, it’s for all ages. I am way beyond ten and I thoroughly enjoyed this book.

I loved the tension that built as I turned the pages, and believe me I frantically turned pages to get to the next big discovery in this storyline. There’s fun and scary parts, but just perfectly balanced so as not to frighten younger readers.

This young at heart reader is hoping there’ll be more books to follow. This story finished with a satisfying feeling of completion, but plenty opportunities and hints were created for more books to be written to complete a series.

Conor Grennan a notable Irish American. He holds dual US and Irish citizenship, and must be commended for his amazing charity work.

He is the founder of Next Generation Nepal (NGN), a nonprofit organization dedicated to reconnecting trafficked children with their families in Nepal. 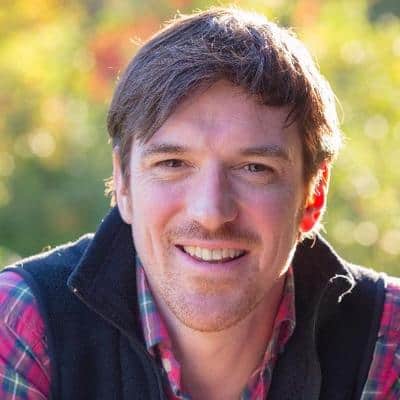 He is the author of the New York Times best-selling and #1 international best-selling memoir Little Princes: One Man’s Promise to Bring Home the Lost Children of Nepal.

When Conor was about to turn 30, he commenced a year-long trip around the world, with one of his first stops being to volunteer at the Little Princes Orphanage in war-torn Nepal.

Conor’s life changed forever, and his work has touched the lives of countless others. Conor discovered that many of the little princes at the orphanage were not really orphans at all. Many had been abducted from their homes and families by child traffickers.

Conor and his friend Farid committed themselves to these kids. They found a place for seven of these abducted children to stay before escaping Nepal, as revolution erupted in Kathmandu.

After arriving home, Conor received terrible news when he learned that the seven kids had disappeared, snatched once again by the same trafficker.

They returned to Kathmandu, riding through the chaotic streets on the back of a motorcycle, searching for these seven kids.

Conor and Farid pledged to start an entire new program dedicated to reuniting kids with their lost families in remote villages in the Nepalese hills. 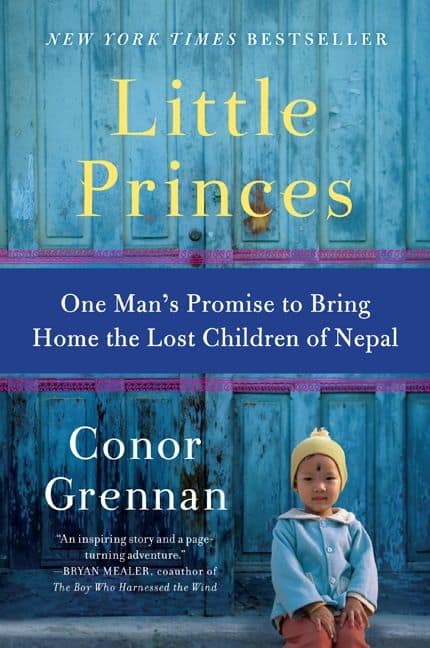 Conor’s organization, Next Generation Nepal, has reconnected over 500 families with children they feared were lost to them forever.

Grennan’s father is the Dublin-born, US-based academic and poet, Eamon Grennan. Writing is in Conor’s genes. His Irish family connection means he holds both Irish and US passports.

When traveling in Nepal, a dangerous war torn part of the world he once met with some Maoists. He whipped out his Irish passport, when he feared a US passport might not be as well received.

Little Princes has been shortlisted for the Dayton Literary Peace Prize, was the winner of the GoodReads 2011 Best Travel and Outdoors Award, and has been translated into 15 languages. Since NGN’s inception, the organization has helped reconnect more than 500 children with their families.

Prior to starting Next Generation Nepal, Grennan spent eight years at the East-West Institute, both in Prague and in Brussels, in the role of Deputy Director of the Program on Security and Governance, where his projects focused on peace and reconciliation in the Balkans.

Conor also serves as the Dean of Students for the MBA program at New York University’s Stern School of Business, where he is responsible for more than 2500 full-time and part-time MBA students.

For his work with the trafficked children of Nepal, Grennan was recognized by The Huffington Post as a 2011 Game Changer of the Year.

In 2014, he was also named a recipient of the Unsung Heroes of Compassion, which was awarded to him by His Holiness the Dalai Lama.

Grennan is a graduate of the University of Virginia and the NYU Stern School of Business. Currently he resides in New Canaan, Connecticut with his wife Liz and his two children, Finn and Lucy.

Where To Buy The Hadley Academy For the Improbably Gifted:

The Hadley Academy For The Improbably Gifted can be purchased directly from the publisher here.

You can also purchase it from Conor Grennan’s website and learn all about him an his amazing charity work here.

One lucky reader will win a copy of the book, The Hadley Academy For The Improbably Gifted by Conor Grennan.

To enter just leave a comment on this blog post by noon ET on Sunday, January 5th, 2020.

Any comment will do. What you write does not affect your chance of winning, but if you need inspiration why not tell us if you are a fan of young adult fantasy fiction.

A winning comment will be chosen randomly. Remember to leave your e-mail so that I can contact you should you win. Your e-mail won’t be published, just used to contact our lucky contestant for mailing of the prize.

The winner will be announced on Sunday, January 5th, 2020, at the bottom of this blog post.

Many thanks to everyone for stopping by to check out this book giveaway.

Feel free to share this little raffle with family and friends.

And many, many thanks to Conor Grennan and Thomas Nelson Publishers for sharing this entertaining, well-written book with us today.

Our lucky winner has been randomly chosen using the Pick Giveaway Winner Plug-in for WordPress.

I’ll send our winner an email to help coordinate mailing of her prize.

A big thank you to everyone for supporting this Irish American Mom giveaway by leaving comments and for checking out Conor’s wonderful work. And many thanks to Thomas Nelson Publishing for sharing this book with us.

Disclosure:  I received a free, advanced copy of this book for review purposes. This post reflects my honest and unbiased thoughts about this work, The Hadley Academy For The Improbably Gifte.

Reproduced by permission of the publisher Thomas Nelson Publishers, on behalf of Harper Collins Christian Publishing.