Historian Phillip Thomas Tucker explores the remarkable story of the Irish during the Texas Revolution in his new book, The Alamo’s Forgotten Defenders.

Dr. Tucker has thoroughly explored a hidden history long ignored by generations of historians. Relying upon a wealth of previously unexplored primary sources, The Alamo’s Forgotten Defenders is the first book devoted to the dramatic story of Irish achievements, contributions, and sacrifices in winning independence for Texas. In doing so, Tucker’s study bestows much-needed recognition upon the Irish and shatters a host of long-existing stereotypes and myths about the Texas Revolution. 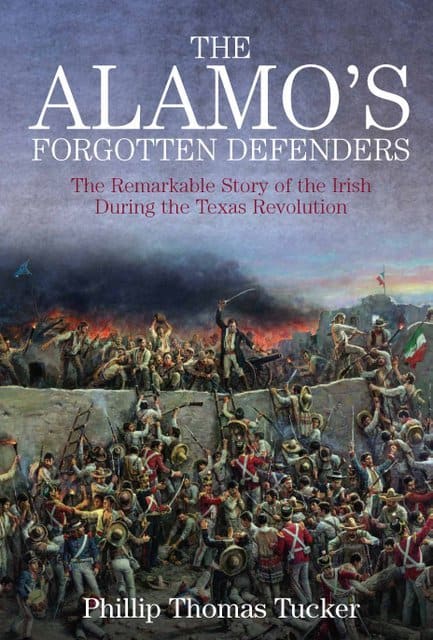 Note on the painting used on the front book cover:  The largest concentration of Mexican soldiers attacked the north wall of the Alamo on the morning of March 6, 1836. Artist Lajos Markos caught the drama and horror of the Mexican surprise attack in his fine painting. Courtesy of the State Preservation Board, Austin, Texas.

Today’s blog post is a treat for history enthusiasts, especially those who love Irish, American and Texas history.

I’m delighted to publish an interview with Phillip Thomas Tucker PhD., exploring his inspiration for this important research, and his desire to expand our understanding of the role the Irish and the Scotch-Irish played in achieving independence for Texas.

We also have a giveaway for two copies of this wonderful book. First let me share Mr. Tucker’s interview and then I’ll fill you in on how to enter the competition.

Question: Why did you decide to write your book on this topic?

PTT: When I realized the considerable void about the Irish in the historical record, not only in regard to their role with the Alamo but the entire Texas Revolution, I strongly felt the need to research the topic more deeply and to tell this important story of the Irish and their significant contributions.

Question:  You’re Irish. Did that influence you?

PTT: I supposed it did, yes. But there was a large gap in the historical record that needed to be filled.

Because of my strong background in Irish history on both sides of the Atlantic and my own Irish roots, it was only natural that I focused on the fascinating story of the Irish at the Alamo.

This focus on the Irish represents one of the few, but I think and hope, one of the best, remaining untold stories of the Alamo and the Texas Revolution.

Question: Why do you think historians have largely ignored this part of Texas and Irish history?

PTT: First and foremost, the story of the Alamo has been long dominated by romantic myths and outdated traditional views.

The struggle at the Alamo has been traditionally viewed as part of America’s westward expansion within the overall context of an Anglo-Saxon epic and a national Manifest Destiny.

Therefore, the traditional view has been that the Alamo’s defenders were a homogeneous garrison of Anglo-Saxons, when in fact, the majority of garrison members were of Celtic (Irish) heritage, and mostly Scotch-Irish.

Question: So the Alamo garrison can be properly described as an Anglo-Celtic one?

PTT: Yes. The Alamo garrison also included at least fifteen Ireland-born defenders. But a far larger number of garrison members were the sons, grandsons, and great-grandsons of Irish immigrants, both Catholic and Protestant.

Other Alamo defenders proudly pointed to their Irish immigrant ancestors going all the way back to the colonial period before the American Revolution. Ironically, many historians of the Alamo and the Texas Revolution are themselves of Irish heritage, but they seem not to have recognized the significance of Irish contributions to the winning of Texas Independence. 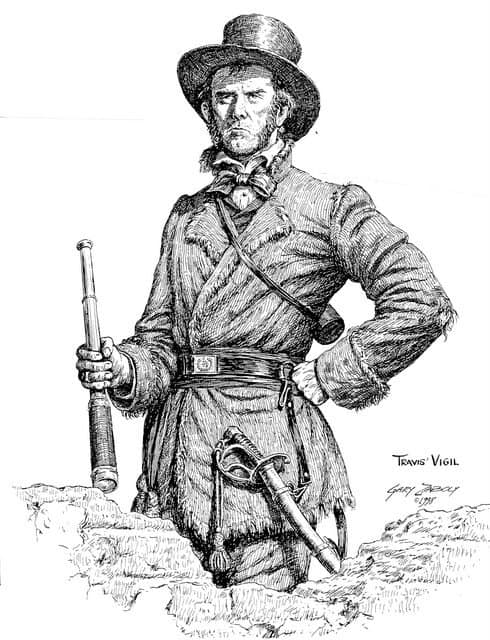 Image Note: Gary Zaboly’s “Travis’s Vigil.” Alamo commander Lt. Col. William Barret Travis, a former lawyer of partially Scotch-Irish descent, on his lonely nightly watch along the Alamo’s stone and adobe wall during the cold early morning hours of March 6, 1836. Near the beginning of the siege, Travis, a twenty-six-year-old South Carolinian, promised in an eloquent letter dated February 24, 1836, that he would “never surrender or retreat.” Travis kept his word—and perished. Courtesy of Gary Zaboly.

Question: Why do you think that is?

PTT: I think primarily because of a lack of existing information and documentation, and how difficult it is to root out this part of the story.

Question:  What was difficult about writing this book?

PTT: The years collecting the research and writing the book based upon decades of studying the Irish experience on both sides of the Atlantic.

Question:  Were you able to find unexplored primary sources?

PTT: Writing about the forgotten Irish contributions to the Alamo and the Texas Revolution called for digging deeper into primary source material and the overall historical record.

Period newspapers in Texas, Mexico, and across America proved invaluable in providing good primary source information. Fortunately, my decades of study (including in Ireland itself) in the fields of Irish history and culture provided a solid foundation from which to embark upon this worthy project, coinciding with my lifelong love of Texas history.

Question: Why did the Irish fight for Texas independence?

PTT: The Irish were motivated primarily by their longtime desire for liberty (long denied to them by the English in their home country), the dream of becoming equal citizens of a new, independent republic, and the acquisition of abundant amounts of Texas land.

The legacy of the Irish people battling for independence against a centralized government (England) for centuries played a forgotten role in inspiring the Irish in Texas to break away from the centralized government of Mexico in an armed revolt against a more powerful opponent. And, of course, the autocratic Mexican military strongman and dictator, General Santa Anna, reminded them of centuries of abusive English domination and rule in Ireland. 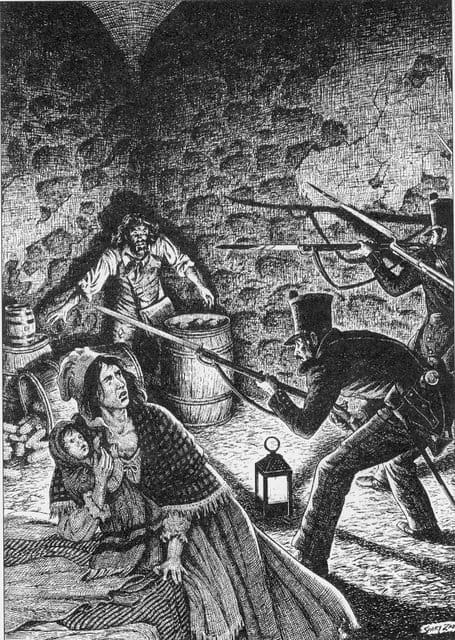 Image Note: The final desperate moments of Tennessee-born Jacob A. Walker, as portrayed by artist Gary Zaboly. Walker was a faithful volunteer fighting with Capt. William Ridgeway Carey’s artillery company (“The Invincibles”). Walker was trapped inside the stone church when the Mexicans burst through its wooden doors during the final phase of the battle. The Nacogdoches, Texas, native and father of four was bayoneted to death. Courtesy of Gary Zaboly.

Question: What happened to the Irish after the Texas victory?

PTT: They gradually merged into the mainstream of Texas and American life, becoming Texans and Americans. However, these developments were a major factor that also led to the loss of an appreciation of Irish heritage and culture.

Therefore, a distinct Irish identity in Texas faded away. But what was lost most of all was the memory of significant Irish contributions to the Texas Revolution. And to this day, many people across Texas (including historians) are not fully aware of the importance of the Irish contributions to the making of Texas and how the Texas Revolution was very much of an Irish story on many levels.

Question: Why do you think that it is important to tell this story? How does it stand as a corrective?

PTT: The Irish were the most overlooked and forgotten players in the story of the Alamo and the Texas Revolution.

This is a striking paradox because the contributions of the Irish were so important and disproportionate for the winning of Texas Independence.

My hope is that readers find this book a timely and much-needed contribution to the distinguished annals of Texas history.

Question:  What were some of the contributions of the Irish?

PTT: Their contributions were on every level and virtually endless, including in regard to the issuing of the first Texas Declaration of Independence of the Texas Revolution at Goliad, Texas, in December 1835.

Without the significant Irish and Scotch-Irish contributions in so many ways, I believe the Texan revolutionaries would have lost their war for independence, and Texas would have not become an independent republic—at least when it did.

Question: Did any individual fighter’s story stand out to you?

PTT: Perhaps the life of David Crockett best represents the overall Irish experience because his family migrated from Ireland, and he became a national figure and is most associated with the Alamo. Despite Crockett’s widespread fame and focus on him as a historical figure, no aspect of his life has been more forgotten, unappreciated, and consistently overlooked by historians and Americans than his Irish heritage.

Like the Irish in Texas, Crockett became Americanized in a process that obscured the depth of his Irish roots and heritage. He has been long presented as an authentic American hero, but one without a strong Irish connection.

Any comment will do. What you write does not affect your chance of winning, but if you need inspiration why not tell us if you are interested in Irish and Irish American history.

Two winning comments will be chosen randomly.  Remember to leave your e-mail so that I can contact you should you win. Your e-mail won’t be published, just used to contact our lucky contestants for mailing of the prize.

The winner will be announced on Wednesday November 2nd, 2016, at the bottom of this blog post.

Thanks to everyone who supports this little giveaway by leaving a comment.

And thank you to Phillip Thomas Tucker for sharing his insights with us today. Wishing them every success with this book and I hope he finds other interesting stories about the Irish in America to explore in the future.

I’ll send our winners a quick e-mail to let them know about their Irish luck.

Thanks to everyone who joined in and entered this little Irish American Mom giveaway. Wishing Dr. Tucker every success with his research into Irish American history.

And don’t forget you can explore more immigrant tales of the Irish in America through tales of our ancestors and stories from the present, right here on my blog.

Share my recipes and ramblings with the world
« Introducing Irish Author Jean Grainger
How To Discover The Princes, Paupers And Horse Thieves In Your Family History »