What does it mean to be Irish? That, my dear readers, is the question I pose today.

Answers may be many and most may be difficult to pinpoint.

Around this corner of the internet it is always good to explore our Irishness together, as we celebrate our shared heritage..

And so let's delve in together, with a little foray into our Irishness by continuing my series of blog posts all about the Irish Psyche. 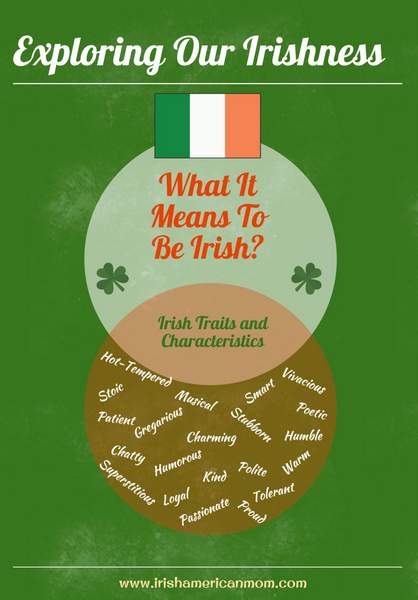 Perhaps uncovering the meaning of our Irishness is too great a task for any blogger to undertake, and it's definitely a question that has no neat and tidy answer.

But you know me!!!! .... I never shirk away from a difficult topic, and will not let my lack of psychological training deter me from going where no man has gone before.... not even Freud .... deep inside the Irish psyche.

So be forewarned.... this is no scientifically researched thesis on what it means to be Irish. This little rambling is based solely upon my experiences as an Irish woman, plowing through the University of Life.

We know that we "Irish" are a complicated bunch, and trying to amalgamate our traits into easily identifiable, shared quirks and idiosyncrasies is probably a lunatic's endeavor. But I am a Crazy Celt after all....

So together let's delve into the forty shades of green that meld together creating our Irish identity.

Whatsoever we personally believe it means to be Irish, there is one undeniable fact ....

We Irish are deeply proud of being Irish.

How many of us have seen our friends and loved ones wearing T-shirts adorned with the words ????

"Proud To Be Irish"

And a few of us have worn said T-shirts ourselves. But what exactly are we so proud of, that we feel compelled to let the world know of our Irish pride through the very clothes we wear?

Domhnall Gleeson, an Irish actor, has reflected upon his Irish pride, but has also acknowledged that he does not understand what it really means to be Irish.

"I'm hugely proud of being Irish.

And I don't even know what that means.

I just know that it's true."

I'm not sure I really know what my Irishness means to me. I have always believed "I was born in Ireland, therefore I am Irish."

But is being "Irish" something more than a birthright?

Here's what the actor, Colin Farrell, has shared on this topic....

"Being Irish is very much part of who I am.

I take it everywhere with me."

And so let's try to discover together what exactly it is we are proud of, when we say we are "Proud to be Irish." 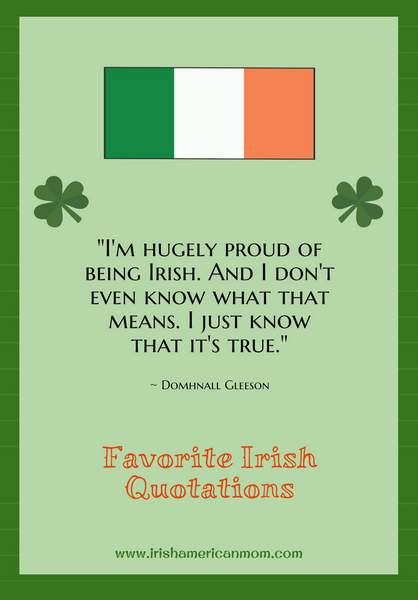 Now Brendan Behan may have been a little harsh when he said ...

"Most people have a nationality,

but the Irish and the Jews have a psychosis."

But if you consider his words closely, you realize Behan may have been onto something. Both the Irish and the Jewish people are ancient races, who have traveled the far reaches of the world, but who have not always been welcomed wherever they roamed.

Through the ages, both peoples have remained connected with their kin and with their ancient homelands. They have proudly maintained those ties, because they are innately proud of their national identity, albeit a psychosis.

The Irish and Jewish people are survivors, strong-willed and determined.

The writer, Edna O'Brien, summed this up beautifully about the Irish when she said ...

“When anyone asks me about the Irish character,

Another Irish writer, Anne Enright, also identified the psychotic nature of our Irishness, and our acceptance of out-of-the ordinary behavior ....

“'Up and down' is Irish for anything at all

from crying into the dishes to full-blown psychosis.

Though, now that I think about it,

a psychotic is more usually 'not quite herself'.”

And so it appears this Irishness is intertwined with a sense of tragedy ...

“There's no sense to being Irish

unless you know the world's going to break your heart.”

~ Attributed to both Daniel Patrick Moynihan and Thomas Adcock

But despite tragedy and sadness we love music, laughter and fun...

“For you can't hear Irish tunes without knowing you're Irish,

and wanting to pound that fact into the floor.”

Have you ever found yourself tapping along to an Irish tune, or pounding the floor boards in a tribal dance as if declaring your Irishness to the world? And so I ask, what does being Irish mean to you?

My Personal Sense of Irishness:

My sense of Irishness is embedded in memories of my childhood, growing up in Dublin in the 1960's and '70's, with deep connections to an older Ireland, which I experienced when visiting my family in County Cork.

I am intensely proud of Ireland, of its unique culture, its rich history, and its people who live all over the world.

I love this description of 'Irishness' ....

"Irishness is not primarily a question of birth, blood or language;

it is the condition of being involved in the Irish situation,

and usually being mauled by it."

I know my Irishness is an innate sense of identity, I carry with me wherever I may roam. It's an identity I wish to retain with pride, even though we all now live in a rapidly changing world.

Discovering The Meaning Of Our Irishness:

On this blog we don't shy away from exploring the deep and complex topic of what it means to be Irish.

We have dipped our big toes into the great wide ocean of answers out there, but as time progresses, we'll hopefully swim a little deeper into this sea of Irishness.

To follow along you can check out my subcategory "The Irish Psyche." All new blog posts on this topic will be filed right there.

Why not join me on this journey of discovery? Stop by whenever you can, as we uncover our Irishness together.