Oliver Goldsmith is an Anglo-Irish poet, novelist and playright, whose literary works are studied throughout the world. The son of an Anglican clergyman, he spent his childhood in Ireland.

Born in Ireland around 1728, the exact location and year of his birth is disputed.

He was either born at Smith-Hill House, Elphin, County Roscommon or he was born in County Westmeath or  County Longford in Ireland.

His father,  was the Anglican curate in Kilkenny West in County Westmeath beside the border with County Longford. His childhood was spent on a picturesque farm near the village of Lissoy.

It is said that this little Irish village was the poet's inspiration for the village of Auburn in his famous poem "The Deserted Village."

When looking up a map, only the townland of Lissoy is found today, not an actual village. 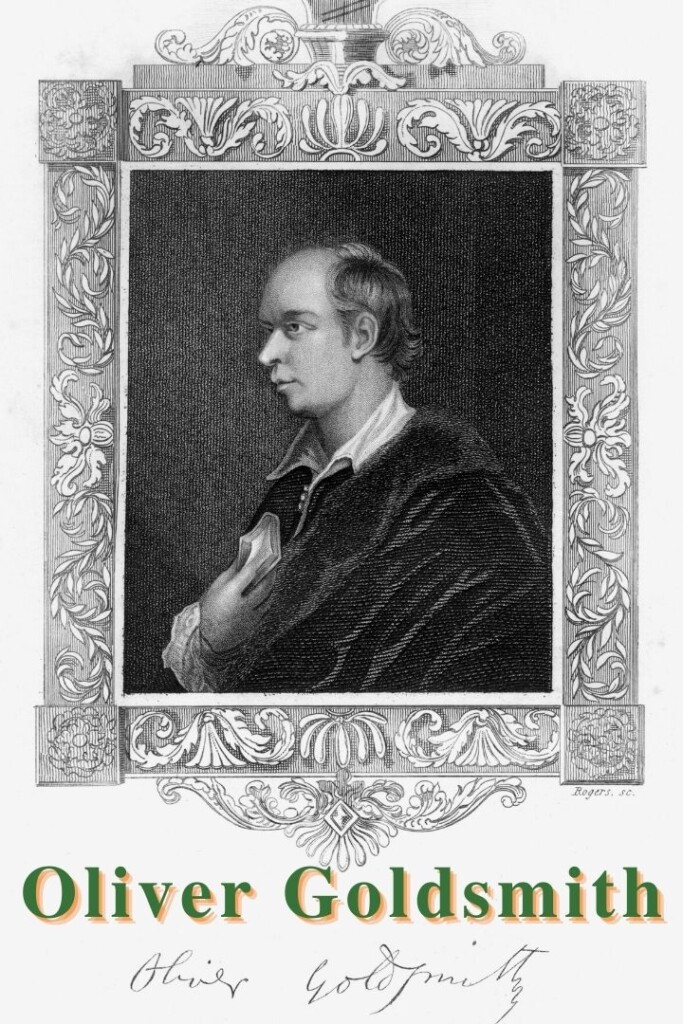 Oliver is said to have been uncoordinated and clumsy. His school master, Thomas Byrne, at the local village school provided inspiration and influenced the young boy.

He encouraged the young Goldsmith to try his hand at writing poetry. Oliver also enjoyed watching traveling entertainers who often visited the area where he lived.

The young boy loved life in this little rural Irish village and explored the countryside surrounding his childhood home.

The young Oliver came down with a bad dose of small pox when he was around 9 years old. Unfortunately his face was left badly blemished for life.

Education in Ireland and Scotland

Oliver continued his education at the diocesan school at Elphin, County Roscommon . Next he moved to a school in Athlone, before returning to County Longford to attend a school in Edgeworthstown.

There he studied Latin before attending Trinity College Dublin to study theology and law.

When Trinity College was founded in 1592 it was only open to students who were members of the Protestant faith. No Irish Catholics were allowed to attend until 1793. However, the Catholic Church banned its members from attending without a special dispensation until 1970.

It is said that he did not have a large social circle of friends at university, because of his rural, crude ways and awkwardness. He did not quite meet the standards of genteel Dublin society at that time.

He was not a good student, and spent much of his time in Dublin drinking and gambling (and carousing to use a word my Granny loved.) Despite his lack of academic success, Trinity College erected a statue in his honor in the 19th century.

After graduating from Trinity in 1749 Goldsmith found it difficult to find work. He graduated at the bottom of his class, and received no offer of a post with any of Dublin's legal firms. His grades were so poor the Church was no longer a career option.

His relatives paid for him to attend medical school in Edinburgh between 1752 and 1755. Although he sometimes used the title of doctor, it is believed that he never fully graduated as a physician.

Goldsmith undertook a walking tour of Europe, earning his keep as a wandering minstrel playing the flute. 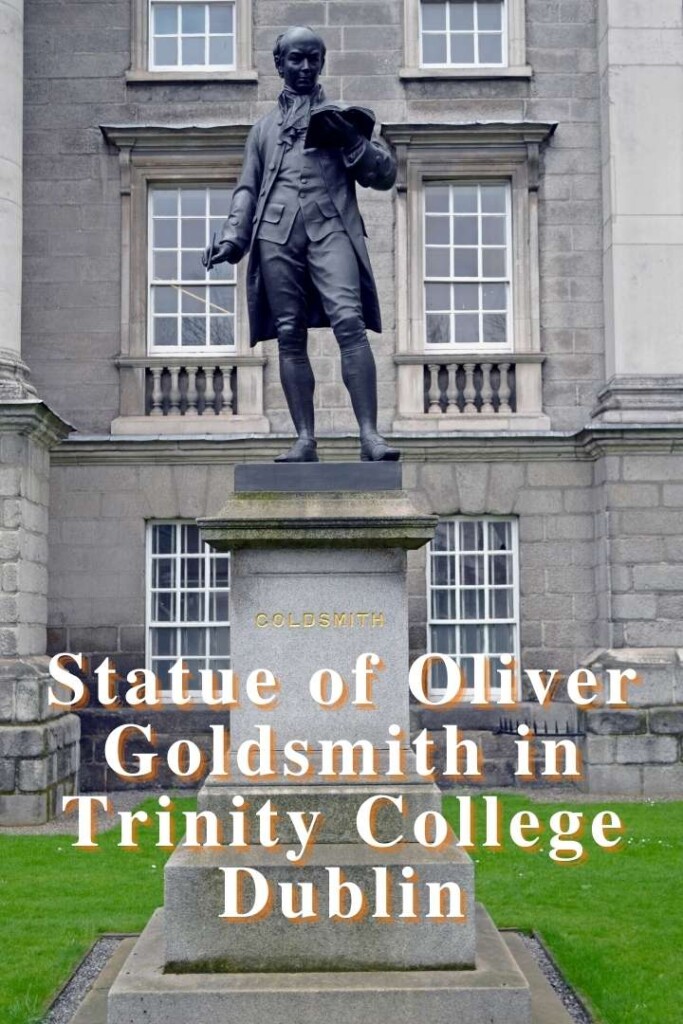 Goldsmith returned to London in 1756, where his fortunes turned. There, the book market was expanding rapidly with a growing middle class, eager to buy books and pamphlets.

Goldsmith started writing essays and prose on many different topics, with many of his writings being published by The Public Ledger. His reputation as an independent thinker spread, and demand for his writings rose.

He was one of the founding members of a literary group in London, known as 'The Club.' This group met on a weekly basis to share ideas and discuss their writings. 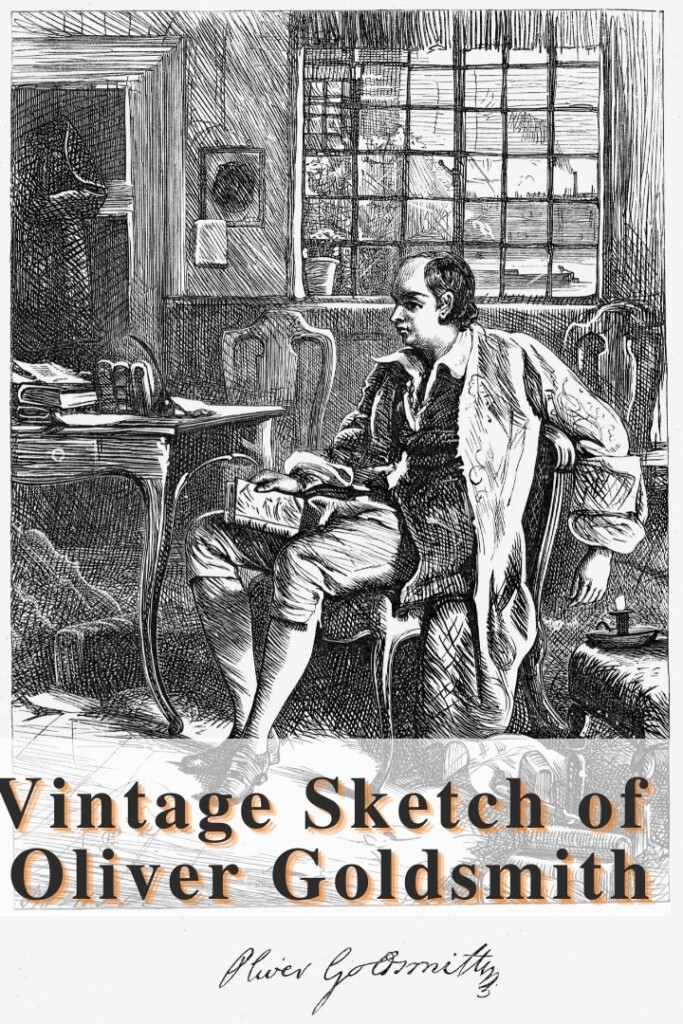 Once again, Goldsmith's social and conversational skills were somewhat lacking. Another member of the club, Samuel Johnson, wrote of Goldsmith:

"No man was more foolish than when he had not a pen in his hand, or more wise when he had."

Most Famous Works of Oliver Goldsmith

Goldsmith is most famous for writing two long poems.

The Traveler is a philosphical poem and social commentary, which discusses the causes of contentment and discontent in nations. Here is a verse....

From art more various are the blessings sent,—
Wealth, commerce, honour, liberty, content.
Yet these each other's power so strong contest,
That either seems destructive of the rest.
Where wealth and freedom reign, contentment fails,
And honour sinks where commerce long prevails.

His other most famous poem is called 'The Deserted Village.' The Irish village of his childhood is said to have been his inpiration.

The poem recounts how immigration affected a small rural village. In these verses, Goldmith describes the decline of a village and the emigration of many of its residents to America.

Here is an excerpt...

"The man of wealth and pride
Takes up a space that many poor supplied;
Space for his lake, his park's extended bounds,
Space for his horses, equipage, and hounds:
The robe that wraps his limbs in silken sloth
Has robbed the neighbouring fields of half their growth"

Goldsmith diapproved of the excesses of the rich and wealthy aristocracy of England and Ireland.

His other most notable works include a novel 'The Vicar of Wakefield,' and two plays called 'The Good Natured Man' and 'She Stoops to Conquer."

Here are some of my favorite quotations from Oliver Goldsmith. This first selection focuses upon his views about love and marriage, and the power of friendship.

"Friendship is a disinterested commerce between equals;

love, an abject intercourse between tyrants and slaves."

"Pity and friendship are two passions incompatible with each other."

"Tenderness is a virtue."

and describe a happiness that humans never taste.

How deceptive and destructive are those pictures of consummate bliss!" 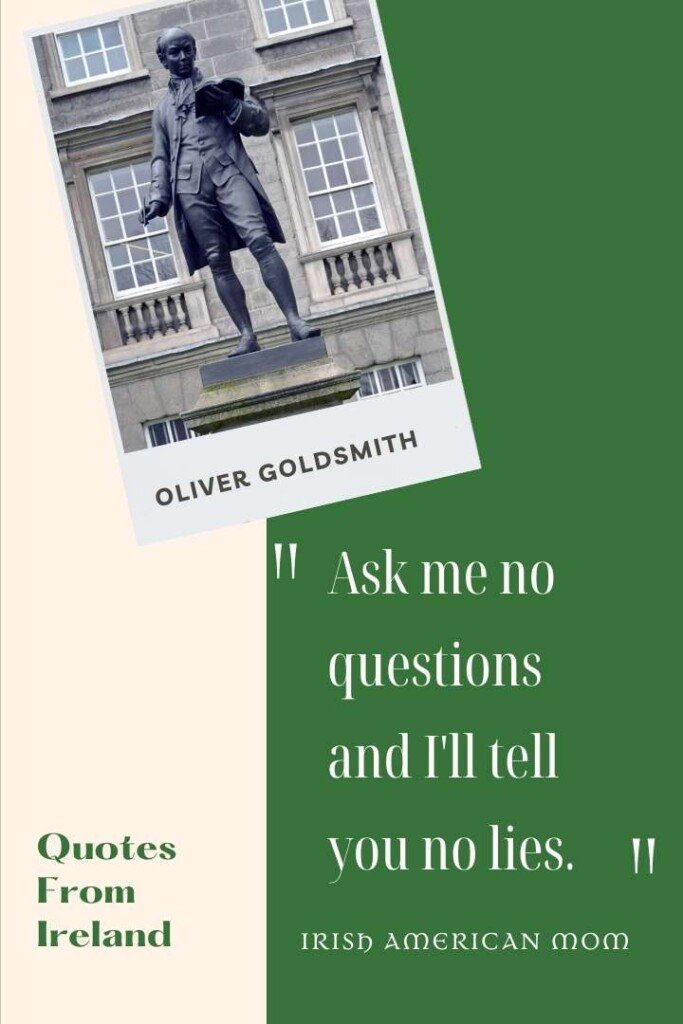 "The best way to make your audience laugh is to start laughing yourself."

"Success consists of getting up just one more time than you fall."

"Life is a journey that must be traveled no matter how bad the roads and accommodations."

"Write how you want, the critic shall show the world you could have written better."

"Ask me no questions and I'll tell you no lies."

"The jests of the rich are ever successful."

"Every absurdity has a champion to defend it."

"Law grinds the poor, and rich men rule the law." 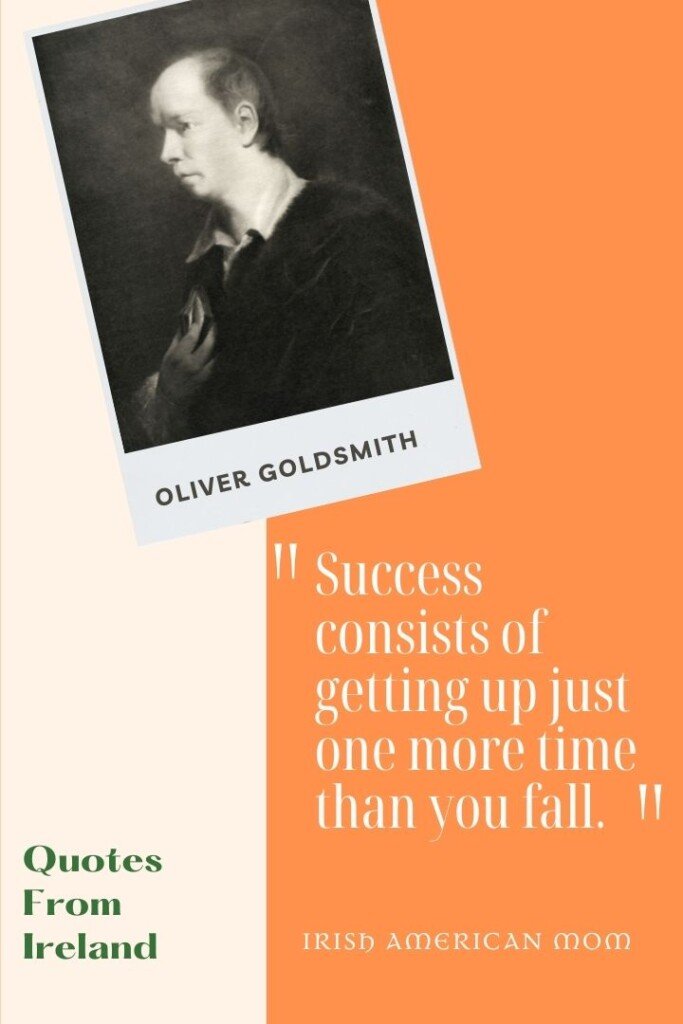 Thank you for reading and learning about Oliver Goldsmith, an Irish born poet, as we discover who's who in Irish literatre.