Ireland is a country of many names. For such a small island it bears an incredibly wide and varied array of titles, from the Ould Sod to the Emerald Isle, the Land of Saints and Scholars to Inishfail, and from Hibernia to Scotia, to name but a few.

Yes! Believe it or not, Scotia is not only an ancient name for Scotland but was also used to refer to Ireland.

It also turns out the Celts were not the only ones to add their two cents worth when naming this island on the edge of Europe.

From the Greeks to the Romans people from far and wide have had their say when naming the island of Ireland.

And so today, let’s explore the many names for Ireland. 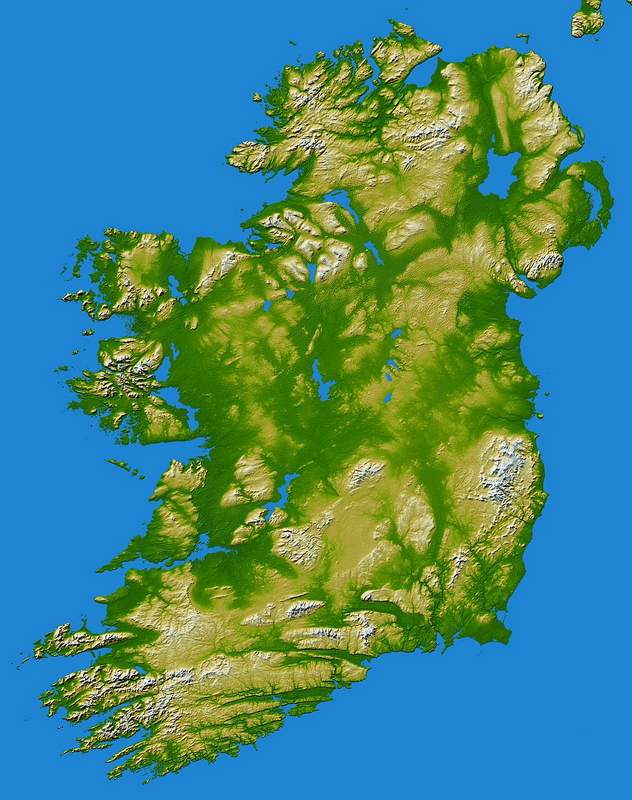 Today, the country of my birth is officially known as Ireland.

When the state was created in 1922 and Ireland no longer was part of the United Kingdom, the name given to the twenty-six counties freed from English rule, was the Irish Free State. 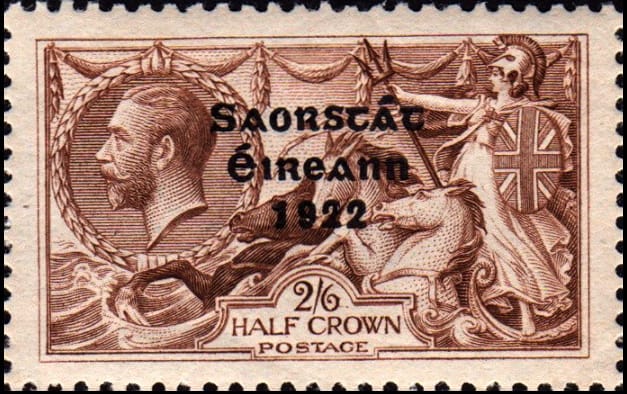 The stamp pictured above is one from 1922 and it bears the title “Saorstát Éireann” (pronounced Sayre-staw-tch Air-ann) which in the Irish language means the Irish Free State.

For all the grammar buffs out there, Éireann is the genetive or possessive case of Éire.

In 1937 the Irish government adopted a new constitution claiming the whole island as its territory and the state’s name officially became Ireland in the English language and Éire in the Irish language. You may not be surprised to learn that this name has roots in old Irish mythology.

Way back when, at the time when Ireland was ruled by faeries and druids, three sister goddesses ruled the roost around this little green island we all love. Each of these magical, mystical queens thought it would be wonderful to have the whole island named after her.

And of course, they couldn’t negotiate who most deserved this amazing honor, so they turned to the Bard of Armagh to help them make the decision. 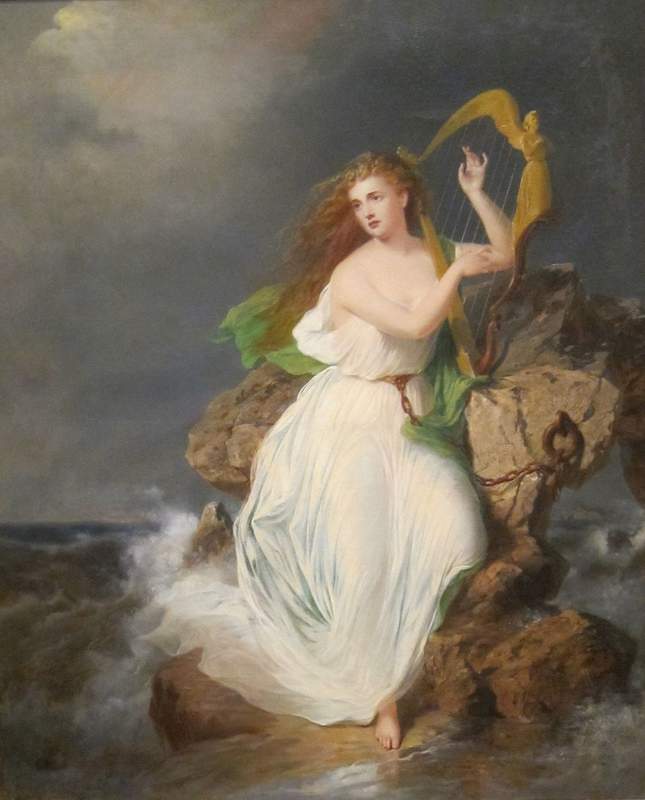 The Harp of Erin – painting by Thomas Buchanan

It was Éiriú who won the honor, but to keep the other two happy the wise old bard decided that Fola would refer to literary Ireland, and Banba would be associated with poetic Ireland.

But as we well know, it was their sister’s name, that came to be the official name of the island.

Sometimes the name of our Celtic goddess is spelt Éirinn, which is well known from the popular saying:

This quite literally means, Ireland forever, and is a very popular phrase used throughout Ireland and America, especially around St. Patrick’s Day. 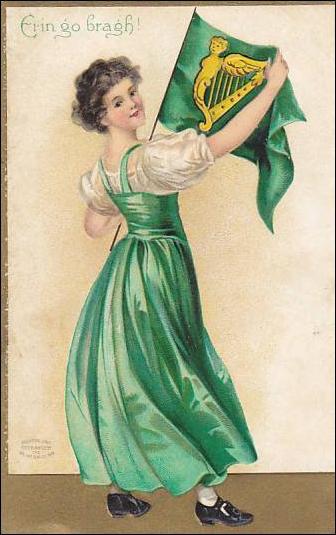 Erin is also one of the most popular names for Irish American girls.

Éirinn is originally a locative or dative form of the noun Éire, but it has been adopted as the normal name for Ireland in the Irish language by most native Irish speakers, although dictionaries still refer to the politically accepted form, Éire.

And so, either Éirinn or Éire is acceptable as the Irish language translation of Ireland, but Éireann is always the possessive case.

And there you have it – my explanation for the differences between Éire, Éirinn, and Éireann – clear as mud.

In 1949 the Irish state became a republic and the term Republic of Ireland was first adopted to refer to the 26 counties in the south.

In the 1937 constitution the state was renamed Ireland. 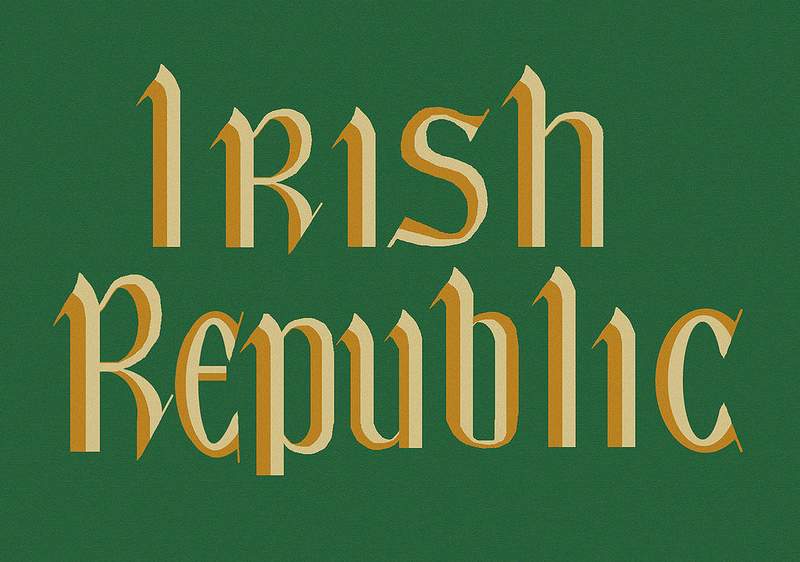 Southern Ireland was established by the British under the Government of Ireland Act, introduced on the 3rd of May 1921. It covered the 26 counties currently in the Republic of Ireland. It never truly functioned as a political entity because of the Irish War of Independence. In 1922 it was replaced by the Irish Free State.

Now as we know from Homer’s Odyssey and the ancient cartographer Ptolemy, the Greeks loved to travel. When recounting tales of their journeys they came up with new names for the green island far away at the edge of their world.

The names Iournia, or Ivernia were coined by the Greeks and these are thought to have derived from descriptions of the island as a fertile country.

Iverni, is a term the Greeks used to name a people who lived in Ireland. Ptolemy used the term Iverni to name the people of south western Ireland, and the term came to apply to the good folks who called Munster home. The Ring of Kerry encompasses the Iveragh penisnula on the western coast of Munster.

Ierne is another form of Ivernia used by the Greeks. In Greek mythology the Argonauts traveled past the Island Iernis, and this is believed to refer to our beloved Ireland. This first known reference to the whole island of Ireland under the name Iernis dates back over 3000 years.

In Homer’s Odyssey, Ogygia is an island home to the nymph Calypso, the daughter of the Titan Atlas or Atlantis. Now some believe the lost city of Atlantic lies off the Irish coast and that Ogygia may refer to Ireland.

In 1685 Roderick O’Flaherty wrote his book Ogygia: A Chronological Account of Irish Events, attributing Homer’s Ogygia to the island of Ireland.

Roman or Latin Names For Ireland:

Now if the Greeks were going to get in on the act of naming Ireland, then the Romans weren’t going to be left behind. The Romans never conquered Ireland, but they were well aware of our existence. 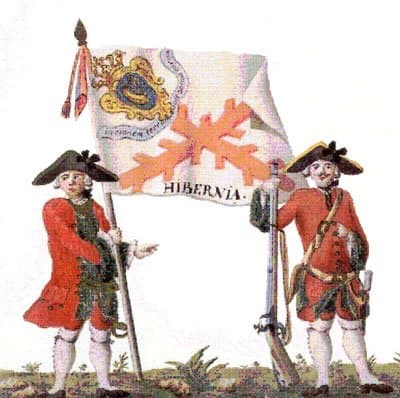 Hibernia Regiment Flag of the British Army in 1750

The name they christened this little island, lying just outside their Empire, was Hibernia. The word hibernate derives from the same Latin origin, and means wintry. It is believed the Romans decided not to invade this damp, wet, and cold country. They didn’t fancy dealing with winter chilblains.

Those who are poetically inclined have a very soft spot for the term Hibernia.

And there is a soccer team called Hibernia that still plays in the Scottish football league.

Other Latin names used for Ireland include Insula Nemorosa  signifying a woody island, which in Irish or Gaelic is Fiodh-Inis (pronounced fee-uck in-ish). Ireland was a land of trees in the time of Saint Patrick. 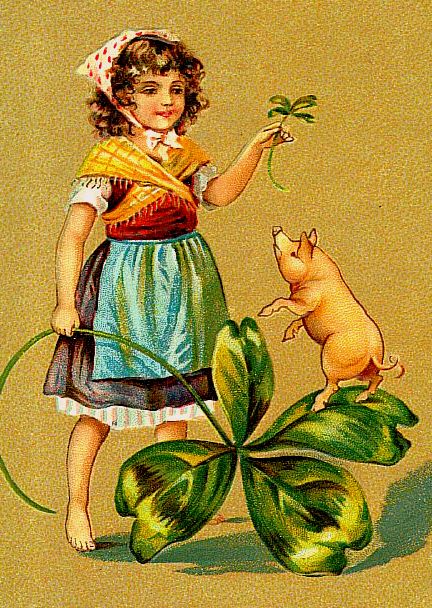 Muicinis was a name given to Ireland by the children of Míleadh who are said to have come from Spain and eventually settled in Ireland.

Before they finally arrived here for good, they ventured very close to the island along the coast of County Wexford. The Tuatha Dé Danann saw them coming and used their mystical powers to make the island invisible.

The Milesians looked at Ireland and saw a pig. The Gaelic or Irish word for pig is muc, and so the sons of Mil named Ireland, Muicinis (pronounced mick-in-ish), or the island of the pig.

After settling in Ireland the Sons of Míleadh decided their new home was not a pig after all, and named their beloved island after their mother Scota. She was the daughter of Pharaoh Nectonibus, and she hailed from the Scottish race  from Scythia.

The term Scots was applied to the people of Ireland right up until the Middle Ages, and their home was called Scotia. The Romans had to deal with Irish raiders when they ruled most of Europe and they called these Celtic nuisances Scotii. This name may derive from a Latin word meaning dark or misty. 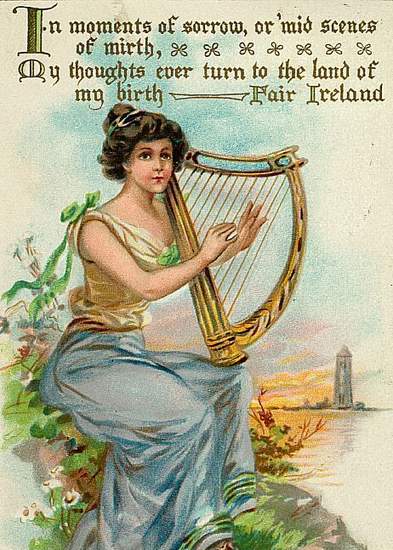 Even Saint Patrick called the Irish ‘Scoti’ in the 5th century and it came to refer to all people of Gaelic origin including those living in modern day Scotland.

Around the 11th century the countries of Scotland and Ireland started to be differentiated, with our highland cousins being linked with the term Scotii more frequently than the Irish.

Inis Fáil is an old Celtic name for Ireland and is pronounced in-ish fawl. It is believed the Tuatha Dé Danann originally named Ireland so. It means Island of Destiny. 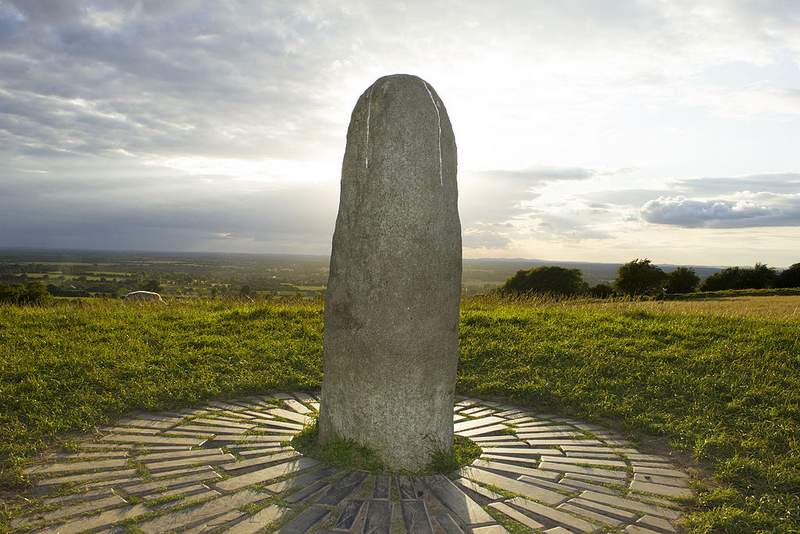 These magical settlers of Ireland brought a mystical stone to the island called the Lia Fáil (pronounced lee-ah fawl) or the Stone of Destiny. This pillar stood at Tara and when a king was to be chosen to rule over the people, the candidates touched the stone.

Under the  touch of the rightful king it was said the stone would make a roaring sound.

Inis Ealga (pronounced inn-ish al-gah) is another Irish term and it means the noble or excellent island. This is translated into Latin as Insula Nobilis.

Other Latin writers in the first milennium referred to Ireland as Insula Sanctorum or the Island of Saints. 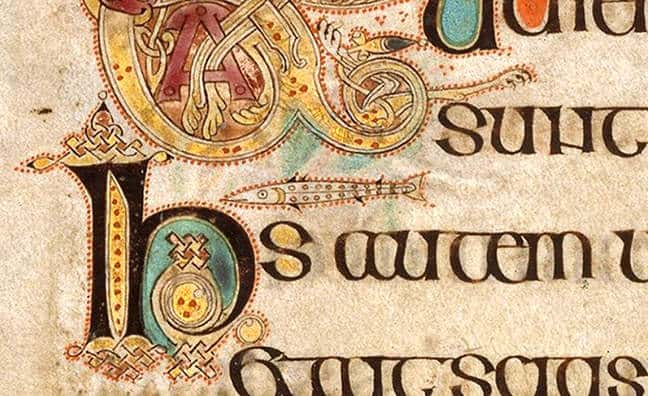 Excerpt from The Book of Kells

Others preferred the title Insula Doctorum or the Island of the Learned.

In modern times these two titles have been combined into the poetic description of this land as the Island of Saints and Scholars.

People refer to their country of origin as either the fatherland or motherland. Ireland is always female, and when returning back to Ireland, Irish Americans always say they are returning to the motherland.

Ireland’s identification as a woman is personified in other female names for the island. These include names such as My Dark Rosaleen or Roisin Dubh, Cathleen Ni Houlihan, Mother Eire and the Sean Bhean Bhocht (pronounced shan van vuckt) which means the poor old woman.

The Black Rose was a code name for Ireland back in the 16th Century, and as a result the rose is now a little known symbol of Ireland.

These female personas for Ireland create a romantic vision of the country. When Ireland was ruled by Britain this female representation became a hallmark of nationalism. Poor old Mother Ireland was desperately in need of protection and for her brave sons to rise up to intervene on her behalf. 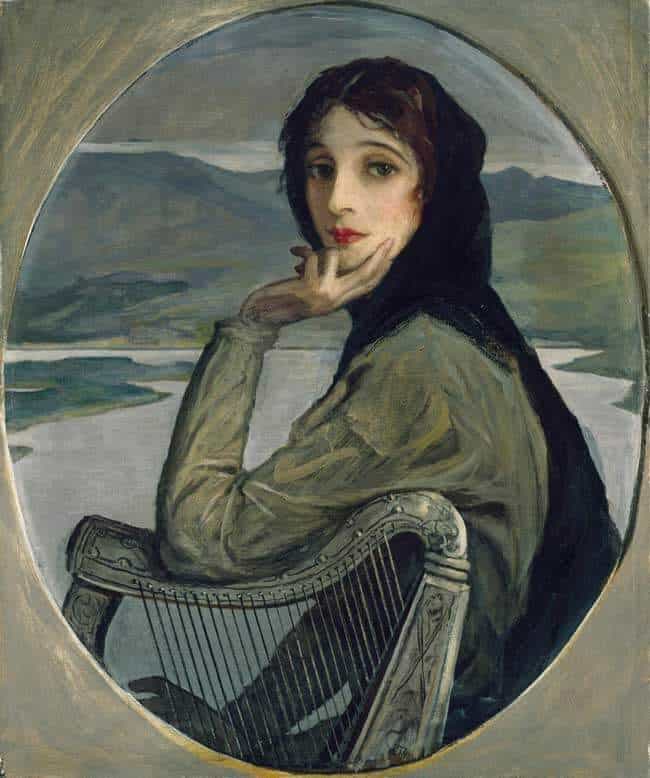 The Emerald Isle is a tribute to the green fields of Ireland and their forty shades of green, made famous by Johnny Cash. 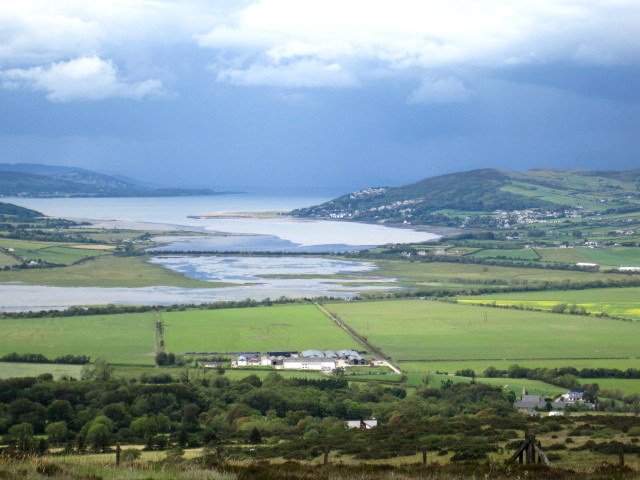 And the Ould Sod or Auld Sod is a reference to Ireland as a homeland, a country of origin.

And so, before we finish let’s recap all the names for Ireland we reviewed in this post. Here’s a quick reference list:

Inis Fáil or Island of Destiny

Insula Sanctorum or the Island of Saints

Insula Doctorum or the Island of the Learned

Land of Saints and Scholars 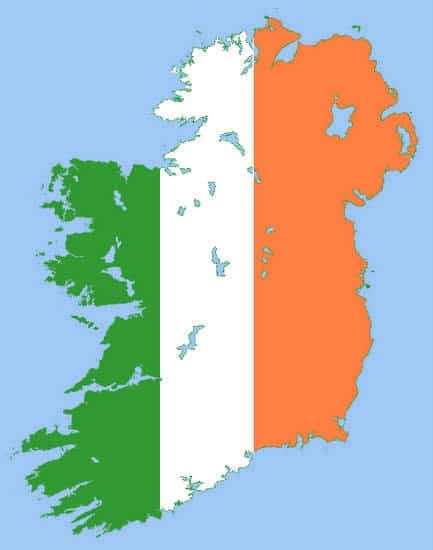 And if you know of any other name I omitted, please do let us know in the comments section.

Thanks for stopping by to delve into a little Irish history.

Here are some more recipes and ramblings you may enjoy …… 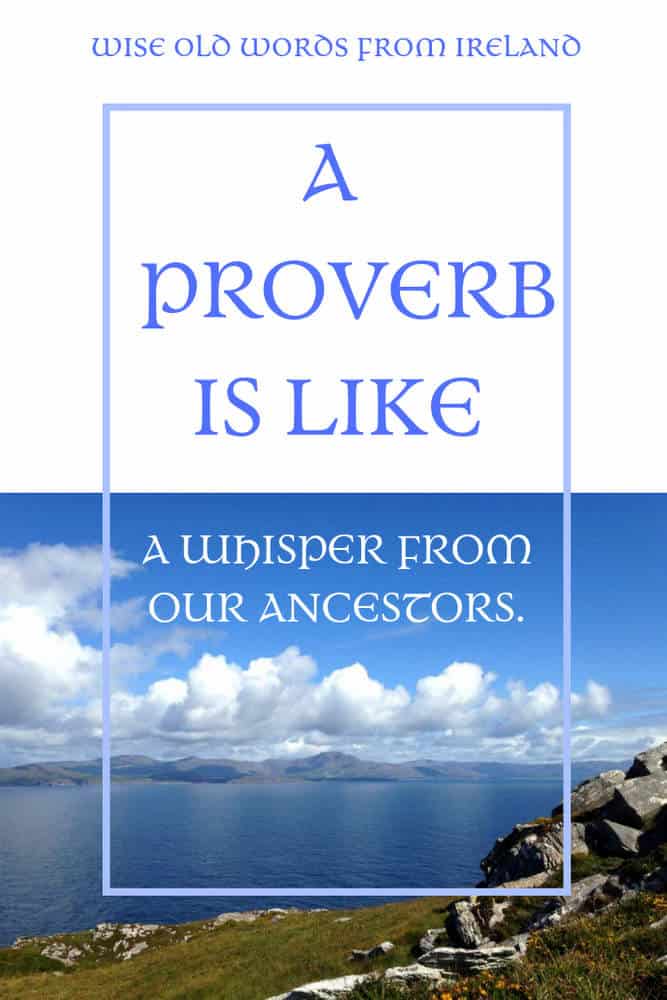