Ireland has a rich and long history, recorded through an oral and written tradition, that dates back for millenia. Historically, the provinces of Ireland were Ulster, Connacht, Leinster, Munster and Meath. Today there are only four provinces remaining.

Ireland's provinces were subdivided into counties by King John of England, and today each county and province boasts a distinct cultural heritage and character. The exact boundaries of the 32 counties were defined and redefined over the centuries, until the Tudor conquest of Ireland.

In modern times you'll only find four provinces in Ireland, but their historical importance as part of Irish cultural heritage remains strong. In this article we will look at these provinces and delve into a little history. 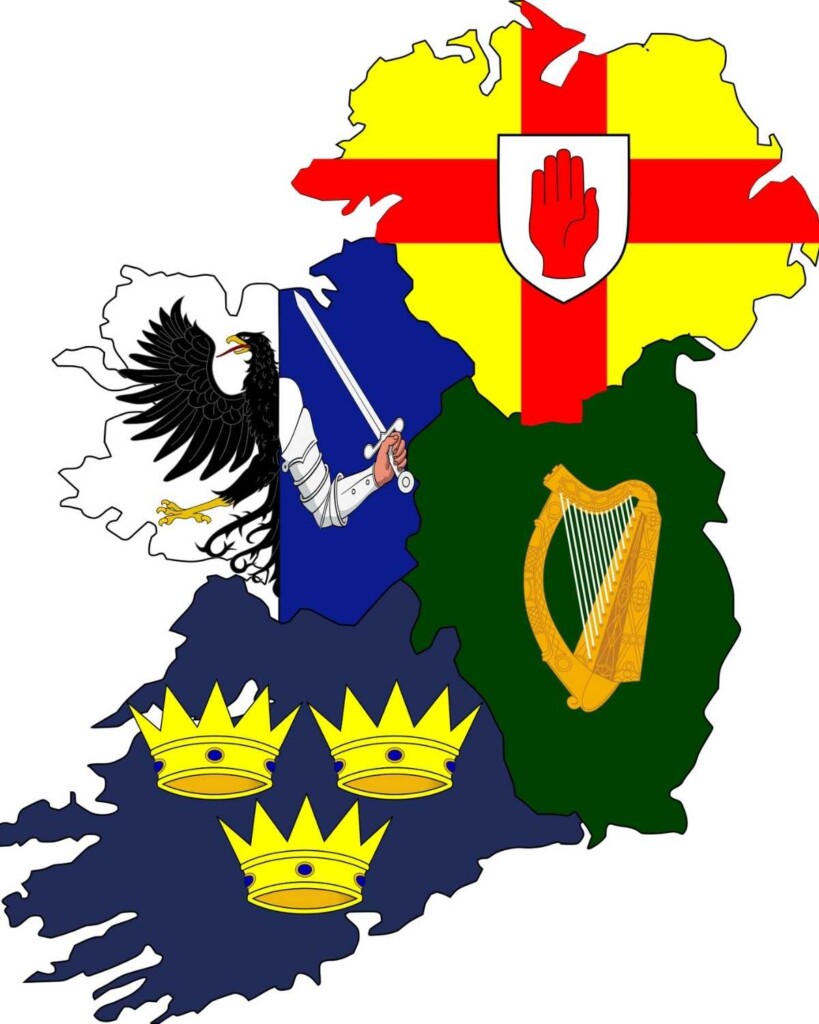 Origin of the Word Province in Ireland:

The English word "province" has its origins in the Latin Provinciam, which is a term that means "the territory of a Proconsul."

Proconsuls were the Roman Emperors' representatives who oversaw provinces. The word Proconsul is derived from the Latin Pro Consulem which means "from or for a consul." The Romans began appointing Proconsuls in 63 BC when they conquered Greece.

It was an office of great honor and power. However, Ireland was never ruled by the Romans. They never ventured beyond Britain to try to rule the Celts.

The ancient Irish term for this territorial division was cúige, pronounced koo-ig-eh, and meant "fifth part" because Ireland was divided into five separate provinces in Roman times.

Provinces of Ireland in Ancient Times

The division of Ireland into provinces or territories is first recorded in old myths and tales. The Ulster Cycle of legends contains the story of the Táin Bó Cúailgne (pronounced thawn bow koo-in-ya and meaning the Cattle Raid of Cooley).

This tale dates back to the 1st century during the reign of Conchobar Mac Neassa (or Connor MacNiece), the king of Ulster. Queeen Maeve of Connacth wished to steal his prize bull which led to a mighty battle and features Ireland's greatest warrior Cú Chulainn who fought for the Ulstermen.

At this time Ireland was supposedly divided into five independent over-kingdoms. Each rí (pronouced ree and meaning king) were considered equal and there was no High King. The idea of a High King in Ireland was first noted in the 7th century, but they had little unified power over the individual kingdoms within the country. 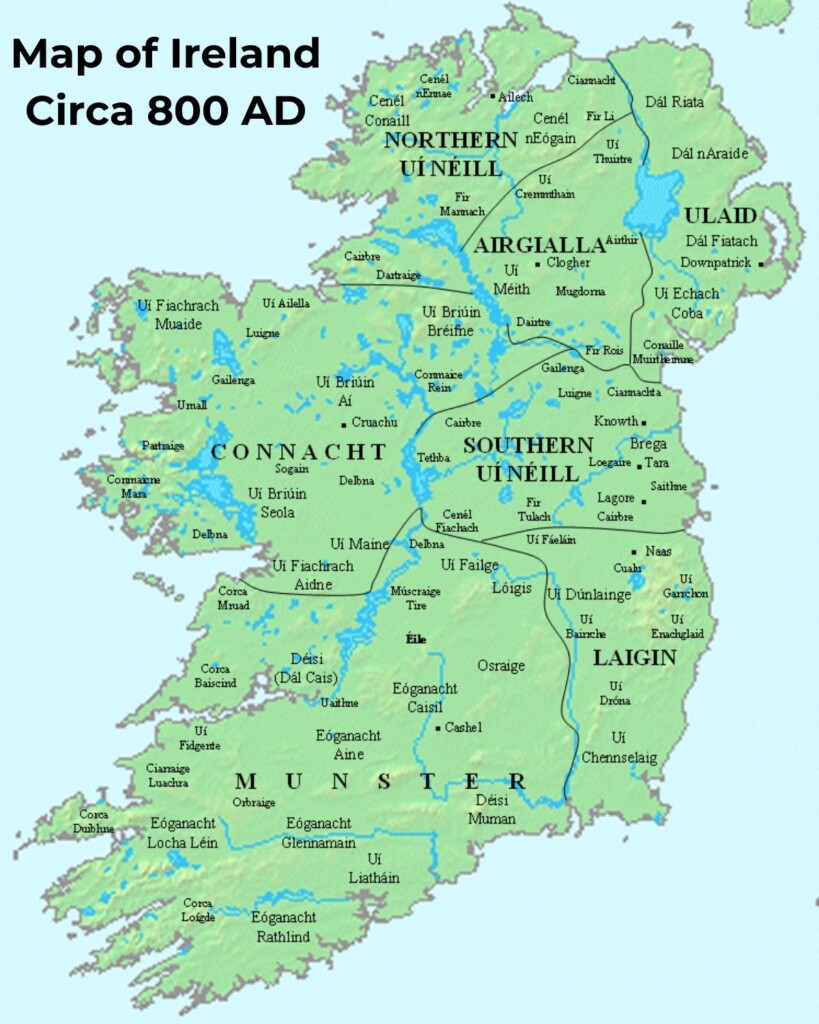 In the early centuries these five provinces changed and were reconfigured. By the 10th century Ireland consisted of a number of kingdoms including Munster, Connacht, Breifne, Northern Uí Néill, Ulaidh or Ulster, Airgialla, Southern Uí Néill or Míde, Osraige and Leinster.

By the 12th century the Irish kings were in no way united and there was much in-fighting between them. Dermot MacMurrough, the King of Leinster lost his title on the order of the High King, Rory O'Connor.

Dermot felt deep resentment and took off to England to recruit help to regain his title. He arrived in Ireland with Strongbow, a Norman knight in 1169, and the rest is history.

Over the coming years, decades and centuries Norman families arrived in Ireland, reshaping the political structures and changing the fate of the Celtic people forever.

The Northern O'Neill clan remained outside of Norman control. Gaelic control of the country grew stronger after Edward Bruce led a campaign against the English in 1315. He was defeated in County Louth, but his efforts emboldened the Irish chieftains. The Normans are said to have become "more Irish than the Irish themselves."

The O'Neill's united the kingdom of Ulster and in doing so they once again reduced the number of provinces or territories to five.

These Provinces were: Ulster in the North (Uladh), Connacht in the West (Connachta), Leinster to the East, and Munster to its South-West; with Meath stretching from Ireland's eastern sea coast to the central River Shannon. It was sometimes called the Lower or Southern Uí Néill kingdom. 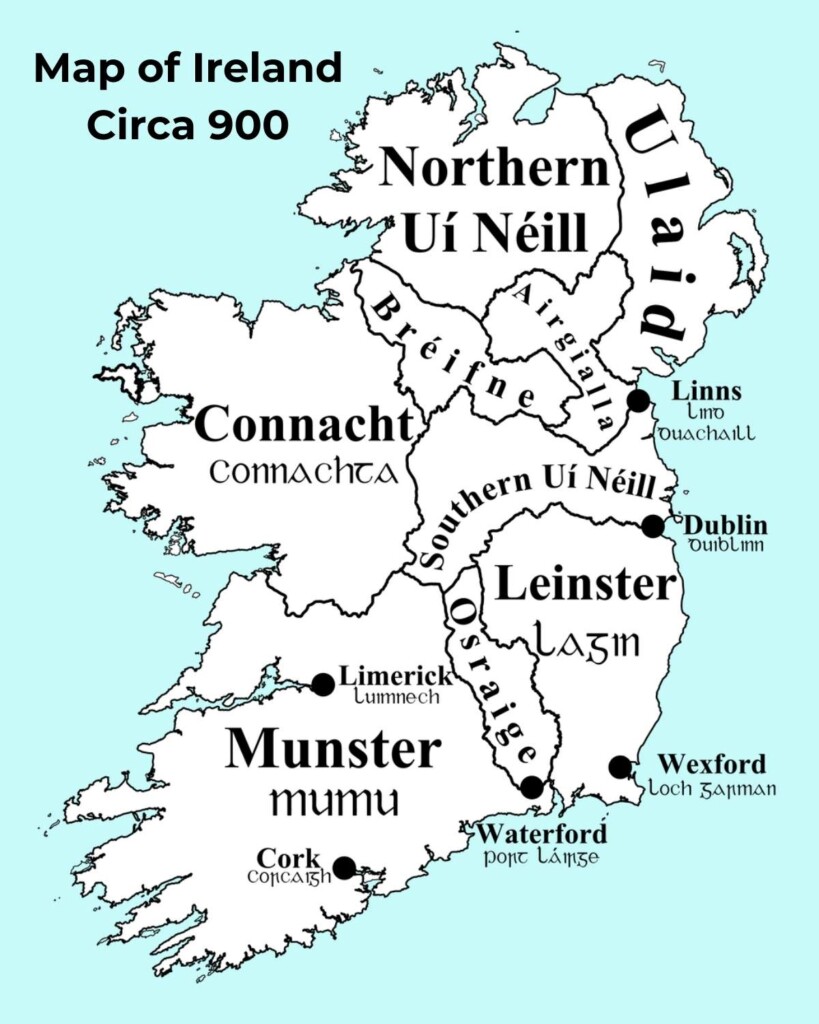 The Forgotten Fifth Province of Meath:

The Provinces in Ireland have changed significantly over time - most notably due to political reasons rather than natural borders such as rivers or mountain ranges. The medieval province known as Meath, is now part of modern day Leinster. The name derives from the old Irish word for middle.

Meath had a long and complex history, but many forget that it once was its own province. The ancient province of Meath occupied an area that is now found in the counties of Meath, Westmeath and part of Longford.

The capital of Meath was located at Tara, seat of the High King of Ireland. Meath was the location for some of ancient Ireland's most important historical events.

Tara had been a site for political and religious power since prehistory. The Hill of Tara in County Meath is where the High Kings of Ireland lived and were nominated at the magical stone known as the Lia Fáil . The ancient Irish would also gather in Tara on Samhain, the Celtic festival of the new year.

In addition to being a sacred site for the Celts and the druids, Tara became an important Christian site since St Patrick converted Ireland to Christianity in the fifth century.

The Hill of Tara continued to be important after the Norman invasion and was used as a meeting site by scholars, poets, historians and musicians who were working on their histories of Ireland. 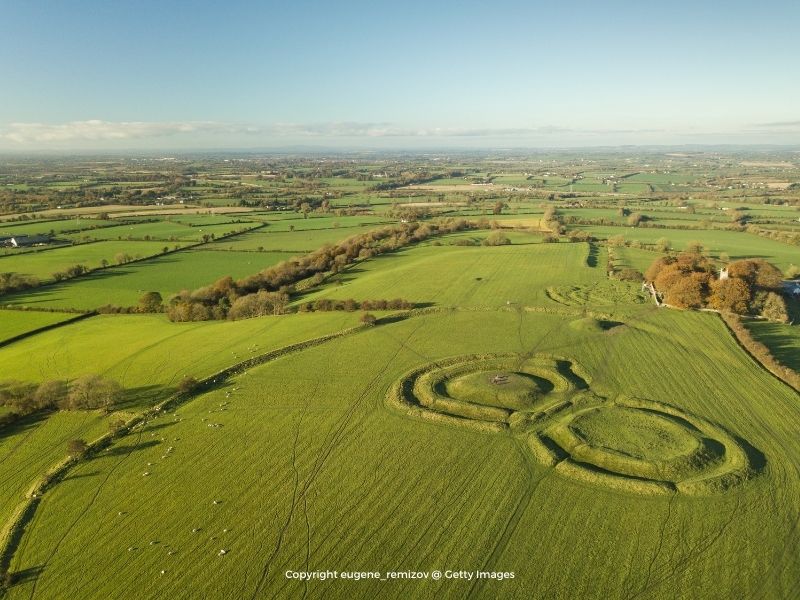 The Hill of Tara in County Meath

Why are there only four provinces today?

The creation of only four provinces in Ireland began in Tudor times.

In the 1530's King Henry VIII partitioned the kingdom of Meath to create two counties Westmeath and Eastmeath. The new county of Eastmeath quickly commandeered the old name of Meath. The modern boundaries for Counties Meath and Westmeath were set by Queen Elizabeth I in 1579, but they were still considered a separate province.

Queen Mary I who ruled over Ireland from 1553 to 1558 planed to divide the country into six portions consisting of Connaught, Leinster, Meath, Nether Munster, Upper Munster and Ulster. Elizabeth I assumed power in 1558 and this plan never came to fruition. During her reign until 1603 the internal map of Ireland was redrawn on many occasions.

In 1569 Elizabeth approved the creation of the provinces of Connaught and Munster but determined the River Shannon would be the boundary between the two. This meant County Clare became part of Connaught, where it remained until 1660 when it was returned to the province of Munster.

County Longford was created in 1569 from an area ruled by the O'Farrel clan. Some of it's previous northern area was transferred to Leitrim in Connacht. Some of its southern territory was granted to County Westmeath.

The next county established was Cavan in 1584. Originally this territory was in Leinster but it was transferred to Ulster.

County Louth, which had traditionally been part of Ulster, became part of Leinster due to its proximity to Dublin and the Pale.

Meath ceased to be considered a separate province in 1610 under the rule of James I. At this time the current provincial borders separating the four territories were permanently set.

Provinces in Ireland today have no legal status or adminsitrative function. There main function is in sporting competitions for the GAA (Gaelic Athletic Association) and the establishment of rugby teams.

However the people of Ireland recognize that they belong to one of the four provinces, Connacht, Leinster, Munster and Ulster. They assume a sense of identity based on where the county of their birth lies. 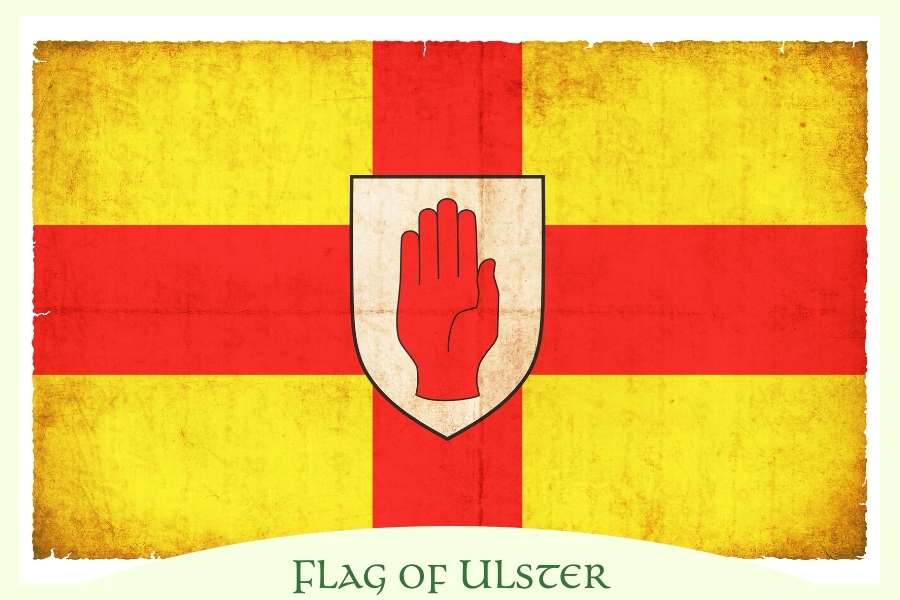 Ulster in the North:

The Province of Ulster is named after Ulaidh (Ulster) who was a mythical king that ruled over an ancient Gaelic kingdom.

Ulster is filled with folklore about faeries, leprechauns (a small mythical creature found in Irish mythology) and other supernatural beings common to Celtic mythology. The province's highest peak is Slieve Donard at 850 metres. 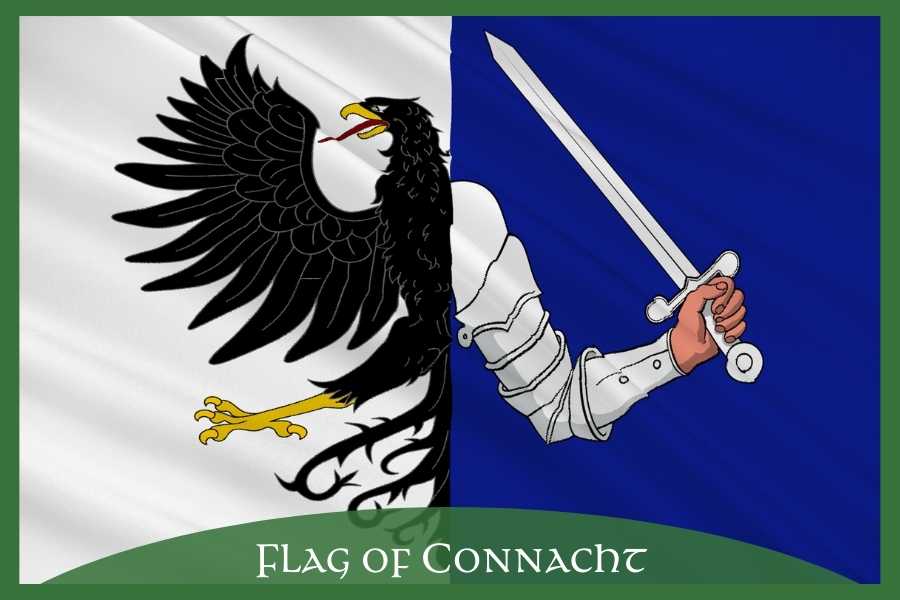 Connacht in the West:

The province of Connacht is the westernmost of Ireland's provinces with a long, indulating coastline stretching along Galway Bay and counties Mayo, Sligo and Leitrim.

Connacht has always been Ireland's most rugged region, with very poor and rocky land along the western coast. It is home to the largest Gaeltacht, or Irish speaking part of the country.

There are many important historical sites in Connacht, such as Croagh Patrick where Saint Patrick famously climbed on his knees in order to drive out native paganism.

When Cromwell conquered Ireland in the 17th century, he confiscated lands in the east from native Irish Catholics and sent them packing to the west with his infamous instruction "to hell or to Connacht."

He bestowed the fertile arable lands to the east to English planters and sent the Irish to eek out a living west of the Shannon. 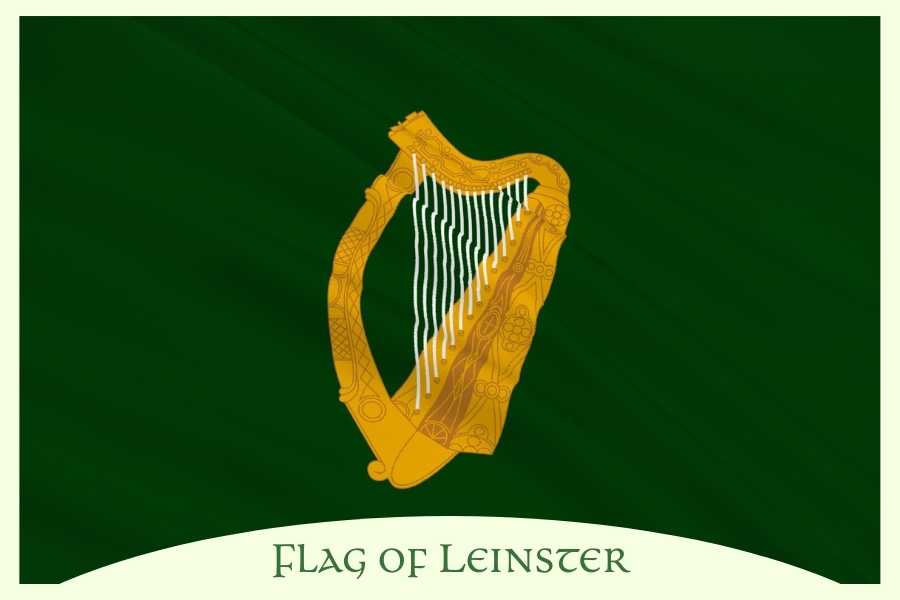 Leinster in the East:

Leinster lies on the eastern side of Ireland and is comprised of twelve counties.

Leinster is home to Ireland's capital city Dublin and is the most populated of all of the provinces. 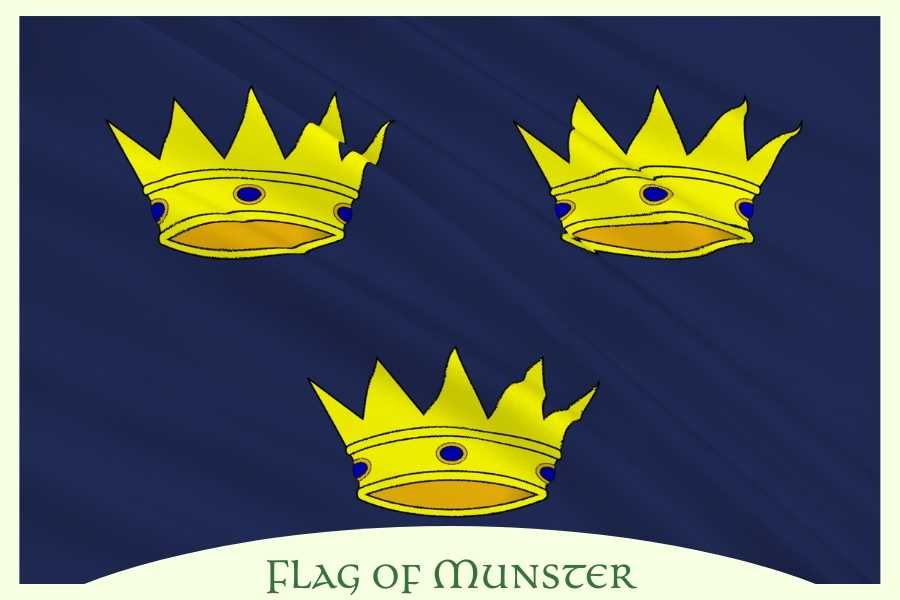 Munster in the South:

Lying in the southwestern portion of the Republic of Ireland, Munster is the largest of Ireland’s four provinces.

The six counties of Munster are Clare, Cork, Kerry, Limerick, Tipperary and Waterford.

It's home to Ireland's largest county, Cork and boasts spectacular scenery along the Wild Atlantic Way. Cork harbour is the second largest natural sea harbour in the world. The largest is Sydney harbour.

Is Northern Ireland a province?

Northern Ireland is not one of the Provinces of Ireland. It's actually part of the United Kingdom and shares its capital with England in London.

Northern Ireland was partitioned from the province of Ulster in 1921, when it became a part of the United Kingdom.

At the time of partition in 1921 the province of Ulster was divided with six counties remaining under British rule. Three counties were returned to the Irish Free State, which would eventually become the Republic of Ireland in 1939. 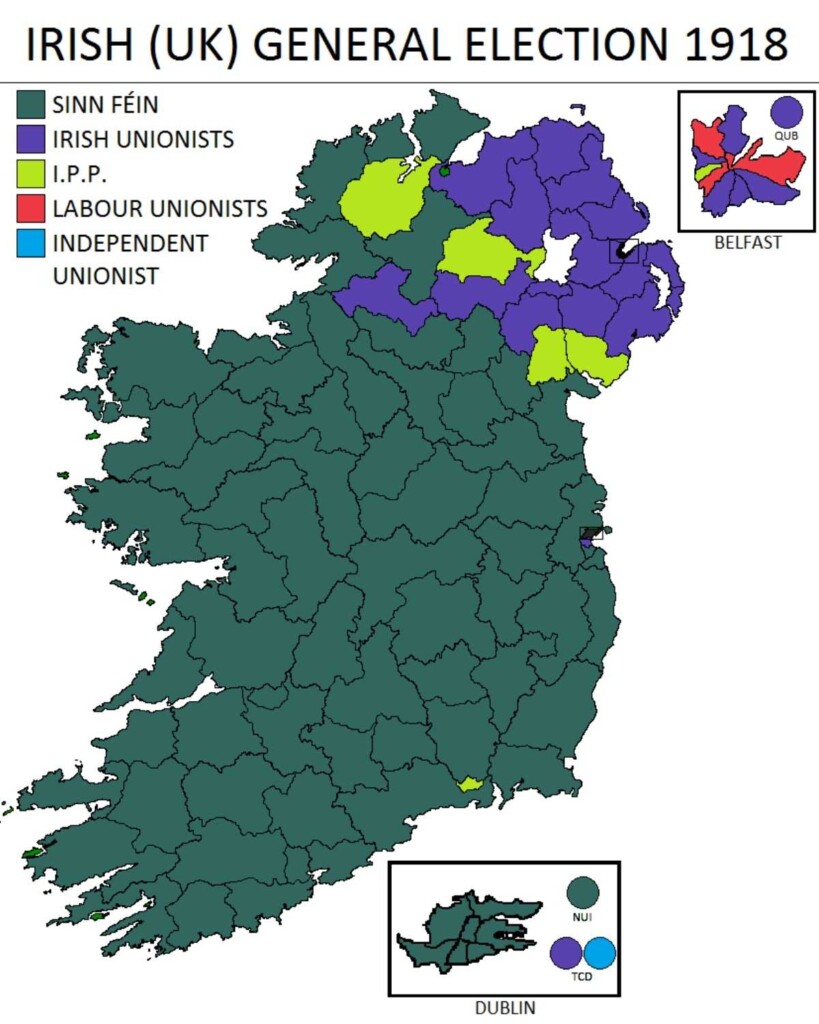 What is the reason that Ulster was divided in two at the time of partition?

Ulster was home to many plantations of Ulster Scots in the 16th and 17th centuries. In the early 20th century tt was the only province where the Protestant population was close to that of the Catholic population.

In 1921 there was a majority Protestant population in the counties that were annexed to remain as part of the United Kingdom. The remaining counties of Donegal, Cavan and Monaghan had a large Roman Catholic population.

If the whole province of Ulster had been annexed the Protestant and Catholic populations would have been close to equal. Northern Ireland was created along a border with no historical significance.

The sole purpose of this border was to create a territory with an artificial majority of Unionists, or people who wished Ireland to remain as part of the United Kingdom.

This created an unstable situation which eventually led to the Troubles in Northern Ireland. 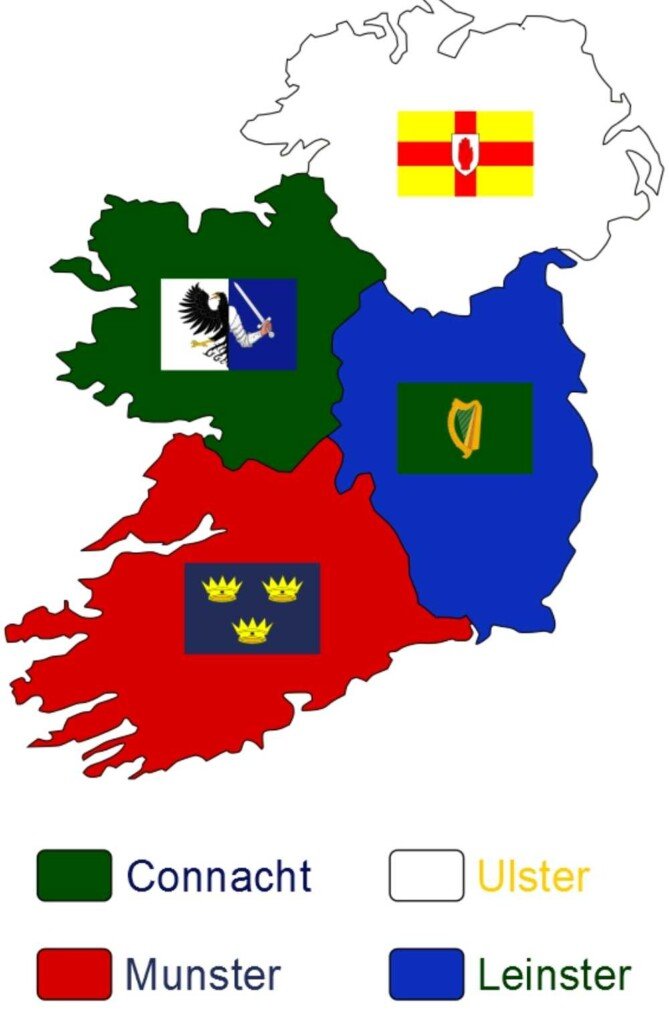 I hope you enjoyed this quick history of Ireland's provinces.

Thanks so much for following my Irish recipes and ramblings as we continue our cultural journey of discovery.