County Kerry is a mystical, rugged, and scenic Irish county that has captivated tourists for hundreds of years, making the Ring of Kerry one of the most famous attractions in all of Ireland. 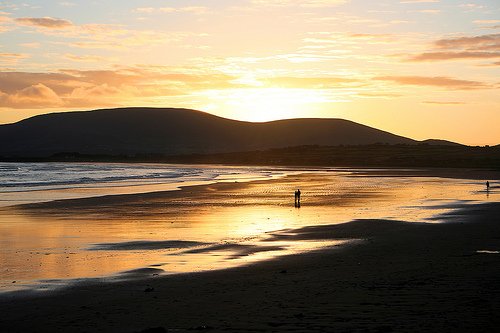 Waterville On The Ring Of Kerry At Sunset

Known as The Kingdom to the people of Kerry, the county is the closest any tourist will get to experiencing an ancient, mythical, Celtic kingdom. Misty mountains, glacial lakes, rugged peninsulas, magical rainbows, secluded hamlets and windswept beaches await.

Larger towns like Tralee, Killarney and Kenmare provide wonderful accommodations from budget friendly hostels to luxury castle hotels. Many pubs host live traditional music sessions in the evenings, so tourists can experience the warm welcome of the Kerry people.

Kerry is one of the six counties of the province of Munster, one of the ancient Celtic divisions of Ireland. You’ll find County Kerry on the map below, highlighted in dark green in the southwest corner of the island. 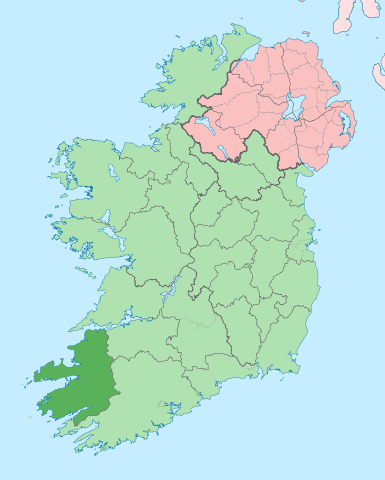 Kerry is the 5th largest county in all of Ireland. It’s coastline is long and makes up part of the Wild Atlantic Way.

The scenery is simply breathtaking and majestic. I hope you enjoy the short video tour I included to give you a little feel for The Kingdom of Kerry in all its splendor.

Did you know that Kerry was the first county in Ireland to boast a thriving tourist industry was. The Lakes of Killarney drew tourists over 200 years ago. Queen Victoria even visited and to this very day, the Ring of Kerry is the most visited place in Ireland.

But why do tourists flock to County Kerry? Join me on this photographic tour and we’ll take a look at some of the beautiful wild scenery and learn how this corner of Ireland is steeped in history.

Ballybunion is located in the northern part of the county and is famous for its challenging, blustery golf courses. 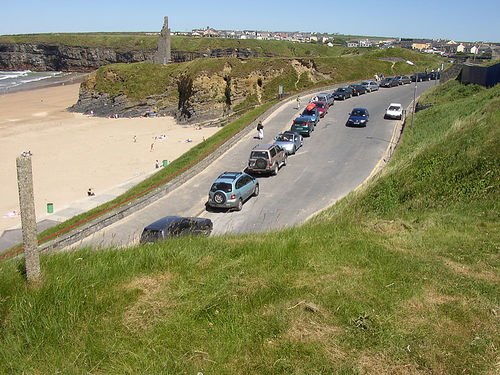 The town boasts a statue of President Bill Clinton holding his golf club, to commemorate his trip to the town.

Also famous for its sandy beach, Ballybunion is a surfer’s paradise.

Located in the very heart of north Kerry on the banks of the river Feale is the town of Listowel.

The ancient stone keep, Listowel Castle, dates back to the 1300’s. 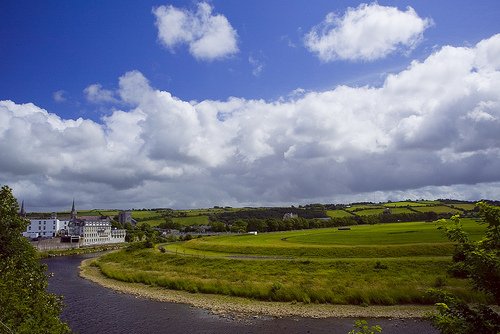 Listowel And Its Racetrack On The Banks Of The River Feale.

The town is also famous as the home of the writer John B. Keane.

It hosts an annual literary festival and the famous Listowel Races.

Tralee is the largest town in County Kerry, established in the 13th century.

Tralee town sits beside the River Lee from whence it takes its name, in Irish, Trá Lí meaning ‘strand of the Lee’. 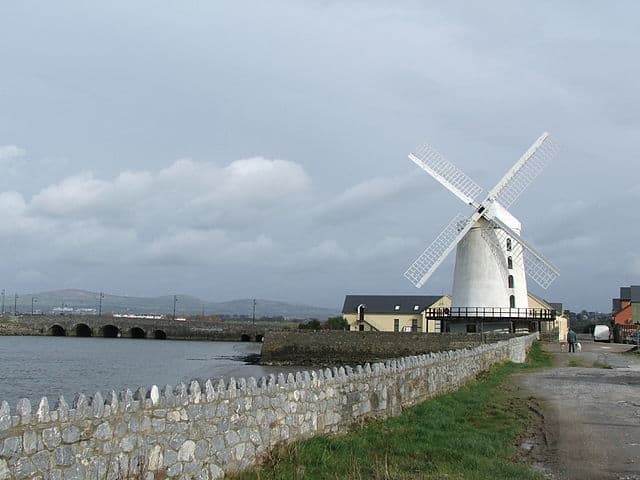 The northern access route onto the Dingle Peninsula starts in the town.

Just outside the town you’ll find Blennerville Windmill, an unmistakable landmark in Tralee Bay. This is where the town of Tralee meets the Dingle Peninsula.

The Blennerville Visitor Centre is well worth a visit and features a working windmill, an exhibition gallery, and Emigration display and a bird watching platform. 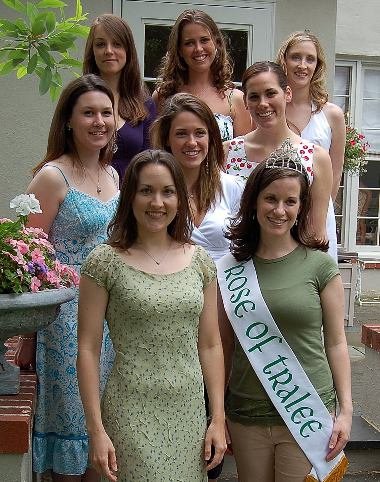 The annual Rose of Tralee Festival crowns one fair maiden as the winner.

Her duties, you ask.??? It’s simple – just represent Ireland to the world. No pressure whatsoever!!!

The Dingle Peninsula has the highest density of ancient archaeological monuments of any other landscape in western Europe. 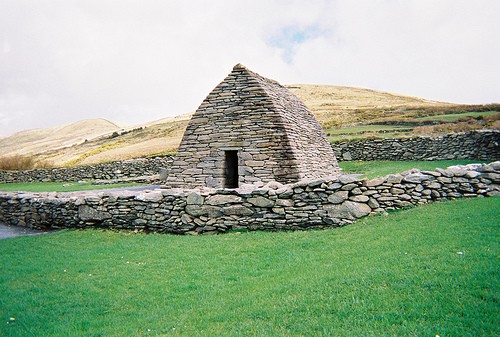 The Gallarus Oratory pictured above, is a small stone chapel dating back to between the 6th and 9th century AD.

Almost 70 Ogham stones are dotted around the area. Ogham (pronounced “oh-am”) is the earliest form of Irish writing.

It is thought the stones may be old landmarks, or possibly could be signs associated with land ownership. 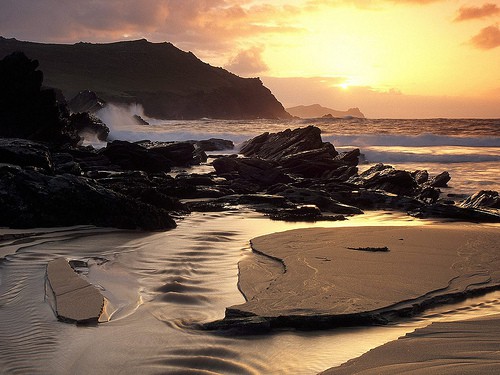 The Dingle Peninsula is a mountainous finger of land which juts into the Atlantic Ocean. The Conor Pass connects the peninsula to the Tralee road and offers some of the most amazing ocean views in all of Ireland.

Be prepared for some daunting twists and turns, as the road hugs the edge of Atlantic cliffs with sheer drop-offs. Spectacular beaches await, with breathtaking sunsets over the Atlantic Ocean.

Inch Beach On The Dingle Peninsula

Inch Beach on the Dingle Peninsula is a beautiful sandy strand. The movie Ryan’s Daughter was filmed here.

Dingle, in my estimation, can be counted as one of the most beautiful places in the world.

On a sunny day, there is nowhere on earth quite like it. And on a wet day, you can’t beat the inviting atmosphere of one of Dingle’s many pubs and cafes. 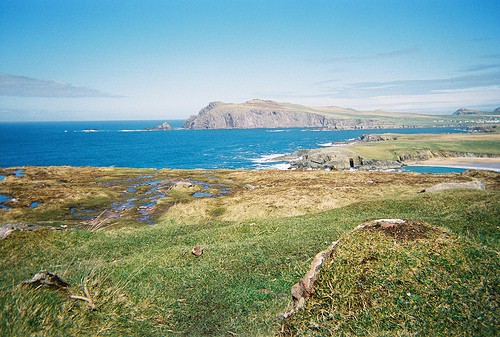 Slea Head is a promontory on the westernmost point of the Dingle Peninsula offering spectacular views of the Blasket Islands.

The Blasket Islands lie off the coast and were inhabited until 1953. The islands were home to native Irish speakers, many of whom immigrated from Ireland and settled in Springfield, Massachussets.

Others moved across the water to Dingle, and their descendants continue to live within sight of their island home.

Killarney is a hub of activity for tourists seeking to undertake a tour of the famous Ring of Kerry. 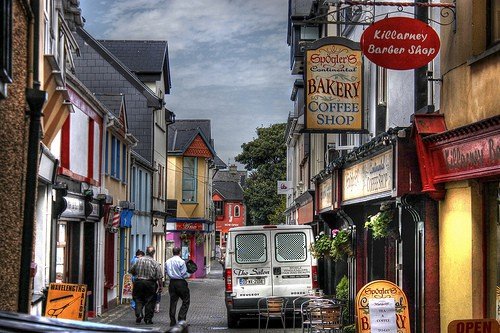 My advice is not to rush out of town, but to spend some time savoring the atmosphere and visiting some of the local tourist attractions. 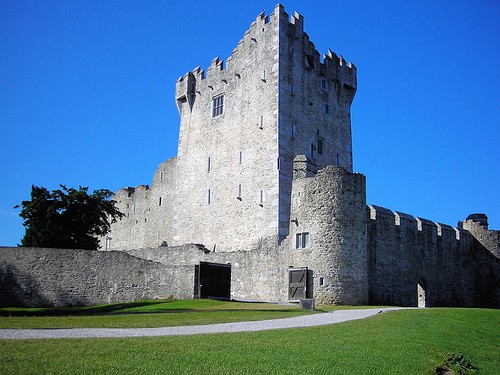 Ross Castle, near Killarney, is open for tours. It is an example of an Irish chieftan’s stronghold during the Middle Ages. 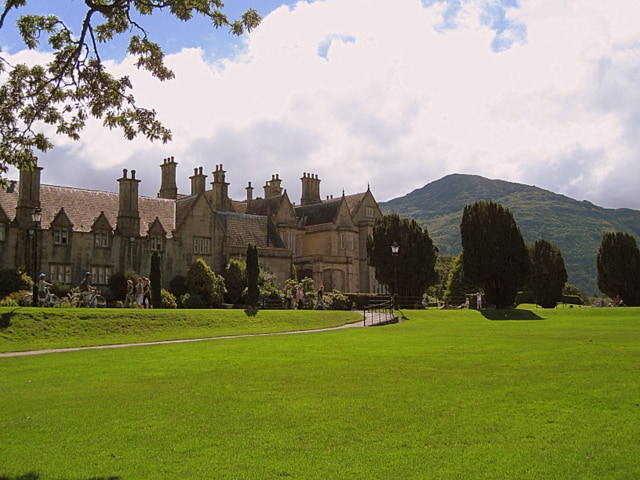 Within Killarney National Park lies Muckross House, a magnificent Victorian mansion. Here, tourists can appreciate the lifestyle of Ireland’s once landed gentry. Downstairs, the basement displays the life of the servants. 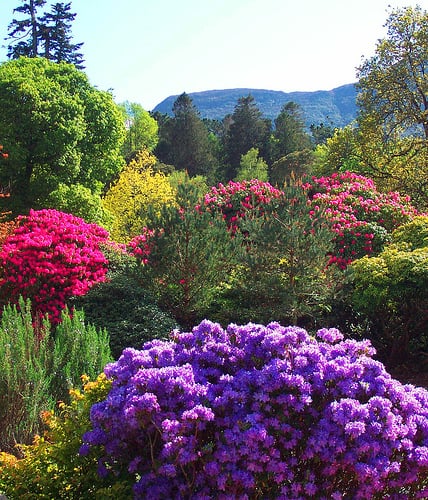 The Gardens at Muckross House are renowned for magnificent azaleas and rhododendrons, a water garden, and rock garden. 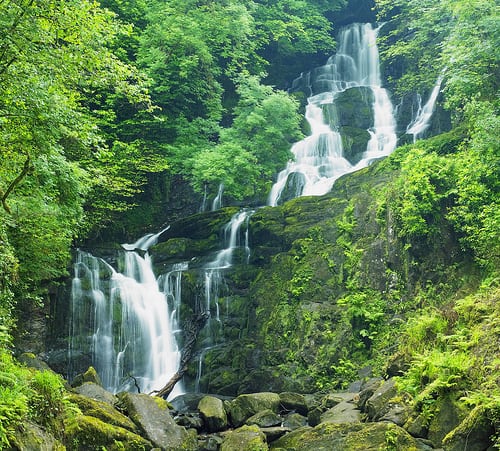 Torc Waterfall is one of Killarney’s famous tourist attractions. You may not wish for rain on your trip to Ireland, but after a good downpour these falls are even more spectacular.

For the more energetic visitor, there are about 100 steps at the side of the falls. At the top a magnificent view of the lakes awaits. Torc Waterfall is a busy stopping point for bus and coach tours. 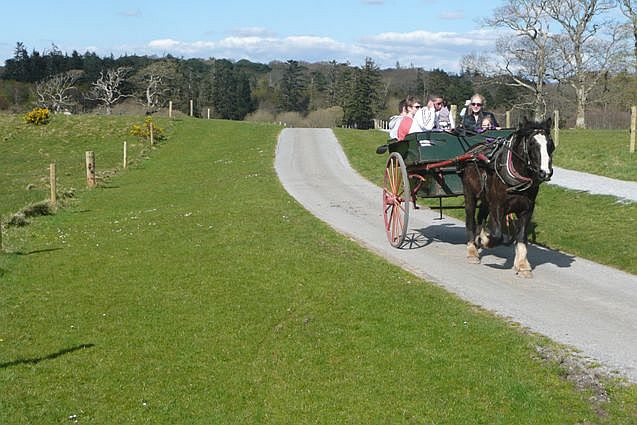 Killarney is well known for its jaunting car tours of the surrounding lakes and national park. To some this may seem a little too touristy, but trust me, the drivers of these jaunting cars are experts on local culture, environment and history. They are true entertainers.

I remember taking a jaunting car trip as a child and laughing my heart out at our hilarious driver. He even told jokes to entertain kids. As they say in Ireland – “he was a real character”. 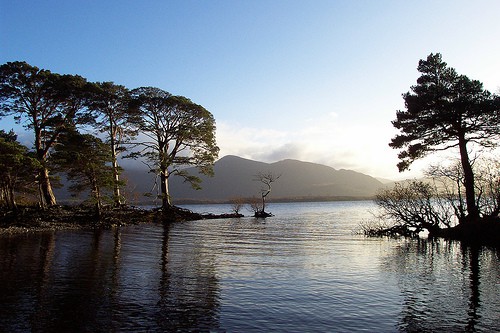 To the southwest of the town, lies Killarney National Park, a 26,000 acre expanse of rugged, mountainous country. The extraordinary combination of misty mountains, reflective lakes, whispering woods and cascading waterfalls, all under tumultuous changing skies, adds magnificence to the scenic beauty of this natural wonderland. 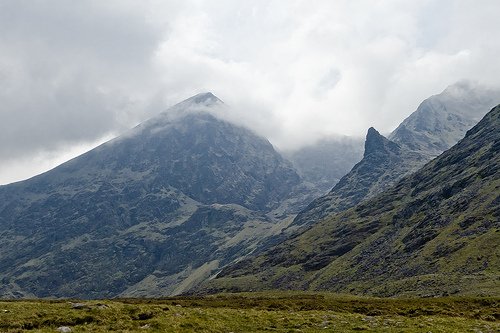 Carrauntoohil is Ireland’s highest mountain and is part of the Macgillycuddy’s Reeks range, which boasts nine of Ireland’s ten tallest peaks.

The Ring of Kerry:

The Ring of Kerry is world renowned and is probably Ireland’s most popular drive.

This magnificent route takes drivers through rolling heather and gorse covered hills, along rugged coastline and through lively and colorful Irish towns. The landscape and scenery is everything you imagine Ireland to be. 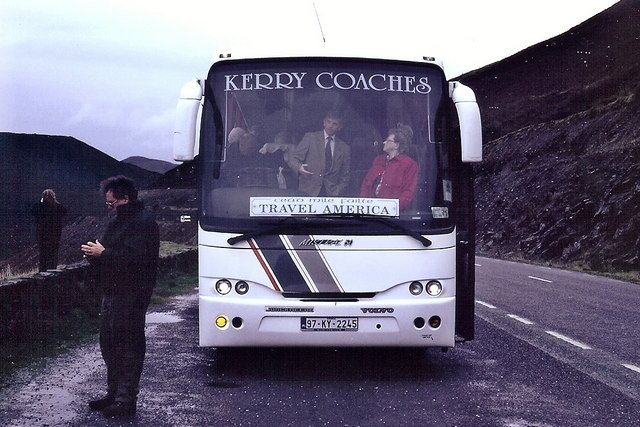 Many tourists envision the Ring of Kerry as a town, or a place they can visit for an hour or two.

The Ring is in fact a looping road which winds for 179 kilometers around the Iveragh Peninsula. In the summer months, many tour buses can be spotted, winding around the coast or stopped at scenic viewpoints dotted along the route.

Driving the Ring of Kerry is an experience of a lifetime. Here the mountains meet the ocean with scenic splendor, making this trip one of the world’s most spectacular drives. 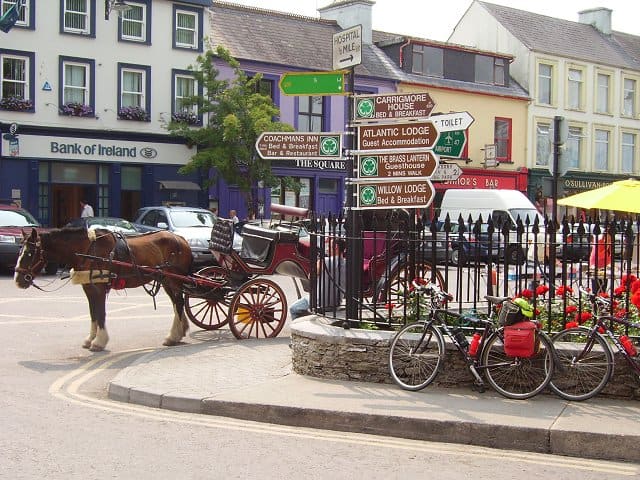 The Town of Kenmare

The town of Kenmare is a perfect stopping point on a tour of the Ring of Kerry. South of the busier hub of Killarney, it is a great central point for touring Cork and Kerry.

Brightly colored houses, shops, bars, restaurants and hotels line the streets of this welcoming town, nestled in the Kerry mountains and set against the splendid backdrop of Kenmare Bay. 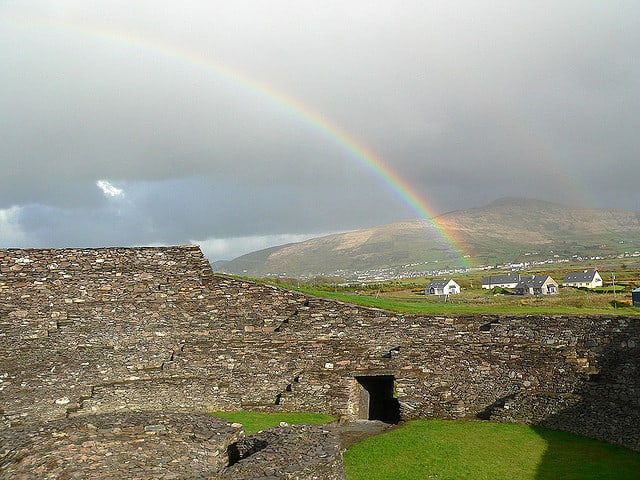 Everywhere in Kerry, it is easy to feel connected to our ancient, mythical past. Archaeological treasures seem to dot the roadsides and countryside. 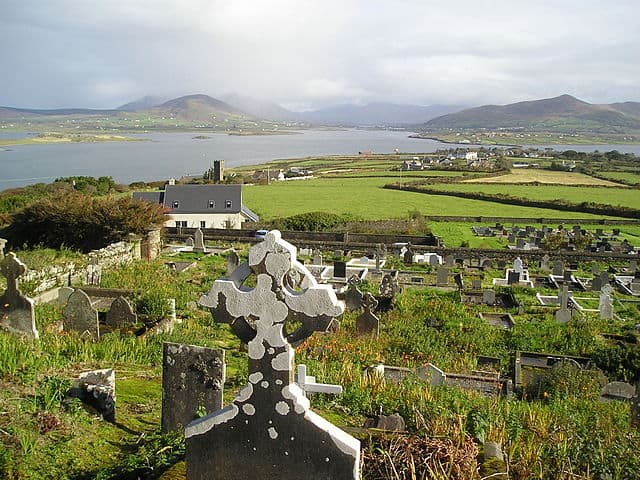 Valentia Island is located on the western loop of the famous Ring, and for such a small island boasts an amazing history.

The oldest footprints in the northern hemisphere were found on the cliffs here. Slate from the island’s quarry was exported all over the world and was used to roof the Paris Opera House and the London Houses of Parliament.

The first weather forecasting station was set up here in 1860 and the first transatlantic cable landed here in August 1858. This little island deserves a blog post all of its own. 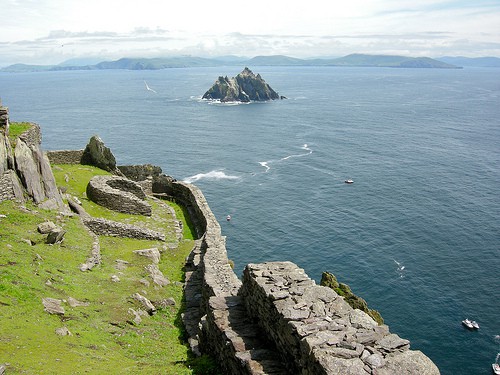 Little Skellig from Skellig Michael – Islands In The Atlantic

The Skellig Islands, off the Kerry coast, are home to a 7th century monastic complex, perched on the steep sides of the rocky island of Skellig Michael. The extreme remoteness of Skellig Michael has until recently discouraged visitors. The site is therefore exceptionally well preserved.

And so we come to the end of our tour of County Kerry. There are many places I had not time nor space to include today, but trust me, if there is a county in Ireland that is not to be missed, County Kerry falls into that category.

I hope this short tour serves as visual proof why Kerry is one of Ireland’s most popular counties for tourists to visit.

And trust me, many who visit fall in love with this welcoming place, and one visit is never enough.

Here are some links to help with planning a trip to this Celtic Kingdom of Kerry.

For links to Irish American Mom’s tour of the other counties of Ireland here is the link:

Wishing you all happy travels in the land of my birth. 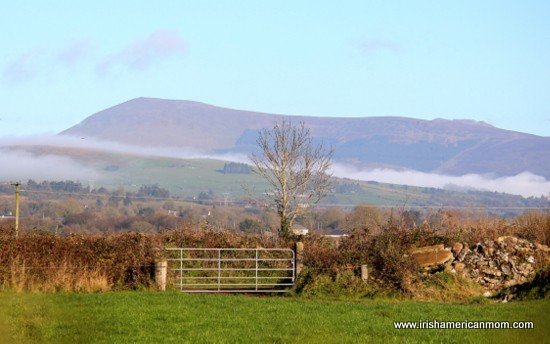 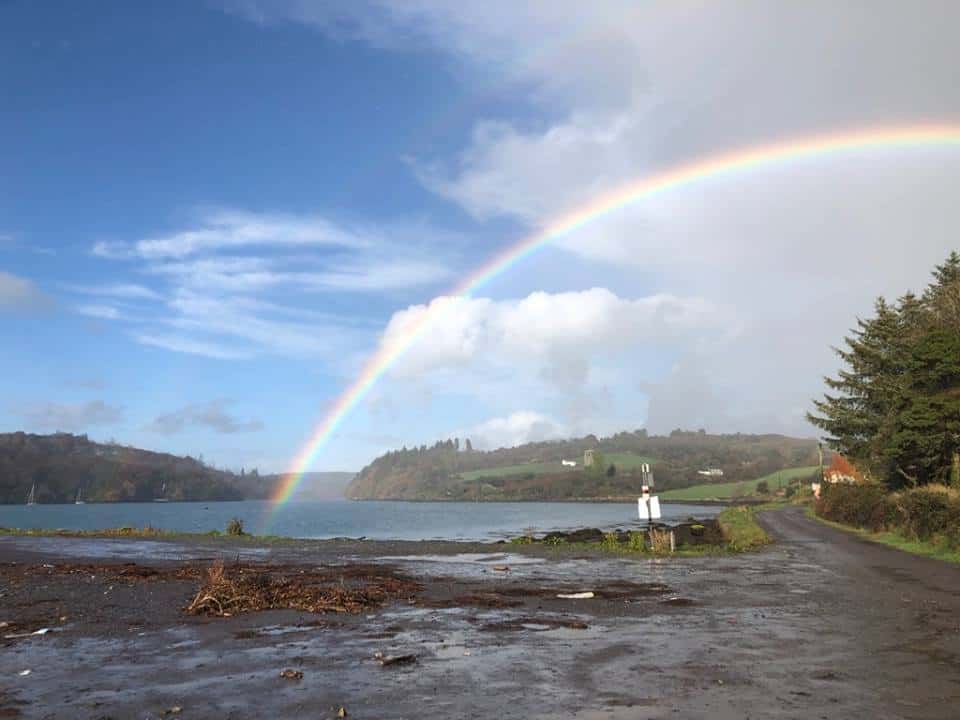 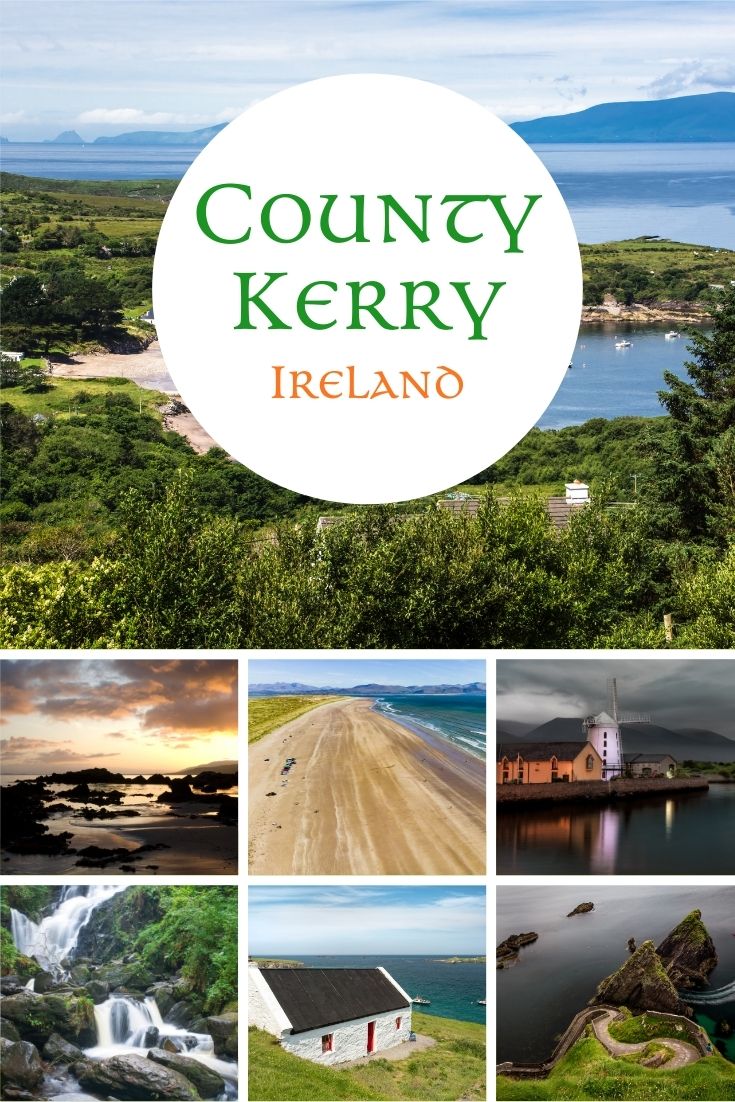 Previous Post: « Fish On Friday And The Discovery Of The New World.
Next Post: Kerry Or Irish Apple Cake »