County Antrim boasts a magnificent coastline. The Causeway Coastal Route spans its ocean perimeter, passing through some of the most spectacular scenery in all of Ireland and Europe.

Today I have chosen to share a few photos of this beautiful county.

There are many sites I have omitted since time and space only allow a “wee peek” at County Antrim’s splendor.

Location of County Antrim In Ulster And Northern Ireland:

Situated in the northeast corner of the island, Co. Antrim is part of the nine counties of Ulster, one of the ancient Celtic provinces of Ireland. 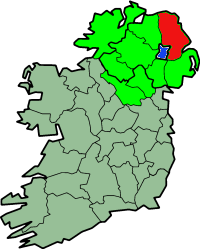 It is one of the six counties of Northern Ireland, and part of the United Kingdom.

Here’s a short video to take you on an armchair tour of this spectacular county.

Man initially crossed to Ireland from Scotland, making Antrim the first site of human settlement on the island of Ireland. The big question is whether they arrived by boat or across a land bridge.

In recent years, scientific evidence has suggested that it’s doubtful that a land bridge ever existed. Sea level would need to have been significantly lower than today for there to have been a bridge between Scotland and Antrim. 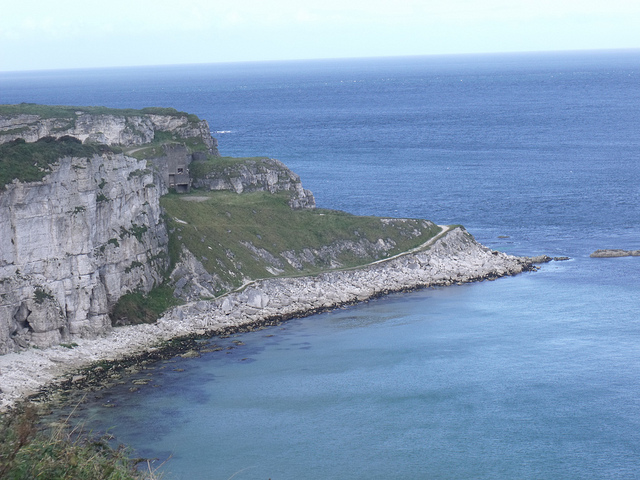 It was only about 10,000 years ago that the first settlers arrived in Ireland, and most likely they arrived by boat.

Archaeological evidence of these early settlers has been found in County Antrim at a place called Mound Sandel, near the town of Coleraine.

This spectacular coastal drive hugs the coastline of the Emerald Isle from Belfast in County Antrim, to the city of Derry or Londonderry in County Derry. 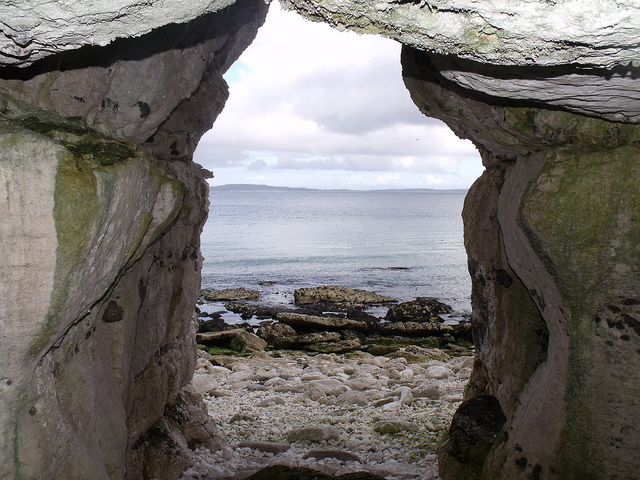 The road runs close to the coastline along vast stretches of the route and in County Antrim there are many wonderful sites and sights to see along the way.

Carrickfergus is an ancient settlement that pre-dates Belfast. In years gone by it was the main port for the area. Recorded history of the area focuses on the incredible castle build on the shoreline.

Carrickfergus Castle is a Norman castle in Northern Ireland, on the northern shore of Belfast Lough.

Over the centuries this stronghold was besieged by the Scots, Irish, English and French, and despite its tumultuous history it remains one of the best preserved medieval structures in Ireland.

A visit to the castle is highly recommend. It boasts excellent historical displays, cannons from the 17th to the 19th centuries, and a Great Hall at the top of the Great Tower. 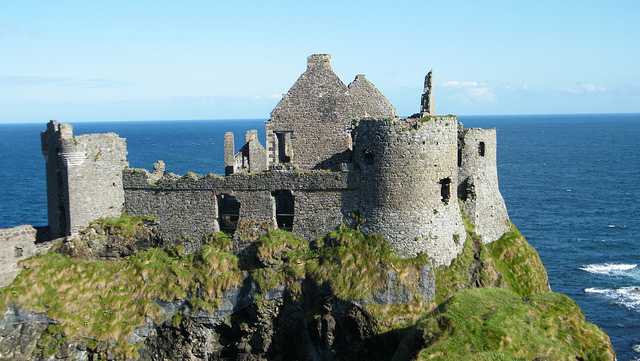 Dunluce Castle, a ruined, evocative medieval castle, is perched majestically atop a rocky outcrop high above the Atlantic ocean swells.

It dates back to the 13th century. Reports of a wandering ghost abound, possibly the spirit of a servant lost to sea on a stormy night in 1639 when half the castle kitchen fell into the ocean.

The Gobbins is an exhilarating cliff-face path, that includes spectacular tubular and suspension bridges, caves, steps and tunnels.

Located on the scenic Islandmagee peninsula, the attraction affords access to the rugged Antrim Coast unlike any other attraction. 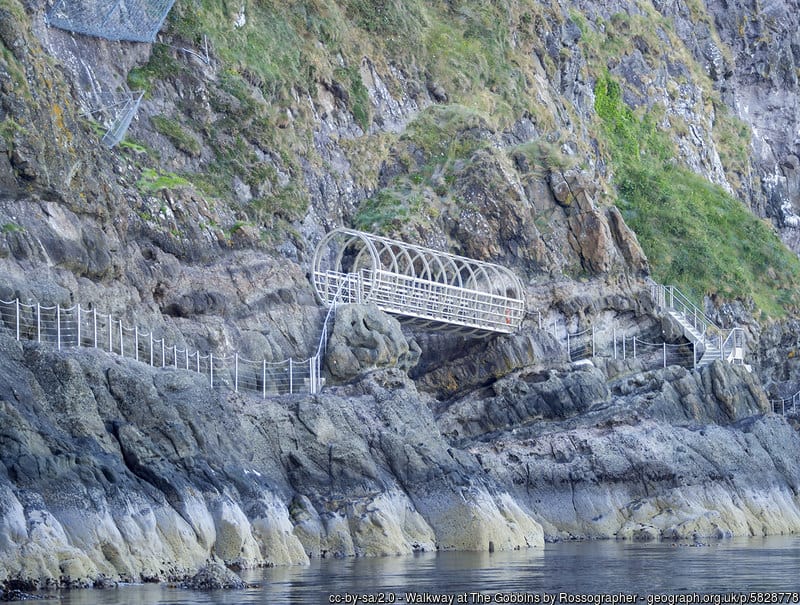 This is a thrilling walk and the scenery is quite dramatic. A word of warning – the footing can be challenging along this path.

For those who are not physically able to take on this route, there’s also a fascinating Visitor Centre and cliff-top path which is less arduous.

Another Causeway Coastal attraction for thrill seekers is the Carrickarede rope bridge. 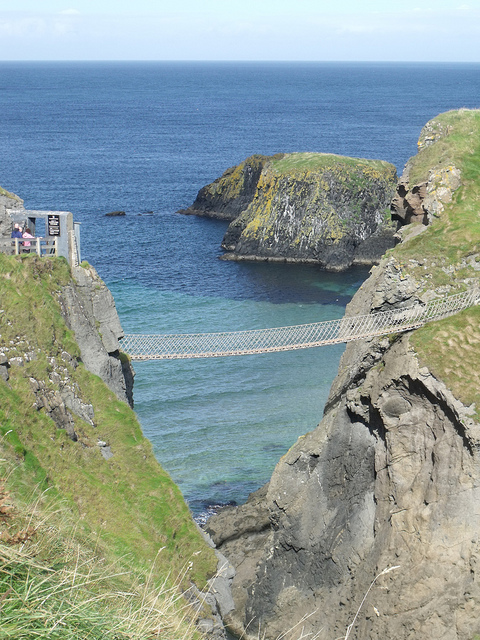 The original structure, with one handrail and widely spaced slats, was not for the faint-hearted. In times gone by, fishermen traversed the bridge with freshly caught salmon. 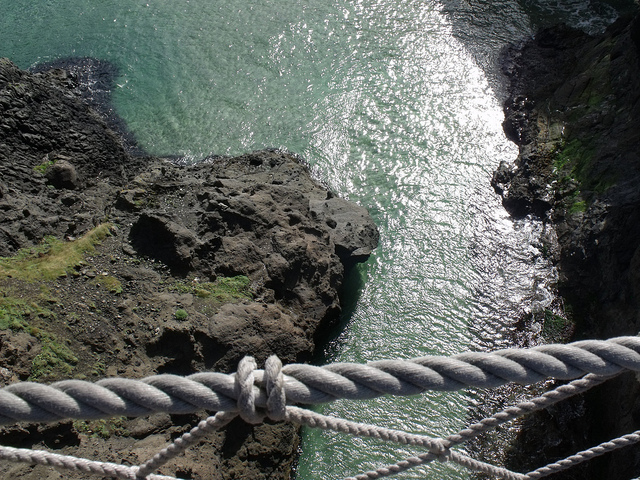 The photo above shows the view from over the rope bridge captured by my brother-in-law.

The rope bridge was reconstructed in the year 2000, with two hand rails to grasp firmly with both hands, as you bounce across the chasm.

The Giant’s Causeway is the most interesting and spectacular spot along the Causeway Coastal Route. In fact, it is this geological wonder that lends its name to the whole driving route. 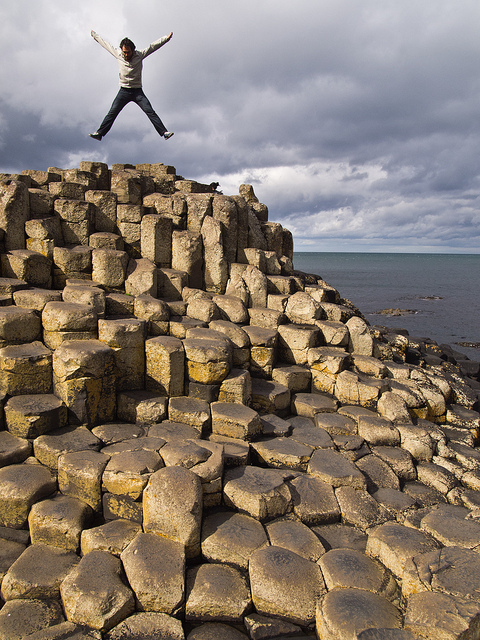 The Giant’s Causeway is one of Ireland’s great natural wonders.

Famous for it’s bizarre, hexaganol, basalt columns leading in a path to the ocean, this four-mile-long stretch of Antrim coastline is a World Heritage Site.

This incredible site features in many Irish myths and legends. Finn MacCool (Fionn Mac Cumhaill in Irish), the leader of the mythical Irish army, the Fianna, is said to have built this feature of the Antrim coastline.

A new, state-of-the-art Visitor Centre shares the stories of this rock formation. Visitors must walk down to the shoreline to explore the intriguing polygonal stones. It’s fun to search out distinctive formations such as the Camel, Wishing Chair, Granny and Organ – great fun for kids. 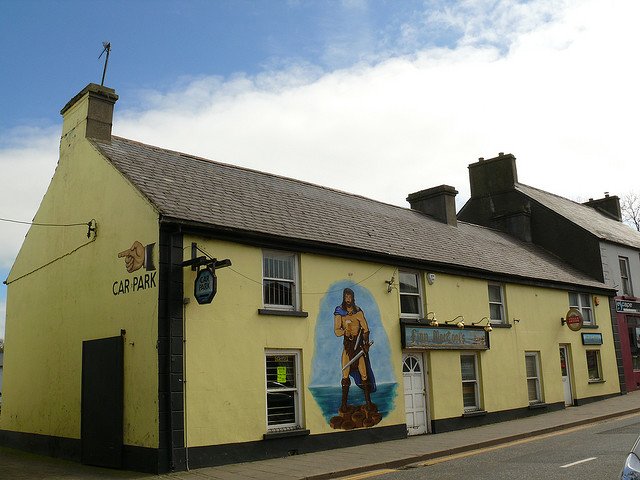 Many Irish legends find their roots in County Antrim, a favorite haunt of the mythical Irish giant Finn McCool (Fionn MacCumhaill in Irish).

I love the pub mural above, found in the town of Bushmills. If you look closely you will spot a beer glass in Finn’s right hand. Even giants get thirsty and need a pint!

The Bushmills whiskey distillery within the town claims to be the oldest distillery in the world.

Tour guides lead visitors through the complete process of whiskey production, including the Irish practice of distilling whiskey a total of three times. The result is supposedly a smoother spirit than Scotch whisky, which is only distilled once or twice.

The Glens of Antrim:

The Glens of Antrim are nestled between beautiful mountains. There are nine glens altogether.

Each of these glens boasts its own scenic drive. I love the lyrical names of these glens including Glencloy, Glentaisie and Glenballyemon. Glenariff Forest Park is home to bracing walks and breathtaking waterfalls. 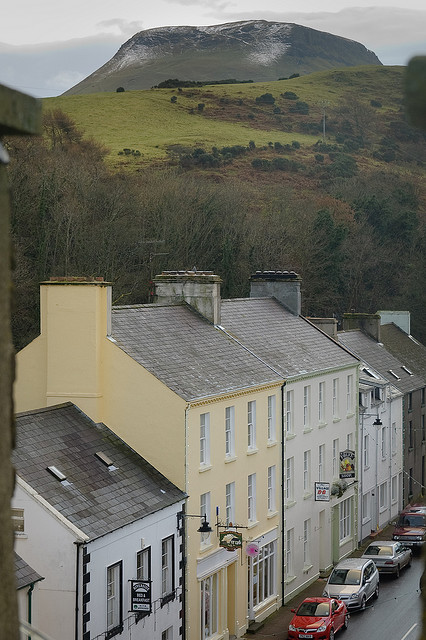 Picturesque towns and villages nestle amongst the hills and glens of Antrim. Stop off for a traditional music session in the many pubs and restaurants you’ll find in Antrim’s villages and towns.

Slemish Mountain is an extinct volcano. It’s humpback profile is unmistakable as it rises above the surrounding fields and plain.

Slemish is mot famous for its associations with Saint Patrick. It is here that Saint Patrick is said to have tended sheep for six years as a slave.

Hillwalkers can enjoy a looped walk which takes you all the way the summit. You’ll be following in the footsteps of Saint Patrick and this is a popular pilgrimage walk on Saint Patrick’s Day each year.

Portrush is a perfect base for exploring the Antrim Coast. 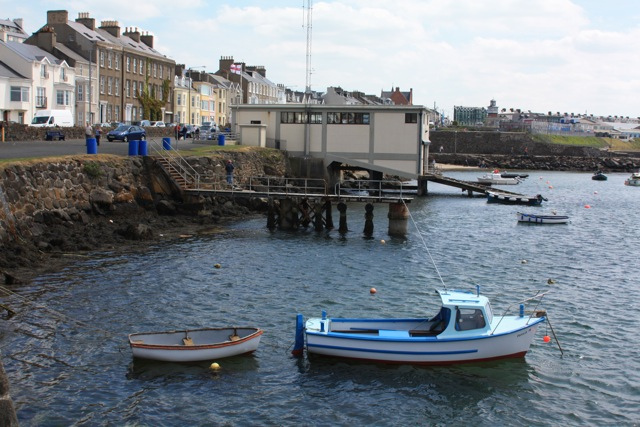 Portrush resembles a British seaside resort, with sandy beach and a shoreline promenade.

With numerous hotels, guesthouses, restaurants, cafes and bars, it’ a great spot to spend a night or two.

Belfast is the largest city in Northern Ireland, straddling both County Antrim and County Down.

City Hall is an impressive structure, built between 1888 and 1906, to commemorate Queen Victoria bestowing the status of city to Belfast. 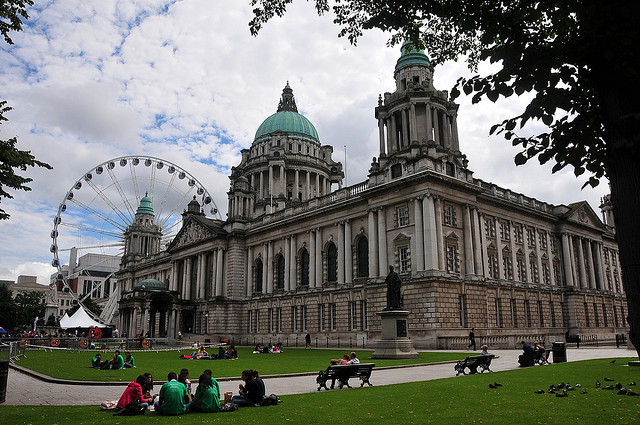 Home to the Titanic Museum and Visitors Centre, it’s becoming more and more popular as a tourist destination each year. The Titanic ship was built at the Harland and Wolfe ship building yards in Belfast, before being launched on its doomed first voyage.

Belfast is ideal for a city break. Renowned for excellent dining, nightlife, shopping and cultural attractions, it is perfect for sightseeing. Highlights include the Ulster Museum, Belfast Castle and Crumlin Road Gaol.

The Dark Hedges have become one of the most famous and photographed natural phenomena in Northern Ireland. They were featured in Game of Thrones adding to their attraction as a tourist site. 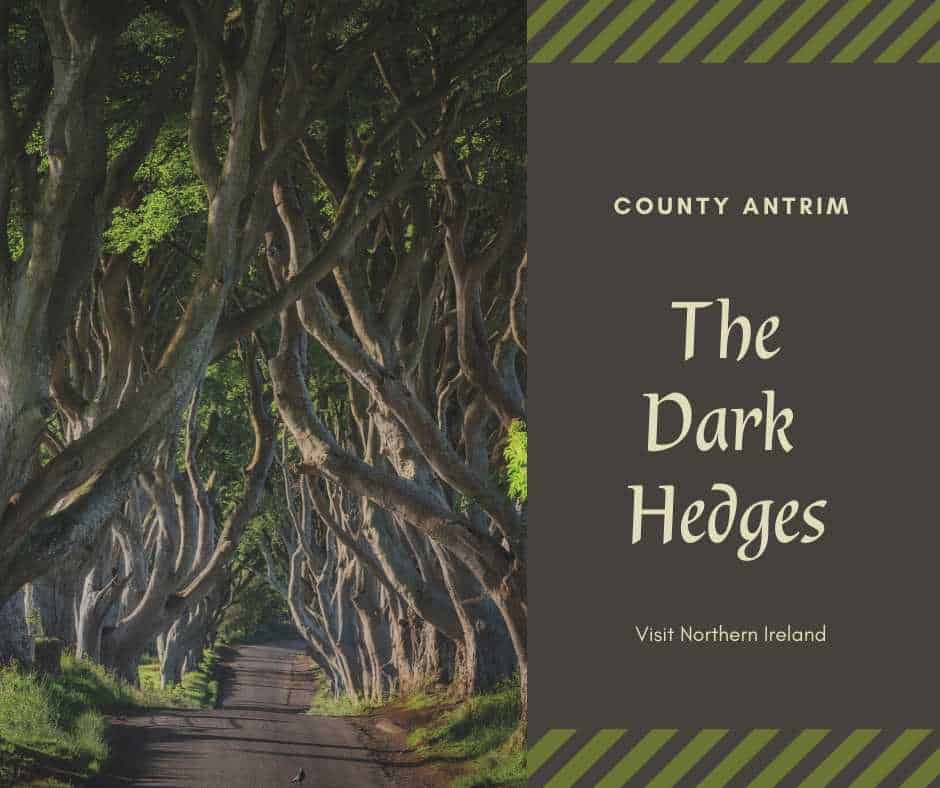 These trees date back to the eighteenth century. The Stuart family planted these rows of beech trees. Their purpose was to create an impressive sight for visitors as they approached the Stuart home, Gracehill House.

These trees have grown and flourished for centuries and remain a magnificent sight. 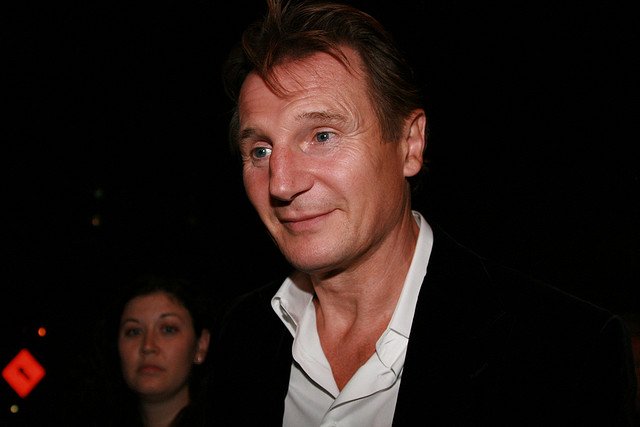 This blog post includes only a few snippets of what Antrim has to offer.

Here are some helpful links if you are planning a trip.

Wishing you all happy travels in County Antrim. 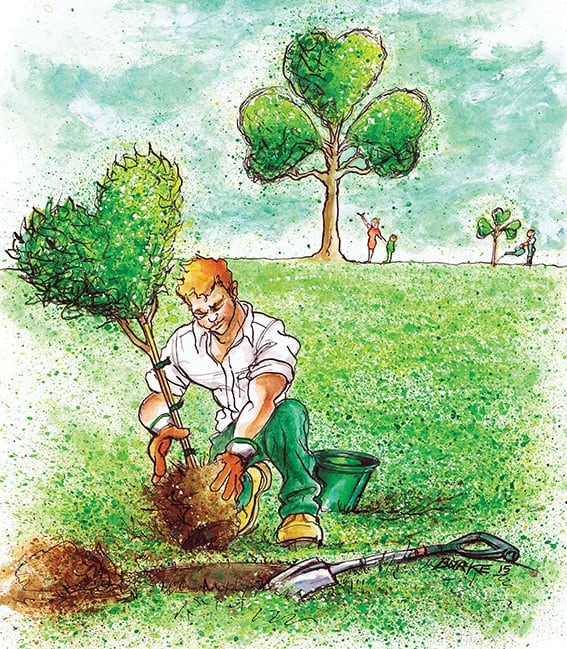 Ireland – A Land of Trees In The Time Of Saint Patrick 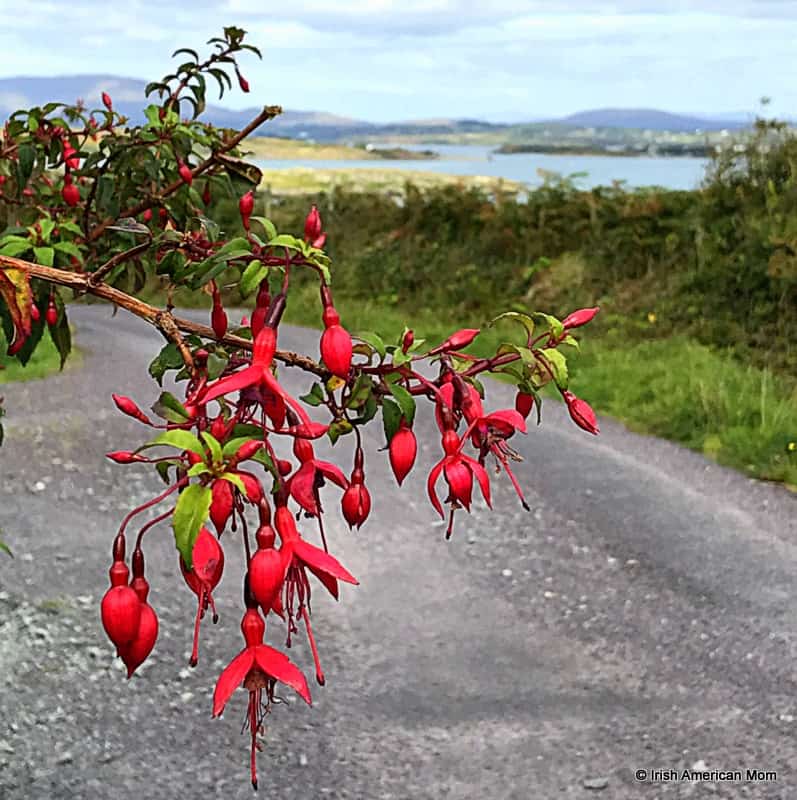 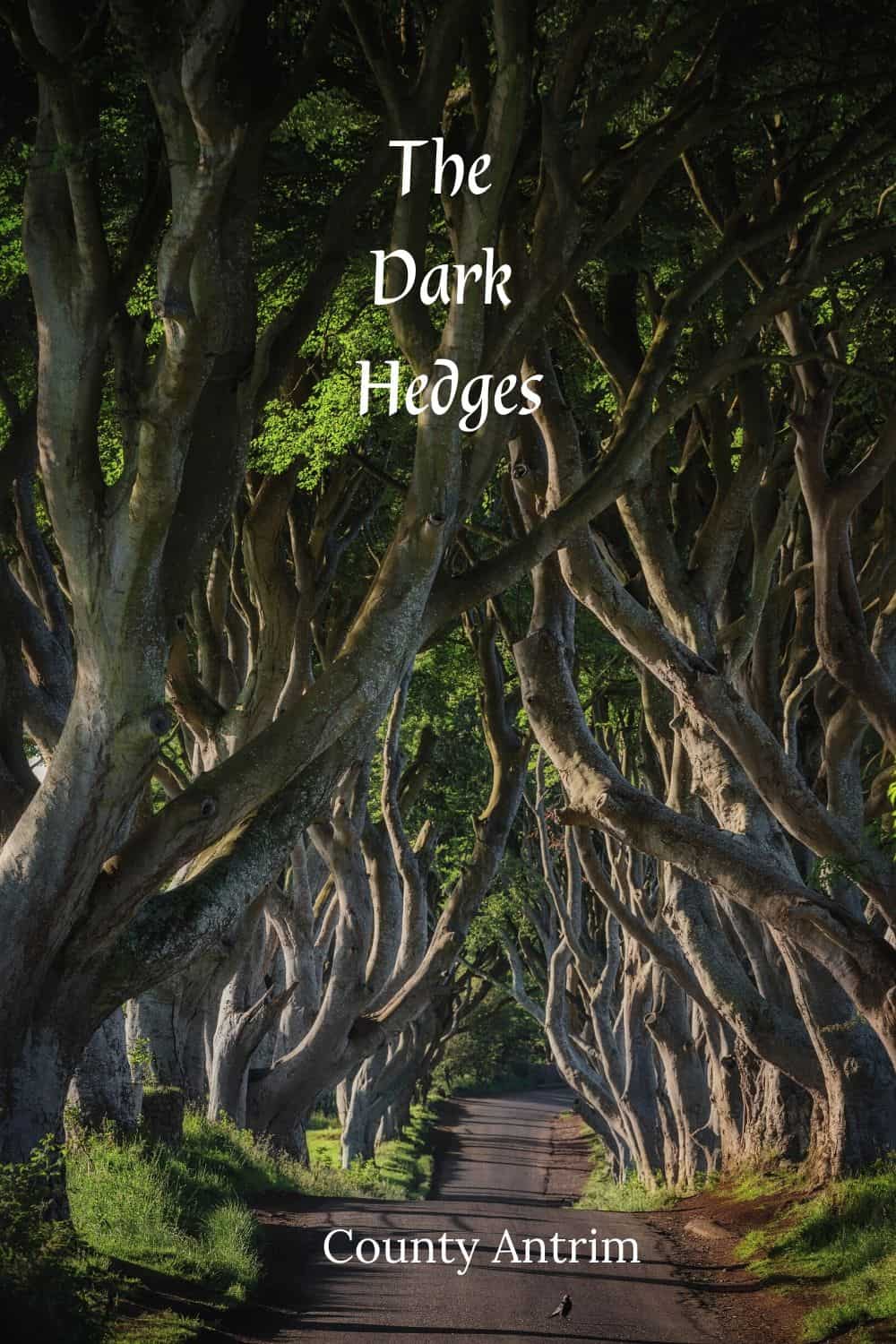