Dublin’s iconic Ha’penny Bridge turns 200 years young this week. The bicentenary of the opening of this ornate, metal, pedestrian bridge was celebrated on May 19th, 2016.

And so I thought today I might share some photos of this magnificent structure that elegantly spans the River Liffey, connecting the north side and the south side of my hometown, Dublin. 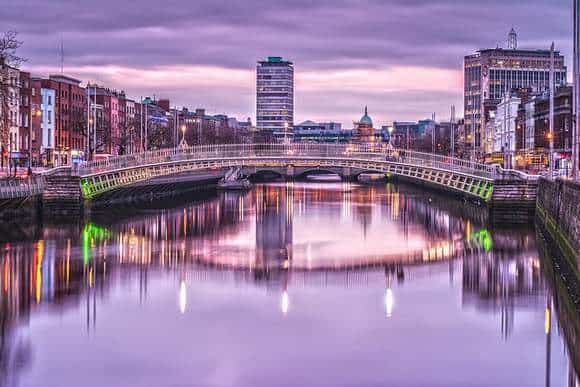 So why not join me as we explore the history of the Ha’penny Bridge and show off its stunning beauty with photos taken from every angle under the sun and the moon.

And believe me, this bridge really is a nighttime beauty. But first a little history…..

A Little History of the Ha’penny Bridge:

The Ha’penny Bridge was first erected in 1816 by William Walsh, a.k.a. “Leaky Walsh.” His dubious nickname referred to the leaky boats he owned to ferry Dubliners across the Liffey from one side of the city to the other.

Leaky Walsh was not so leaky when it came to money. As an alderman of the City of Dublin, he received the grand sum of £3,000 in compensation when his dangerous ferry service was eliminated.

Walsh was also granted a lease on the bridge which ran for a full century, and given the authority to charge a toll for crossing the bridge.

He charged the sum of half-a-penny for the journey each way. Hence, Dubliners came to refer to the bridge as the Ha’penny Bridge. 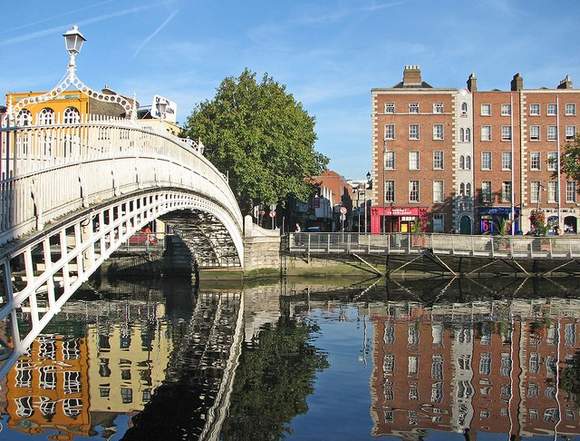 Ha’penny Bridge and Bachelors Walk – A view across the Liffey – © Copyright John Sutton and licensed for reuse under Creative Commons License.

Half -a-penny does not seem like a huge sum of money to us today. But back when the bridge was built it left a fair hole in the pocket of a laborer, who might only earn 6 or 8 pence in a day. In old texts you’ll see this written as 8d. (d. denoted pennies in old English money.)

This half-a-penny toll was the same as the price of a one-way ticket on Walsh’s leaky ferries. And the Liffey is not that wide a river. Walsh would have had dollar signs in his eyes if he ever laid eyes on the massive Ohio River in Louisville, my American home.

For 103 years Dubliners forked over the half penny bridge tax to cross the river at this point. The toll on the crossing was not eliminated until 1919.

A Bridge of Many Names:

Having been born and reared in Dublin, I have only ever known this bridge as the Ha’penny Bridge. In Dublin we pronounce this shortened version of half as “Haypenny.”

As I did a little research to write this blog post I was surprised to learn the “Ha’penny Bridge” is not its legal name.

Officially known as the Liffey Bridge, this boring name was assigned in 1922 when Ireland’s new government was busy renaming streets and structures that bore very English sounding names. 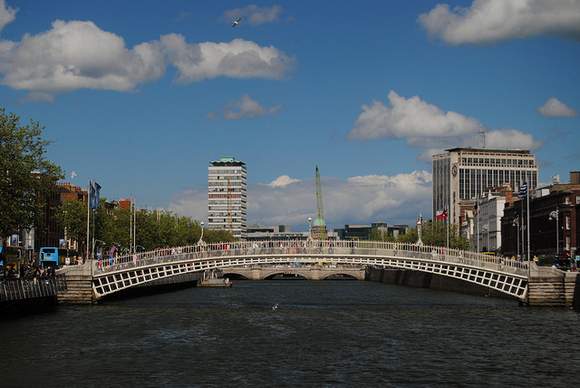 Before that this Liffey toll bridge was named the Wellington Bridge. The year before the bridge opened in 1816, the famous, Irish-born Duke of Wellington had defeated Napoleon at the Battle of Waterloo.

Other names for the bridge were the Triangle, Metal or Iron Bridge.

Iron Structure of the Ha’penny Bridge:

Whatever name this beloved bridge may be called, there is one undeniable fact. It provides a vital pedestrian link across the River Liffey.

In the days when it was a toll bridge, penny pinching Dubliners avoided this crossing as much as possible. Average daily footfall was only about 450. Today, over 30,000 people traverse this structure on a daily basis.

It’s nice to see this first, cast iron, metal bridge ever erected in Ireland has stood the test of time. The ironworks were completed in Coalbrookdale in Shropshire, England, and assembled to span the Liffey in a single elliptical arch. 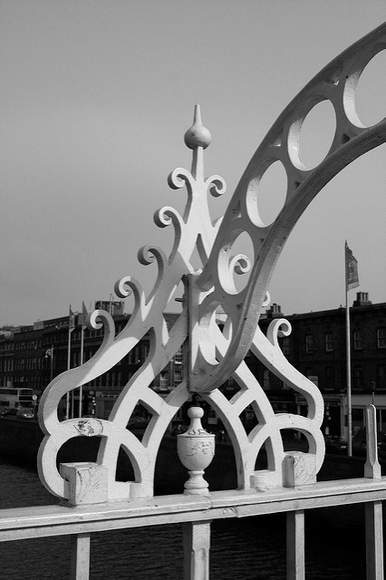 By the turn of the millennium the bridge was looking the worse for wear. In 2001 it was closed for a complete overhaul, with repair and renewal of the cast iron arches and ornate railings.  Luckily the restoration contractors were able to reuse 98% of the bridge’s original cast iron.

The craftsmanship of the iron work is evident to this very day. The quality and durability of Georgian structures is a credit to the workers of centuries past.

And here’s another interesting little tidbit I read in an article published by the Irish Independent yesterday. Believe it or not, the events of the Easter Rising of 1916 may actually have saved this bridge from demolition. 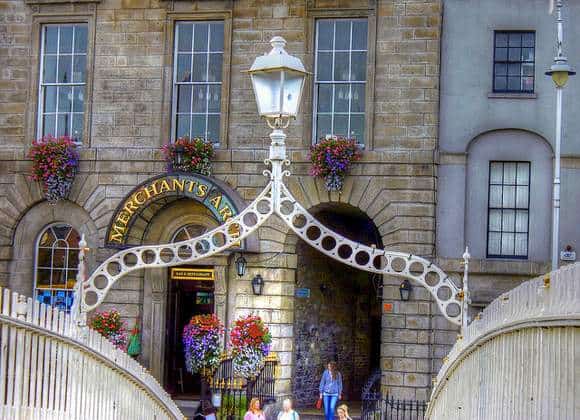 1916 was the year control of the Ha’penny Bridge was handed over from William Walsh’s descendants to Dublin City Council. Some members of the council deemed this bridge to be ugly and discussed plans to remove it.

However, before they could put their demolition plans into action, the rebels of 1916 refocused their attentions to the rebuilding of the many inner city structures destroyed during the Rebellion.

And so, the Ha’penny Bridge survived the events of 1916 and has stood the test of time for an additional one hundred years. Dubliners today cherish this lovely bridge, which is a real beauty, especially at night. 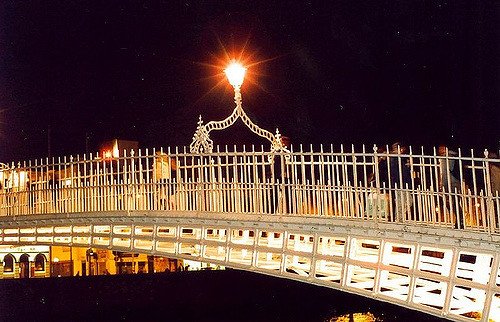 Photographers love to capture this iconic bridge from every angle.

A big thanks to all the generous photographers who shared their photos with a Creative Commons License, allowing writers like me to use their work to illustrate our words. 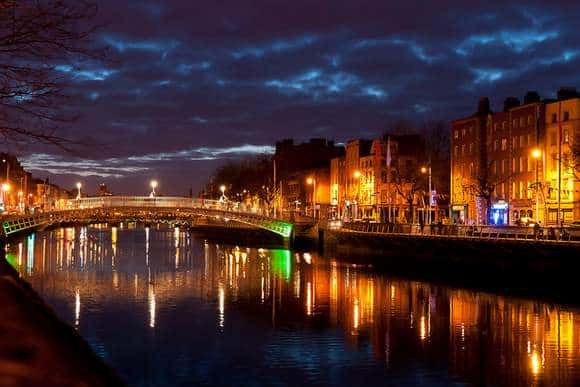 This shot is one of my favorites. The bridge looks so romantic in the evening light.

And I’m not alone in thinking the Ha’penny Bridge looks romantic. In recent years couples have started a new custom of putting padlocks on the railings as symbols of their undying love.

Apparently this tradition originated in Eastern Europe. Lovers inscribe their names or just their initials on metal padlocks, then stroll hand-in-hand to lock them around the railings of the bridge. And here’s the supposedly romantic piece – together they throw away the key into the river, as a symbol of their everlasting love.

Oh please! Give me a break from all this romance. Here’s my lesson in love and romance Irish style. I understand that bridges are deemed romantic and we even explored America’s kissing bridges in a previous post. 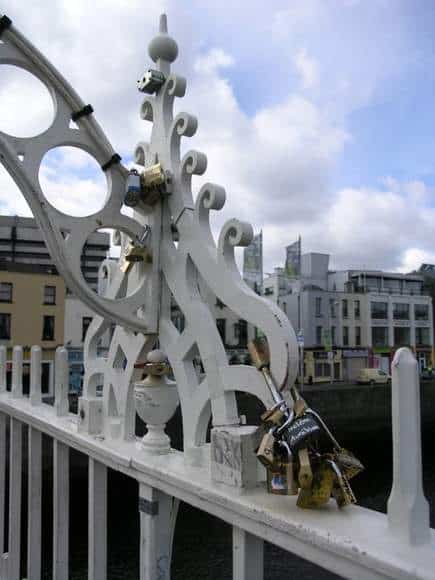 Although I may appreciate the sentiment and symbolism of couples locking their undying love, all I can think about is the damage these locks will do to our historic bridge.

And don’t start me on the cost of cutting the locks off the bridge. Imagine if left to accumulate on the railings, the poor bridge would collapse under the weight of all those heavy metal locks.

And don’t even think about throwing the lock and key into the river. Any of our hardy Liffey fish don’t need metal poisoning.

And so, here’s my romantic advice. Give each other a hug and a kiss on the bridge, swear undying love, but lock your locks at home.

And so there you have it. A little ramble over and about Dublin’s iconic Ha’penny Bridge, with a little romantic rant thrown in for good measure. 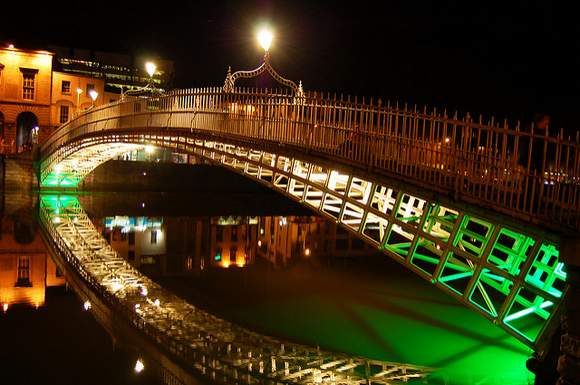 And so, all that’s left to do is to wish this iconic symbol of Dublin and Ireland a very happy 200th birthday.

Dubliners grew to cherish their Ha’penny Bridge, once the dreaded toll was removed. So here’s hoping it will stand the test of time, and span the Liffey for centuries to come.

If you enjoy reading about Dublin then you might enjoy these posts.

The History of Dublin’s Famous Molly Malone Song and Statue

A Dip In The Forty Foot – A Dublin Christmas Tradition 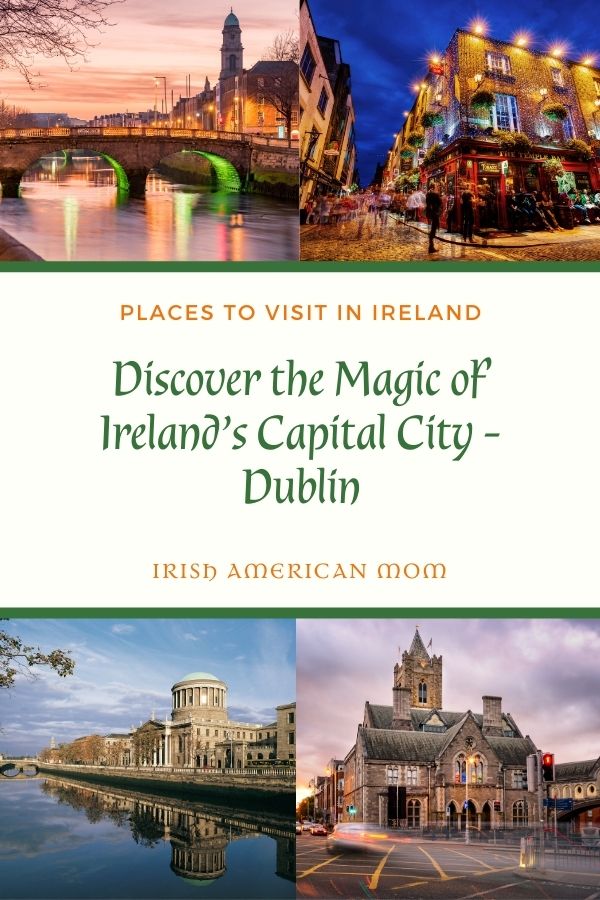