Kale is delicious when pan fried with onions and garlic and garnished with crispy bacon bits.

Kale is a winter vegetable that grows well in Irish soil. It’s a traditional Irish vegetable and dinner ingredient. In years gone by it was widely used in the diet of rural Irish people.

It’s most famous when paired with mashed potatoes for a signature Irish dish called colcannon.

Kale fell out of favor in Ireland in the 1960’s and 1970’s and was often demoted to the role of cattle fodder. The humble turnip or rutabaga was also primarily deemed as food for cattle.

However, the fortunes of these veggies have greatly improved in recent times. Kale, the leafy green Irish vegetable of winter, is now considered a super food.

Kale As A Superfood

Yay for kale! A true super food with a diverse profile of vitamins and nutrients.

Boasting a wide array of vitamins including vitamin A, B’s, C and E, kale also adds minerals, fiber and omega 3 fatty acids to out diets to boost our brain power. And trust me, I need everything I can get my hands on to keep the wheels and cogs of my aging brain in motion.

It’s also a great source of antioxidants and other micronutrients.

It’s wonderful to know kale is such a nutritional power house. My husband is a good vegetable eater, but the varieties of vegetables he likes tend to be what I call Irish vegetables – carrots, parsnips, broccoli, cabbage, rutabaga or turnip and, of course kale.

No fancy egg plants and zucchini on our Irish dinner menus, except when he’s away for work. That’s when my daughter and I go all Mediterranean in our veggie selections and Tuscan kale becomes our kale of choice.

Kale As A Component of Colcannon

Kale is a favorite Irish green leafy vegetable and it features in Irish colcannon, a dish closely associated with Halloween and some superstitions surrounding the foretelling of romantic fortunes.

Folding kale through mashed potatoes for colcannon is a great veggie guise and might entice some fussy eaters to give this nutritious veg a try.

So far, I’ve only succeeded in convincing one of my four offspring to give it a go, but she licked her lips and asked for more.

My three boys will be the death of me yet, with their incalcitrant objections to all things veggie. But I’ll keep trying, and hopefully one day they’ll ask for seconds when I serve them a favorite Irish veggie side.

Kale has a very strong flavor profile. As a child I found it a little overwhelming, but now as an adult I can’t get enough of the stuff.

Cooking vegetables in Ireland in the 1960’s involved boiling them till they became totally mushy. In recent years the power of pan searing our favorite veggies has come into vogue, thank God. More goodness is preserved with pan sautéeing, rather than letting all the wonderful vitamins leach into boiling water during cooking.

My granny would talk of the importance of winter greens, when I was young. Back then, I never realized the wisdom in her words and old Irish ways. Knowledge from many generations was passed down through customs and traditions which were expressed in simple utterances, just like when my granny said she craved winter greens when the weather turned cold.

In centuries past the variety of kale grown in Ireland was often called cottier’s kale or cottager’s kale. Let me explain where this name comes from.

In the years before the Great Irish Famine, there were many cottiers living in rural Ireland. Over 40% of the population lived in poverty. A person, who received a simple dwelling and a small plot of land of about one acre in return for work, was known as a cottier. The word is very similar to cottager.

Their employers were usually Irish tenant farmers with a lease on a relatively large plot of land, usually between ten and thirty acres. In return for an agreed upon number of day’s service in the fields or helping around the farm, the tenant farmer gave an acre or two to the cottier to grow potatoes and vegetables, and to provide grazing for a cow. Cash was rarely exchanged in this barter of land for work.

Another thing often shared was cuttings and seeds for vegetables. Cottier’s kale grows from cuttings not seeds. Slips of kale were passed from one cottier’s garden to another, hence the name. It was often referred to by the name “cut and come” because it was so easy to grow from a cutting.

Another name for cottier’s kale was “hungry gap.” This is because kale was in season during the 6 to 8 week period in early spring when winter produce was running low and there was still some time to wait for the summer crops to be ready. This difficult time usually coincided with Lent, and the perennial kale was christened “hungry gap” since it kept many a cottier or cottager alive during these lean times.

In her wonderful book, Grow, Cook, Nourish: A Kitchen Garden Companion in 500 Recipes, Darina Allen of Ballymaloe, discusses these many names for kale in Ireland. Thank you to Darina for all her wonderful research and knowledge of traditional Irish cooking.

Other varieties of kale grown in Ireland include curly kale, and Tuscan kale (aka Lacinato kale or dinosaur kale).

For today’s recipe I like to use regular kale (cottier’s kale) or curly kale.

And so, without further ado, let’s get on with our recipe tutorial and learn how to pan sear kale to perfection, with onions, garlic and bacon for extra flavor and goodness. This is one of my all time favorite kale recipes.

Here’s a quick list of what you’ll need for this easy sautéed kale recipe. Check out the printable recipe at the bottom of this post for US and Metric equivalent versions. There you can choose the measurement system that works best for you.

This recipe works best using regular kale and curly kale, but if you only have Tuscan kale it works out fine too. The Tuscan kale leaves tend to wilt more in the heat of the pan so they don’t retain their structure as much as the other varieties of kale.

You can use regular bacon slices, or thick-cut bacon if you really like a meaty addition to your side dish recipes.

Directions For Cooking Kale In A Skillet

Here you’ll find step-by-step photographic instructions to help you recreate this recipe successfully. There are plenty of tips included along the way. Plus you’ll find the printable recipe right at the bottom of this post.

First step is to cut the bacon strips into pieces or lardons. You can use pre-cut bacon lardons, which are sold in most grocery stores.

Place a large skillet on the stove top over medium heat. Add the oil and let it heat fully before adding the bacon. You want to hear a nice sizzle.

Adding a small knob of butter to the oil is optional, but I love the extra depth of flavor a little Irish butter adds to this veggie side.

Once the bacon has fully browned and cooked crisply, remove it to a plate lined with paper towel. Allow the bacon to drain and set it aside while the onion and kale are cooked.

Next, it’s time to prepare the onion.

Dice the onion into fairly small pieces. This dish is best if the onion pieces are not too big.

Add the onion to the skillet and sauté until softened.

Remove the hard stems from the kale and chop or shred it into small pieces. Wash it in a colander by placing it under cold running water.

Place the chopped kale and garlic in the skillet and stir them into the onion.

Cook until the kale is softened, which takes about 5 minutes.

Before serving, sprinkle the kale, onion and garlic, with the cooked bacon.

You may wish to add some freshly ground black pepper as a garnish, or red pepper flakes give this dish a little kick.

This recipe is delicious with ham, or chicken or turkey. In fact it’s good with most meats and I love it with roast pork or chops.

This versatile vegetable is a nutritious and easy to prepare side dish. 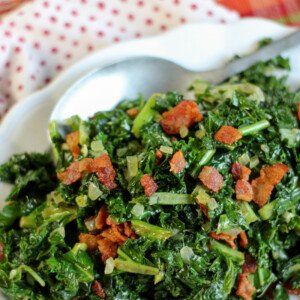 Kale Sautéed With Bacon And Garlic

I hope you enjoy this recipe and learning about how the Irish grew kale in years gone by.

Here are some other side dishes you might enjoy…

Here are some other recipes and ramblings from Ireland, which you might enjoy…

If you’re a Pinterest fan, here’s a graphic to add to your boards.