×
Home » Lessons for Tourists » Land and Culture » Knocknarea And Queen Maeve of Connacht.

Knocknarea dominates County Sligo’s skyline, and together with Ben Bulben, these two peaks are the most striking landmarks in the entire county. 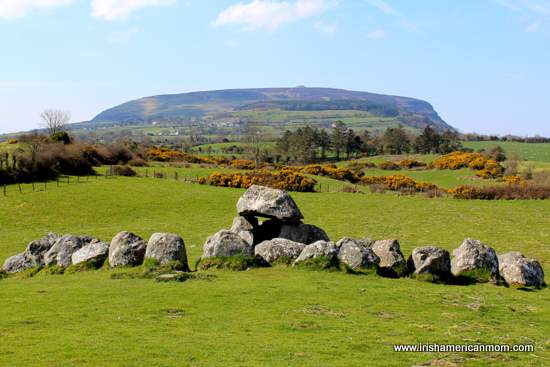 Today I thought it’s high time for a scenic interlude, and what better subject matter or mountainous model could there be for a blog post, than the magnificent Knocknarea in County Sligo.

So why not join me, on a tour of Knocknarea, a perfect spot for a little mid-week Irish intermission.

A Mountain With A Cairn At The Top

In the photo above look directly over the dolmen and you’ll just make out a little mound which is in fact a massive stone cairn. 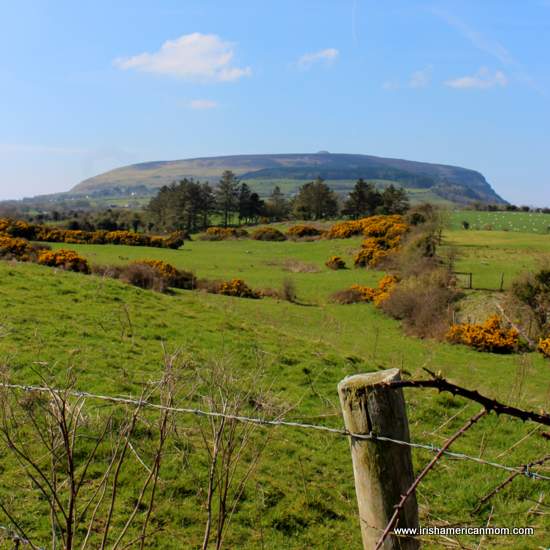 Maeve’s cairn is a little more clearly defined in this photo.

Yeat’s wrote that “the wind has bundled up the clouds high over Knocknarea”, but I was lucky on the day of my climb, there was hardly a cloud in sight.

This beautiful summit was so named since it is said the ancient Kings of Connacht were once crowned on its peak. 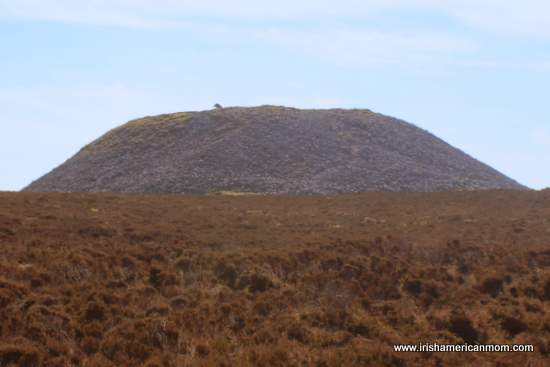 But nowadays it is better known as the hill of Connacht’s greatest queen, the legendary Queen Maeve.

Her grave or cairn is called “Miosgán Meabha”. The cairn’s circumference is 600 feet, and its height is 34 feet. It’s estimated there are about forty thousand tonnes of stones piled high atop this mountain in her honor, proving she was a woman of immense power.

Maeve is supposedly buried here standing up in a warrior’s stance. Now it’s totally up to you whether or not you want to believe this tale or take it with a pinch of salt. The cairn has never been excavated, so we may never know.

Local legends say it is good luck to bring a stone up the mountain to place on the cairn, in remembrance of Ireland’s warrior queen, but whatever you do, don’t touch a stone. It’s bad luck to take one away with you. 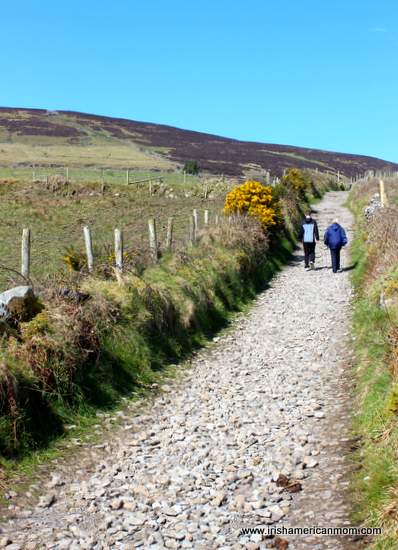 Tourists and locals can hike to the top of the hill to pay their respects to Maeve or to drink in the views that await after their stiff climb. 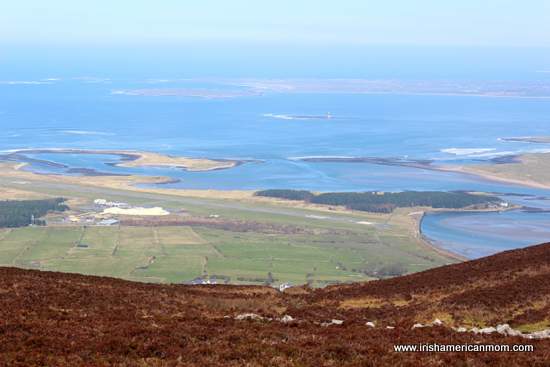 I huffed and I puffed all the way up, but don’t worry I didn’t blow the cairn down.

On a clear day you can see for miles, and drink in the beauty of County Sligo. The panoramic view Queen Maeve will witness on the Last Day is hard to beat. 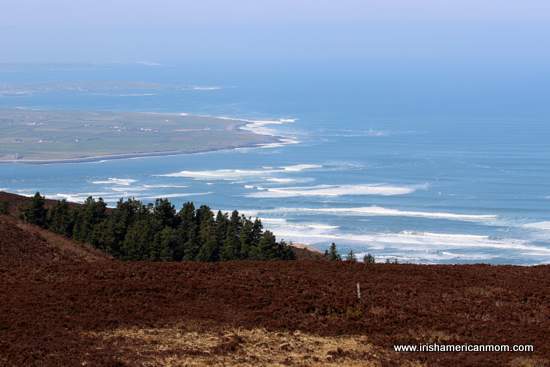 Looking towards the west and the village of Strandhill, waves crash against the rocky shoreline, finishing their journey all the way from America. 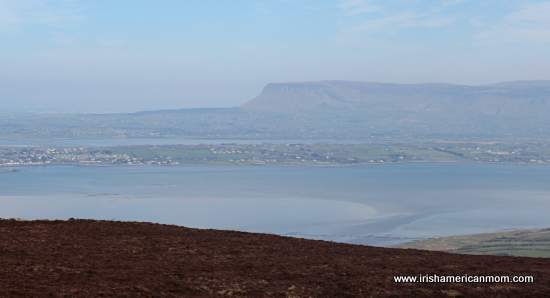 Away to the north Ben Bulben stands proudly. The beautiful rivers, lakes and woodlands surrounding this idyllic spot make it clear why the wily Maeve chose this mountain as her last resting spot. 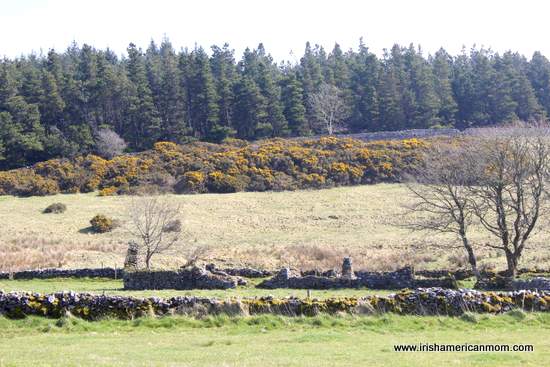 On the way back down I noticed this old ruin.

Every time I see the crumbling walls of an old cottage I say a little prayer for the folks that once lived there. 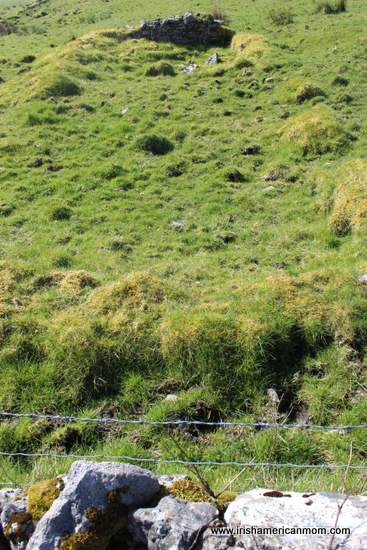 My hubby noticed this outline in a field on the side of the mountain.

These ridges are all that remains of a little stone cottage from days gone by. 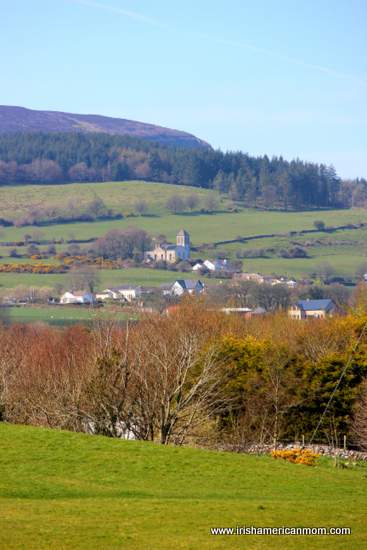 This church on the southeastern side of the mountain is truly picturesque. 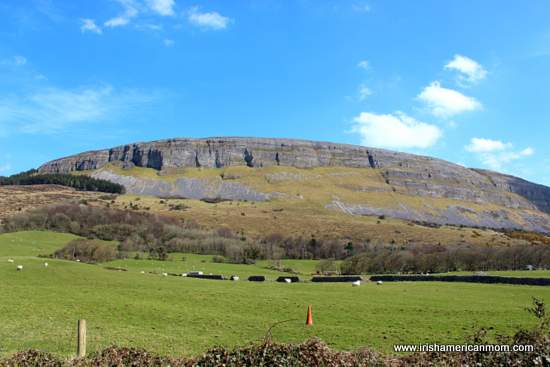 The western side looks over the beautiful village and beach of Strandhill. 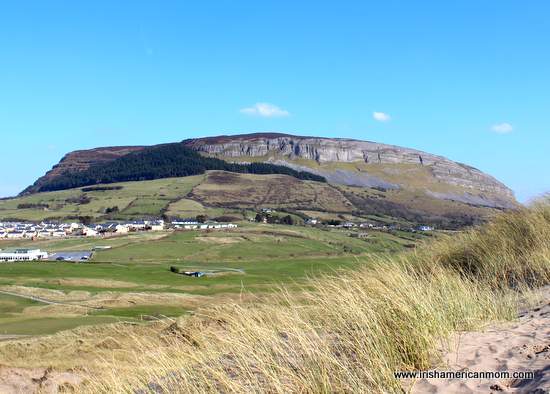 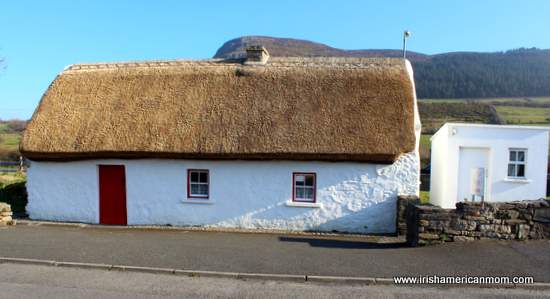 Dolly’s Cottage has stood for 200 years in Strandhill, nestling at the foot of Knocknarea. 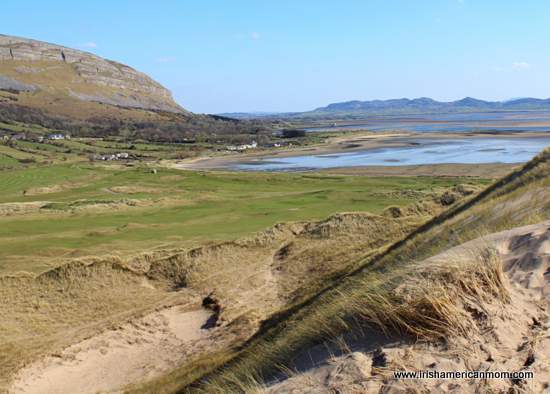 The mountain looks over some of the most splendid beaches in all the world. 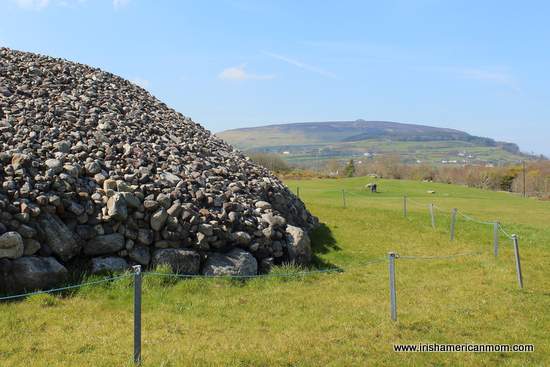 Thousands of years have passed since Ireland’s first inhabitants arrived here. I’m happy to say many of the tombs, stone circles and fortresses they built still remain to this very day. Walking through this unspoiled countryside you feel inspired and invigorated by the ancient past.

I climbed Knocknarea over forty years ago with my grandaunt. I remember listening to her stories of ancient warriors and proud, strong women.

As I climbed Knocknarea once again I revisited fond memories of my childhood, following in the footsteps of Queen Maeve and my late grandaunt. Of course I recounted her tales to my children, introducing them to Ireland’s brave queens and mythical heroes.

Share my recipes and ramblings with the world
11
11
Shares
11
Shares
11
« Irish Primrose Superstitions And Lore
If I Were A Lady …. I’d Wear A Hat »