The thatched roof cottage with whitewashed walls is a powerful symbol of Ireland, often featured on postcards. This quaint, traditional image immediately represents Ireland for many people throughout the world.

I love thatched cottages so I made a short video to accompany this blog post, as a tribute to the rural homes of my ancestors. I hope you enjoy it ….

Every time I see one on television, on the internet, or smiling at me from the pages of a magazine, I think of the “old place” in County Cork. That’s what my father calls the thatched house where he grew up. 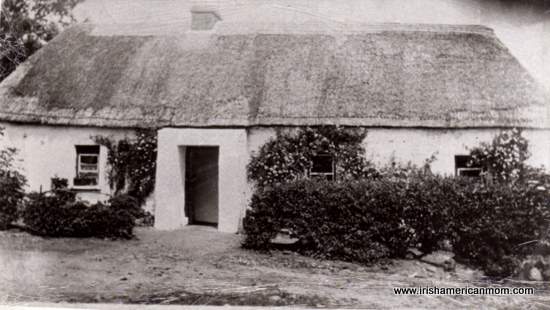 “The Old Place” – the house where my father grew up in County Cork.

I’m afraid that house now lies in ruins, but I’m happy to report there still are about 2,500 thatched cottages dotted around the Irish countryside.

Today’s post is dedicated to these iconic symbols of Ireland.

The Irish thatched cottage is based on a simple rectangular plan.

The walls were built with stones found locally, pieced together in interlocking fashion, then covered with a mud plaster before being white washed. As you all know, there was no shortage of these stones in the west of Ireland. 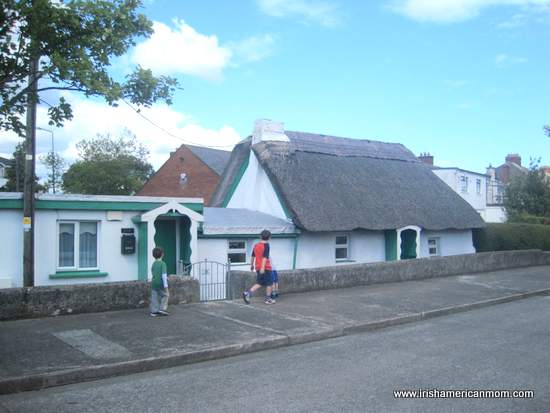 Cottages were usually built with a door to the front and back, and usually oriented to the north and south.

It has been said that these two doors were necessary to prevent mother-in-laws and daugher-in-laws from using the same door. Many sons brought their new brides home to live beneath the thatch with their beloved mothers, and peace did not always reign. 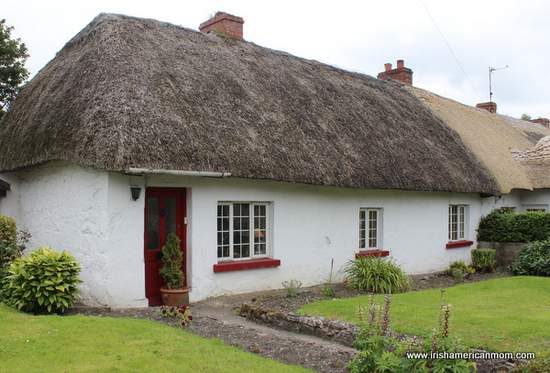 Separating the women was one good reason for this door positioning, but the most likely reason was to ventilate the room.

Burning turf was smoky business and not all chimneys were up to the task of keeping a small room smoke free.

Irish thatched cottages boasted few windows. This helped limit heat loss in winter and kept the interior of the cottages cool in the summer months.

However, one of the main reasons for this limited number of windows was the infamous “window tax” imposed by the British government from 1799 to 1851.

This ludicrous tax was imposed on any homeowner whose house had more than six openings. This penalty came to be called the “typhus tax” because of the increased incidence of respiratory problems related to poor air quality in these thatched cottages. 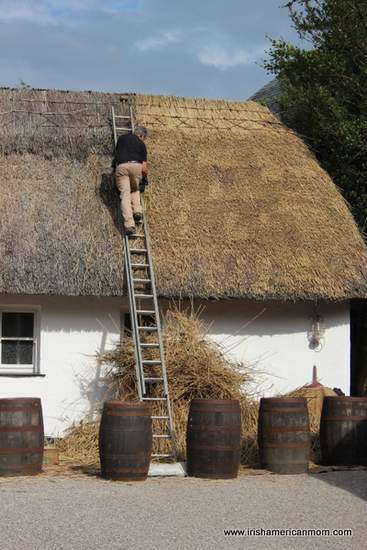 The thatched roof is the feature we associate most with the Irish cottage. A skilled thatcher uses domestic cane to create these beautiful roof lines. 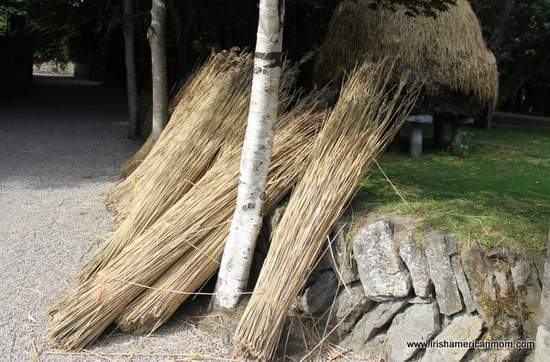 This cane plant grows well in moist soils, in temperate and fresh climates, making it easily available in Ireland. 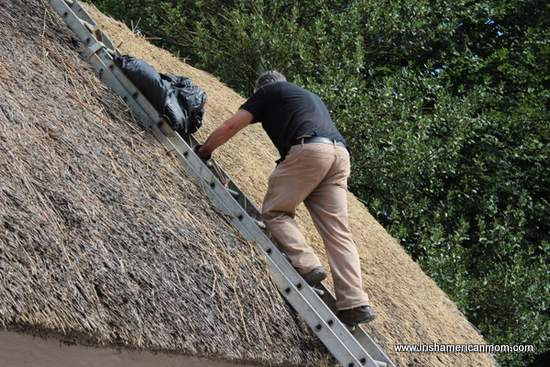 In years gone by sods of turf were placed beneath the thatch to create a layer of insulation.

Today, a layer of aluminum has replaced the turf layer as a fire precaution.

A Bit Of History:

The Irish census of 1841 reported that 40% of the population lived in a one room cottage.

That meant about 3 and a half million people were cramped into tiny, dark, smoky rooms. 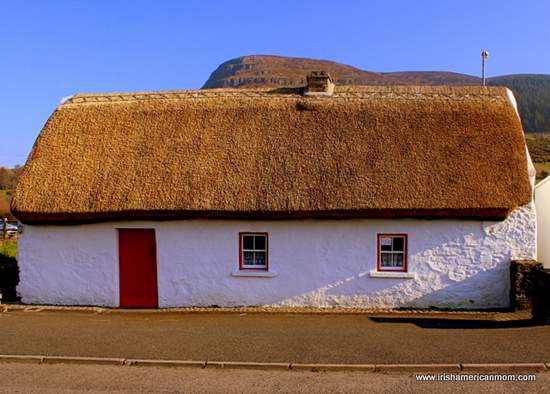 Not only did most families have six or seven children, they also shared their living quarters with a pig, and a dresser full of hens or chickens. Not exactly the cozy, romantic thatched cottages we have grown to love. 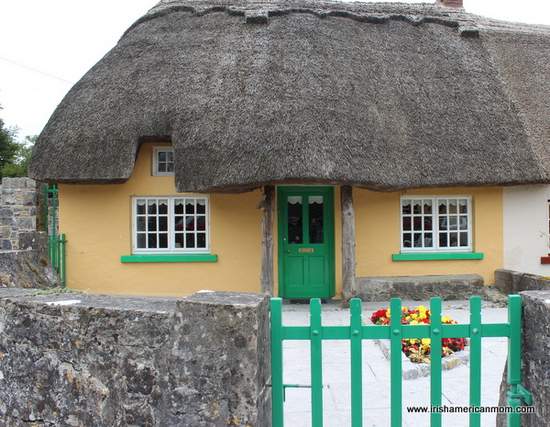 Our Irish ancestors who were thatched cottage dwellers did not own their homes. They built them with their own hands, but they did not own the land upon which they were built. 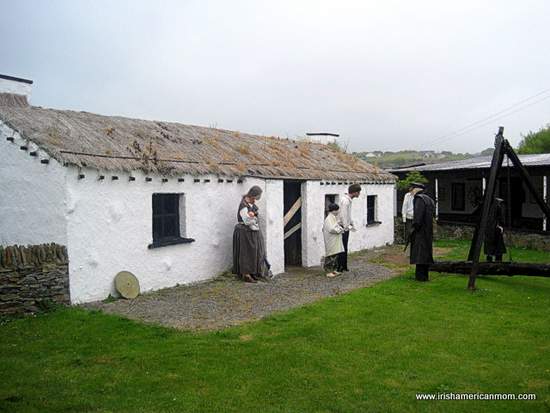 Rent had to be paid to a landlord, or sometimes to a middle man, who subleased lots from a bigger plot of land he controlled.

Money was not always exchanged in lieu of rent. Cottagers often paid their land rent by working in the fields, or wherever they were needed.

If work was in short supply the cottagers were at the mercy of their land owner, and eviction sometimes ensued. 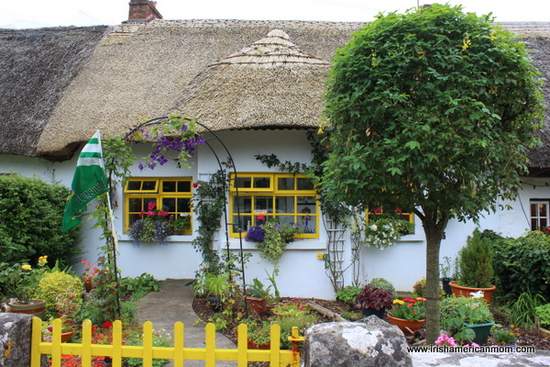 A Little Piece Of Our Heritage:

Many of Ireland’s surviving thatched cottages are privately owned, and I wish to express my gratitude to those who are preserving these cottages, recognizing that they are an important piece of our Irish heritage. 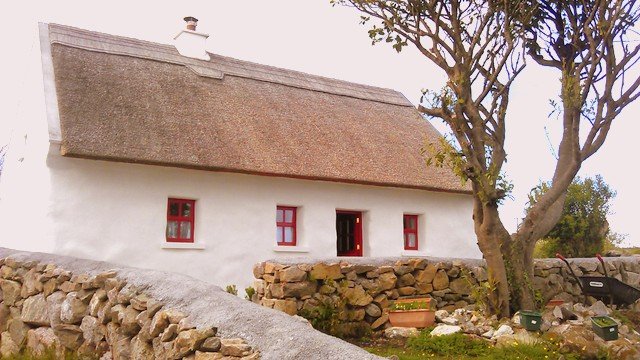 But ownership of these cottages poses some challenges. Insurance premiums are significantly higher than for houses with regular tile roofing. Underwriters believe a thatched roof poses a greater risk of fire.

I hope the Irish government recognizes the importance of preserving these little cottages, as a national treasure, and a piece of our heritage that must be handed down through the generations. 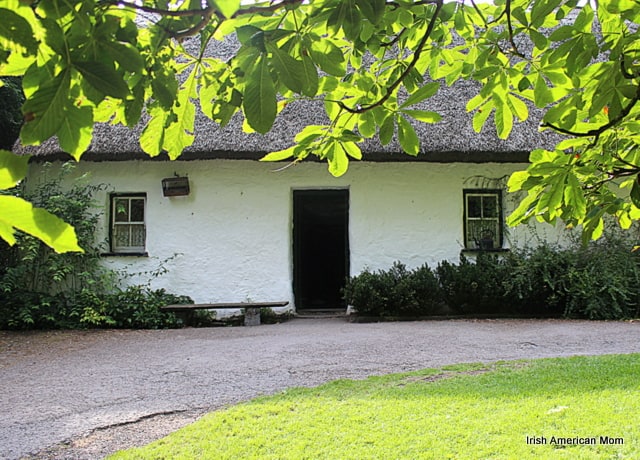 The thatched cottage may be a romanticized symbol of Ireland, but if they were to vanish, we would soon realize their importance. I hope that day shall never come.

I hope you enjoyed this little collection of thatched cottage images from around Ireland. 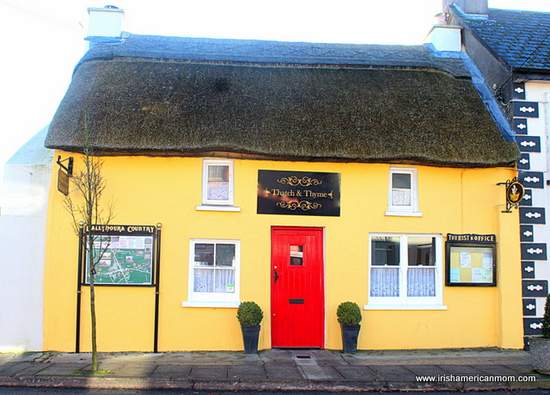 Can’t you just picture smoke meandering from the chimneys in lazy spirals, or perhaps you would enjoy leaning on a half-door watching the sun set over the Atlantic? 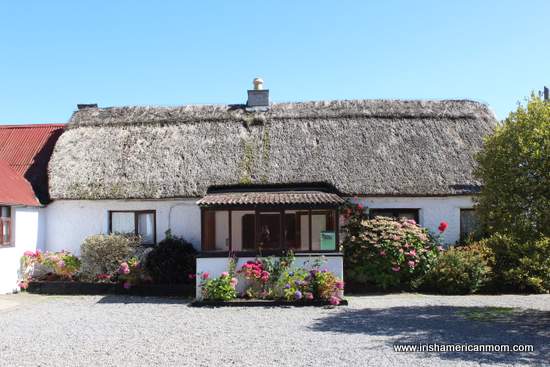 These pictures of warmth and coziness,  must surely have been the dream of home every Irish emigrant carried in his or her heart to America.

I hope these thatched roof cottages with whitewashed walls will always be a feature of the Irish countryside for centuries to come.

If you’re interested in thatched cottages and their preservation you may enjoy following the @irish_thatch Twitter account. Robert Hayes-McCoy owns one of Ireland’s few remaining centuries-old mud walled thatch cottages. Become a follower to enjoy pictures and news about Irish thatch. 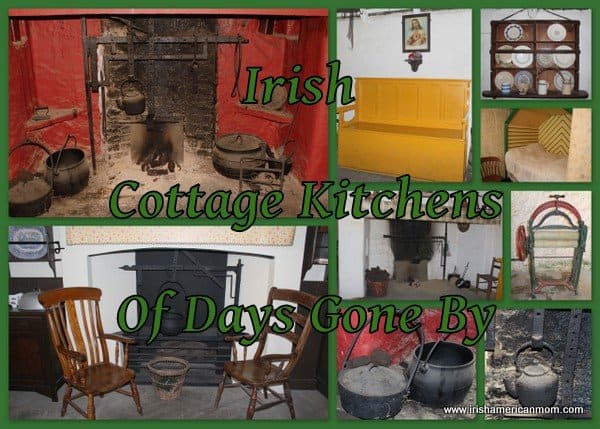 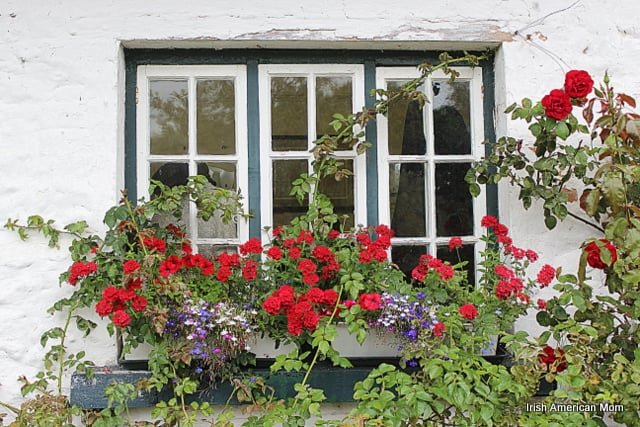 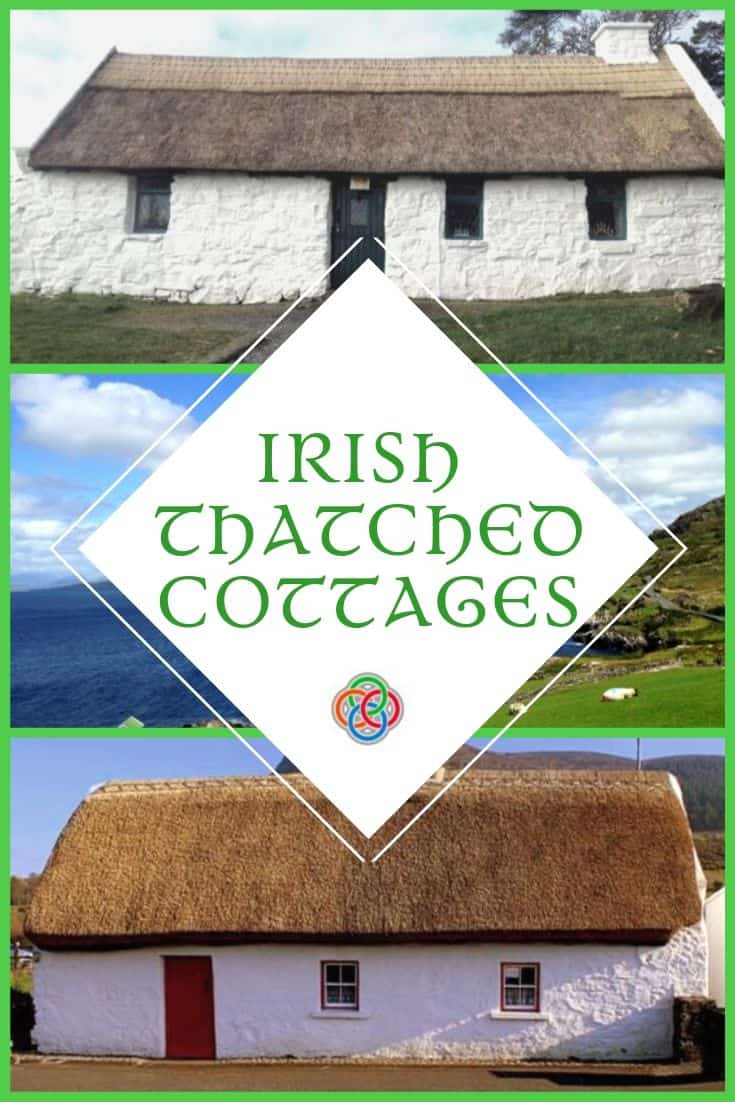 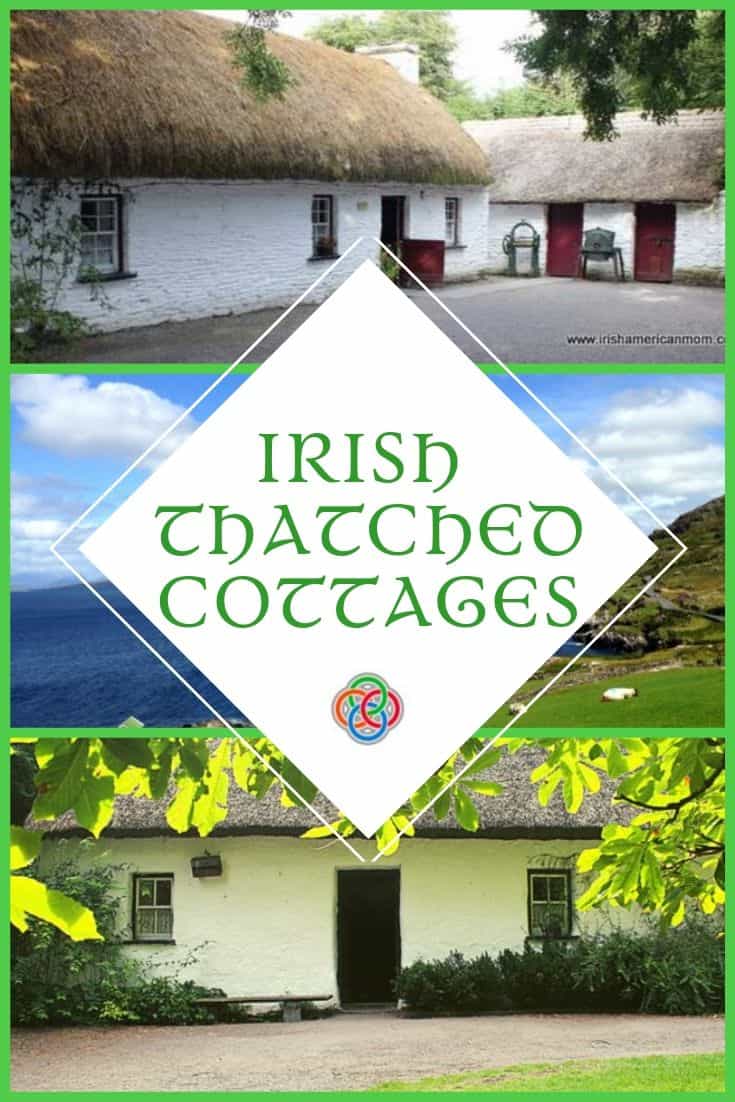